Good news for flooded out northwestern Ontario. Lake of the Woods water levels continue to drop Clarion hotel on Kenora waterfront on Lake of the Woods. The Lake of the Woods Secretariat said it expects the lake level to drop by up to 10 centimetres in the coming week. Photo: Jody Porter/CBC

The water level on Lake of the Woods continues to recede following major flooding in spring and early summer.

In its latest update, the Lake of the Woods Secretariat states the lake level declined by six centimetres over the past week, and is expected to drop another eight to 10 centimetres in the coming week.

High water levels, caused by heavy rainfall and thick snowpack leftover from the winter months, in the region led to major flooding in some areas in spring and early summer, including Sioux Lookout, Kenora, Fort Frances, Red Lake, and Marten Falls First Nation.

Meanwhile, water levels on other regional lakes continue to decline, as well. On Eagle Lake, located east of Lake of the Woods, water levels also remain high, but have dropped significantly.

Gord Bastable, owner of Vermilion Bay Lodge, which is located on Eagle Lake, said water levels in the spring and early summer were higher than he'd ever seen in his 30 years on the lake.

"It was extremely high going into spring and before we opened," he said Tuesday. "I ended up canceling my first week of the season and moving those people into the second week." 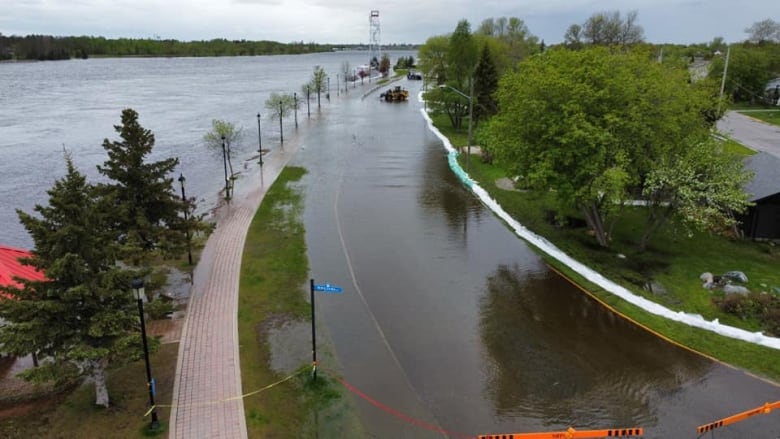 Water runs up over the walkway and a road along the Fort Frances riverfront in this drone photo from earlier this spring, when flooding was at its worst. Photo: Nathan Calder/Facebook

"High water was one of the reasons, but for us it was mainly dock issues," he said. "Some areas where we normally park trailers and have a campfire area, those were all underwater, but the docking was the main concern."

Bastable said the lodge didn't suffer any serious damage, however.

"Recently we've upgraded to all floating docks," he said. "So that made a big difference in terms of things getting damaged."

As for the future, Bastable said he's hoping the flooding was a "one-off situation," but he's considering making a change that could help mitigate future flooding.

"One of the issues I had with high water is normally my docks are well protected from waves because of just the nature of the shoreline here," he said. "But with the really high water, I kind of lost that protection on parts of my docks."

"It's possible I might consider maybe getting permission to add a bit of a breakwall in front of those areas," Bastable said. "That would help."

To see the original article and see related stories, follow this link to the CBC Thunder Bay website. https://www.cbc.ca/news/canada/thunder-bay/northwestern-ontario-flooding-update-1.6538976