When your home is filled with hazards, what can you do? Poor housing conditions can have an effect on people’s health both mentally and physically by posing a threat to the family or individual living there, especially for young children and babies.

The health and wellbeing of residents are impacted especially in areas where there’s both industry and older housing. The older a home gets without reparations the more prone the residents are to illnesses. Around 80% of the housing units in Detroit were built before 1960. And numerous other cities around the Great Lakes are no different. The placement of industry around a lot of homes throughout the Great Lakes region leads to heavy truck traffic as well. 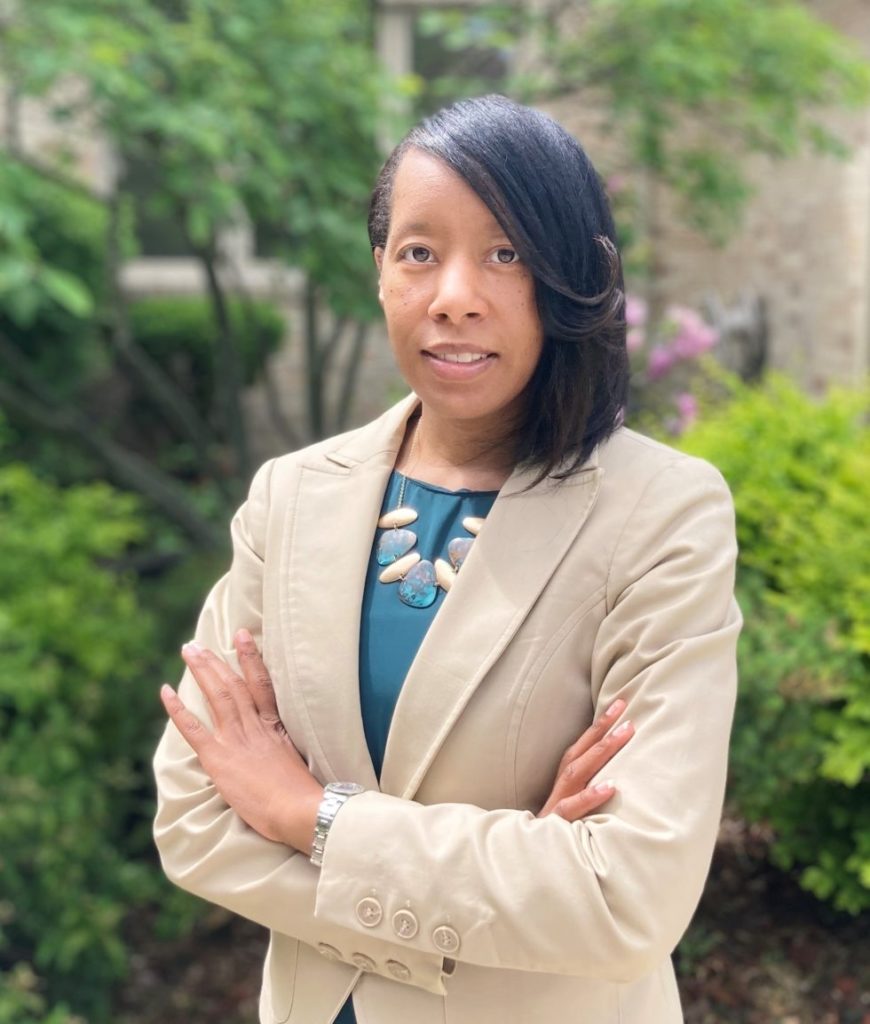 “If you think about older housing, we can think of it as a sort of weatherization,” said Laprisha Daniels, the executive director of Detroiters Working for Environmental Justice. “If you have windows that are older or if the seals around your doors are older, that pollution from industry is getting in. That noise pollution is getting in. So it’s hard to separate housing from some of these other issues.”

The age of housing in these cities has led to legacy problems like lead paint and lead water service lines, which have been a high-profile threat to the people’s health. When ingested or inhaled, lead poisoning can cause a variety of neurological and developmental issues. Flooding and heat are a few other issues with housing. Many homes aren’t built to withstand the current climate change-fueled heat waves or extreme weather and flooding.

“If you talk to residents then you’ll hear more about how some of the blight impacts mental health as well,” Daniels said. “There’s a lot of abandoned homes, there are a lot of vacant lots. Because of those two things there’s a lot of illegal dumping and so just being in an area that is not aesthetically pleasing contributes to poor mental health among residents as well.”

There are resources out there to make these homes a healthier and safer environment for families, but those aren’t always accessible to people.

When it comes to removing lead service lines and holding industries accountable to regulations and for their chemical emissions, action must happen at a higher level. But federal action might come too late for some households.

“There are still folks in Detroit and beyond across this country that have not received support or recovery funds from federal agencies and state agencies, because the process is not very clear and not very accessible,” Jalonne White-Newsome, CEO and founder of Empowering a Green Environment and Economy, LLC, said in an interview with Great Lakes Now. “And in some cases, in many cases, it is intentional, it is racism, it is institutional barriers.” 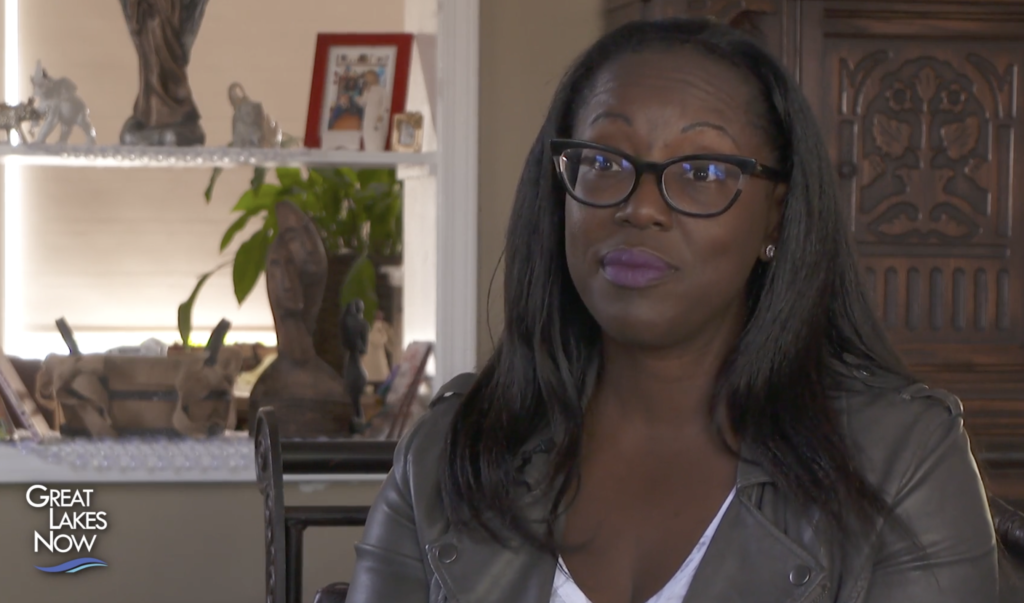 Jalonne White-Newsome is a native Detroiter, and the CEO and founder of Empowering a Green Environment and Economy LLC—a community- and climate-focused consulting firm. Photo Credit: GLN

“I hope it isn’t intentional,” she added, “but sometimes it can feel that way.”

Lack of internet access as well as the majority of information on resources being in English can also be large barriers for people looking to the government for help.

Great Lakes Now compiled a list of some small actions that individuals can take around the house to help mitigate the impacts of some of the more prevalent housing hazards.

Lead paint is at its worst when cracked or peeling, because it creates lead chips and dust that can be inhaled by people in the home and even swallowed by young children and babies.

Painting over lead paint can help, because it can cover the peeling paint and minimize lead dust in the air, lowering the risk of children touching and eating it.

If you aren’t able to paint the home and are concerned that a child may be eating chipped paint, you can rearrange your furniture to block and cover up the spot where the paint is chipping or peeling.

“This is a quick fix,” Daniels said. “If you’re concerned that you have a young person in the home that is eating the paint, you can move furniture in front of it. If it’s in a child’s bedroom, then move the dresser in front of the area so the child doesn’t have access to it.”

Where there has been a flood or constant floods beware of mold spores growing in and around that area. Flooding can also cause many structural damages to the home, ruined furniture, and introduce harmful bacteria.

After a flood, pull up carpeting to check for mold. Mold exacerbates higher asthma rates, especially in children.

“If there’s carpeting, pull that up and make sure that there aren’t mold spores so you’re not exacerbating asthma or other respiratory illnesses, or those things aren’t developing now because there are mold spores in the home,” Daniels said.

In addition to asthma, it causes problems like insomnia, memory loss, runny nose, headaches and fatigue.

If mold is in the home, make sure to use bleach water to clean up as much mold as you can.

“If there’s mold still in your home from these flooding events that we’ve had, then make sure that you are using bleaching water to clean up any of the mold that you can,” Daniels said.

To keep cold air and rain from entering home through old windows, add plastic weatherstripping along the sides of the window to improve insulation.

In the winter months, you can cover windows with window insulation film or any other type of plastic to keep cold air out of the home and save on the heating bill.

If you’re having an issue with uneven cooling in your house, check your vents. Make sure there isn’t any furniture pushed up against the vent. If the vents are dirty, vacuum them to remove dust and debris that has built up overtime.

The communities that are being the most negatively impacted need to be part of the solution as well, White-Newsome said.

“What I’ve seen not work is when localities and institutions try and develop their own institutions in their ivory tower in a box and don’t involve and really thoughtfully and intentionally engage those communities that are most impacted,” she said.

And part of how that can happen is by electing people into positions of power that know and understand this.

“It’s important to make sure that you’re electing and putting people in positions that already understand this, connections that will be able to represent the issues that, again, you’re passionate about and you care about,” White-Newsome said.

Outside of the home but inside the neighborhood, there are also opportunities for people to take part in changing their situations.

“Are there ways that you can figure out, you know, should this be a park that can help deal with some of the flooding that we can create in our community that continues to flood over and over again?” White-Newsome said. “Is there an opportunity to build a small microgrid so we can bring in our own clean energy to our community when a climate event happens? What is the funding and what are the policy pieces that we as a community want to advocate for and actually put into a community resilience plan?

“And so those are just a couple of ways that I think communities can get engaged in really, again, fortifying their future.”