As the state’s climate gets warmer and wetter, what to expect from wildfire season in Minnesota Remnants of the Greenwood fire that burned from August to September 2021 near Isabella, Minnesota, in the Superior National Forest.  Photo: Creative Commons/Chad Davis

Last summer, Minnesotans got a sudden taste of the kind of wildfire season usually associated with California.

An eruption of wildfires — most notably, the Greenwood fire in the Superior National Forest — was driven by drought. June, July and August had more than four times the number of fires as the 10-year average for each month.

“The severity of the fires (was unprecedented), like how much was actually consumed, how deep they were burning, how difficult they were to control,” said Allissa Reynolds, the wildfire prevention supervisor at the Minnesota Department of Natural Resources.

But was 2021 a one-off year for wildfires, or will Minnesota have to learn to live with extreme fire seasons?

The answer is complicated, say wildfire and forestry professionals, as wildfires, though most often caused by people, are driven by hard-to-predict factors that connect ecology, meteorology, geography and climate change.

This year, for example, a wetter-than-normal spring has drastically reduced Minnesota’s drought and the likelihood of fires; instead, the most present concern is flooding. And before 2021, the state was seeing an overall decrease in the number of wildfires. “A lot of that has to do with … people changing behavior,” said Travis Verdegan, the DNR’s predictive services coordinator. Roughly 40% of fires are caused by debris burning, “and that is just not a thing that is very common anymore.”

Minnesota’s weather is also getting, on the whole, warmer and wetter due to human-caused climate change. But despite more rain, rising temperatures mean wilder swings in extreme weather — from downpours to drought and back — that can leave forests more vulnerable to fires. In that vein, weather models predict that this year’s wet spring will give way to a hotter and drier summer.

And as damaging as wildfires are to people’s health and homes, they are normal in Minnesota, playing an essential role in forest health.

Every 150-250 years, historic fires in northern Minnesota would “kill off most of the trees, and then a new cohort would start,” Reynolds said. “The prairie in the southwest of Minnesota is very different. That (had) more frequent fires that would just burn the grass and the vegetation on top.”

Federal fire suppression policy dramatically reduced forest fires in the 20th century. That might have made the state safer for people in the short-term, but it also left more trees and forest material to feed hotter, more disastrous wildfires.

Meanwhile, many Minnesotans have made their homes near or in forests, unaware of their risk from fires or what they can do to reduce it. “Inevitably, every year, I’ll hear somebody say, ‘Oh, I didn’t think we had fires in Minnesota,’” Reynolds said. “We’ve had fires in Minnesota forever, really … and so we’d really like people just to recognize that.”

Smoke on the horizon

Alongside local fires, Minnesota was smothered by smoke in 2021.

In late July, the Air Quality Index (AQI) showed most of Minnesota was breathing unhealthy or very unhealthy outdoor air, full of PM 2.5, small particles that damage the lungs.

The entire state was under an air quality alert for several days, with some parts, like the northeast’s Arrowhead, spending nearly a month under the alerts.

Most of that smoke came from wildfires in Canada. Amid a widespread drought, Manitoba and Ontario saw record-setting fires that prompted the evacuation of several towns.

“The areas that were burned (in Canada) were approximately six times the amount of the entire Twin Cities metropolitan area,” said Matt Taraldsen, an air quality forecaster with the Minnesota Pollution Control Agency, at an MPCA briefing in late April. 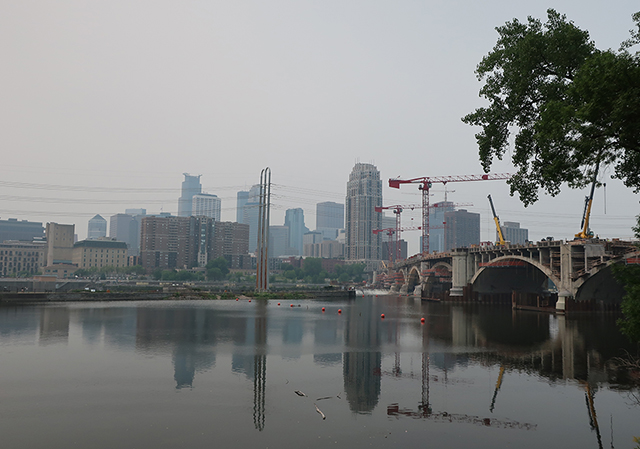 A hazy view of downtown Minneapolis in 2021. MinnPost photo by Corey Anderson

This year, much like Minnesota, a wet spring has meant fewer wildfires in Canada. But later this summer is expected to see an active fire season that will likely pump a few days worth of smoke into Minnesota, according to the MPCA.

Long-term, rising temperatures due to climate change will mean higher risk of fires, and smoke, as fire season stretches from spring to almost year-round.

“When you do have that increase in warmer weather, even when accompanied by modest increases in rain, you should expect to see drier and more flammable forests,” said Chris Marchand, a fire information officer in Ontario. “You (also) expect to see an increase in lightning, which already accounts for roughly 70% of all forest fires in our area.”

How much smoke reaches Minnesota from Canada is also a question of resources and priorities. A wildfire close to people will receive more focus from fire fighters, while fires far from residential areas, and deep in forests, are allowed to freely burn to support the local ecology.

But prioritizing the forest’s health means producing more people-harming smoke — which is, in part, what happened in 2021. “We had a huge amount of (remote) fires in Quetico Provincial park, which is right on the (Ontario-Minnesota) border, and probably just pumped smoke into Ely and Duluth for a month straight,” Marchand said.

“When you’re talking about smoke affecting somebody 1000 or 2000 kilometers away…do those elements factor into (fire fighting) decision making?” he said. “That’s an interesting question for the future.”

Despite the severity of 2021’s fire season, Minnesota wasn’t lacking for fire fighting resources, Reynolds said. “We were able to get the things that we needed when we needed them last year, and I can expect that to continue,” she said.

The state is part of several collaborative efforts to address wildfires, like the Minnesota Incident Command System, a state and federal inter-agency group, and the Great Lakes Forest Fire Compact, a data-sharing partnership with Wisconsin, Michigan, Ontario, and Manitoba.

And soon, Minnesota will have new tools to track fires and smoke to help residents manage health risks. As part of a NASA program, the state will have access to hourly data on air pollution from a satellite sensor launching later this year. Typically, the MPCA has to rely on satellite air pollution snapshots taken only a few times a day.

But there are challenges to keeping up with a rapidly changing fire season. When asked, Minnesota sends firefighters and aircraft to neighbors, including in Canada, who might need extra help suppressing wildfires. That system only works if Minnesota has the resources to spare.

“It’s often the case that when we’re really busy (with wildfires), our neighbors are as well,” Marchand said.

Trying to predict how weather will affect fire risk also keeps forestry professionals on edge. “A long range forecast is a very dubious thing,” Marchand said. “We never really look more than four to five days out into the future. Anything more than that is just speculation.”