Canoeist Dave Kasprak during a more placid trip to the Boundary Waters Canoe Area Wilderness. His May 2022 solo visit turned into a nightmare when he swamped due to currents caused by high water. He says he would have died had he not been wearing a life vest. He did however lose his camera and so has no record of the harrowing trip. Photo Image courtesy of Dave Kasprak

A couple weeks ago, Dave Kasprak made the 10-hour drive from outside Chicago, where he works as a school district network engineer, almost to the end of the Gunflint Trail in far northeastern Minnesota.

His plan was to complete a two-week solo canoe trip along the Frost River on the eastern side of the Boundary Waters Canoe Area.

In a normal year, the spring was a good time for his planned route, he was told. Runoff would make the paddle easier. He was counting on a pleasant trip, with what he hoped would be good fishing in Little Saganaga Lake.

It turned out to be a nightmare.

He knew there was record high water. The outfitter where he picked up his permit warned him of it. But he's a seasoned paddler. He's 43, and has taken about 20 trips into the Boundary Waters over the past decade.

But he was amazed when he arrived at the first portage on Cross Bay.

"The landing was literally covered in whitewater. And I was thinking to myself, ‘What's it gonna look like further down the road?’" 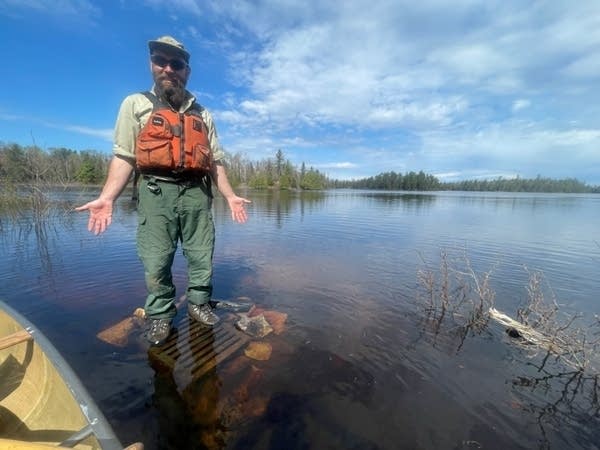 Superior National Forest wilderness ranger Justin Olen stands on a fire grate in a submerged campsite on the South Kawishiwi River in the Boundary Waters Canoe Area Wilderness on May 18.  Photo: Courtesy of U.S. Forest Service

But it was a beautiful sunny day. He was excited for his trip. He was more intrigued by the conditions than fearful of them. So he pushed on, across another flooded portage trail, and paddled toward a narrow gap in Ham Lake.

"And as I approached the narrowing, I was a little off on going straight, and it just turned my boat like a switch and flipped me into the water instantly."

The water was intensely cold.

The ice had only broken up a couple days earlier. And the current was immensely stronger than what he expected.

It was pushing him out into the lake.

He grabbed his paddles and packs and headed toward the nearest shoreline, still lined with snow. He kept checking his watch to monitor how long he was in the water. After about a half-hour, “My legs started going numb and tingly,” he said.

“The current was just so strong, and I was just so heavy, and the drag with all my gear in the boat was so great that I was just barely moving in the water. My legs were slowing down.”

He let go of one of his food packs so he could swim faster. After about an hour, he finally made it to shore. He slid his canoe over a fallen tree and flipped it over to drain the water. Then he collapsed inside of it.

"I was freezing tired and cold but I'm in the boat,” he remembered thinking, “out of the water now."

He paddled back toward the portage he had recently come across. The landing was next to what's normally a placid creek. Now it was a raging torrent.

And this is when he made a nearly fatal mistake.

He saw the food pack he had left behind floating in the water. And he tried to grab it.

"That's when the current took me and sucked me in pretty quick. I went down the rapids and it dumped me as I was getting hit by the tree branches and threw me in the water."

It was like getting beaten with bats going down a waterslide as he got swept downstream, he said, banging against tree branches.

He kept his legs up in front of him so they wouldn’t get stuck on floating logs and other debris. But his head kept getting pushed down under the water.

“I couldn't breathe, no matter how I how much I struggled.”

He stuck his arms up, and managed to grab onto a tree. Exhausted, he pulled himself up the bank.

"When I got up, I knew I needed to get my clothes off. Because I was shaking, beyond cold. I can't describe the kind of cold. It wasn't even cold anymore. It was like burning,” he said.

He wrapped himself up in a tarp, vomited and passed out. When he came to, he made camp, and the next morning bushwhacked four hours to his car — shaken, but alive.

The U.S. Forest Service says they have received several reports of capsized canoes this spring, as a heavy winter snowpack followed by drenching spring rains sent water levels soaring across the Rainy River Basin, from the Boundary Waters to Voyageurs National Park along the Canadian border.

USFS spokesperson Joanna Gilkeson said she’s heard of a couple incidents where canoeists have needed to be rescued by emergency personnel. But to her knowledge, no one was injured.

The Superior National Forest is asking visitors to call ahead to ranger stations or outfitters to get the most recent conditions along the canoe route they plan to travel.

"They just need to be prepared and know what they're walking into. There are high-risk areas and unpredictable levels of water,” Gilkeson said, adding that conditions vary widely across the million-acre wilderness.

Andy McDonnell, co-owner of Tuscarora Lodge & Canoe Outfitters, near where Kasprak capsized, said water has receded significantly in the past few days, especially on the eastern side of the wilderness.

Still, he's telling paddlers to be cautious, especially at portages.

"Make sure your lifejacket is on, make sure it's cinched nice and snug. Make sure everyone's got a good grip on their paddles,” he said. “And that you are really paying attention because the current, you know, was grabbing people left and right and pulling them all over the place."

McDonnell said none of his clients have canceled their trips. He said most have heard about the high-water conditions and are calling ahead to check in. He said some canoeists have changed routes, and have encountered flooded portage trails. But other areas are barely affected by the high water. 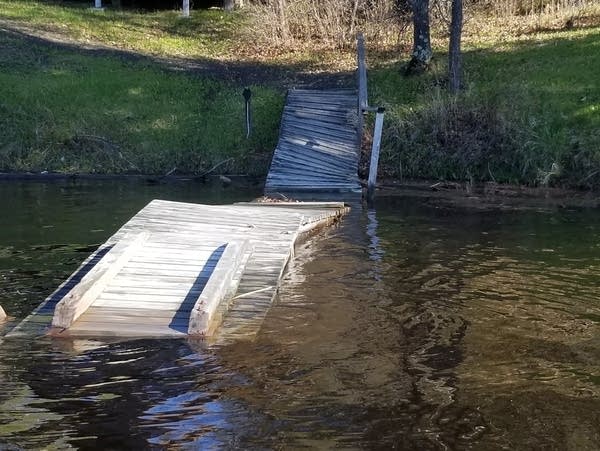 Piers and docks have been wrecked by floodwaters at the Sand Point Resort, located on Sand Point Lake along the Minnesota-Ontario border, in May 2022.  Photo: Courtesy of Doug Hall

For Dave Kasprak, he's sharing his story so people can learn from his ordeal — what he did right, and the mistakes he made.

"If I could save one life, then I'd be happy. And that's all I'm trying to do is spread awareness and education.”

One thing he said he knows for certain: If he hadn’t been wearing his life jacket, he would not be alive to tell his story.

Kasprak said his experience hasn't made him fearful of the Boundary Waters. But it has increased his awe and respect for the power of the wilderness. He’s planning another canoe trip, later this summer.

“I don’t want this to scare people,” he said. He just wants people to enjoy it safely.

To see the original story and read related reporting, follow this link to the MPR News website. https://www.mprnews.org/story/2022/05/27/boundary-waters-canoeist-recounts-harrowing-highwater-survi...