Major Andrew Dennis (left) is part of a 22-member emergency response team from the Department of Defense assisting the staff at the St. Cloud Hospital on Dec. 9, 2021. Photo: Paul Middlestaedt for MPR News

For the first time since COVID-19 arrived, new infections in Minnesota are topping 10,000 a day.

And those are just the folks who are getting a lab test. That number does not count the number of people using at-home COVID-19 tests.

"All five of the top days for cases recorded in Minnesota by sample data, were within a week after Christmas,” said MPR News data reporter David Montgomery. “Before then, all the records had been set back in November 2020."

The ripple effect is being felt across the state, as sick employees — or those with positive family members — quarantine as the highly transmissible omicron variant of COVID-19 continues to sweep across the nation.

Garbage cans aren't getting emptied in some places. Some police and fire departments are straining to keep officers and firefighters on the street.

Roseville schools said Tuesday night it is shifting to two weeks of distance learning, after reporting more than a third of staff absent in some schools. Day care centers licensed for 100 kids have as few as three children in them.

At Metro Transit, nearly 15 percent of the workforce is out sick, and COVID is hitting harder than ever before, according to interim chief operating officer Brian Funk.

"Nearly one in five cases since the start of the pandemic has happened to us, just since Christmas time," Funk said.

Hundreds of train and bus trips are being canceled daily, and Funk said it would be even worse had the agency not reduced service overall last month.

And get this: The lab in Oakdale that processes COVID tests for the state? More than half the staff has been impacted by coronavirus, according to a statement from Infinity Biologix.

Granted, many of these cases are mild, and people are bouncing back relatively quickly, due in part to vaccinations.

But also — many are not.

After struggling to handle the delta variant wave that struck this fall, Minnesota hospitals report admissions are on the rise again, as they are in some of the nation's hardest hit cities: COVID hospitalizations in New York and Chicago are already at or near 150 percent of their peaks in 2021.

Here in Minnesota, the seven-day rolling average of hospital admissions is up more than 45 percent since Christmas Eve, back to over 200 a day. 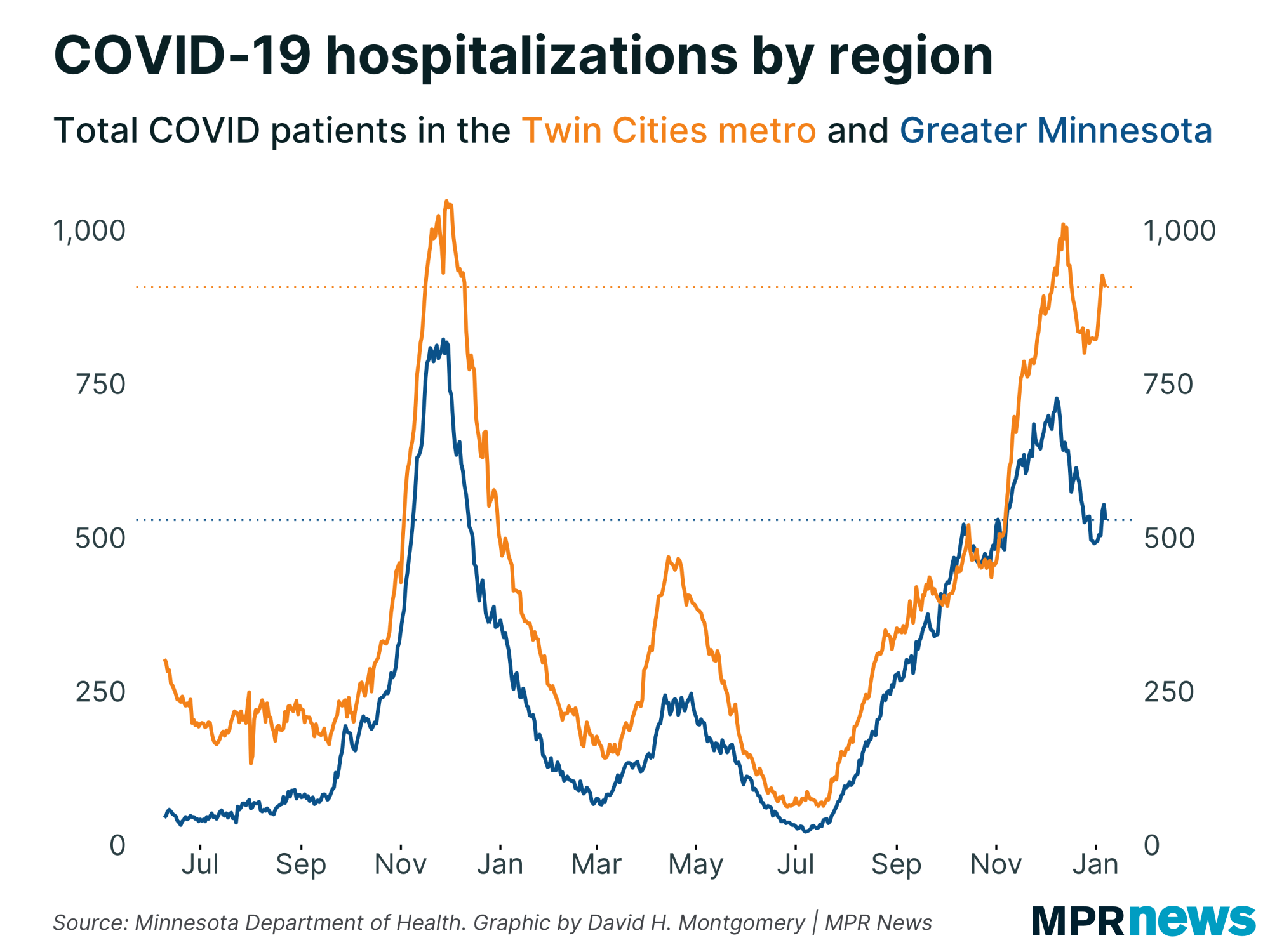 COVID-19 hospitalizations in and out of the Twin Cities metro, by location of the hospital.
David H. Montgomery | MPR News

If omicron is “COVID light,” its burden is still growing in Minnesota.

Looking at the data, Montgomery said COVID has been following a familiar pattern: a fairly direct relationship between infections, leading inevitably to some serious illness and thousands of deaths.

“There's some speculation about whether this omicron variant is going to break that, where we're going to see what's called de-coupling, where cases go up and hospitalizations don't. That's interesting, we're watching that,” Montgomery said. “So far, we saw cases start to go up in Minnesota a couple weeks ago, and over the last week, we've seen hospitalizations start to rise, especially non-ICU beds. Those started to go up, they're going up steeply, but it’s still relatively new.”

And the trouble is, Minnesota isn't done with the delta variant, which peaked about a month ago. Hospitals are still full, with ICU beds still scarce in the Twin Cities.

"We don't have to see hospitalizations go up that much in order to set a new record for people in the hospital with COVID," Montgomery said.

Health experts fear that even a glancing blow from omicron may prove a staggering one-two punch for the state's health care system.

Dr. Rahul Koranne, head of the Minnesota Hospital Association, said there is a real danger that people are going to die for lack of care.

"I don't mean just my knee hurts and that surgery was canceled, or my shoulder has arthritis and that surgery was canceled,” Koranne said. “I'm talking about masses in the abdomen or the stomach. I'm talking about large heart surgeries. Anything that is not an emergency surgery is being canceled because we are reserving that capacity for heart attacks, strokes and COVID patients."

Omicron, he says, is going to be a matter of life and death — even if it isn't for the people who have it.

To listen to the audio version of this story and read related reports, follow this link to the MPR News website. https://www.mprnews.org/story/2022/01/12/covid-continues-impact-throughout-minnesota-life