While there still are weeks of winter ahead, officials at Apostle Islands National Lakeshore in northern Wisconsin say it's not looking promising for access to the park's famed Lake Superior ice caves.

"While we certainly don't want to get anyone's hopes up or dash them, conditions are not looking great for the Mainland Ice Caves to be accessible in 2022," park officials posted in an online update last week.

The region has seen a lot of subzero temperatures in recent weeks, which can help form the lake ice that's needed to access the ice formations on foot. But there've also been a lot of gale-force winds on Lake Superior, which can quickly break that ice into pieces and sweep it away from shore. 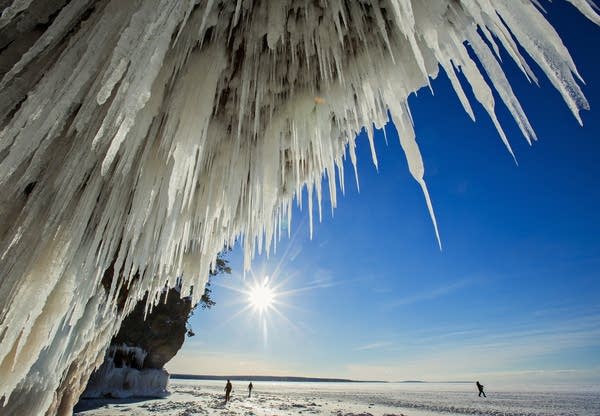 Icicles descend from and visitors walk by one of the many ice caves of the Apostle Islands National Lakeshore on Feb. 4, 2014 near Cornucopia, Wis. Photo: Derek Montgomery for MPR News file

Ice coverage on Lake Superior was at about 7 percent as of Saturday — below the long-term average for this point in the season.

Furthermore, park officials noted, "the NOAA ice cover forecast for this winter on Lake Superior is 8.5% maximum ice cover. In years that the Mainland Ice Caves have been accessible, Lake Superior ice cover has been over 90%." That was the case in 2014 and 2015, when the frozen spectacle drew thousands of visitors who walked a mile or more on frozen Lake Superior to see it.

The lake ice conditions are monitored closely by park staff all winter, to determine whether it’s safe to allow public access.

"Lake Superior is warming rapidly, ice cover is decreasing, and the likelihood of access to the ice caves has become a rare event," park superintendent Lynne Dominy said last winter. “One of the most common phrases you hear around here is ‘the Lake is the Boss’ — which is true in the summer and in the winter."

The ice caves along the lakeshore near Cornucopia, Wis., are formed by water seeping down through the sandstone cliffs and freezing into icicles and other ice formations, similar in appearance to rock formations in a cave. The icy display also can be enhanced by spray from Lake Superior waves.

To see the original report and read related stories, follow this link to the MPR News website. https://www.mprnews.org/story/2022/01/09/apostle-islands-ice-caves-access-not-looking-promising-this...