Minnesota health officials on Friday reported another 56 COVID-19 deaths in the state, bringing the overall pandemic death toll to 9,338.

The state is averaging more than 30 deaths a day, over the past seven reporting days — the highest that average has been since mid-January. The number of people being treated for COVID in Minnesota hospitals remains near 2021 highs. And the number of active COVID cases in the state remains near levels not seen in nearly a year. 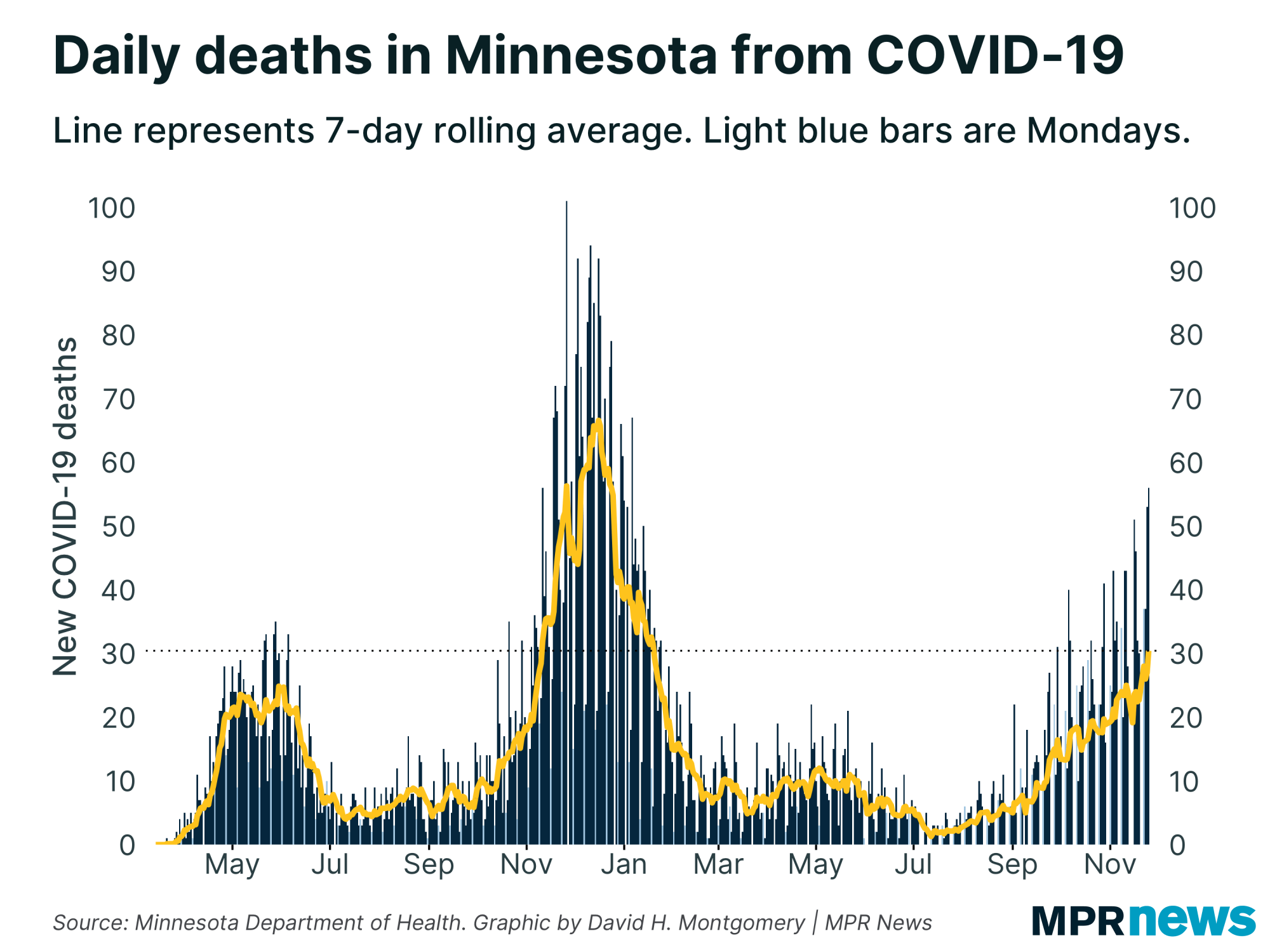 But amid that grim news, there are some potential encouraging signs in the trajectory of the pandemic in Minnesota as the state enters the holiday season.

Averaged over the past seven reporting days, Minnesota is averaging about 4,175 new cases a day — down from nearly 4,500 early last week. 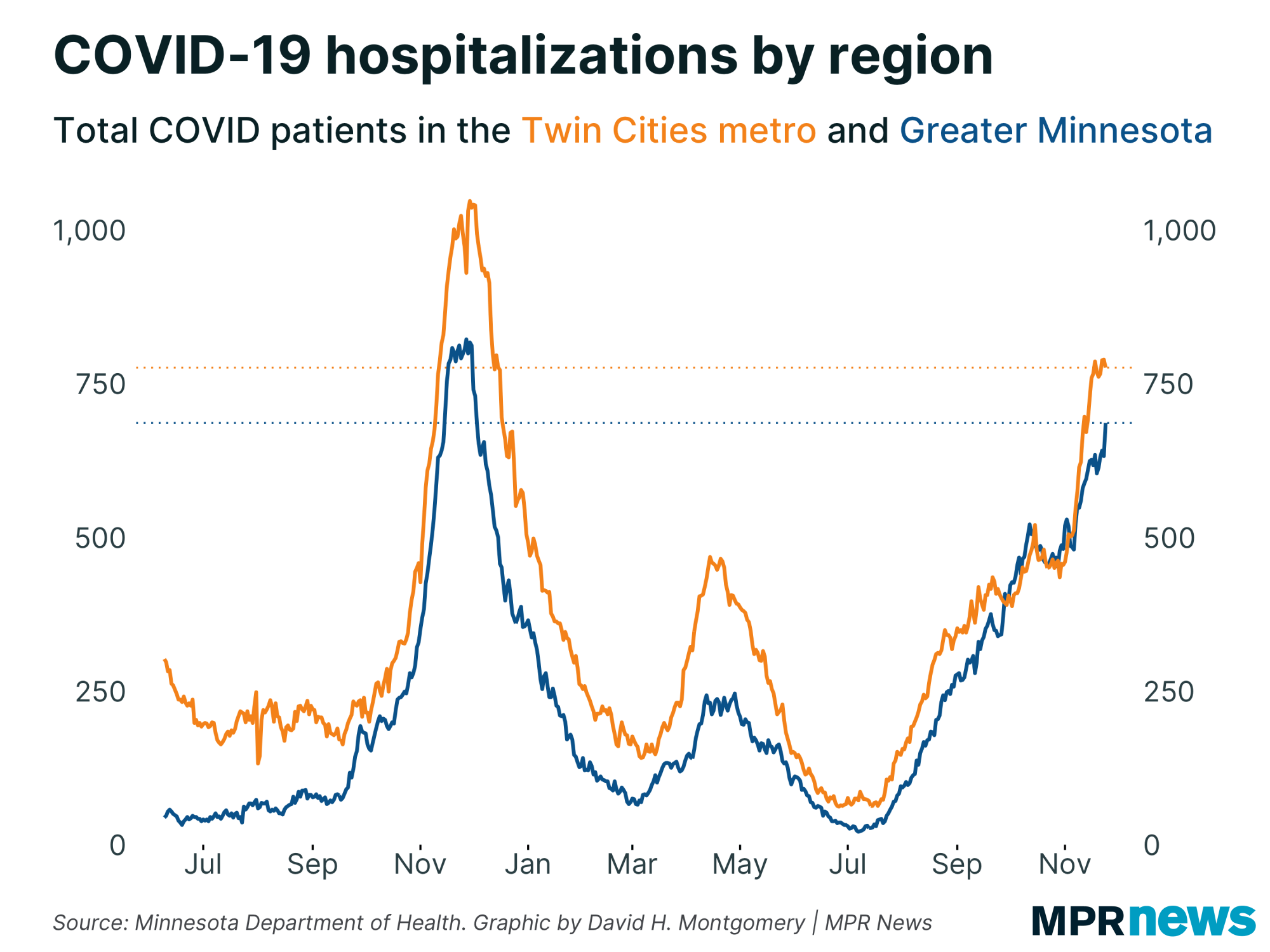 The average test positivity rate is inching down as well. It’s now just over 9 percent, down from more than 10 percent last week.

Friday’s update represents data as of Wednesday; there was a lag time in reporting because of the Thanksgiving holiday.

It remains to be seen whether the downturn in case counts and the test positivity rate are a momentary shift in the numbers, or the start of something more enduring. 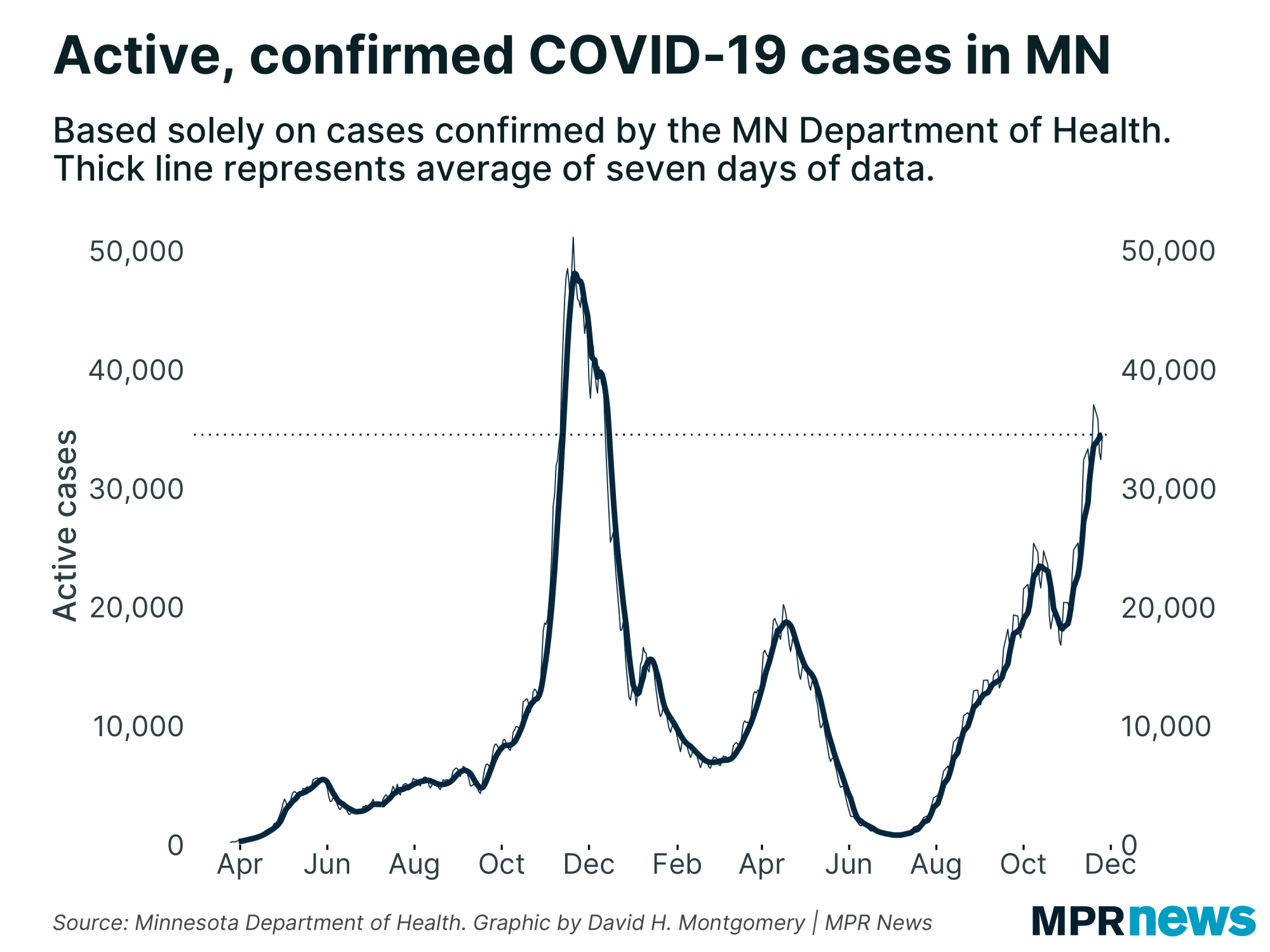 In the meantime, doctors, nurses, and respiratory therapists from the U.S. military are on the ground in Minnesota to ease the strain COVID cases are placing on the state’s health care system. They were set to start providing patient care at HCMC in Minneapolis this week, and at St. Cloud Hospital starting Monday.

Hospital executives across the state say COVID patients combined with other care needs are overwhelming short-staffed care centers. Hospitals in this wave are seeing more people needing treatment for other illnesses, along with people who delayed getting care over the past year and a half.

Asked earlier this month why conditions have worsened so much lately, Minnesota Health Commissioner Jan Malcolm said the picture wasn’t clear but that waning immunity from vaccine shots administered earlier in the year played a role, along with people moving indoors with the weather and the highly contagious nature of the virus’ delta variant.

Driven by the highly contagious delta variant, the entire state shows a high level of COVID-19 transmission, according to the Centers for Disease Control and Prevention.

The current surge is being driven largely by rising case counts in greater Minnesota. 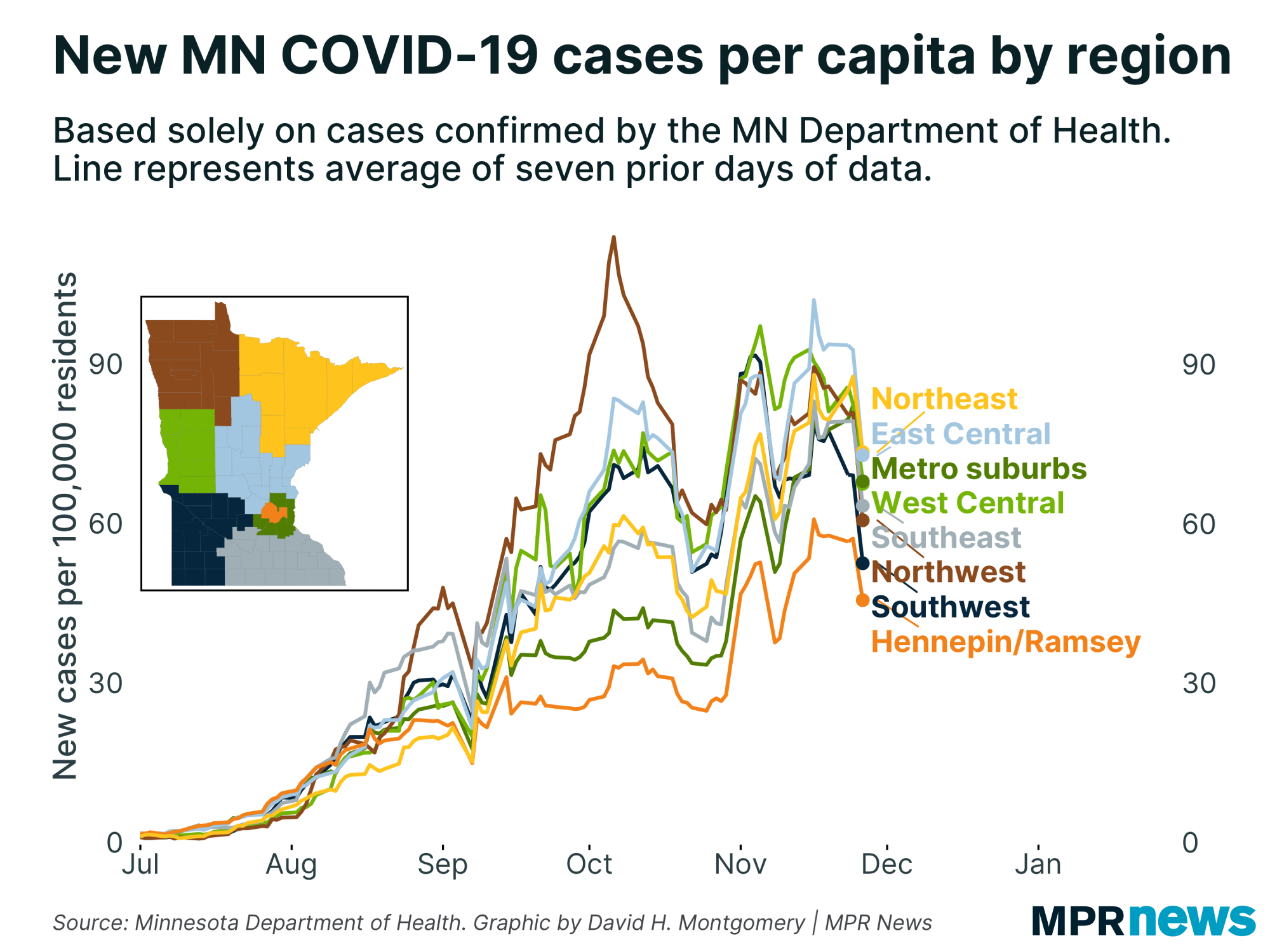 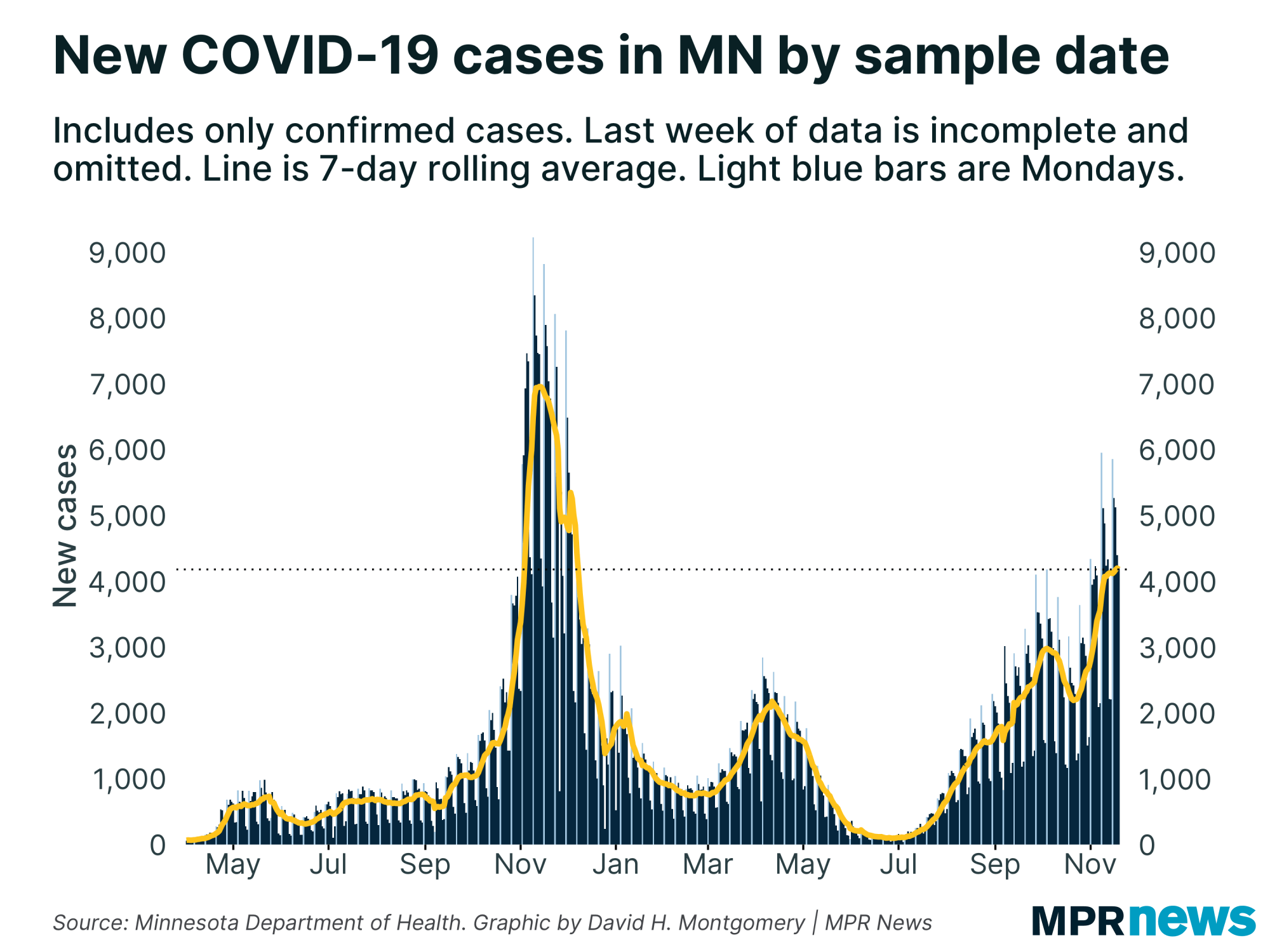 As of Friday’s update, 69.7 percent of eligible Minnesotans — those ages 5 and older — have received at least one dose of a COVID vaccine. That includes about 21 percent of kids in the 5-11 age group who just became eligible for the vaccine earlier this month.

When focused just on Minnesotans who’ve been eligible for the vaccine for longer — people ages 12 and older — the rate of people with at least one dose is 75 percent. More than 71 percent are fully vaccinated. 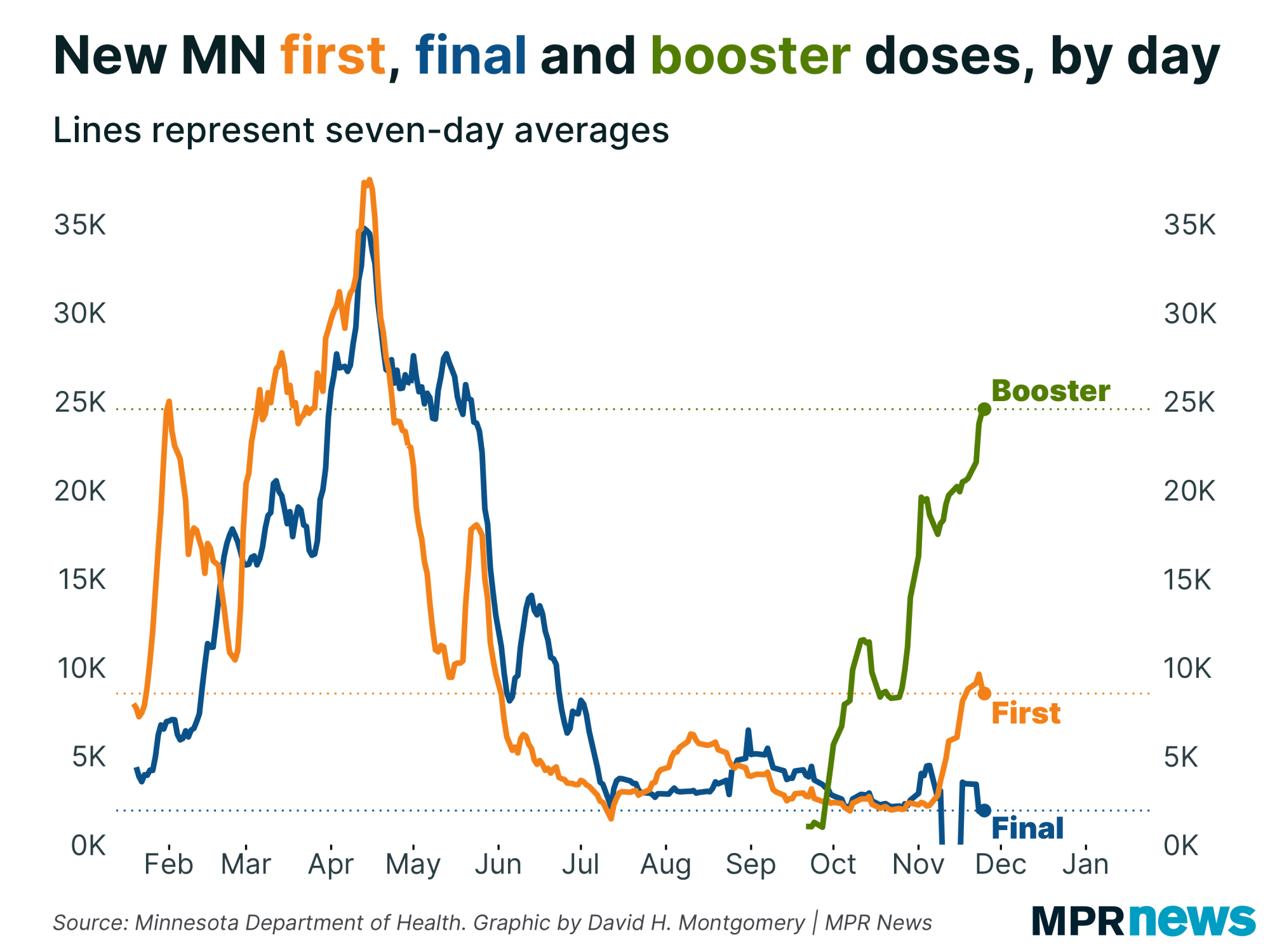 However, the struggle continues to get first shots into more Minnesotans. Wide gaps remain in the vaccination rates among regions and counties.

To see the original report and read read related stories, follow this link to the MPR News website. https://www.mprnews.org/story/2021/11/26/covid19-in-mn