Forest fires burned nearly 800,000 hectares of land across Ontario in 2021, the most on record in the province in a single year.  Photo: Ministry of Northern Development, Mines, Natural Resources and Forestry/Provided

Wildfires that forced evacuations of a number of remote northwestern Ontario First Nations burned more hectares of land in the province in 2021 than in any other year in history, surpassing the record set 26 years ago.

More than 3,000 people were temporarily displaced in summer-long evacuation efforts during the 2021 forest fire season in Ontario, particularly in the northwestern region of the province, according to recently released information from Ontario's Aviation, Forest Fire and Emergency Services (AFFES).

Two fires — both now the largest on record in Ontario — were responsible for a significant portion of the land area affected. The Kenora 51 fire topped 200,000 hectares, and alone exceeded the average annual amount of burned land in the entire province over the last decade. 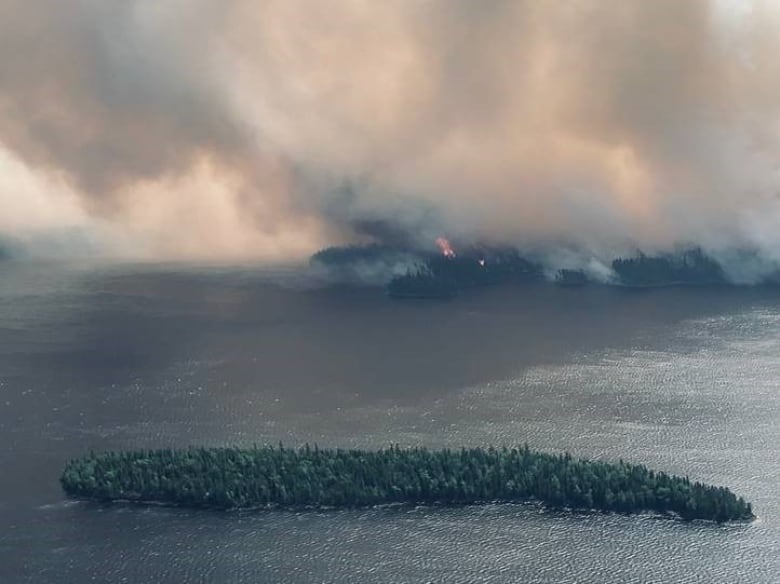 The Kenora 51 fire, which grew to more than 200,000 hectares in size, became the largest wildfire recorded in Ontario. Photo: Ontario Forest Fires

Chris Marchand, a provincial fire information officer, said weather stations in western areas of the region, close to the Manitoba border, typically receive between 270 and 300 millimetres of rain during May, June and July.

But during those three months in 2021, about 60 per cent of weather stations near the Manitoba border recorded less than half of those expected rainfall amounts, with several others receiving less than 100 millimetres.

"It created drought-like conditions that made those fires grow large, become very stubborn to put out and when paired with high winds, moved quite quickly," he said.

Thousands forced from their homes

Several First Nations — Poplar Hill, Deer Lake, Pikangikum, Keewaywin, Cat Lake, North Spirit Lake, Koocheching and Wabaseemong — were either partially or fully evacuated either due to the threat of fire or because of thick smoke.

While some municipalities in the northwest, including Thunder Bay, Kenora and Sioux Lookout, were able to take in evacuees, hundreds of people were instead sent to more far flung destinations that in some cases were thousands of kilometres away.

Community members from Deer Lake, a remote community in the far northwestern corner of the province, were flown to the far east part of Ontario in Cornwall, limited to a single suitcase to bring for their stay. Other cities like Sudbury, London and the GTA became host communities. 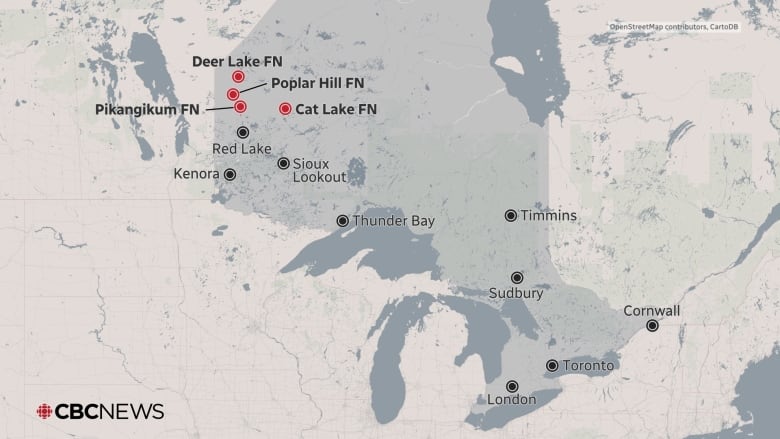 People on remote northwestern Ontario First Nations who were forced out of their homes because of forest fires in the summer of 2021 were relocated hundreds, if not thousands, of kilometres away. Photo: CBC News

Premier Doug Ford visited Thunder Bay in late July to meet with evacuees and Indigenous leaders, after weeks of demands to appear in the community. He was presented with an 80-page report from Nishnawbe Aski Nation outlining a First Nations-specific emergency management concept.

One year after a rushed evacuation, the town of Red Lake again spent another summer dealing with the threat of wildfires. Several large fires burned nearby, causing blanketing smoke when winds blew toward the mining town. Some residents proactively left the town, but those who remained behind spent weeks preparing for a potential evacuation.

Some patients at the Margaret Cochenour Memorial Hospital in Red Lake were transferred to facilities elsewhere in the region as a pre-emptive step in case a broader evacuation was required.

Crews spent weeks building fire breaks and setting up sprinklers to protect property and infrastructure in the case of approaching fires.

The tinder-dry conditions were at their peak in mid-July, when some days saw more than 100 active fires burning across northwestern Ontario. On July 20, a single-day total of 80 new fires were confirmed across the region.

To help in the firefighting efforts in northwestern Ontario, in some areas, provincial bans were put in place on outdoor burning, including campfires, from the end of June until the beginning of September. As well, an order restricting certain industrial activity lasted nearly a month, until mid-August, to try to prevent human-caused fires. 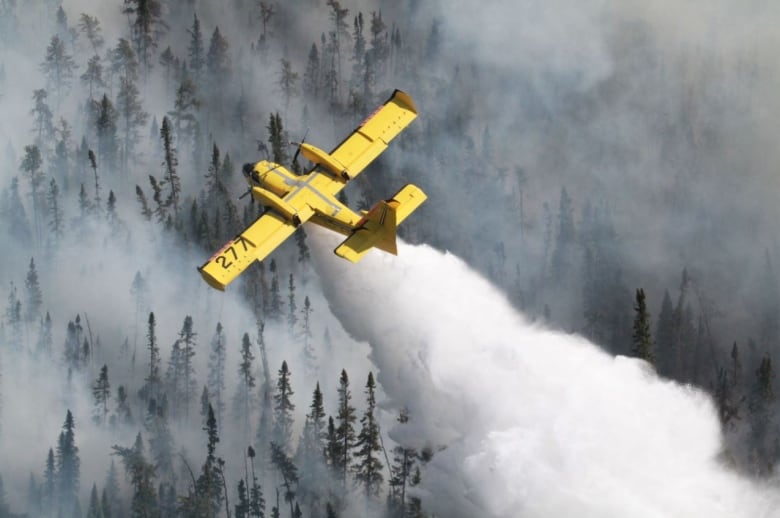 Smoke from several forest fires near the Ontario-Manitoba border forced evacuations of four First Nations in Manitoba in the summer. Photo: Ontario Ministry of Natural Resources and Forestry/Twitter

The province also brought in nearly 500 firefighting personnel from outside Ontario, including from parts of Canada and Australia, Mexico and the United States.

While many provinces sent reinforcements, others were in the middle of battling their own fires.

While the Ontario fires resulted in scorched landscapes, the province avoided the destruction seen in other places across Canada.

This summer, with British Columbia under a heat dome that resulted in the hottest temperatures ever recorded in Canada, the village of Lytton was largely destroyed by a ferocious wildfire in late June.

Five years earlier, Fort McMurray, Alta., was the scene of destruction after a fast-moving wildfire swept through the city and cost millions of dollars in damage.

Jian Wang, a professor in the faculty of natural resources management at Lakehead University in Thunder Bay, paid close attention to this year's fire season in the northwest.

Wang said one of the easiest ways to control wildfires and protect places where people live is to manage the fuel.

"If you can have a one- or two-kilometre belt — that's called a safety belt — you can really manage that," he said, proposing communities cut an area immediately surrounding their boundary.

Wang said Indigenous cultural burns have also been identified as a way to help manage fuel that could threaten communities.

He encourages policymakers to consider how to address fire risk before there are flames.

"You spend lots of money trying to stop the fire. That's too late."

To see the original report and read related stories, follow this link to the CBC Thunder Bay website.  https://www.cbc.ca/news/canada/thunder-bay/record-breaking-ontario-forest-fire-season-1.6242422