Situated near downtown and St. Cloud State University, Lake George is a popular spot for outdoor activities in St. Cloud, Minn. The Minnesota Pollution Control Agency is adding more than 300 lakes, rivers or streams to its list of impaired waters that don't meet pollution standards. In a positive development, the agency has proposed removing Lake George from its list because its water quality has improved. Photo: Paul Middlestaedt for MPR News file

Minnesota regulators are adding several more lakes and a stretch of the St. Croix River to the state’s list of waters that fail to meet water quality standards due to so-called “forever chemicals” found in fish tissue.

For the first time, a handful of those lakes are outside of the Twin Cities metro area — including Lake Winona in Alexandria, and Wild Rice Lake and Fish Lake north of Duluth.

Also new to the list: dozens of water bodies that have too much sulfate, which threatens wild rice production.

Under the federal Clean Water Act, Minnesota is required every two years to compile a list of lakes, rivers and streams that don’t meet water quality standards. The list must be approved by the U.S. Environmental Protection Agency, and the state is required to develop plans to clean up water bodies on the list.

In all, the Minnesota Pollution Control Agency is proposing to add 305 water bodies to its 2022 list of impaired lakes, rivers and streams that fail to meet state water quality standards.

That brings the total number of water bodies on the list to 2,904, with 6,168 impairments. A lake, river or stream can be listed for multiple reasons.

“The list is cumulative. We keep adding to it,” said Miranda Nichols, MPCA’s impaired waters list coordinator. “And it does tell us how well Minnesota lakes and streams support their fishing and swimming goals.” 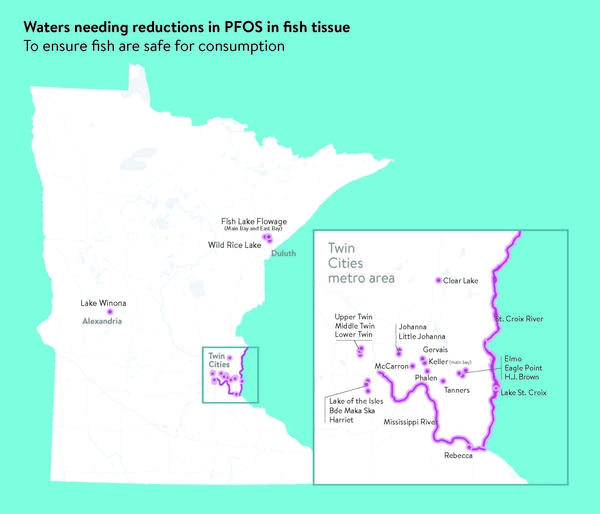 Earlier this week, the EPA finalized the 2020 version of Minnesota's impaired waters list, after adding 32 waters that do not meet the state’s wild rice sulfate standard.  Graphic: Courtesy of MPCA

Common problems include degraded habitat for fish and aquatic bugs; too much sediment that clouds the water and chokes fish; bacteria that can make people sick; and too many nutrients like phosphorus that spur algae growth and turn lakes and rivers slimy and green.

The draft list includes 15 lakes and stretches of river impaired due to PFOS, or perfluorooctane sulfonic acid, a member of the family of human-made chemicals known as PFAS.

The other water bodies added because of PFOS in fish tissue are the St. Croix River from Taylors Falls Dam through Lake St. Croix, and several lakes in the Twin Cities metro, including Lake Phalen, Lake McCarrons and the main bay of Keller Lake, all in Ramsey County.

The new additions would bring to 26 the total number of Minnesota water bodies impaired due to PFOS. Others already listed include the Mississippi River and Bde Maka Ska in Minneapolis.

The listings can trigger the Minnesota Department of Health to issue advisories cautioning people to limit the amount of fish they eat from those water bodies. 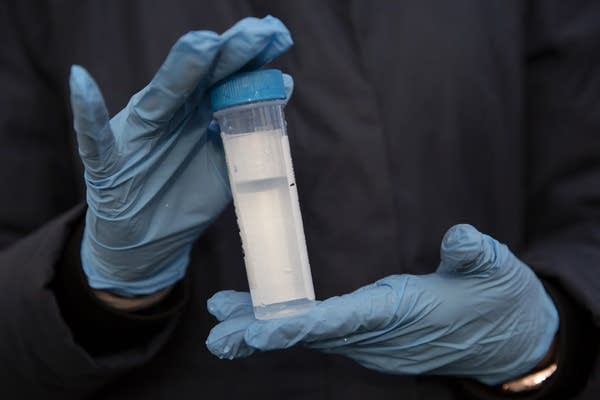 PFAS, or per- and polyfluoroalkyl substances, is a large class of related chemicals widely used in industry and found in many consumer products, including water-repellent fabrics, furniture, carpeting, nonstick cookware and food packaging.

They are extremely persistent, and don’t break down in the environment. PFAS have been found in water, air, fish and soil, as well as the blood of animals and people, all over the globe. Prolonged exposure of some PFAS is linked to health problems, including kidney and thyroid disease, low birth weight and some cancers.

PFOS was one of two PFAS chemicals manufactured for decades by 3M and other companies for use in many products, including firefighting foam used to fight oil fires, especially at airports and military bases. It was phased out of production in the U.S. in the early 2000s.

There are many ways PFAS could be getting into the lakes, said Catherine Neuschler, water assessment supervisor for the MPCA.

“These chemicals really are ubiquitous,” she said. “They're found in so many of our consumer products. They can be transported by air deposition. There's a lot of ways.”

Sources of the PFOS contamination in the Greater Minnesota lakes haven’t been confirmed. However, the Duluth-area lakes are located near the Duluth International Airport, a known site of PFAS contamination linked to the use of firefighting foam in training.

“What all this means is more work is needed to identify and eliminate the sources of PFOS in order to reduce their levels in lakes and rivers and prevent limits being placed on fish consumption,” Nichols said.

Early this year, the MPCA released its PFAS “blueprint” — a plan to identify, manage and clean up the chemicals. Agency officials have said they expect to find more PFAS contamination as they expand monitoring around the state.

Also new to the draft list are 35 lakes listed as impaired for too much sulfate, usually discharged by mines and wastewater treatment plants. The listing could mean stricter permit limits for those facilities.

Last week, the EPA finalized Minnesota’s 2020 impaired waters list after adding 32 water bodies that do not meet the state’s sulfate limit to protect wild rice. The EPA said the state erred by not including them on its original list.

The draft 2022 list includes those water bodies along with three more where sulfate exceeds the state limit — Goodners Lake in Stearns County, Lake Stella in Meeker County and the Long Prairie River from Spruce Creek to Eagle Creek in Todd and Douglas counties.

In a positive development, the MPCA is proposing to remove more than 100 water bodies from the impaired waters list because their water quality has improved, often due to local restoration efforts. Those include Lake George in St. Cloud and the Buffalo River in northwestern Minnesota.

The public has until Jan. 7 to comment on the draft list. Several public meetings are planned around the state in December.  The state must submit it to the EPA by April 1.

To hear the audio version of this story and read related reports, follow this link to the MPR News website.  https://www.mprnews.org/story/2021/11/08/minn-lakes-with-forever-chemicals-added-to-states-list-of-t...