In December 2020, nurse Kari Giersdorf holds an iPad for COVID-19 patient Gabe Pastores of Cannon Falls, Minn., to talk to his family inside of a medical ICU at St. Mary's Hospital at the Mayo Clinic in Rochester, Minn.  Photo: Evan Frost | MPR News 2020

Nearly 900 people are in Minnesota hospitals now with COVID, with 234 needing intensive care — the highest count so far in 2021, according to Thursday’s Health Department data.

While hospitalizations aren’t skyrocketing as they did in fall 2020, the current situation is still pressuring hospitals and ICUs across Minnesota. This week, for the first time in the pandemic, there were more COVID patients hospitalized in greater Minnesota than in the Twin Cities region. 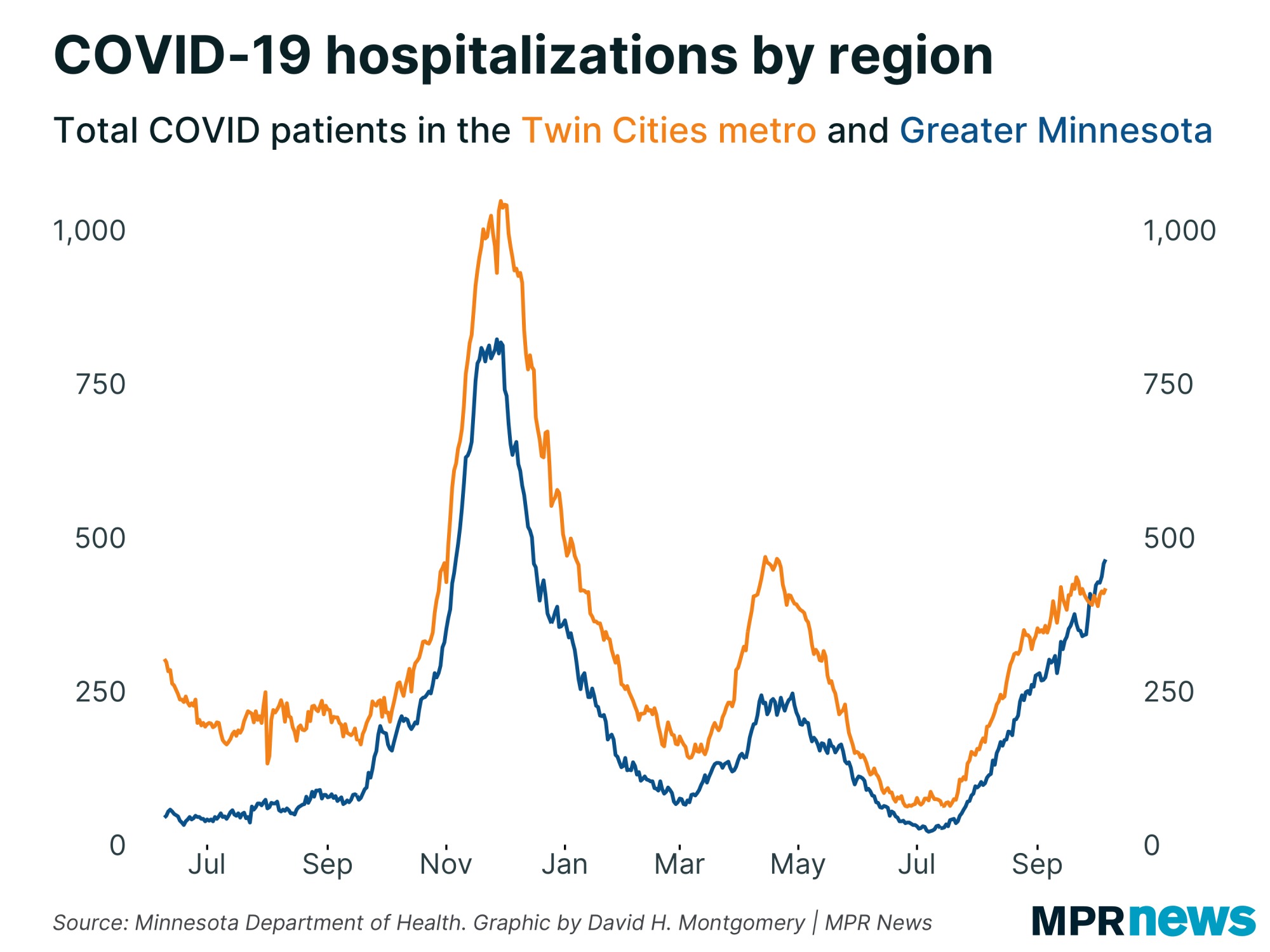 “Across the state, we have more hospitals reporting that they have zero available adult medical surgical beds and zero adult ICU beds available during this latest surge,” Health Commissioner Jan Malcolm told reporters. “These are numbers we didn't see even in the worst of last fall’s surge.”

The state is now down to 1 percent of hospital beds available in the Twin Cities metro region, 5 percent in the southeast and 7 percent in the central part of the state, she added.

The latest numbers also show there are no pediatric hospital beds available in the central Minnesota region, only two in the southeast, one each in the northwest and south-central areas and seven available in the metro area, she said.

She pleaded with eligible Minnesotans to get vaccinated and take precautions to slow the spread of the disease. “There’s unfortunately plenty of room for the virus to do its harm.”

Hospital leaders delivered a similar message as they acknowledged the immense pressures serving rising numbers of patients — some who’d been delaying needed care during the pandemic — while struggling to treat COVID infections as new and active cases grind higher.

“The reality is the staff are exhausted and they’re working harder than they ever have,” said Dr. Kevin Croston, CEO of North Memorial Health, based in Robbinsdale, north of Minneapolis.

“Staff are working to the highest levels and the best of their abilities, but we could use more people, and they’re not out there for us to get,” added Rachelle Schultz, CEO of Winona Health in southeastern Minnesota. 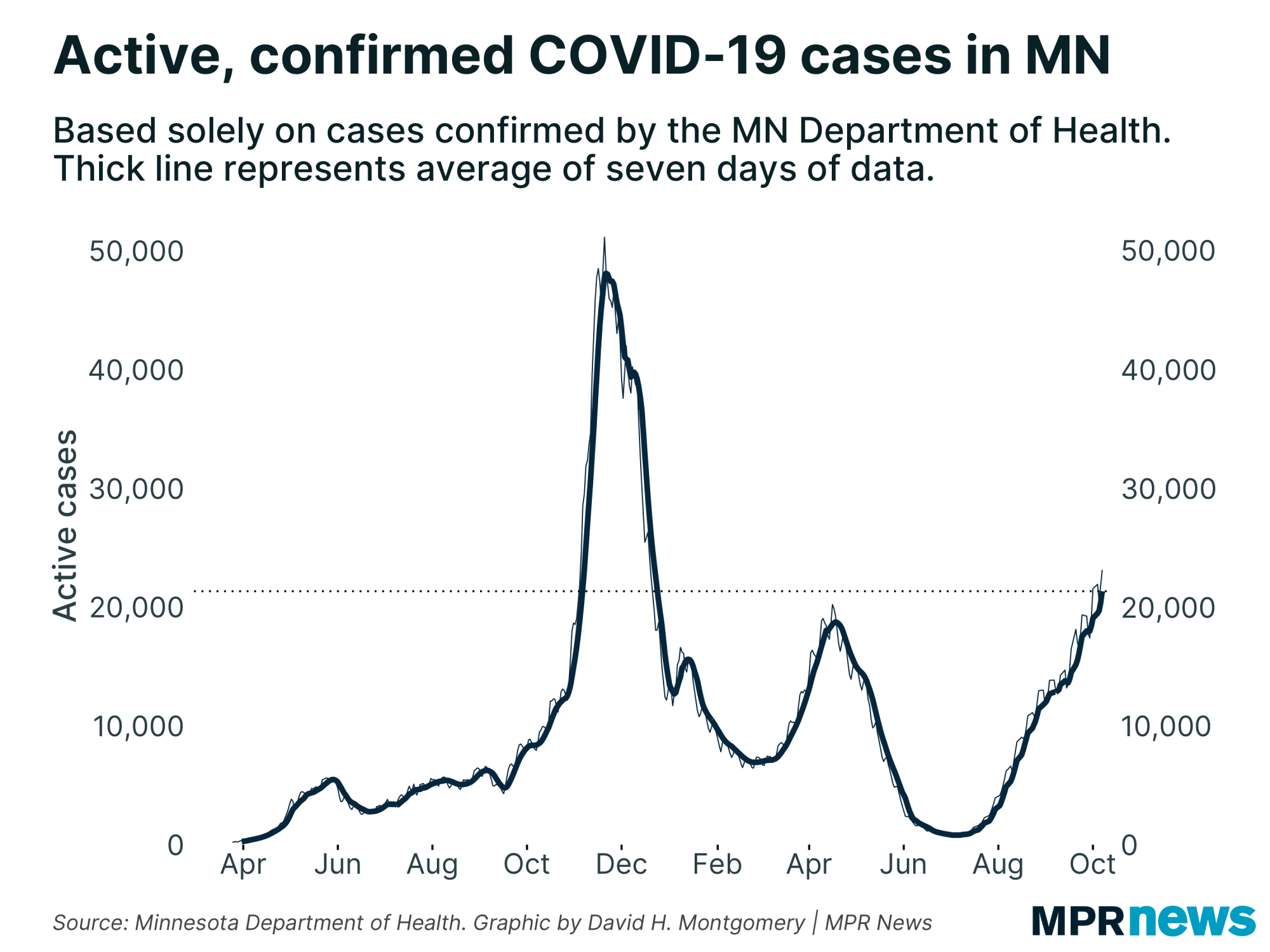 The disease is still most prevalent among teens, but the trend from recent weeks of only growth among kids is no longer true. Counts are rising in every age group. Thursday’s report included 514 new cases in K-12 schools, involving 441 students and 73 staff members.

“Transmission in schools and among children continues to be a particular area of concern,” said Malcolm. “We're now seeing more than 3,000 cases a week in children under 12. This represents a new and troubling high mark for the entire pandemic.”

The rate of tests coming back positive, which had stayed relatively stable through the spring and early summer, is now showing some upward strength. The seven-day average is running above 7 percent — higher than the 5 percent officials find concerning and the highest since January. 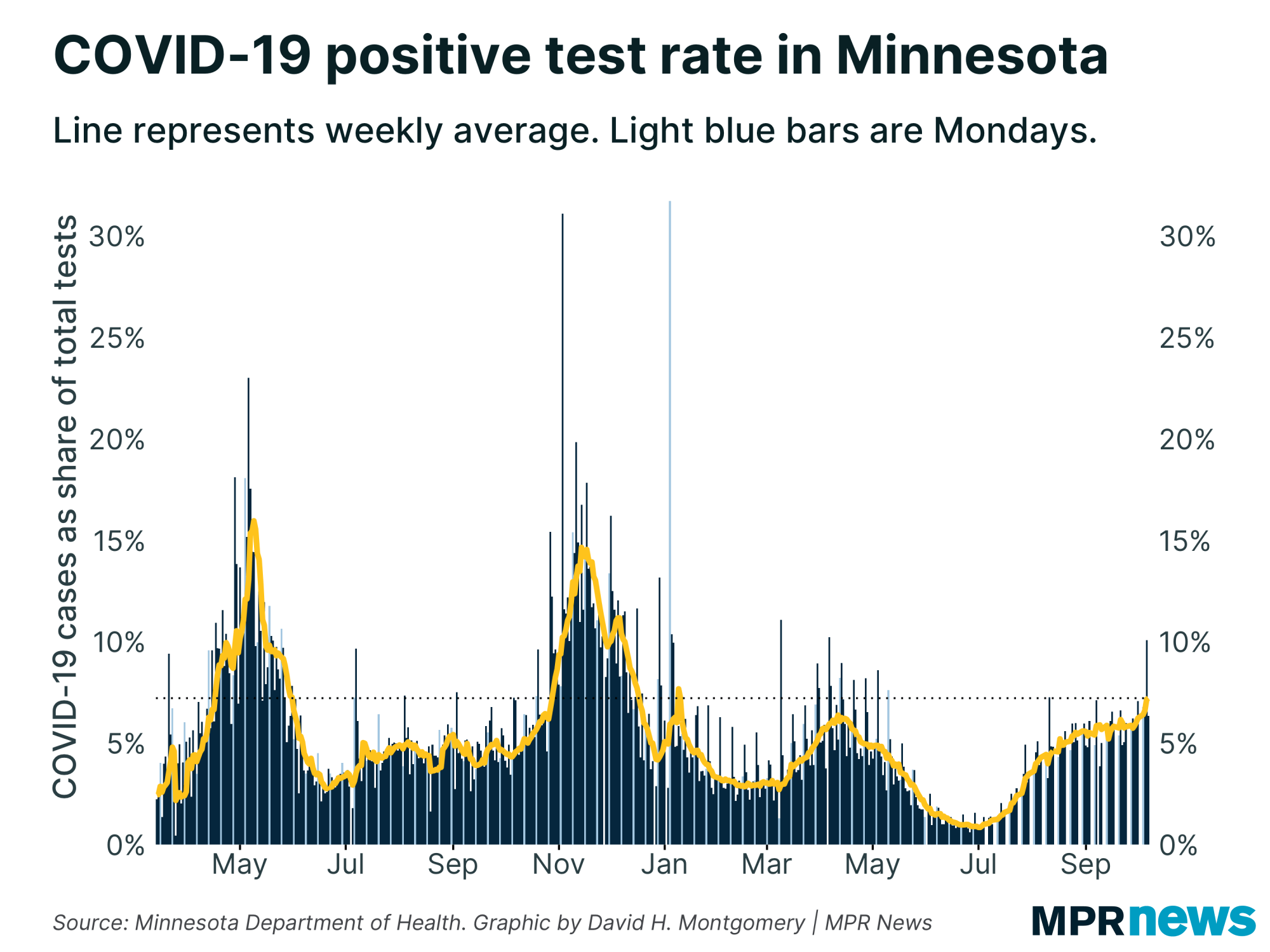 While the positive test rate is not leaping as it did in last year’s late-fall wave, it’s still rising. That’s an indication that the disease’s spread is growing.

The state's death toll stands at 8,275 including 32 deaths newly reported on Thursday. 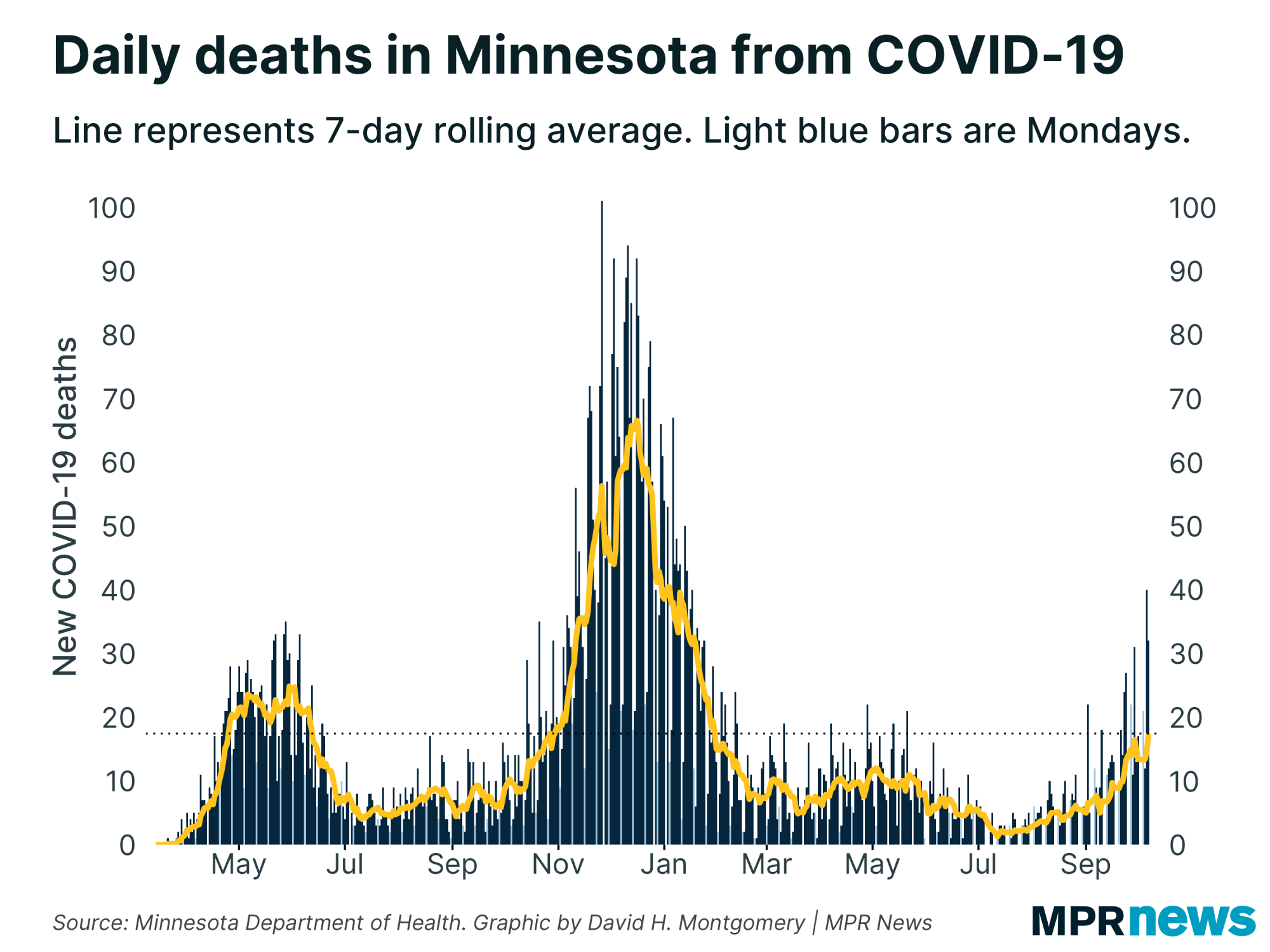 The entire state now shows a high level of COVID-19 transmission, according to the Centers for Disease Control and Prevention. Cook County in the Arrowhead had been the lone exception. 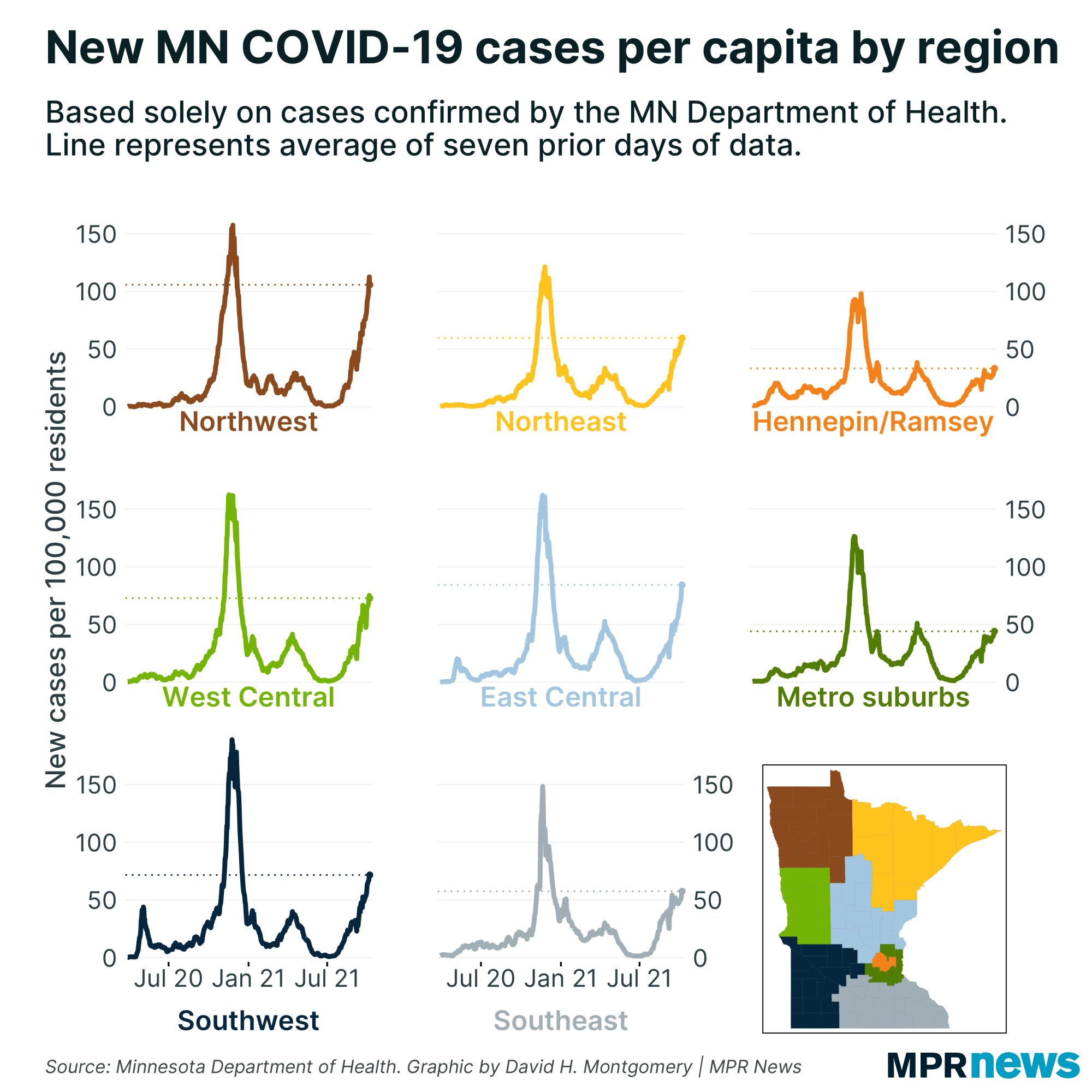 Generally, the state remains better positioned now than during its fall and spring spikes. More than 72 percent of state residents age 12 and older have received at least one vaccination shot, with 69 percent now completely vaccinated.

It remains a huge challenge, though, to get more Minnesotans vaccinated, and wide gaps remain in the vaccination rates among regions and counties.

To listen to an audio version of this story and read related reports, follow this link to the MPR News website. https://www.mprnews.org/story/2021/10/07/covid19-in-mn
Injuries