The Baptism River below Highway 61 at Tettegouche State Park on July 22. Rivers across the state are very low because of the severe drought encompassing much of the state.  Photo: Derek Montgomery for MPR News file

But this year, the river is a lot lower than usual. A trip that usually takes two to three hours now takes at least four, said owner and operator Ross Nelson. And he's had to cancel canoe excursions because of damage from boats hitting the bottom.

"My grandfather, when he built this old mill, he always said ‘I fought the river my whole life,’ and I'm kind of feeling his pain,” Nelson said.

Tubing and kayaking trips are still operating, but Nelson is hoping for rain — and not just for his business, but “for everybody’s sake.”

“The farmers need it, the lakes and ponds and rivers,” he said “We all need the rain."

Rivers across the state are very low because of the severe drought encompassing much of the state. That's affecting a lot of people who rely on rivers and streams for their livelihood.

‘You pray for rain’

For farmers such as Jacob Wildman, trying to keep crops alive during the severe drought has added another layer of strain to an already challenging profession.

"It's been very, very stressful,” said Wildman, a third-generation farmer near Glenwood and president of the Irrigators Association of Minnesota.

He and other farmers are having to irrigate more because of the lack of rain. Wildman said farmers he knows have been trying hard to conserve water as much as possible. That includes using technology such as moisture sensors to adjust irrigators, and turning them off altogether at the first hint of rain. 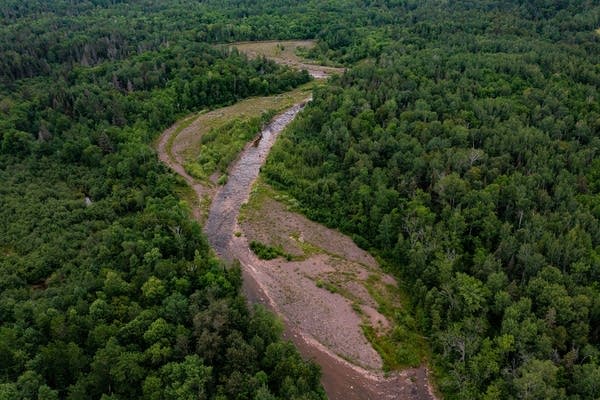 The Knife River near where it flows under Highway 61 is well below normal flow July 22, 2021 near Knife River, Minn.  Photo: Derek Montgomery for MPR News file

But state regulators have started limiting farmers and others from using water from rivers and streams for irrigation in areas where stream flows are low.

"You pray for rain. That's all you can do,” Wildman said. “I feel very bad for the guys that had to shut off earlier in the year and just watch their crop disappear."

The Minnesota Department of Natural Resources said Monday it has suspended or modified more than 80 permits to use surface water in at least 16 watersheds in north-central Minnesota, the Red River basin and near Rainy Lake.

The goal is to ensure that there's enough water available to flow downstream for people who rely on it for drinking water, said Randall Doneen, who manages conservation assistance and regulations for the DNR.

There’s also concern about the impacts of an extended drought and low-flow conditions on aquatic organisms.

While drought is a natural occurrence, its impact on a stream’s ecosystem depends on the drought’s severity and duration, said Jason Moeckel with the Minnesota DNR's ecological and water resources division.

But if that low flow continues — and the water temperature climbs — that can mean more stress for those fish and other organisms, Moeckel said.

Low streams and rivers also can mean there's less available water to dilute contaminants in the event of a pollution spill. And it can create ideal conditions for harmful algal blooms that thrive on nutrients, said Lee Ganske, who oversees the river monitoring network for the Minnesota Pollution Control Agency.

Ganske said they haven't seen serious problems tied to the low stream flows, such as severe algae blooms or fish kills — at least not yet.

"Without rain in the forecast, those flows are only going to continue to decrease,” he said. “And (there’s) at least the possibility that some of those more severe impacts could occur.” 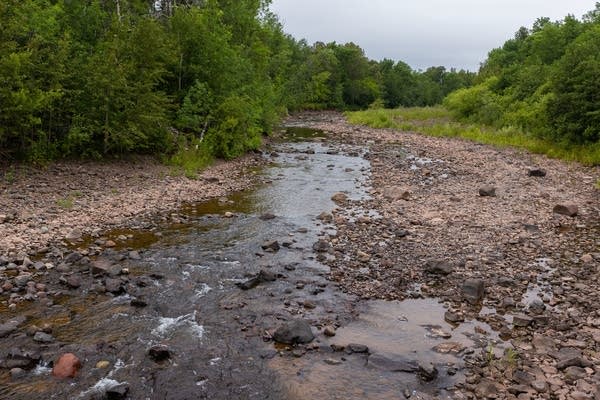 The drought-stricken Knife River near where it flows under Highway 61on July 22. Forecasters say the best chance for rain won't come until later this week.  Photo: Derek Montgomery for MPR News file

There are some positive benefits of the drought, too. The low-flow conditions give vegetation a chance to grow along river bottoms and stabilize stream banks.

“They can see a real bump from these sort of low-flow conditions,” Ganske said. “And that can have benefits that could last into subsequent years, even as flows return to more normal levels.”

The drought also means there's less water running off the land, carrying pollutants and sediment into rivers and streams.

Still, most people would say that a good soaking rain is exactly what Minnesota needs. Forecasters say the best chance for that won't come until later this week.

To see the original report and read related stories, follow this link to the MPR News website.  https://www.mprnews.org/story/2021/08/03/you-pray-for-rain-low-rivers-stressing-irrigators-recreatio...