When Minnesota Gov. Tim Walz walked into Jim Reitmeier’s wheat field, the top of the plants brushed his ankles. In a good year these plants would be nearly waist-high.

Reitmeier counted ten kernels in a ready-to-harvest head of wheat. Normally there would be about 30. 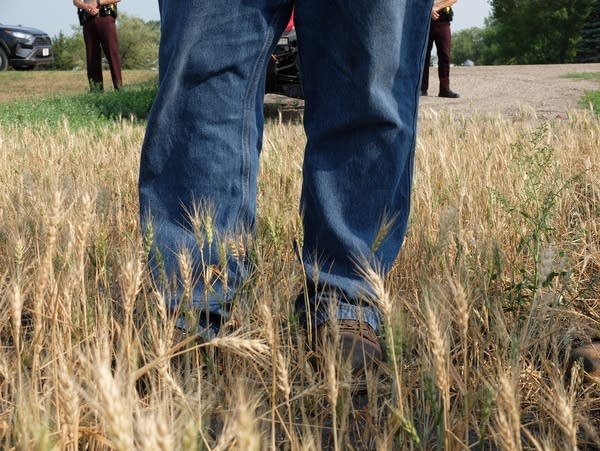 "What I worry about just candidly — I know it's down the road to worry about it — these things tend to come in two or three-year cycles, which is what we really don't need,” said Walz.

"I think your established farmers are going to stay,” said Reitmeier, “But your younger, more highly leveraged farmers, you start talking two, three years, you're going to start losing some of those."

Working land his family has owned since 1917, Reitmeier expects to continue farming. But he knows this will be a year to cut expenses.

"Just got to work through it and hope next year is better,” said Reitmeier. “That’s the way farming is — there’s ups and downs.”

Walz also met with about two dozen farmers in the cavernous farm shop.

"If you're like me, there's two things I'm refreshing: the Weather Channel and seeing if the damn radar shows up something, and the other one is the drought monitor," Walz told the group.

The U.S. Drought Monitor shows extreme drought has expandedin Minnesota in the past week and more than 70 percent of the state is now in severe drought.

While he saw crops stressed and damaged by the drought, the message Walz heard is that helping livestock farmers needs to be a priority.

Pastures and hay fields are drying up, and farmers trying to buy hay are competing with drought-stricken ranchers in North Dakota.

State Rep. John Burkel, R-Badger, told the governor he's hearing from farmers who have nothing to feed their cattle.

"I know we're concerned about their emotional health,” said Burkel. “I've gotten those calls with the wavering voice, wondering how many cattle they're going to have to sell. It's just important we get this done."

Walz and Agriculture Commissioner Thom Petersen both said opening state conservation lands and road ditches to haying and grazing is a priority.

They are asking federal officials to waive restrictions to allow for haying on land enrolled in the federal Conservation Reserve Program. Restrictions to protect nesting birds prevent opening some of that land. Petersen said he’s also working with The Nature Conservancy, which manages thousands of acres of conservation land in the state, to open some of that land for haying and grazing. 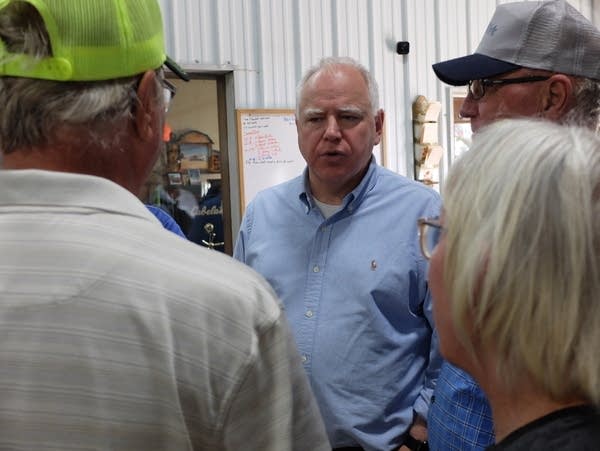 Walz said he’s made clear to state agencies that opening state lands to haying and grazing is a top priority.

Jim Reitmeier is getting ready to start harvesting his wheat later this week, and while wheat prices are high right now, he will have a sparse crop to sell.

"We will harvest it and see what we get. We've got federal crop insurance, so that'll help, but unfortunately I've got more wheat sold than I think I'm going to have, so I’m not going to be able to take advantage of these higher prices."

That's a conundrum many farmers are facing this year. They've pre-sold crops that they may not be able to harvest. To fill those contracts, they may need to buy grain.

Tim Dufault, who farms near Crookston, says the expected short harvest is also going to put local grain elevators in a crunch this fall.

"They book their freight trains based on harvest rush, and they're not going to see that this year, so they're scrambling trying to get rid of trains that they've got booked," he said.

And the ripple from those economic impacts could hit businesses in small towns that are still trying to recover from the pandemic.

Gov. Walz said the state may consider ways to make financial aid available for those small-town businesses if the drought continues.

To listen to the audio version of this report and see related drought stories, follow this link to the MPR News website.  https://www.mprnews.org/story/2021/07/22/drought-and-farmers