The smoke in Duluth, Minn., Tuesday morning from wildfires in Canada. The Minnesota Pollution Control Agency has issued an air quality alert for much of northern Minnesota.  Photo: Dan Kraker | MPR News 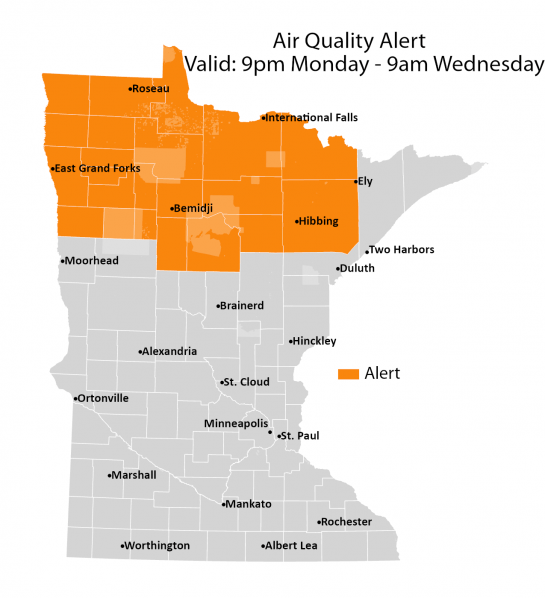 Fine particle levels are expected to be unhealthy for sensitive groups, such as people who have asthma or other breathing conditions, during this time, the MPCA said. The smoke will remain over the region until Wednesday morning, when winds push the smoke north and out of Minnesota, the agency said.

Over the weekend, rangers worked to reach campers spread across a vast swath of the Boundary Waters Canoe Area Wilderness that's now closed to visitors amid a growing threat from wildfires.

Added to a previous closure in place along the international border, the closure area now stretches east nearly to Basswood Lake, west nearly to Crane Lake, and south to the Echo Trail.

The area is being cleared of canoeists and hikers as a precaution as wildfires continue to burn unchecked just north of the border, in Ontario's Quetico Provincial Park. The fires were active over the weekend and the ongoing drought is making fire conditions more volatile — adding to the risk the Quetico fires may cross into the BWCA.

To see the original report and read related stories, follow this link to the MPR News website.  https://www.mprnews.org/story/2021/07/20/air-quality-alert-issued-in-northern-minnesota-over-canadia...