Superior National Forest officials on Saturday night issued a new, much larger temporary closure order for the Boundary Waters Canoe Area Wilderness north of Ely amid growing concerns about the threat posed by wildfires burning just across the Canadian border.

The newly expanded order, which takes effect Sunday, includes 12 more BWCA entry points and the area around Lac la Croix, in addition to the areas around Crooked and Iron lakes that had previously been included.

It now stretches east nearly to Basswood Lake, west nearly to Crane Lake, and south to the Echo Trail.

The closure orders are being prompted by wildfires burning unchecked just across the border in Ontario’s Quetico Provincial Park, that could cross into the BWCA. Forest Service officials say given the time required for campers to get out of the area, they’re acting now to get people out of harm’s way. And observations on Saturday heightened their concerns.

"Recent reconnaissance flights conducted by fire managers have indicated an increase in fire behavior (in Quetico), despite the lighter winds; and fuels in this area are pre-heating and becoming more volatile,” Superior National Forest officials said in a news release Saturday night.

“The Forest has enacted this closure order given the increased fire activity of the Canada fires, and the time required to locate and move BWCAW visitors out of the area if the wildfires spread into the U.S. and create hazardous conditions. … Travel times to these areas in the BWCAW are measured in days, not hours, and this would not allow for rapid evacuation of the area.”

The Mudro No. 22 and No. 23 entry points already had been under a closure order, along with Iron and Crooked lakes along the Canadian border north of Ely, as well as some smaller lakes north of Gun Lake.

The closure order will last at least seven days, or until the fire danger has subsided.

“The Forest will be canceling quota permit reservations for the entry points listed. Those with reservations will be contacted, reimbursed and redirected to other areas of the Forest that do not require BWCAW quota permits,” the news release stated. Rangers were out in the closure area on Saturday to contact canoeists and hikers.

A group of more than a dozen Forest Service and firefighting personnel also was set to venture into the BWCA on Saturday “to the Curtain Falls area on a scouting mission to assess any public safety concerns and develop a plan to apply direct or indirect suppression tactics" if the wildfires in Quetico Provincial Park cross into Minnesota, authorities reported in a Saturday morning update.

Curtain Falls is between Crooked and Iron lakes north of Ely.

Ontario crews are "not actively managing these wildfires due to their remote location, the lack of resources, and the need to address (fires affecting) northern Ontario villages," U.S. authorities reported Friday. U.S. firefighting personnel are now conducting daily flights to monitor the Quetico fires. 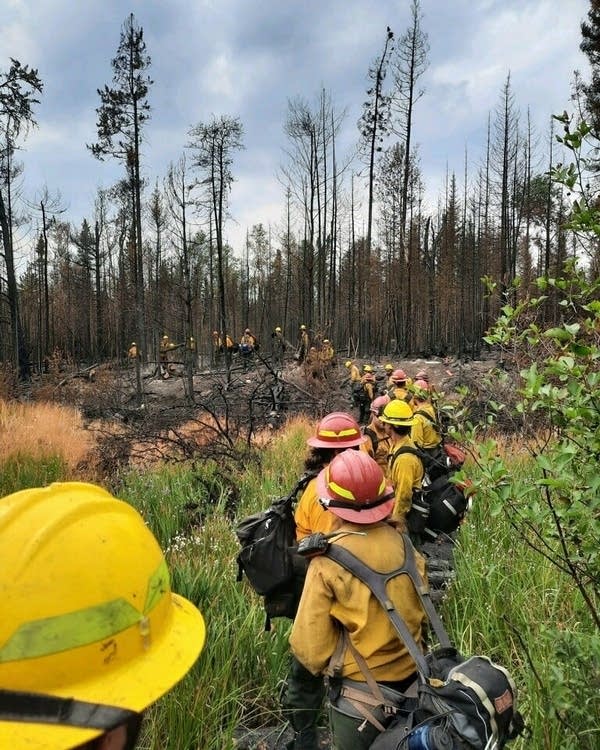 Meanwhile the Delta Lake fire east of Ely remained at 65 acres Saturday, with containment up to 10 percent as nearly 200 firefighters work to douse the flames.

"Now that hose surrounds the entire fire perimeter, mop-up operations will begin, but will be a long tedious process in the dense fuels," authorities reported Saturday morning.

The Delta Lake fire is burning in a blowdown area, with downed timber stacked waist- to chest-high in places. Aircraft have been dropping water to assist crews on the ground.

A temporary BWCA closure order remains in place near the Delta Lake fire, which is burning just outside the wilderness boundary.

Because of ongoing drought conditions and increased fire danger, a temporary ban on most campfires in the Superior National Forest also remains in place. The ban includes all campfires in the BWCA. Elsewhere in the forest, campfires are allowed only in Forest Service-installed fire structures in developed, fee campgrounds.

To read the original story and read regular wildfire updates, follow this link to the MPR News website.  https://www.mprnews.org/story/2021/07/17/forest-service-expands-boundary-waters-closure-north-of-ely...