'We are all competing for limited resources': Calls for more help in forest fire-plagued northwestern Ontario A photo by Amanda Sainnawap shows the haze and glow from nearby forest fires as she self-evacuated from Pikangikum on Monday afternoon in northwestern Ontario. With dozens of fires burning, community leaders are calling for more help with resources. Photo: Submitted by Amanda Sainnawap

With northwestern Ontario now under an emergency order issued by the province, calls are growing for more support to keep community members safe as over 90 forest fires continue to burn across the region.

As of Wednesday, three First Nations and one municipality in the northwest had begun partial evacuations, including Deer Lake, where the vulnerable population — including the elderly and children — have since left the community.

According to David Meekis, the band councillor, the process has had challenges.

On Tuesday, Meekis said the First Nation was told two CC-130 Hercules military transport aircraft were scheduled to come into the community, so the evacuation team scrambled to find and transport 140 residents to the airport in time. But after a couple of hours of waiting in the local school gymnasium, only one of the planes had arrived.

"Then we have to tell our community, like half of them, 70 people, that they're no longer going," Meekis said. "They weren't too happy."

At other times, the smoke cover has been too thick for planes to safely land, Meekis added.

He told CBC News that these are examples of just how quickly evacuation plans and logistics are changing as teams arrange for the safe transportation and lodging of people in communities across the province.

As of Wednesday afternoon, more than 500 people had been flown out of Deer Lake First Nation — brought to either Thunder Bay, Cochrane or Cornwall — and there were fewer than 100 people from the first phase of evacuations who remained in the First Nation.

Meekis said First Nation leadership is waiting to see what will happen to the large forest fire burning about 30 kilometres west of Deer Lake, before deciding whether to call for a complete evacuation. 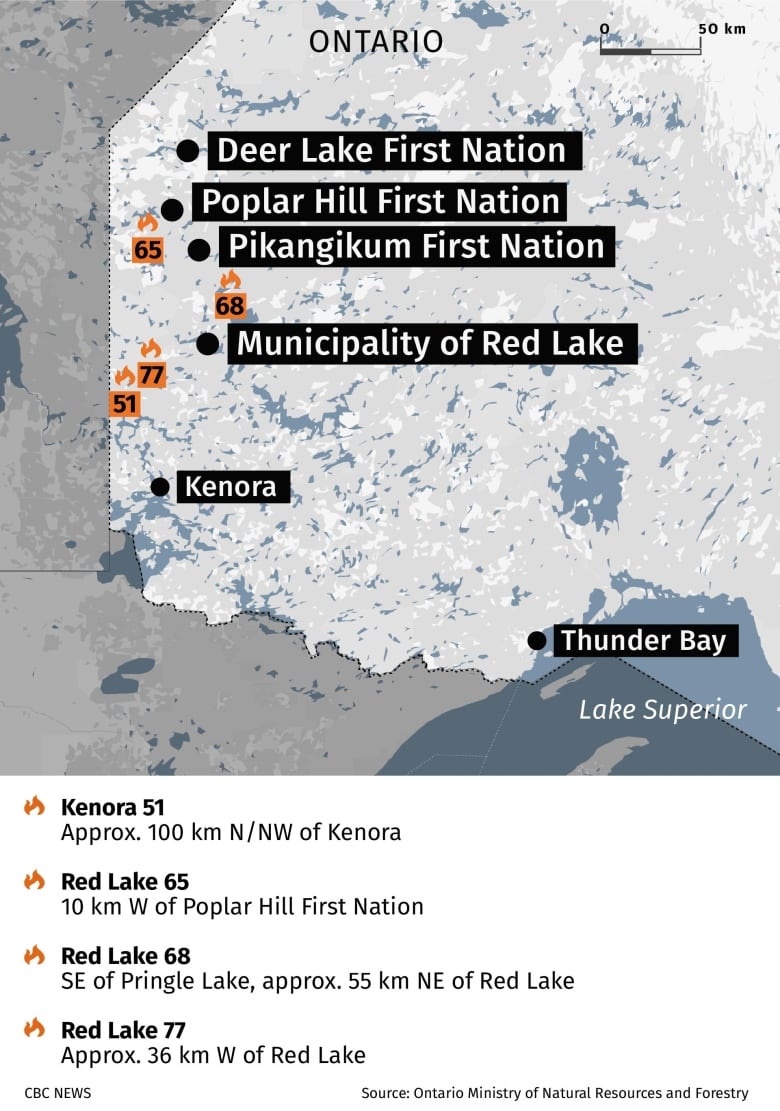 Out of the dozens of forest fires burning in northwestern Ontario, four of note are concerning fire suppression officers and surrounding communities. In the last four days, Deer Lake First Nation, Poplar Hill First Nation and Pikangikum First Nation have begun partial evacuations. Red Lake municipality has warned residents to be prepared to leave, while some have already fled. Graphic: CBC News

Limited resources to support the wider evacuation in Pikangikum First Nation has also been top of mind for community leadership. As Chief Dean Owen said in a written statement: "With so many communities being evacuated due to the fires, we are all competing for limited resources and space."

On Wednesday, the Ontario Ministry of Northern Development, Mines, Natural Resources and Forestry (MNRF) issued an emergency order, allowing the government to "take special measures to ensure the safety of people and the protection of critical property."

The ministry's Aviation, Forest Fire and Emergency Services agency (AFFES) said the emergency order allows the province to invoke such measures as travel or access restrictions within an identified area.

'Lungs of the province going up in flames'

About 100 kilometres from Pikangikum, Fred Mota, mayor of Red Lake, has declared a state of emergency in his own municipality. He said that as the fire situation evolves, the province has been in "full support" of efforts on the ground in that community.

Mota has urged residents to prepare for a possible evacuation, adding that the two fires of concern, burning approximately 20 kilometres from the township, are at risk of combining and creating a larger blaze.

"Just to put this in perspective, the rate of the fire, at my last meeting with the local MNRF, they're suggesting this fire is burning 40 metres every minute. So it's very fast, it's very dry out there, and this could be a very long haul for the municipality of Red Lake and our surrounding area," he said in an interview with CBC News.

For Catherine Reilly, a new resident to the Red Lake area, the last few days arranging potential evacuation plans have been stressful, especially when it comes to planning accommodation for herself and her pets.

Reilly said that as a resident in the northwest, she feels the region is forgotten, especially when it comes to resources and attention given to forest fires by the federal and provincial governments.

"The fact that it's happening up here, this is the lungs of the province going up in flames and nobody seems to care."

Reilly echoed concerns of First Nations leaders in the region voiced earlier this week, criticizing the level of urgency and preparedness of the government responses to the forest fire "crisis."

NDP MPP Sol Mamakwa also called on Ontario Premier Doug Ford on Wednesday to "hurry up" help being made available to families left to evacuate their communities.

"Doug Ford should have taken action long ago with fire preparations knowing that forest fires would be raging across northwestern Ontario during the fire season," said Mamakwa in a statement. "His lack of readiness has left people in danger and unsupported. He needs to move quickly now, and provide emergency resources and co-ordinate the evacuation of families from multiple communities." 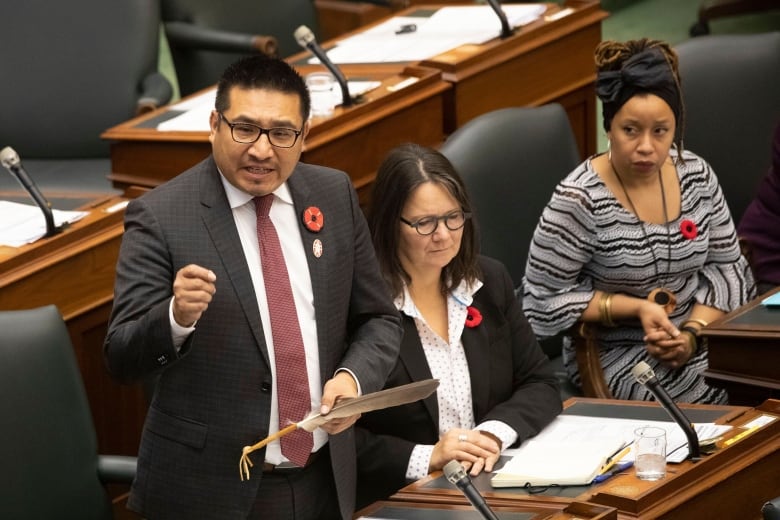 NDP MPP Sol Mamakwa, representing the Ontario riding of Kiiwetinoong, says evacuating northern First Nations could be harmful if the proper supports are not available to evacuees. Photo: Supplied by Sol Mamakwa

The MPP, who represents the northern riding of Kiiwetinoong, stressed the importance of the government making all aviation assets available now and providing more accommodations immediately to evacuees.

In a statement to CBC regarding concerns about insufficient resources available to evacuate communities, a spokesperson for the Ministry of the Solicitor General said critical supports and services will be provided by municipalities acting as hosts, with reimbursement from Ottawa.

"Consistent with its role to co-ordinate provincial resources in an emergency response and the service funding agreement with the federal government, the province actively plans for potential evacuations due to the risk of wildfires on an annual basis," said Brent Ross. "This planning has occurred in collaboration with municipal, federal and First Nation partners."

To see the original story and stay up to date on Northwestern Ontario fires, follow this link to the CBC Thunder Bay website. https://www.cbc.ca/news/canada/thunder-bay/northwestern-ontario-forest-fires-calls-for-resources-1.6...