Minnesota’s seeing COVID-19 counts edge higher, although there are no signs the state is headed for another surge like it saw in mid-April. New daily cases are up, but key metrics continue to hover at relatively low levels.

Officials do remain concerned about the growth of the highly contagious COVID-19 delta variant among the state’s unvaccinated population. Cases are up among Black Minnesotans, who have a much lower vaccination rate compared to whites or Minnesotans of Asian descent. 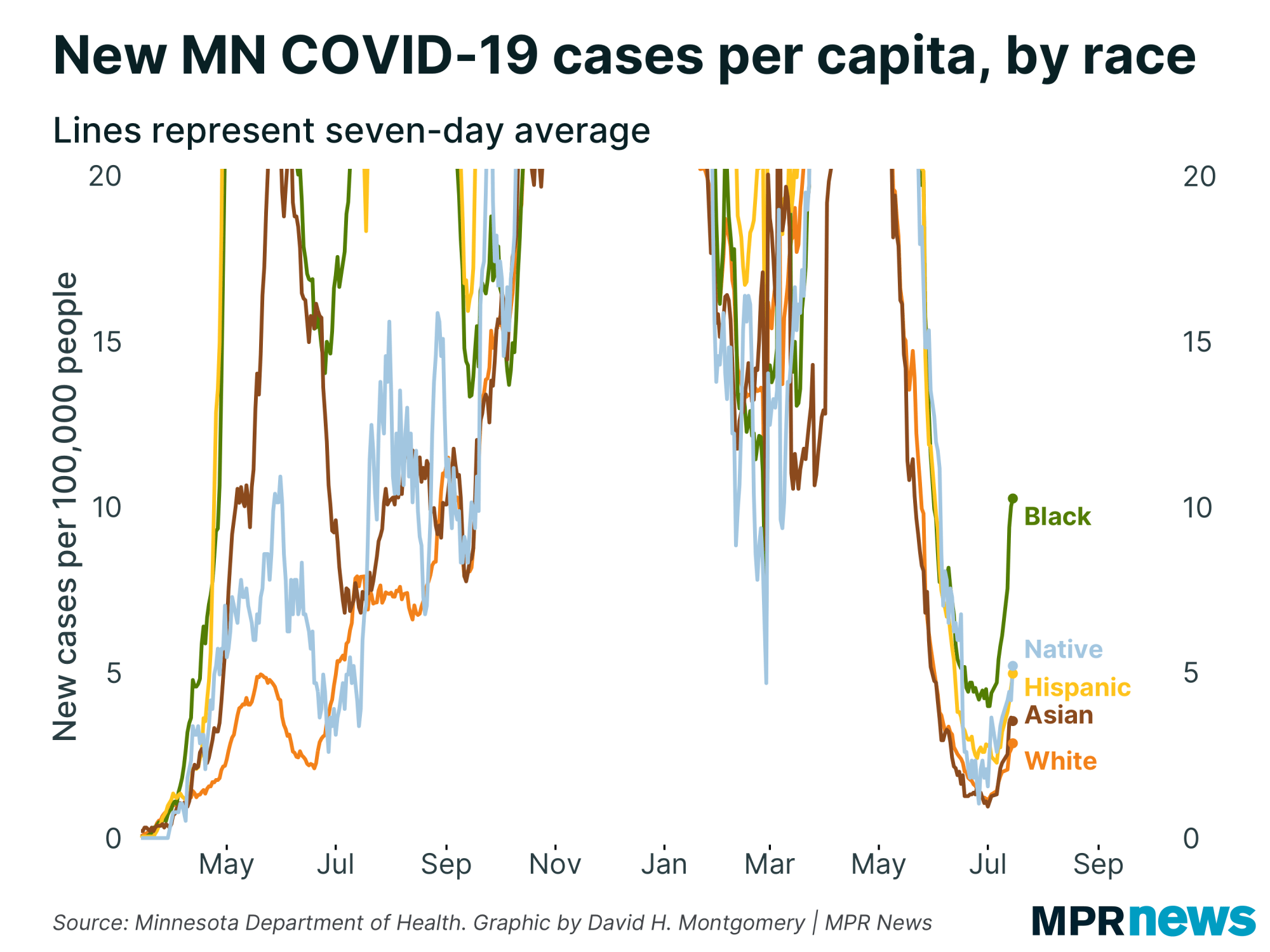 More Minnesotans are vaccinated now — including 9 in 10 residents 65 and older — and the percentage of COVID-19 tests coming back positive averaged about 1 percent over the past reporting week, far lower than the 5 percent officials find concerning.

Known, active COVID-19 cases in Minnesota came in at 1,256 in Thursday’s report. The seven-day trend ticked up just above 1,000 for the first time in three weeks. Still, counts are down dramatically since May 1, when Minnesota had more than 15,000 active cases. 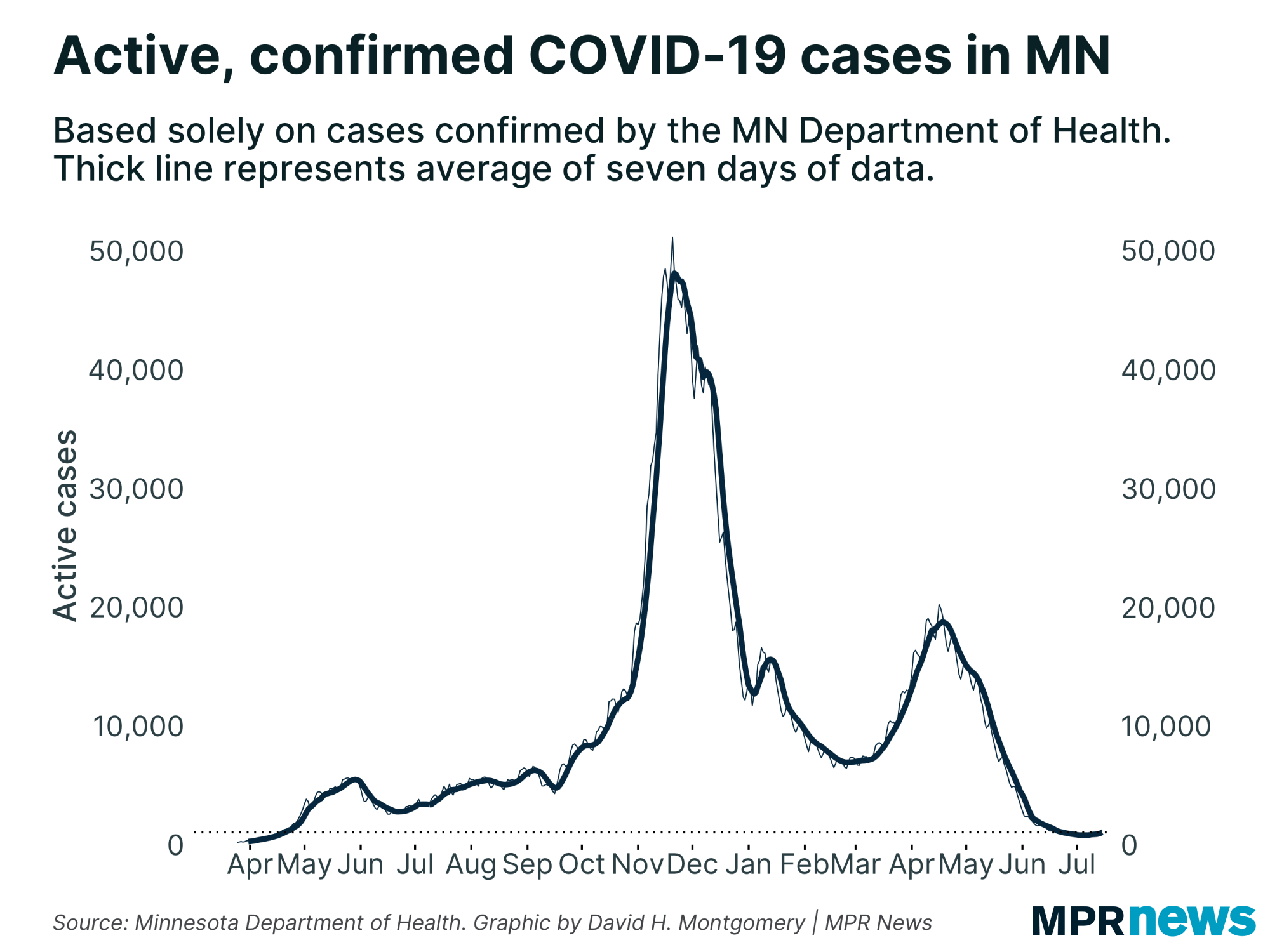 Ninety patients are in Minnesota hospitals with COVID-19, with 19 in intensive care. Those counts have stayed relatively steady the past few weeks. 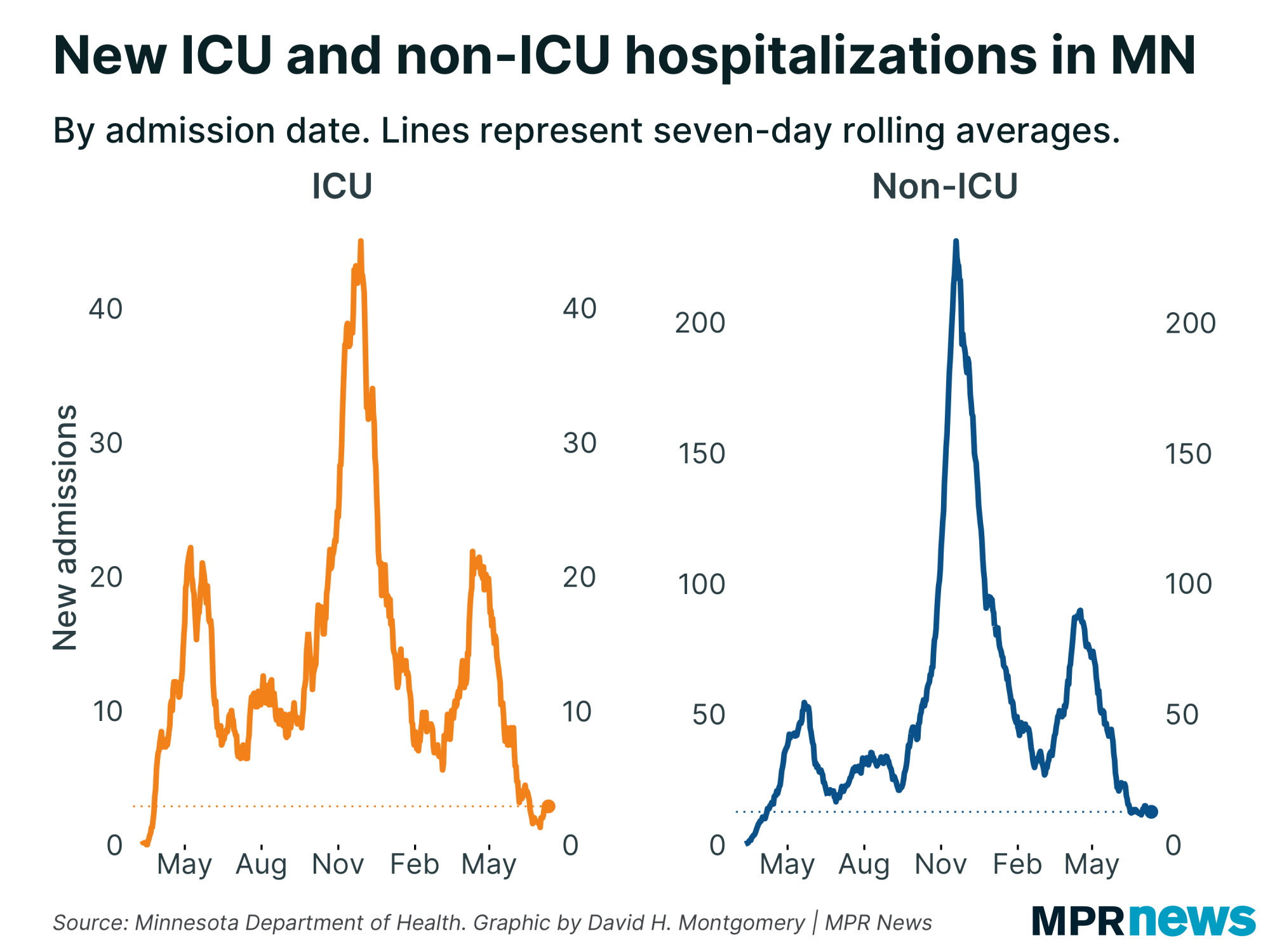 Given the recent uptick in caseloads, that may rise. Still, the current hospitalization count is at its lowest point since the Health Department began reporting the data more than a year ago.

Two newly reported deaths on Thursday raised Minnesota’s pandemic toll to 7,632. Among those who have died, about 59 percent had been living in long-term care or assisted living facilities; most had underlying health problems. 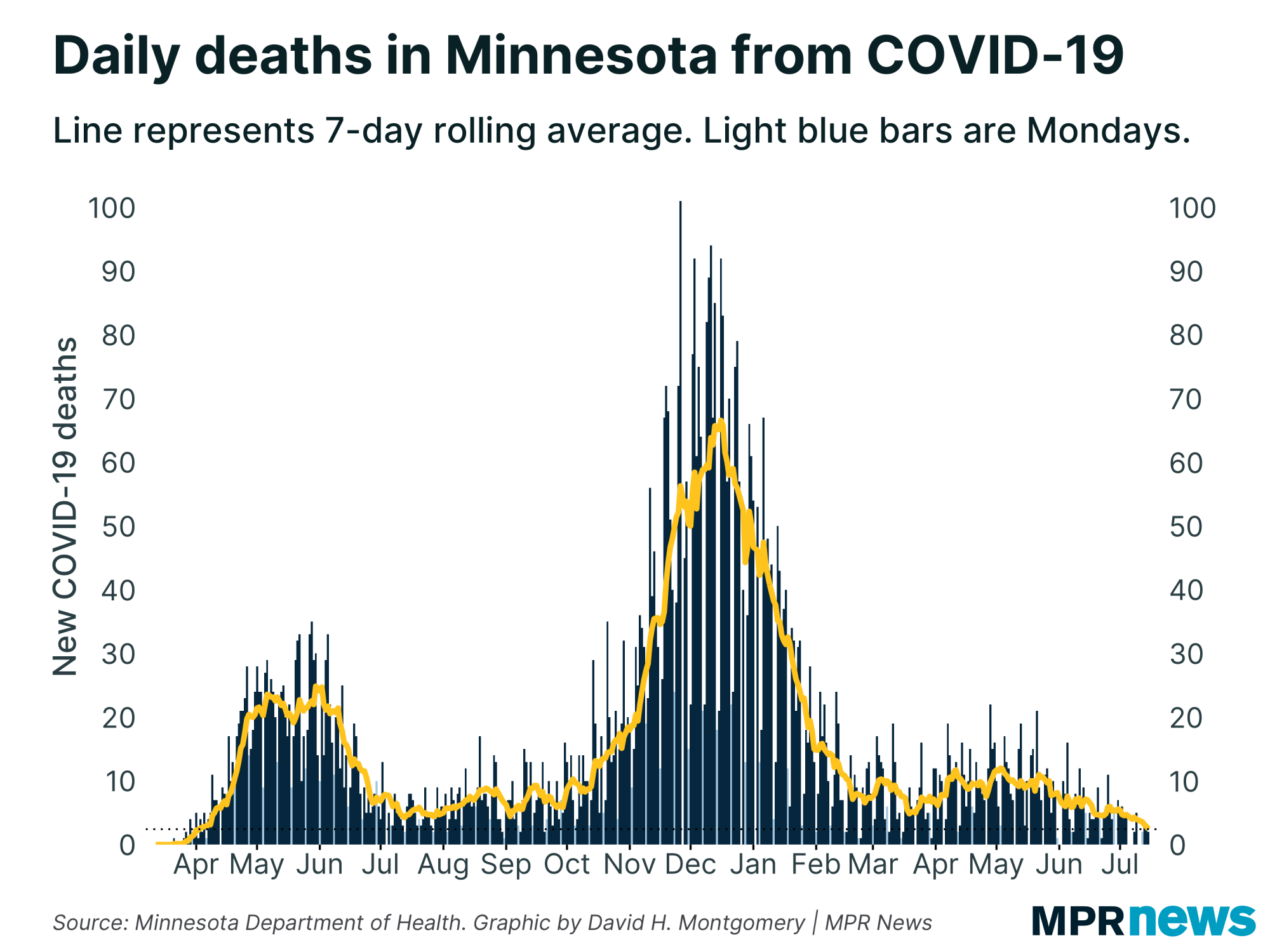 The state’s recorded 607,278 total confirmed or probable cases in the pandemic, including the 216 posted Thursday. Roughly 99 percent of Minnesotans known to be infected with COVID-19 have recovered to the point where they no longer need to isolate. 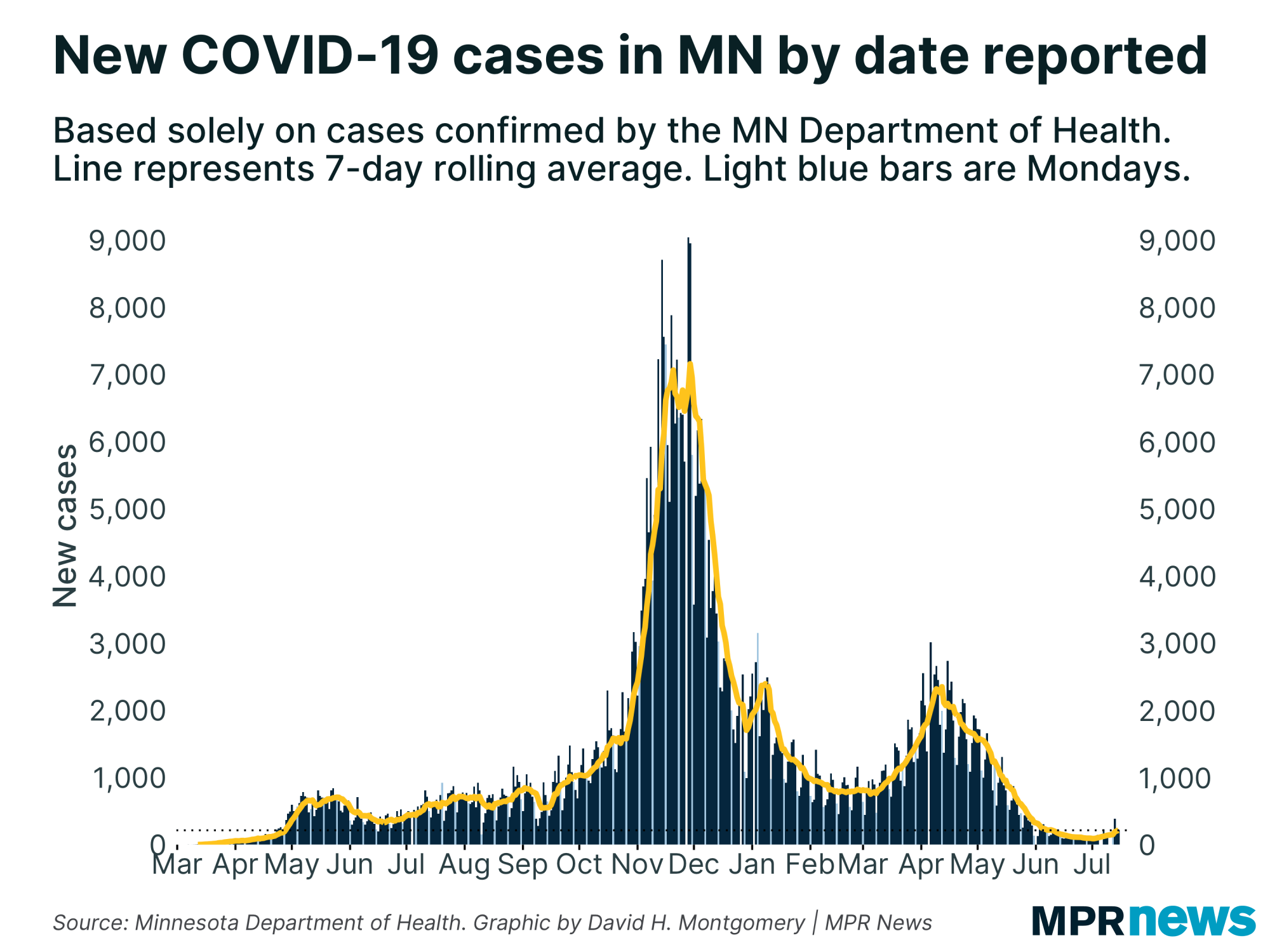 Regionally, caseloads are up in the southeast and in east-central Minnesota, as well as the Twin Cities area. Conditions, though, remain far better than during the mid-April wave and the huge late fall surge. 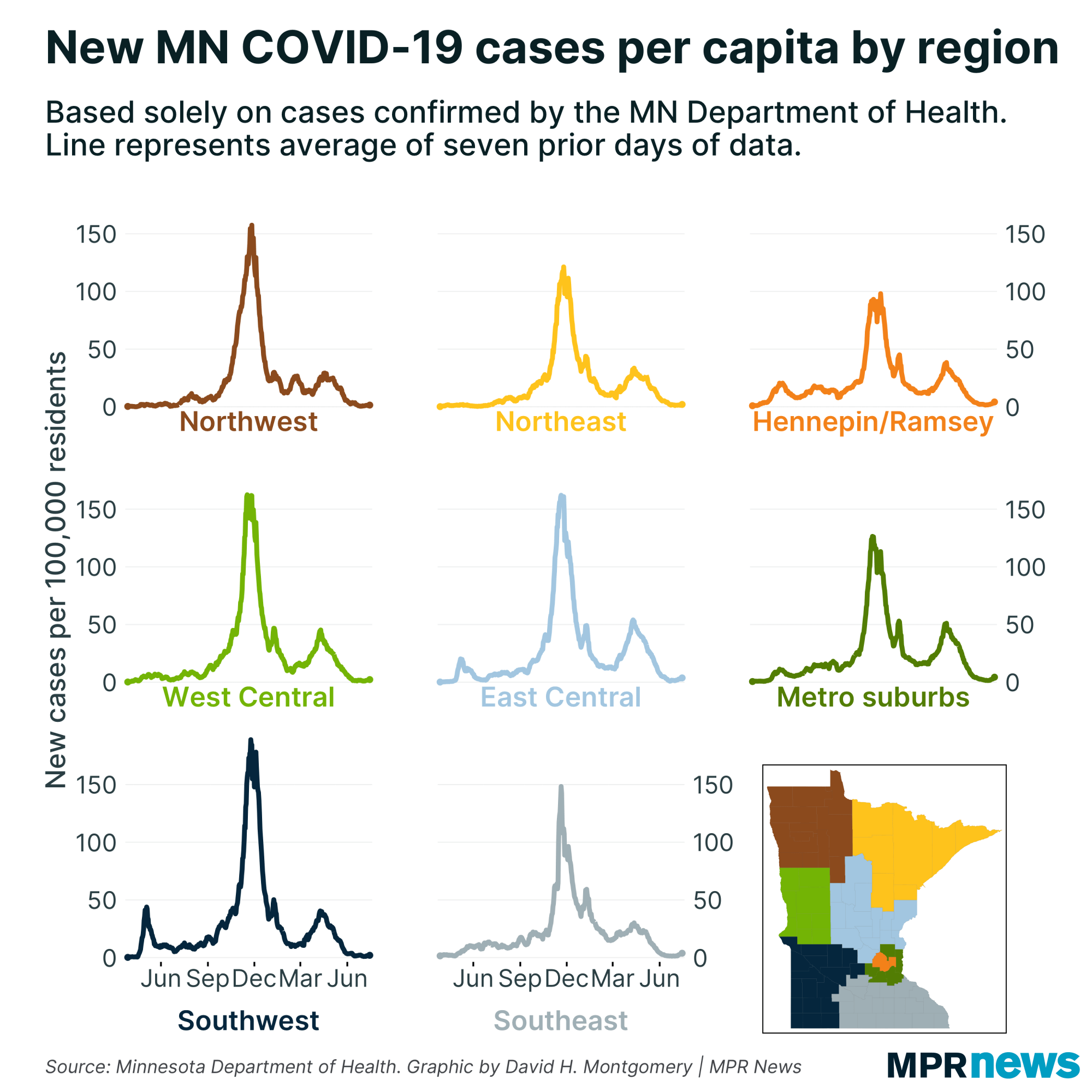 Add in more than 113,000 12-to-15-year-olds with at least one dose and Minnesota has topped 3 million residents with one or more shots. About 53 percent of the state’s total population is now completely vaccinated. 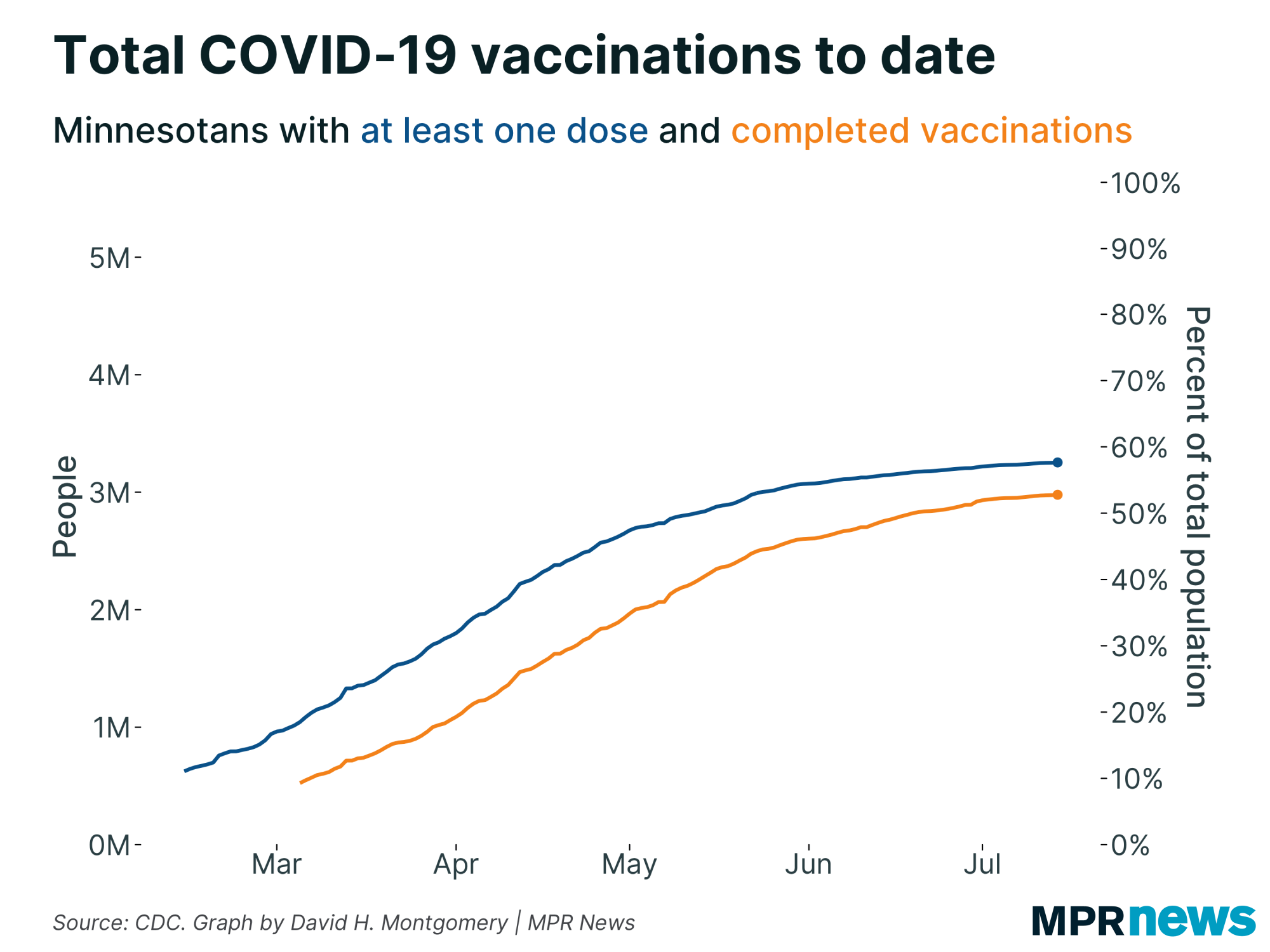 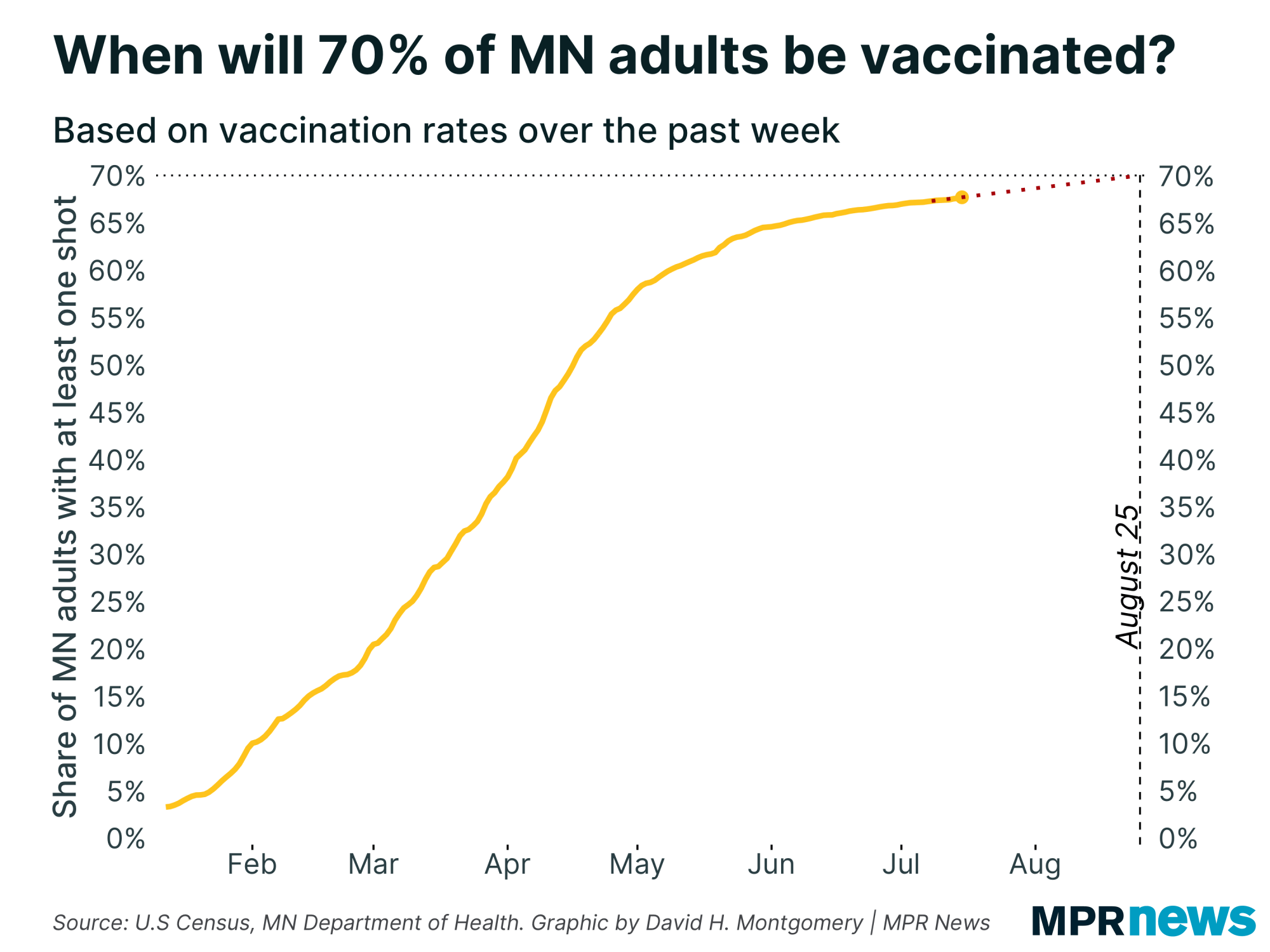 The vaccination pace is also lagging among Minnesota’s Latino, Black and Indigenous populations. 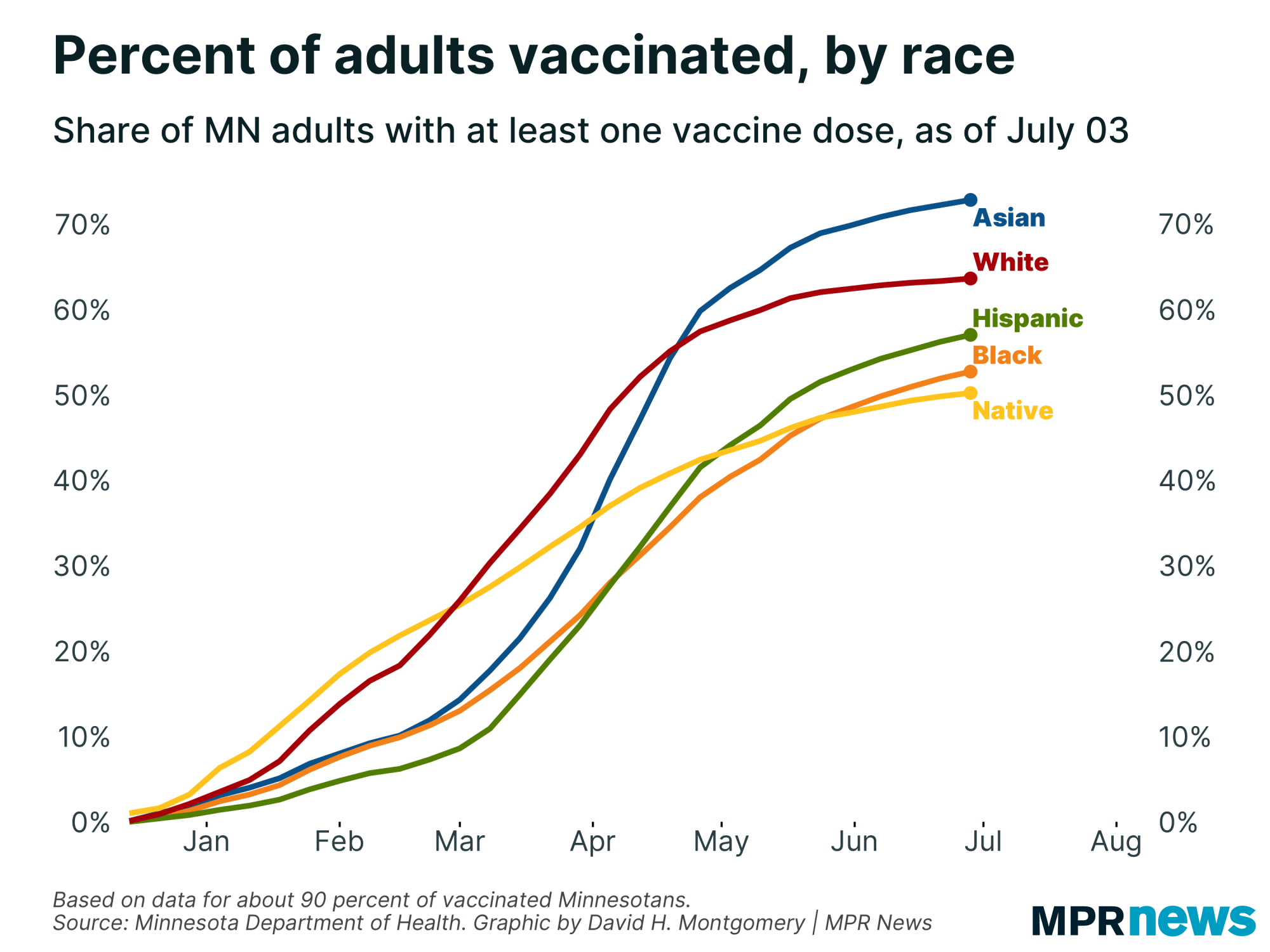 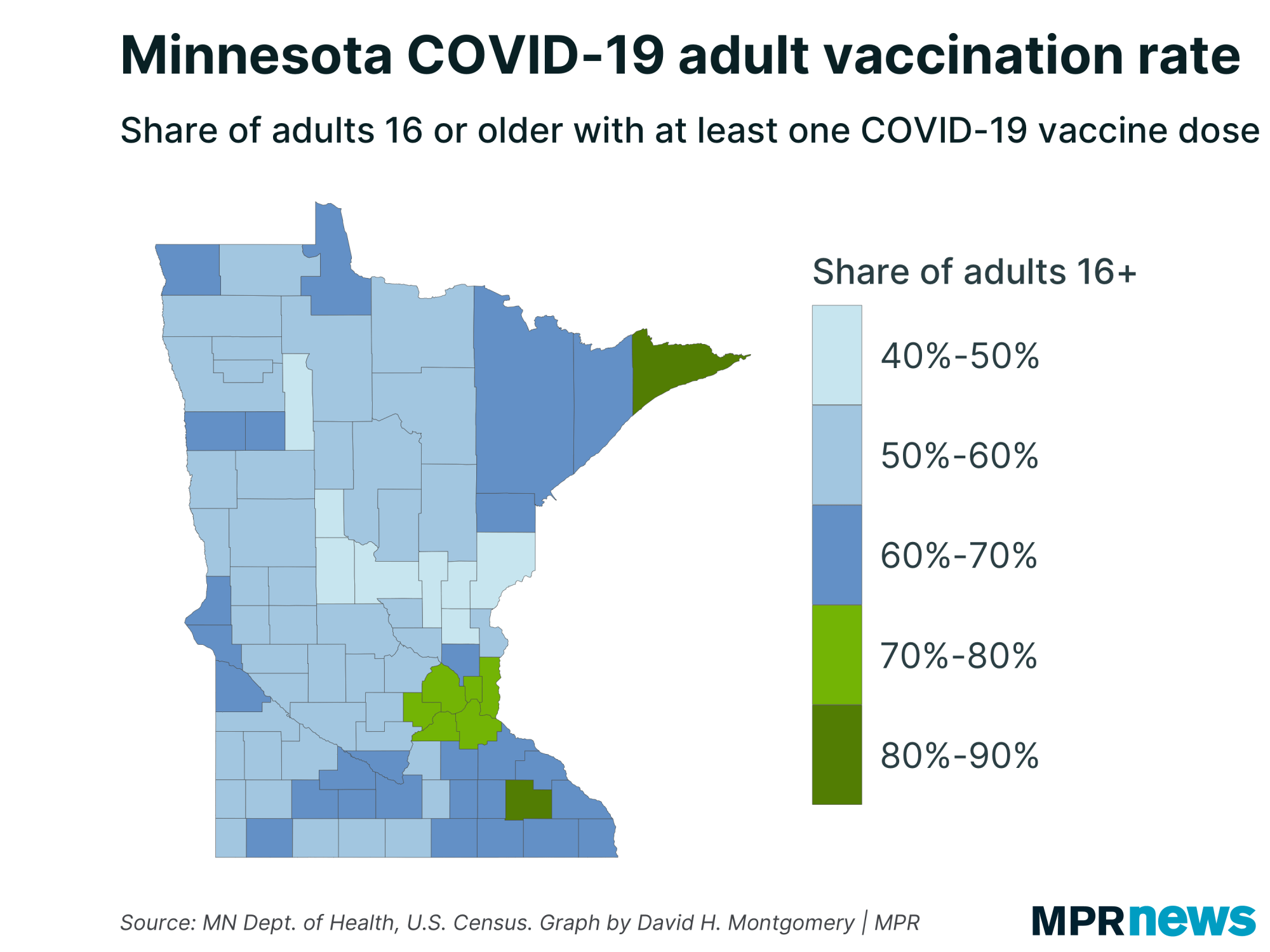 Editor's note: With the pandemic largely in check, we’ll be ending our daily "Latest on COVID-19 in MN" story on Saturday. In its place, we'll write a weekly summary story that we'll post on Fridays. You'll still be able to find updated graphics and data on our COVID-19 story collection page. And you can count on us to continue covering the pandemic.