Muddy riverbanks are exposed along the Minnesota River near the Highway 19 bridge at Henderson, Minn., on Tuesday. The river stage that morning was 715.6 feet and falling — putting it among the top 10 lowest water levels on record for that stretch of the river, as drought conditions cover much of Minnesota.  Photo: Andrew Krueger | MPR News

Drought is expanding in Minnesota, with most of the state abnormally dry or in moderate drought. Small pockets are in severe drought, mostly along the border with Iowa, as well as some areas on the northwestern edge of the state, the U.S. Drought Monitor map released Thursday shows.

Jared Goplen, a University of Minnesota Extension educator based in Morris, where the area is quite dry, works mostly with farmers and crop consultants. He said crops affected include small grains like wheat, rye and barley, plus forage crops, such as alfalfa and grasses.

"There is some drought stress that has been becoming more obvious on corn and soybean in some pockets,” Goplin said. “But for the most part, we're early enough that if we do receive timely rainfalls, we'll probably be okay." 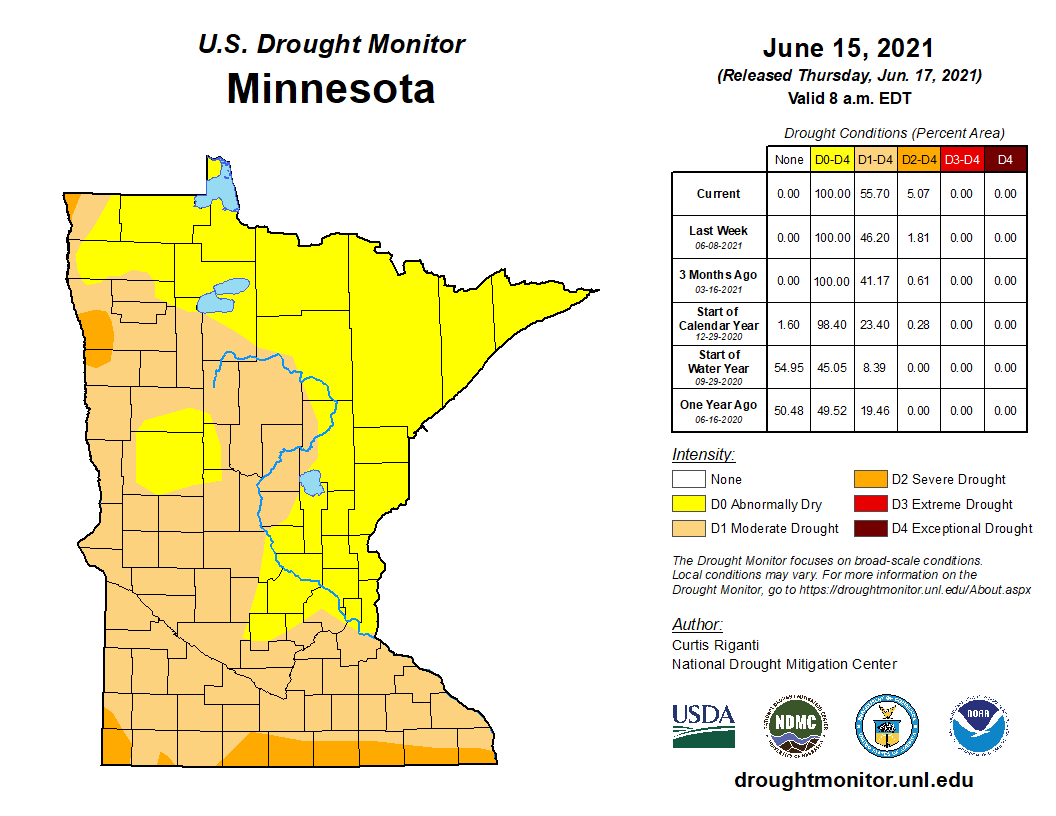 The dry weather has also put much of the state under high to extreme risk of forest fires.

According to the DNR, much of the northwest quadrant is under extreme fire danger, and most of the rest of northern Minnesota is under a very high fire danger.

Nick Petrack, engine captain for the Laurentian Ranger District in the Superior National Forest said the number of fire starts so far this year have actually been down, but there hasn't been as much greening of the forest as you'd expect by this time of year.

“If I use the word normal… I don't know if I can use that anymore. But we would tend to get greened up and then kind of move on as the summer moves into more of a fire season. But what we have not seen is a break, the last couple seasons have been very active for us in June,” Petrack said.

He said the Forest Service lit some prescribed burns and other fire prevention measures earlier in the spring.

Petrack does ask that people be very careful and considerate when starting fires while camping.

“Just using good campfire knowledge, you know, having water available. When you're done, extinguish it, stir water into it, make sure it's cold to the touch and not leaving any campfires unattended.”

While forests and crops need more rain, so do the state’s rivers, which are near record lows. 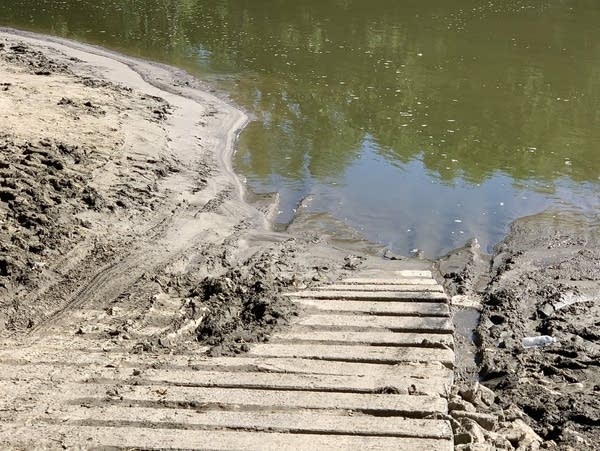 The Minnesota River at Henderson, Minn., was running so low on Tuesday that this boat launch appeared nearly unusable without risk of getting stuck in the mud.  Photo: Andrew Krueger | MPR News

The St. Croix river at Stillwater, is just inches above the low record set in 1988. The Mississippi river in St. Paul is also just above its lowest point, although Corps of Engineers dams influence the flow.

Mike Welvaert, a hydrologist with the North Central River Forecast Center in Chanhassen, said the low water has been coming for months.

“We didn't get that much snow, so the reservoirs weren't able to fill up as much as they would like, so they can't release as much water that would keep the river levels up further downstream and such,” Welvaert said. “And then the soils were drier because there wasn't that much snow to soak in and get the soils moistened up for the year.”

The dark clouds on the horizon are good news. Rain is expected across much of the state on Sunday.

To hear an audio version of this story and read related reporting, following this link to the MPR News website.  https://www.mprnews.org/story/2021/06/17/drought-conditions-worsen-across-minnesota