The state’s averaging fewer than four new daily COVID-19 cases per 100,000 people currently, compared to a peak of nearly 130 in November. Tuesday’s report showed only 125 new cases, basically a level not seen since the earliest days of the pandemic.

Known, active cases remain below 2,000 and at their lowest point since April 2020. Hospitalizations and ICU needs are less than half of what they were a month ago.

While the disease metrics remain encouraging, the vaccination rate has slowed to a relative trickle, making it extremely unlikely the state will reach its goal of getting at least one vaccine dose into 70 percent of the state’s 16-and-older population by July 1.

State public health leaders worried throughout the pandemic that Minnesota hospitals would be overwhelmed by a crush of COVID-19 patients needing treatment or an ICU bed. Those worries have all but abated in recent weeks.

The latest Health Department report shows 201 people hospitalized with COVID-19 in Minnesota; 57 in intensive care. Both figures continue to trend down from their spring peaks. In late April, hospitalizations were approaching 700 people, with more than 200 in ICUs.

Average daily hospital admissions have fallen by more than half over the past month and are trending at levels not seen since last summer. 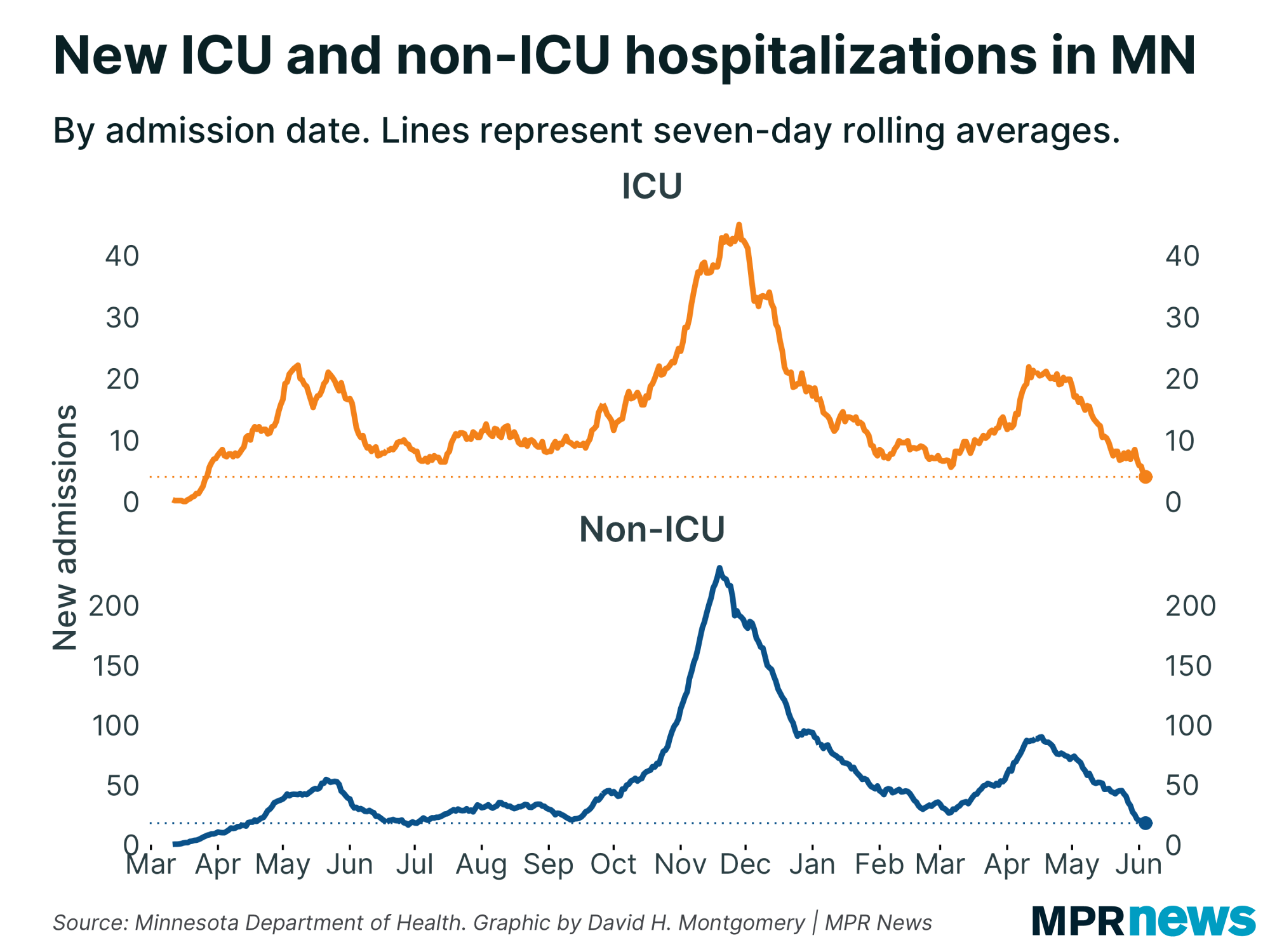 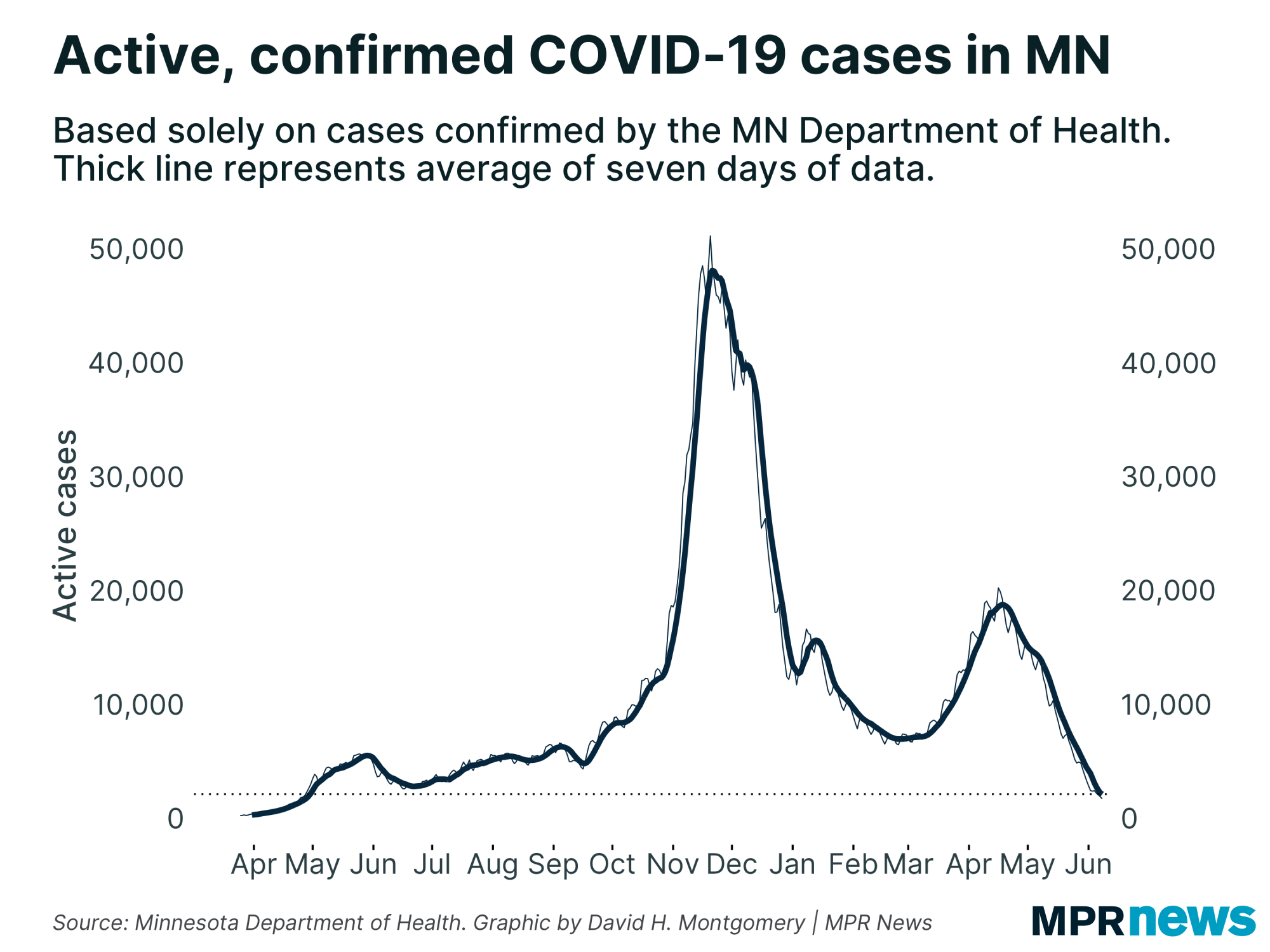 The state’s averaged 231 new cases a day over the past seven reporting days. Five weeks ago, that count topped 1,500 a day.

Two newly reported deaths on Tuesday put Minnesota’s pandemic toll at 7,469. Among those who have died, about 59 percent had been living in long-term care or assisted-living facilities; most had underlying health problems. 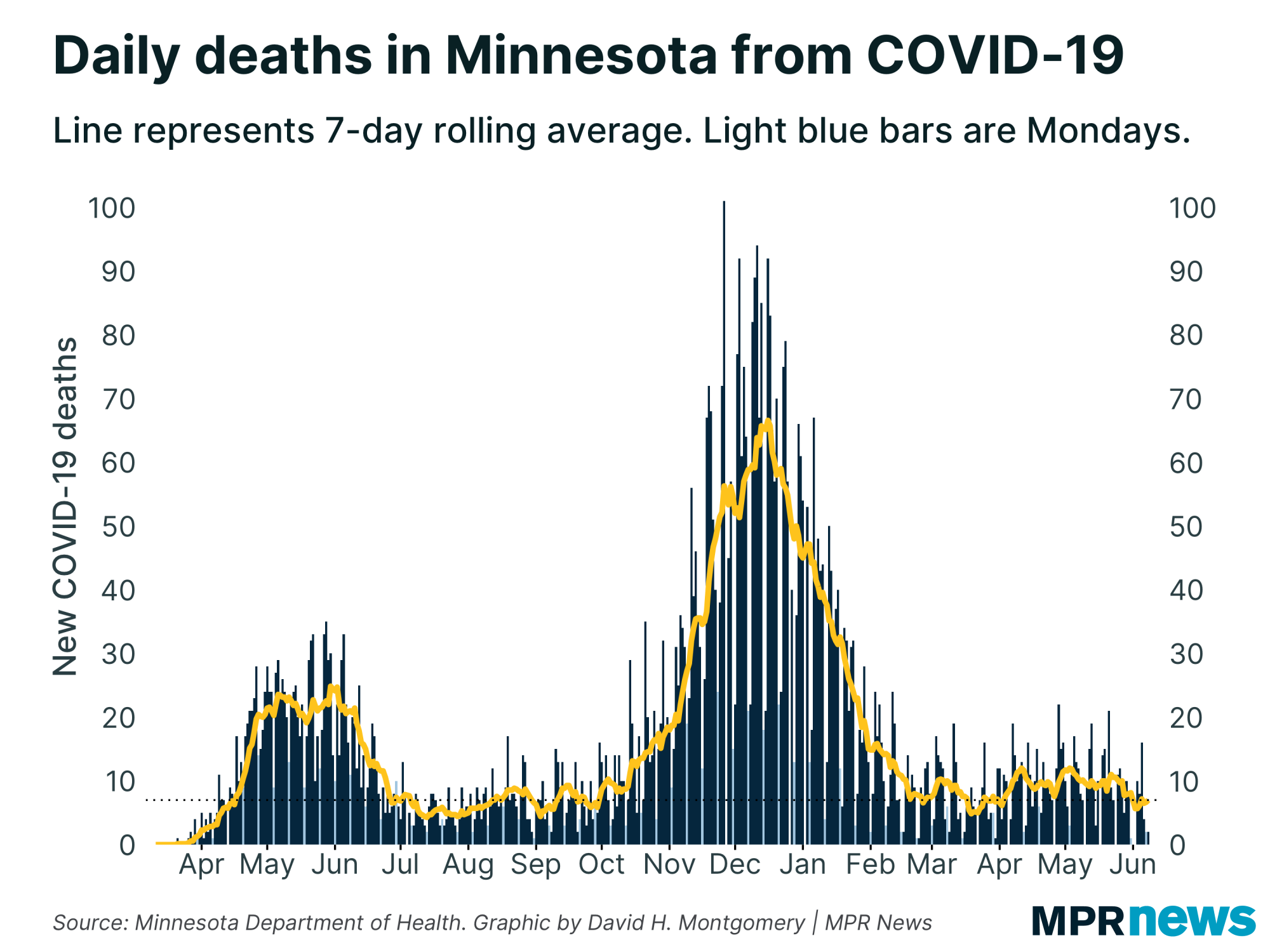 The state recorded 603,005 total confirmed or probable cases so far in the pandemic, including the 125 posted Tuesday. 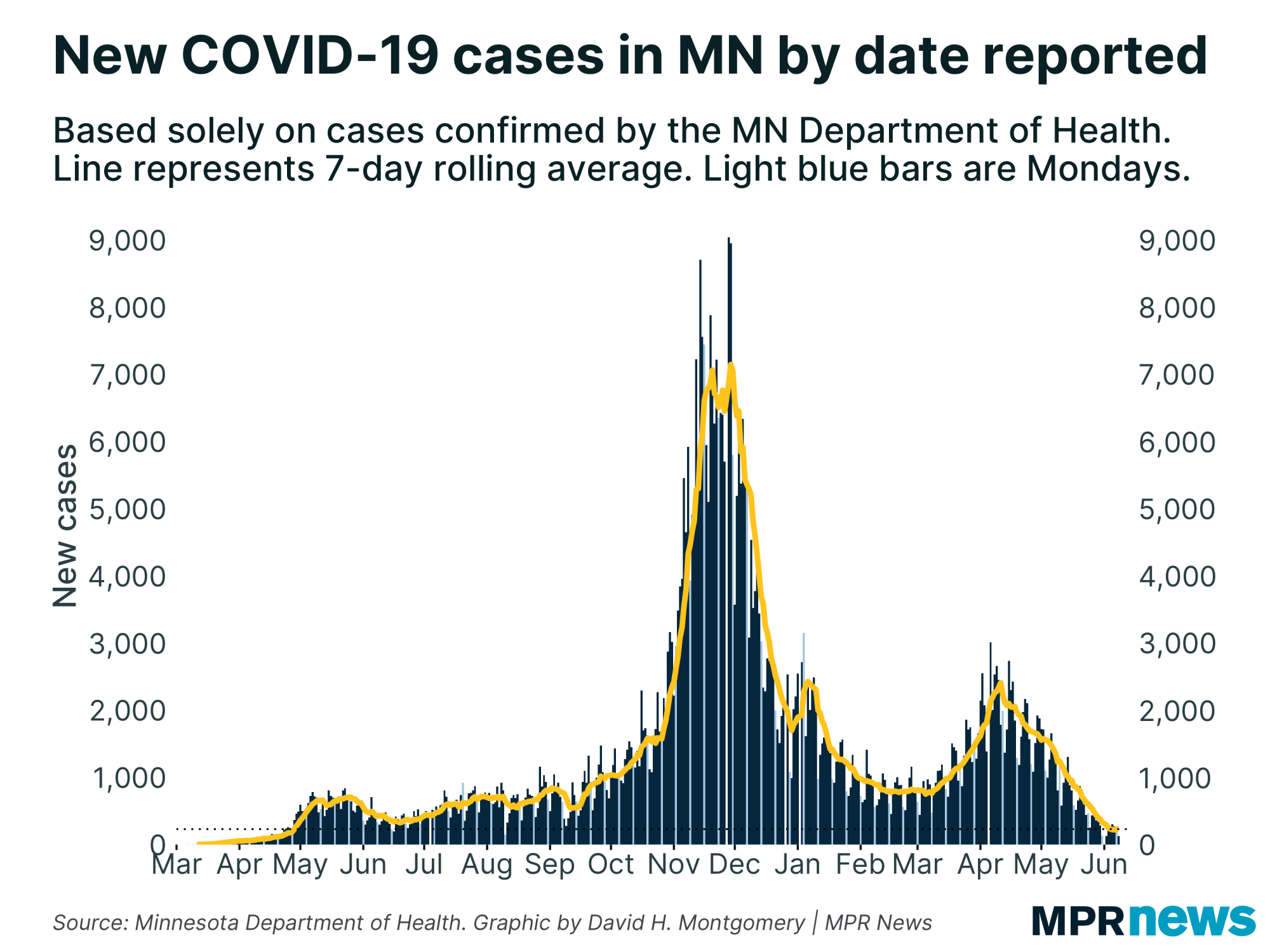 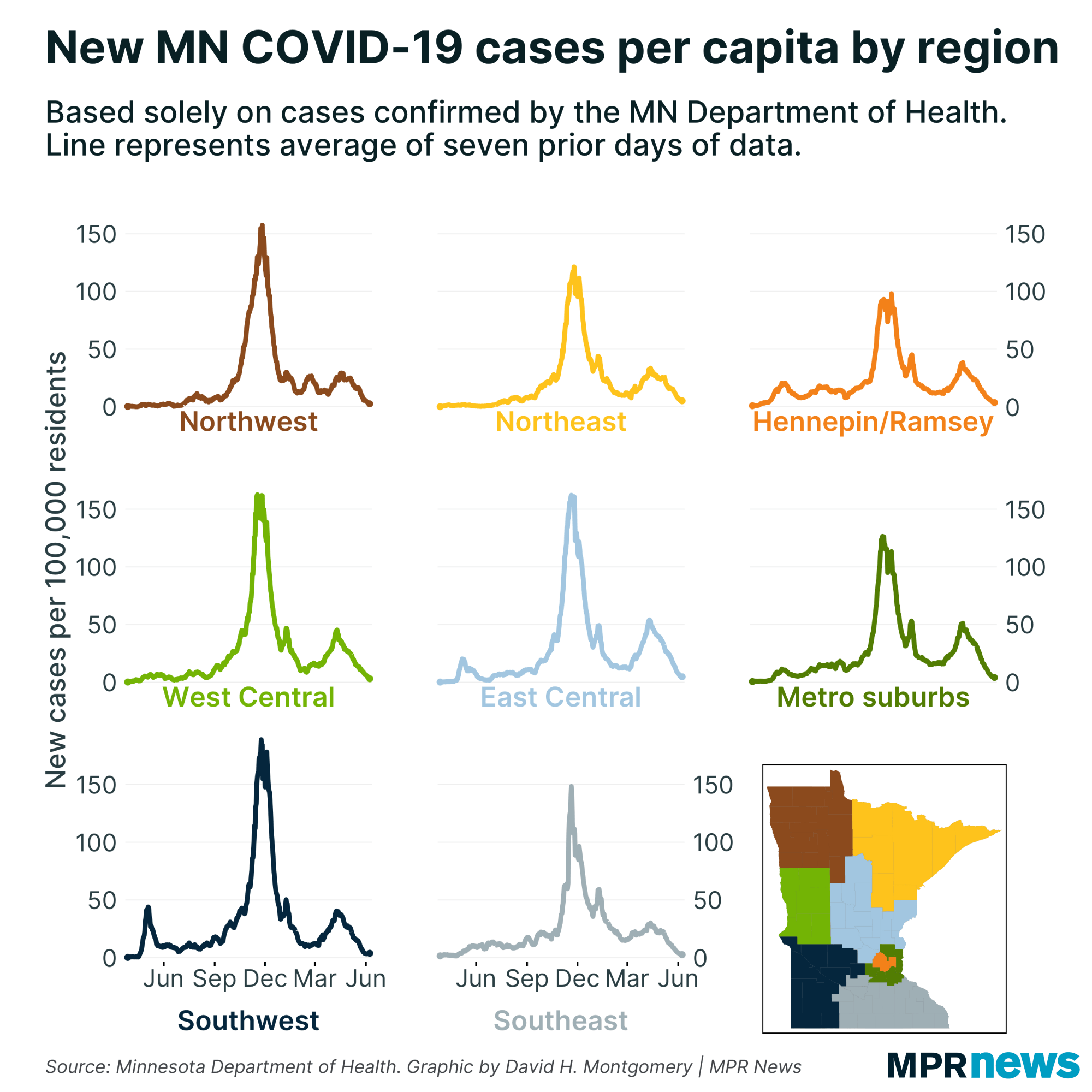 The vaccination pace has been mostly in free-fall since peaking in April. 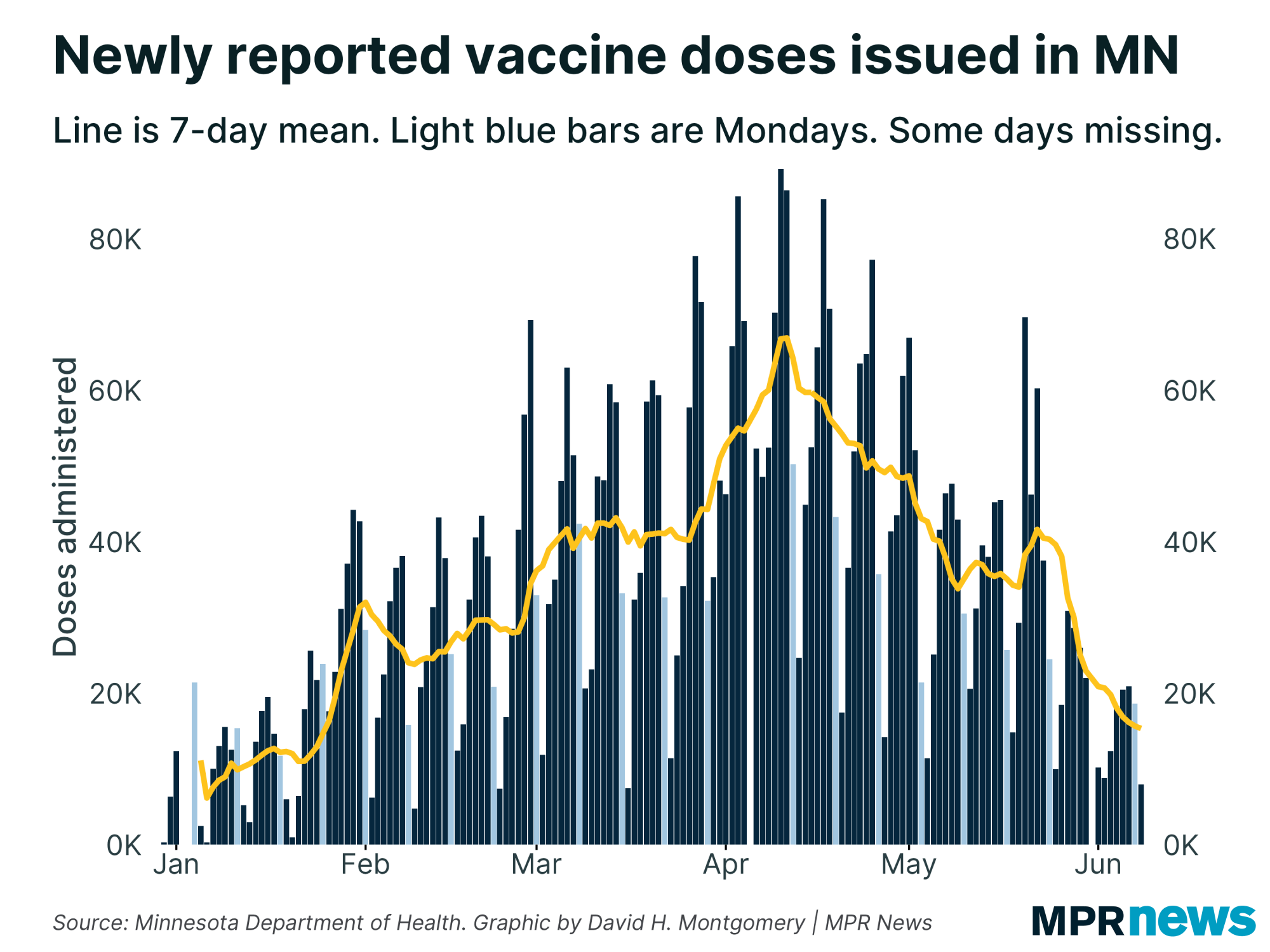 The good news is that nearly 2.9 million residents 16 and older now have at least one vaccine dose. More than 2.6 million have completed their vaccinations.

That works out to about 60.1 percent of the 16-and-older population completely vaccinated and 65.3 percent with at least one shot.

But with the vaccination rate collapsing, it’s looking now like it will be the end of July before the state will reach 70 percent of adults with at least one shot. 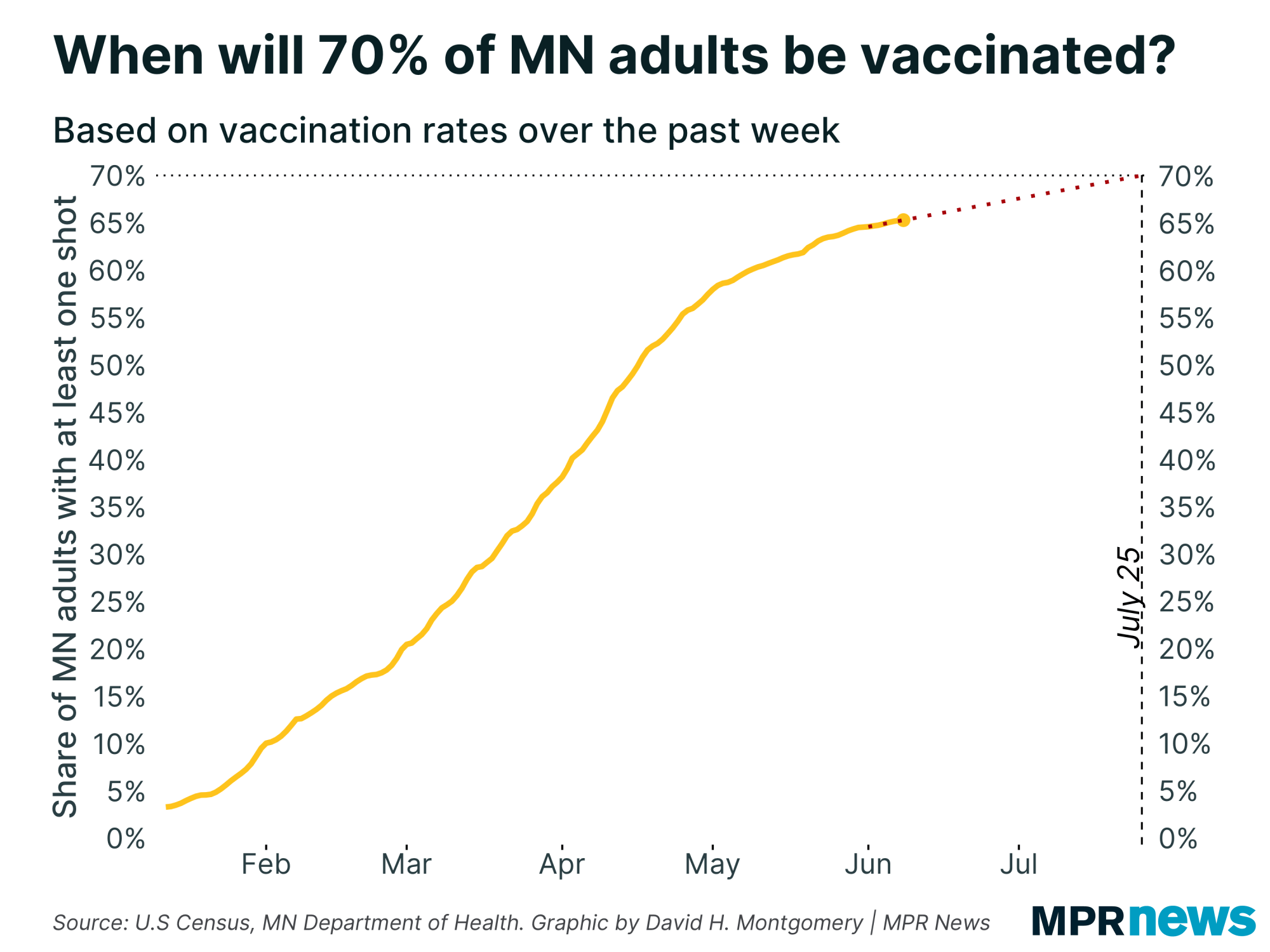 Officials noted recently that the 70-percent goal has been reached already in the Twin Cities metropolitan area but that outside the region, it’s only about 57 percent.

Minnesota’s seen notable growth in the number of children ages 12 to 15 getting vaccinated since mid-May when federal authorities approved the Pfizer vaccine for use at those ages.

Health Department data shows more than 87,000 12-to-15-year-olds with at least one dose. That’s about 30 percent of that population already with at least one shot. The pace, though, has fallen following an early surge.

To see the original reports and read more COVID-19 reporting, follow this link to the MPR News website. https://www.mprnews.org/story/2021/06/09/latest-on-covid19-in-mn