Latest on COVID-19 in MN: Hope and worry as vaccinations, new cases climb Vaccinations are trending the right way, disease metrics are not. That’s where Minnesota sits now in the COVID-19 pandemic.

The state’s vaccination pace remains firmly on the upswing, but new and active COVID-19 cases are pushing higher, and intensive care needs are at their highest level in more than two months.

Even as they loosened rules to make it a bit easier for assisted living residents to get out for Easter, play cards and eat dinner together, officials remain anxious about rising caseloads tied to the U.K. COVID-19 variant and to youth sports.

The Health Department on Thursday reported about 46,000 new vaccinations, pushing the seven-day trend to more than 52,000 shots daily — the highest since vaccinations began in late December. 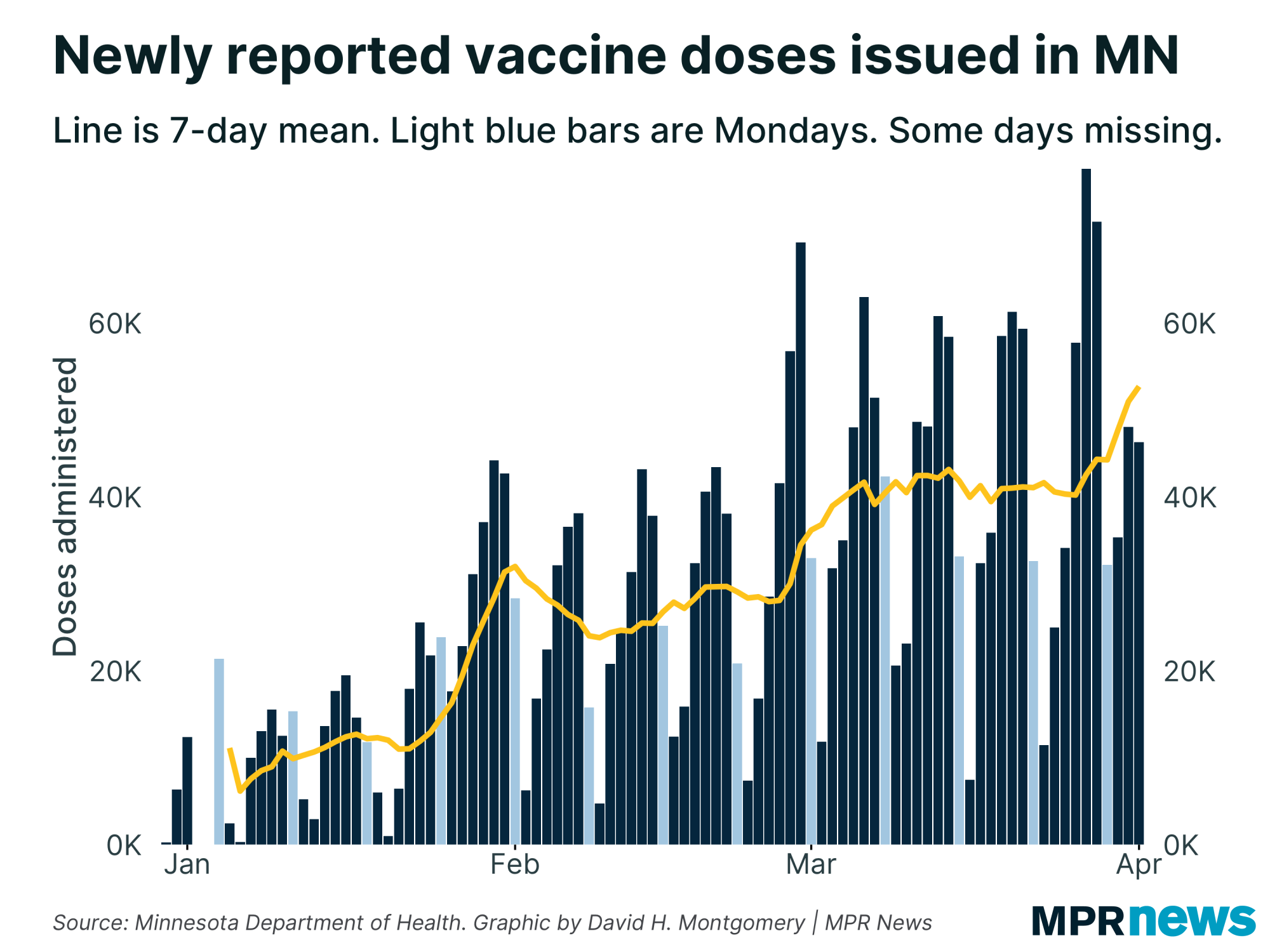 More than 1 million Minnesotans are fully inoculated while nearly 1.7 million have received at least one dose, including nearly 82 percent of residents age 65 and older. 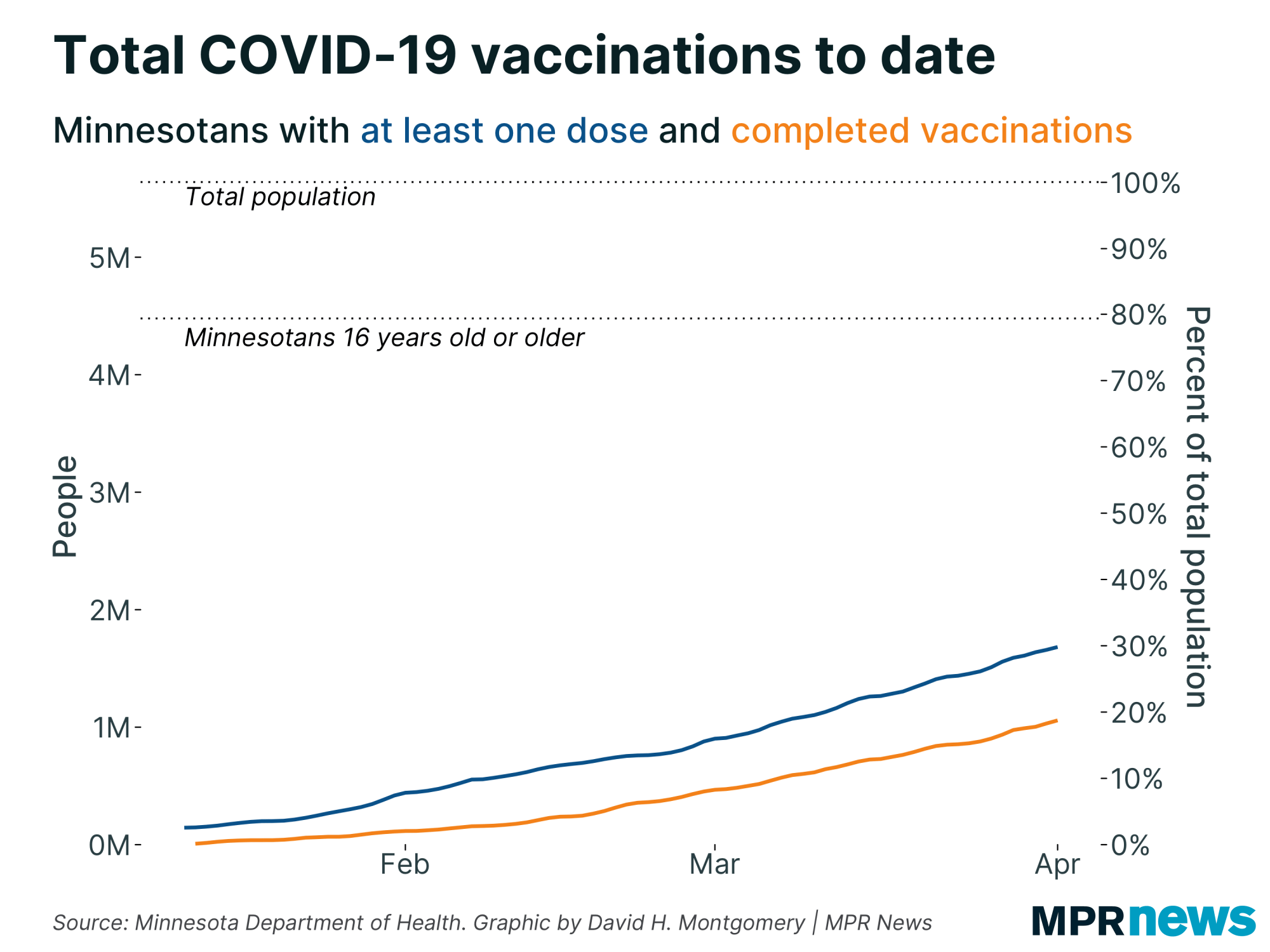 But as the trend lines move the right way on vaccinations, they’re headed the wrong way around the disease. Known, active cases, for instance, have pushed back above 14,000 — the highest count since mid-January.

Thursday’s data also shows the state’s positive test rate trending for a third day above 5 percent — a warning sign about a possible surge.

“We are all tired of this virus and the restrictions it’s brought on, but we need to act now,” Dr. Ruth Lynfield, the state’s epidemiologist, told reporters as she implored Minnesotans to keep social distancing and wearing masks in indoor public gathering spaces to check the spread of the disease.

“I do feel like we’re at a critical juncture,” she added.

The good news is that many of the state’s highest-risk residents, including seniors, have received at least one dose already and Minnesota expects to see its federal vaccine supply shipments jump starting in April.

Officials have described the current situation, though, as race against time to vaccinate as many Minnesotans as possible before the COVID-19 variants can get a stronger foothold in the state.

They’ve confirmed nearly 1,000 cases in the state of the highly contagious U.K. strain in recent weeks and believe it’s responsible for the majority of new cases reported. 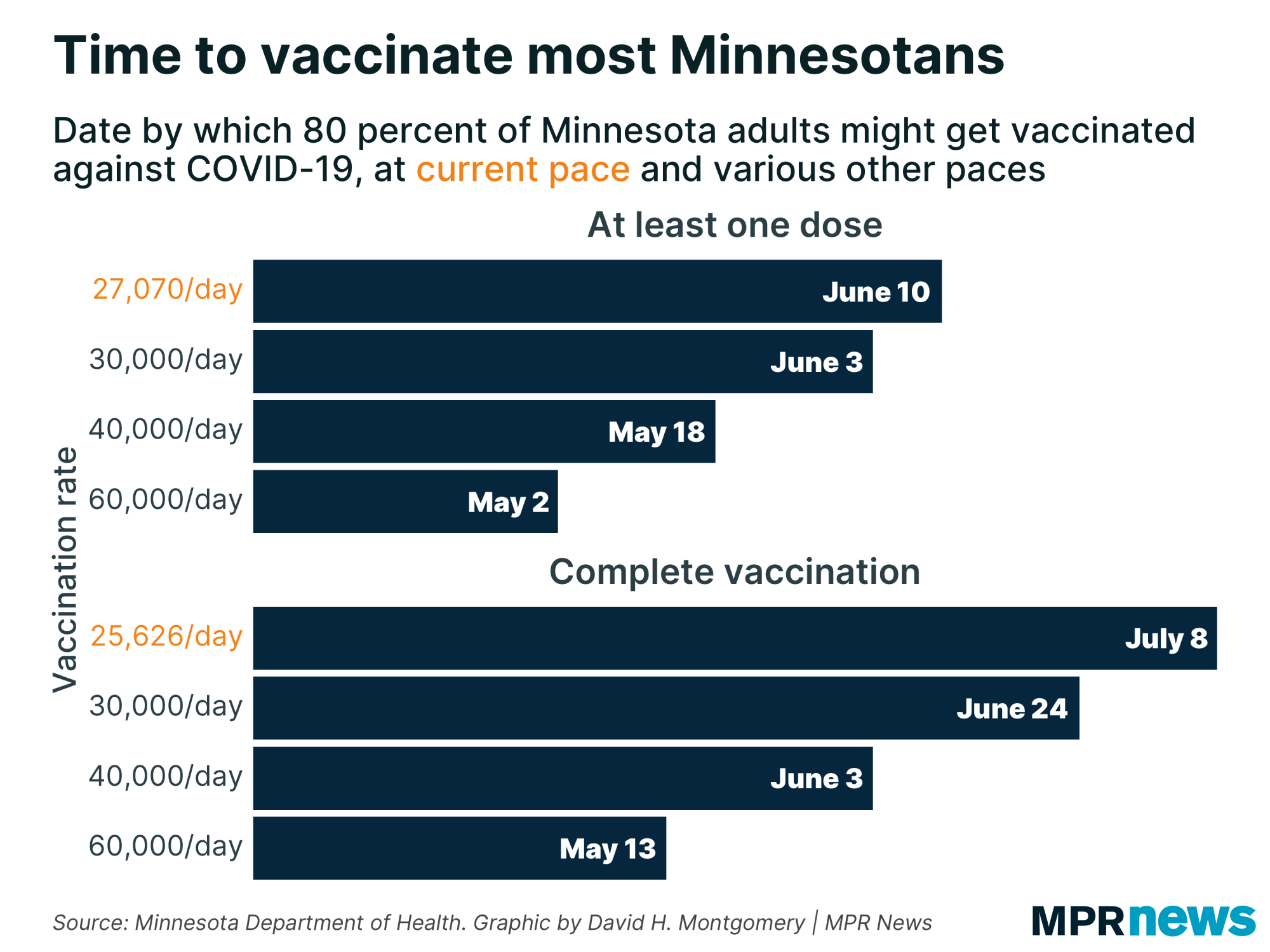 The number of known, active cases has been trending upward over the past few weeks, with 14,456 active cases as of Thursday’s report — marking 14 consecutive days with active counts above 10,000, a stretch not seen since January. 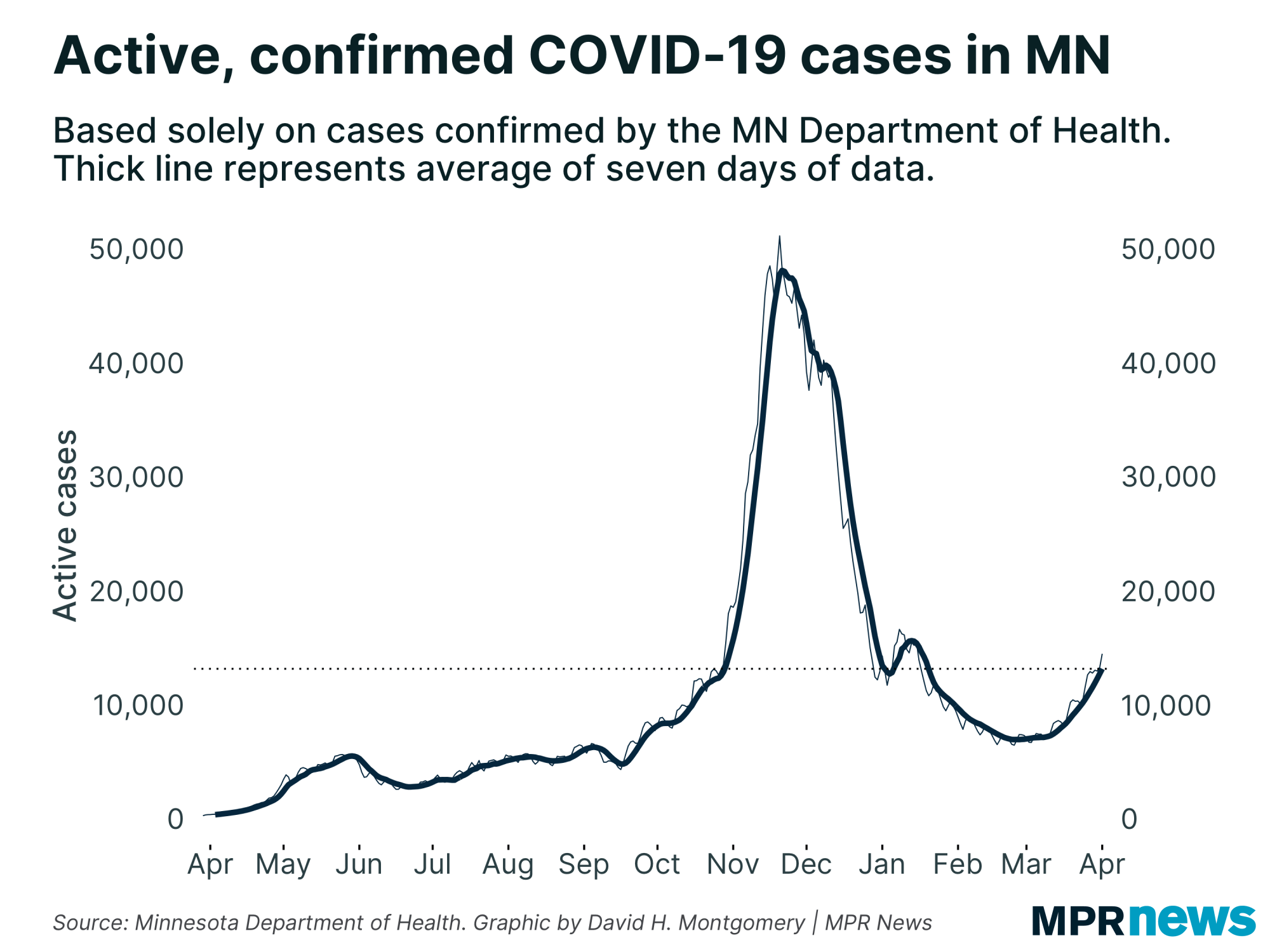 While still low compared to late November and early December, the rising trend is notable given the worries over the rise of the U.K. COVID-19 strain, which state health officials suspect is driving the current upswing. 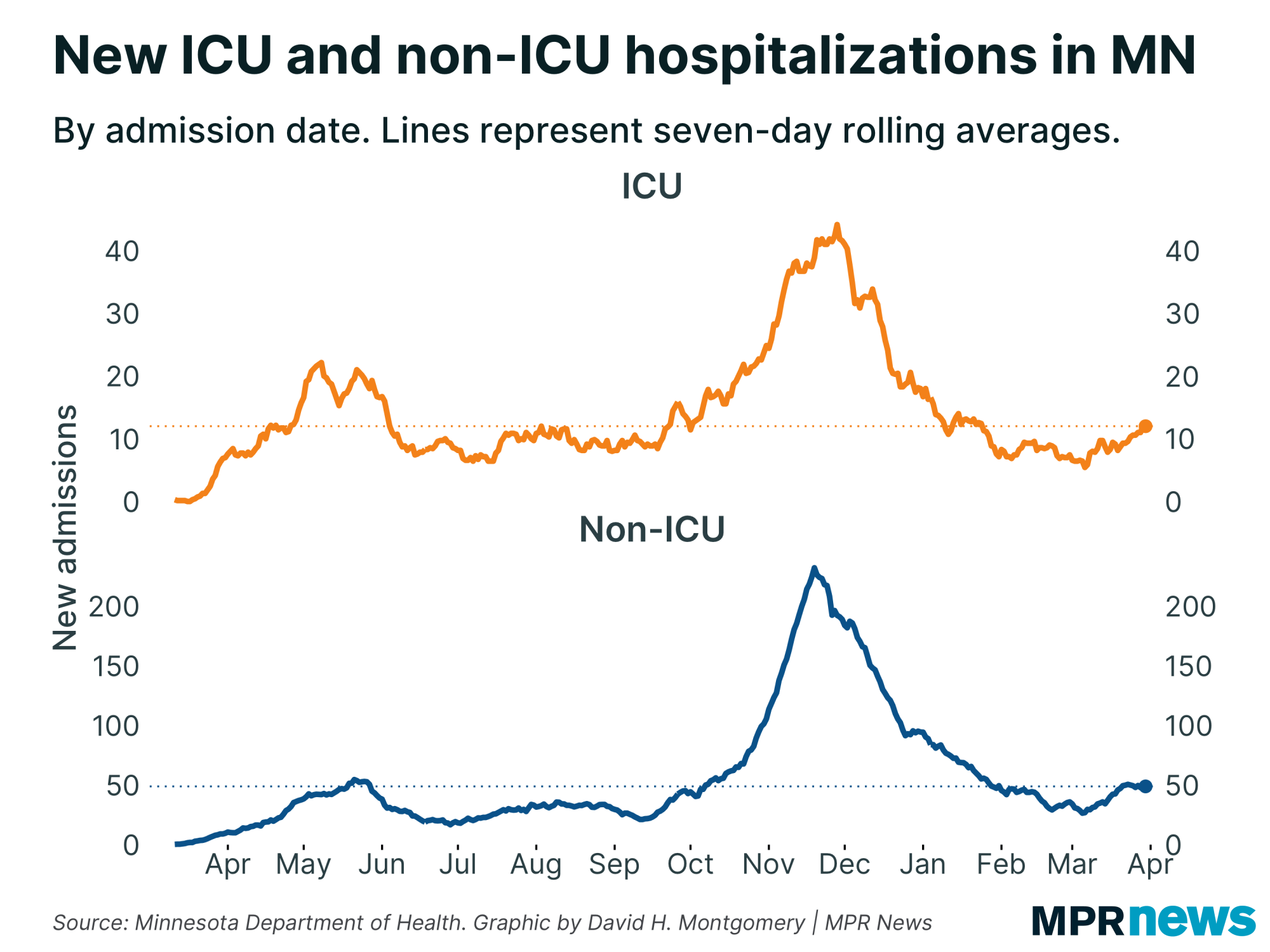 Hospitalization rates for people with COVID-19 are also rising across the state. Dr. Dawn Droder, the chair of hospital services at Essentia Health in Duluth, Minn., says their number of people hospitalized has doubled in the past week or so.

"We are not anywhere near where we peaked in November, but we're cautiously watching these numbers because they're increasing for sure,” Droder said.

She said that the majority of their COVID-19 patients are between the ages of 37 and 65, and that it's likely many younger people with COVID-19 are spreading it to older adults.

Twelve deaths reported on Thursday raised Minnesota’s overall pandemic death toll to 6,860. Among those who’ve died, about 62 percent had been living in long-term care or assisted living facilities; most had underlying health problems. 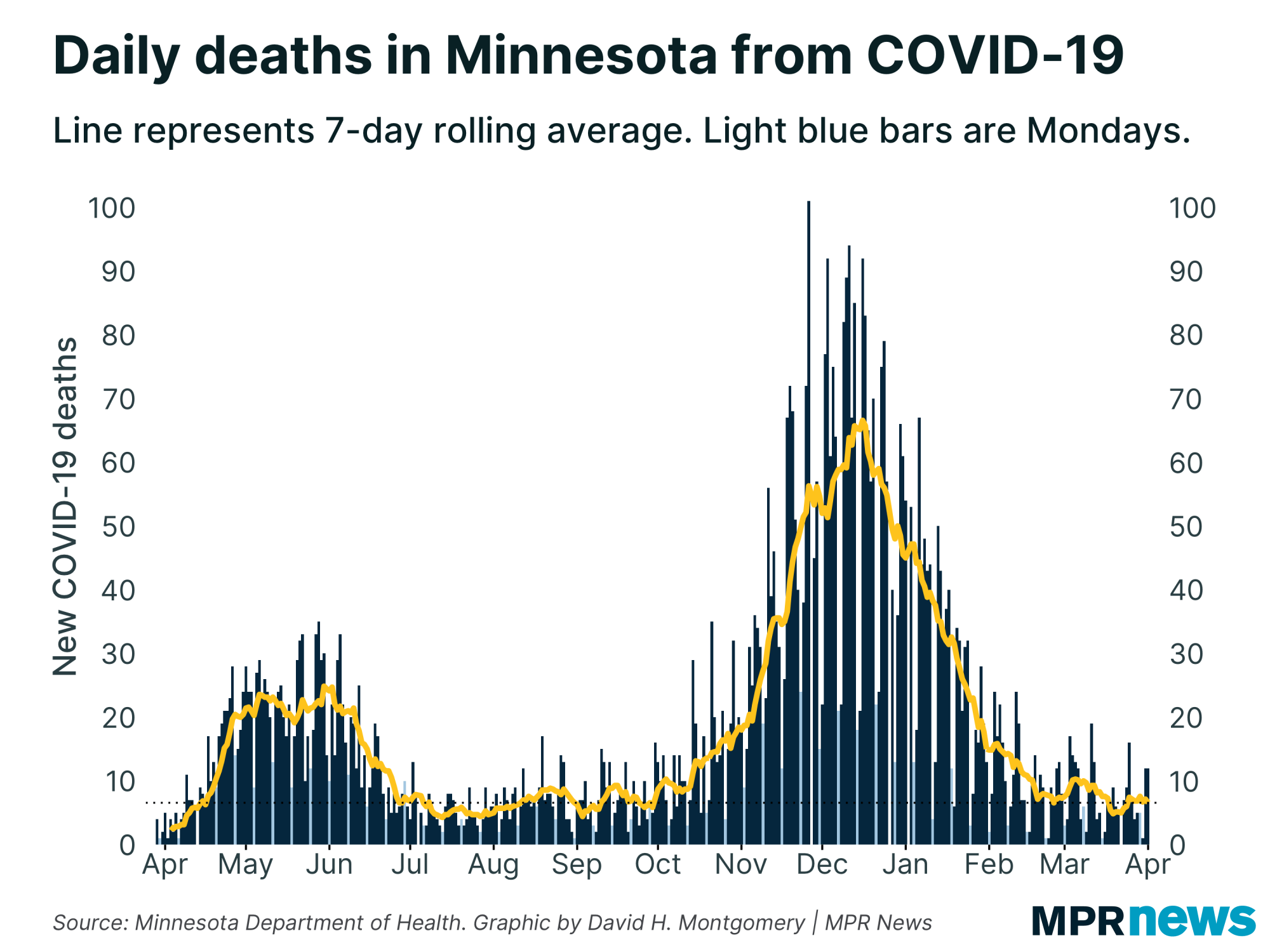 The state has recorded 521,667 total confirmed or probable cases so far in the pandemic, including 2,140 posted Thursday. About 96 percent of Minnesotans known to be infected with COVID-19 in the pandemic have recovered to the point where they no longer need to be isolated. 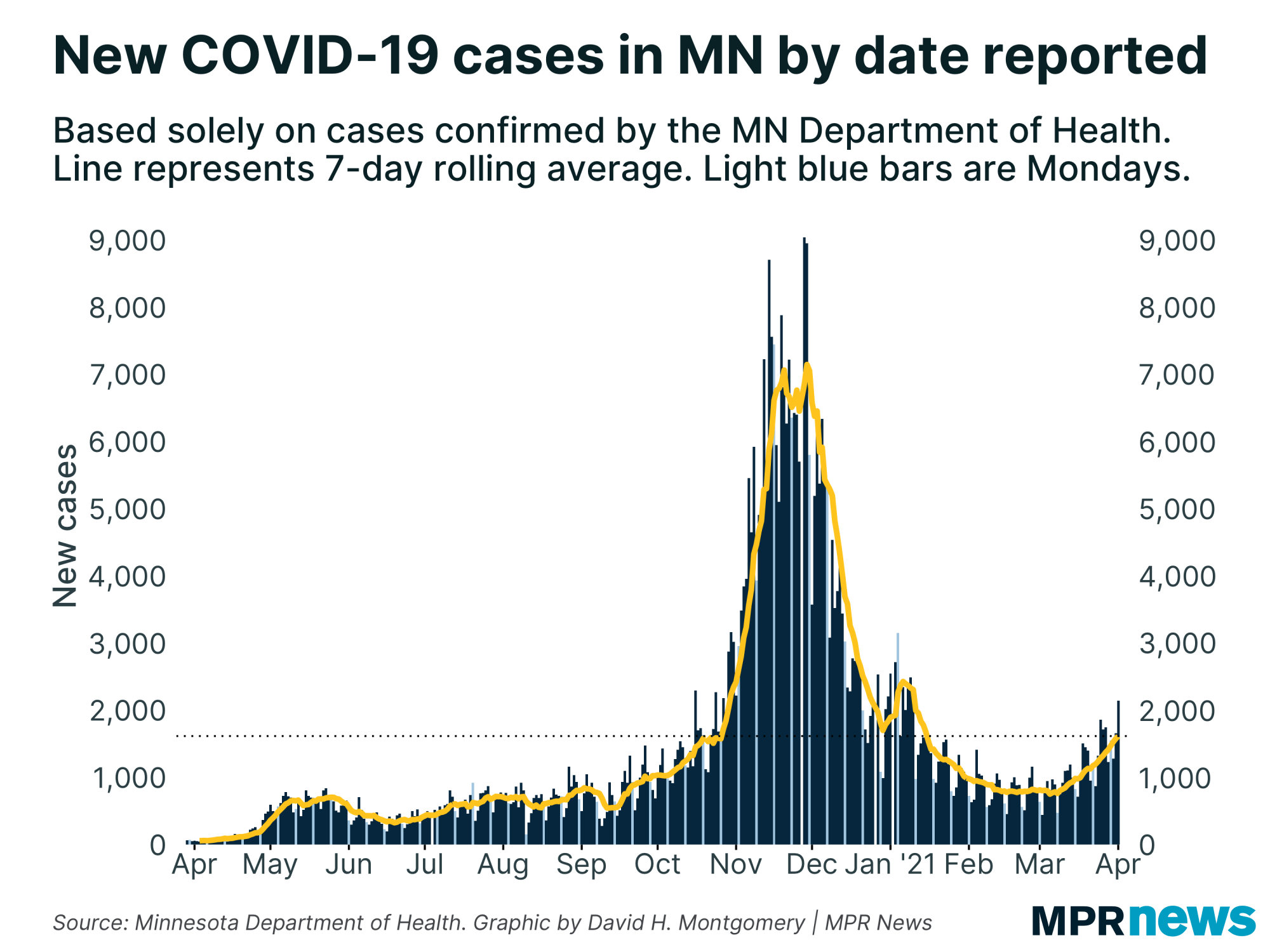 Regionally, all parts of Minnesota are in better shape than they were in late November and early December.

The latest numbers, however, show cases are up sharply in every age group except the oldest, and in almost every region of the state. 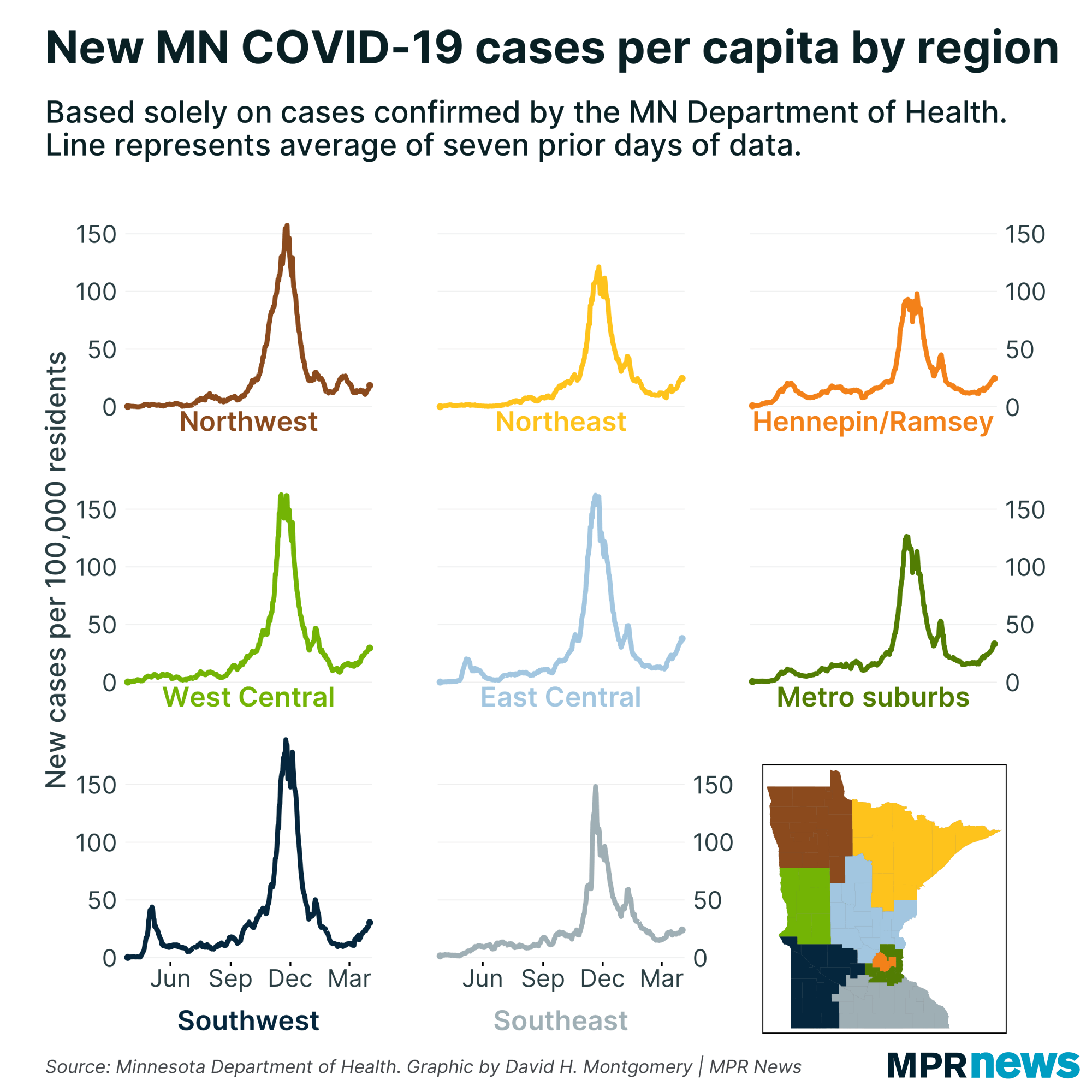 Public health leaders continue to keep watch on clusters in the southwest Twin Cities metro area — specifically Carver and Scott counties — as well as the Mankato area and the eastern Iron Range, centered around the town of Aurora. There’s also been a recent outbreak in Ely, northeast of Aurora.

People in their 20s still make up the age bracket with the state’s largest number of confirmed cases — more than 97,000 since the pandemic began, including more than 51,000 among those ages 20 to 24.

The number of high school-age youth confirmed with the disease has also grown, with more than 41,000 total cases among those ages 15 to 19 since the pandemic began.

Although young people are less likely to feel the worst effects of the disease and end up hospitalized, experts worry they will spread it unknowingly to older relatives and members of other vulnerable populations. Those with the coronavirus can spread it when they don’t have symptoms.

Caseloads among people of color 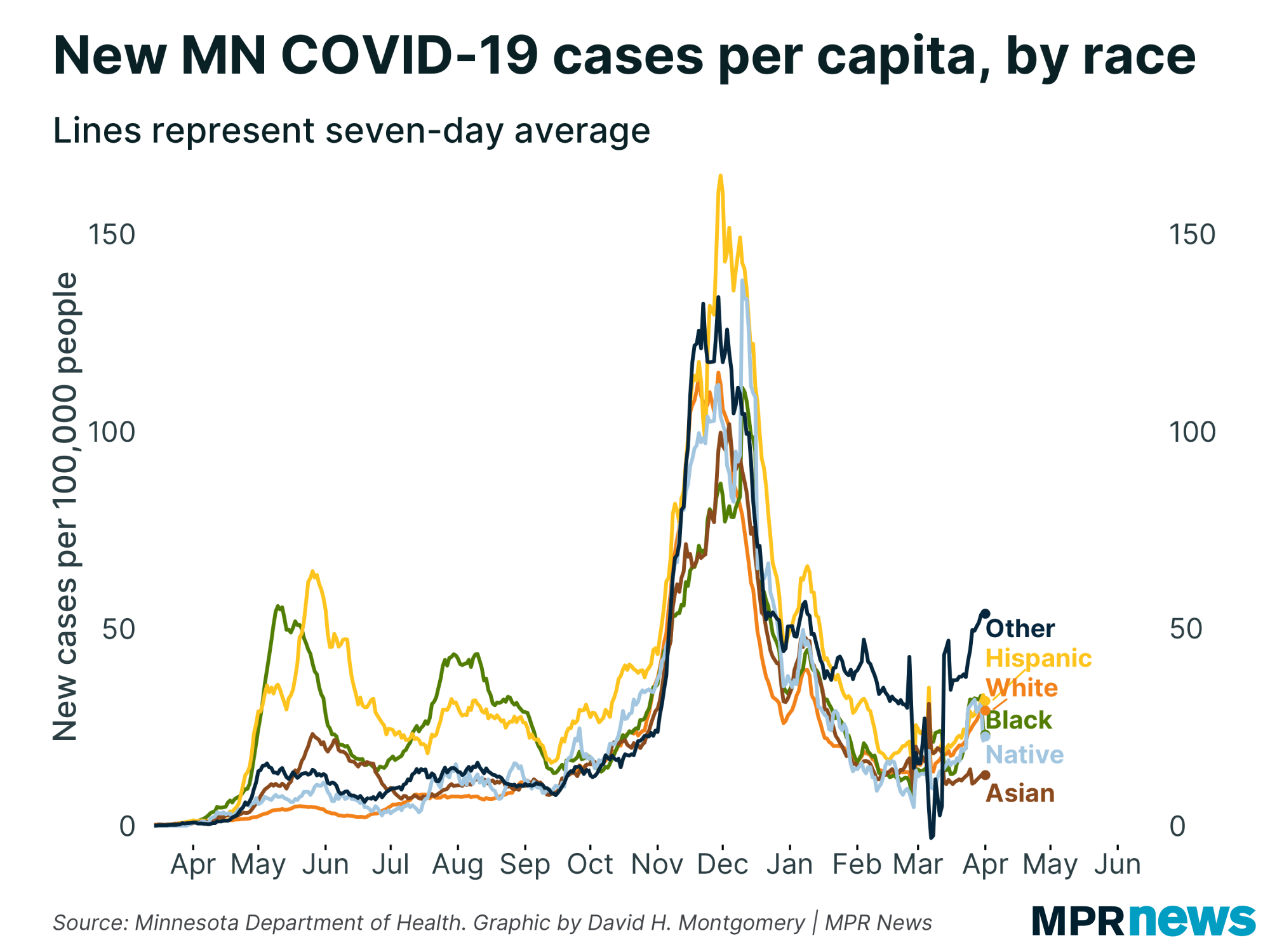 Officials have acknowledged that distrust by communities of color has been a problem during the pandemic. They’ve offered up some data on vaccinations broken down by race and ethnicitythat they’re updating regularly.

State officials on Thursday had good news for residents of assisted living and nursing homes. Effective immediately, they can leave their facility for less than 24 hours without having to quarantine when they return.

It means that in most circumstances, residents can go out with family and friends without needing to quarantine upon return if they are back within 24 hours and adhere to COVID-19 protocols, Kris Ehresmann, the state’s infectious disease director said.

The policy aligns with new federal guidance and because it’s immediate it means residents and families can be together on Easter, Passover, Ramadan or other spring celebrations outside the facility

Ehresmann on Thursday also said that because vaccination rates are high and disease rates are down in assisted living facilities, the state is loosening rules to allow for more opening dining and socializing.

Residents who are fully vaccinated can dine with others and participate in activities like card playing while being closer than 6 feet.

The change, she added, does not include Minnesota skilled nursing facilities or nursing homes that serve higher-risk populations.

Baseball is back, so grab your hot dog and a beer. Just keep a safe distance: And as a new baseball season kicks off, all those ballpark staples will still be available. How that food gets to you, however, will be a different matter. With the Major League Baseball season starting off with much reduced capacity at most ballparks and with social distancing rules, teams have had to think hard about how to interact with their fans.

To see the original stories and read related COVID-19 reporting, follow this link to the MPR News website.  https://www.mprnews.org/story/2021/04/02/latest-on-covid19-in-mn
Announcements