‘Sick for a season’: A glimpse at the road to recovery after a difficult battle with COVID Gabe Pastores waves to nurses outside the Hastings Health and Rehabilitation Center on March 13. Pastores spent most of the winter in the Mayo Clinic's COVID-19 intensive care unit before being discharged for rehabilitation.  Photo: Evan Frost | MPR News

When Gabe Pastores walked out of Hastings Senior Health and Living rehabilitation center in mid-March, he got a standing ovation from an array of nurses, occupational and physical therapists who work there.

“Good luck to you! Congratulations!” they cheered, as Pastores made his way out of the rehab facility’s front doors.

Pastores had been there for 5 1/2 weeks since his discharge from Mayo Clinic, where he’d been treated for COVID-19 since November.

When he arrived at rehab on a frigid day in early February, he couldn't stand on his own for more than 30 seconds without needing a break.

But on that warm day in March, he was walking out of the facility on his own, getting in his car and heading back to his home in Cannon Falls.

But like so many others who have experienced an exceptionally difficult battle with COVID-19, Pastores’ story won’t end with his discharge. 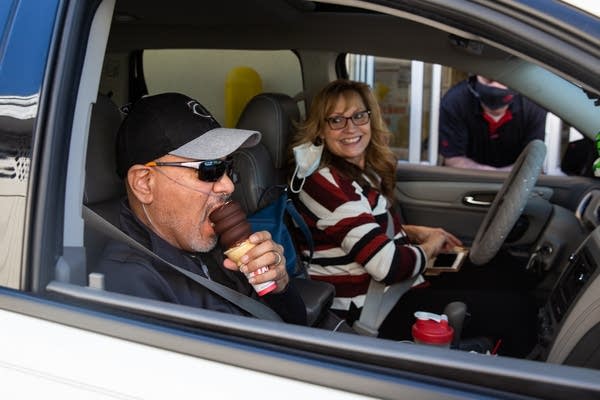 Cindi Pastores smiles at her husband Gabe as he eats his first Dairy Queen ice cream cone since being released from rehab facility and hospital care after a monthslong battle with COVID-19. "I am just so relieved that he's here," Cindi Pastores said at their home, "It's just so surreal."  Photo: Evan Frost | MPR News

He has hard work ahead of him — to regain his physical strength, which deteriorated while was hospitalized. It's a road made more challenging by the lung damage brought on by the virus. Five months from his COVID-19 diagnosis, Pastores still struggles to catch his breath. And he faces an array of physical hurdles that, a little more than a year into the pandemic, doctors are just beginning to understand.

A few days after his homecoming, Pastores sat in a reclining chair surrounded by exercise bands and colorful foam blocks he stretches and squeezes throughout the day to rebuild strength in his hands and arms. 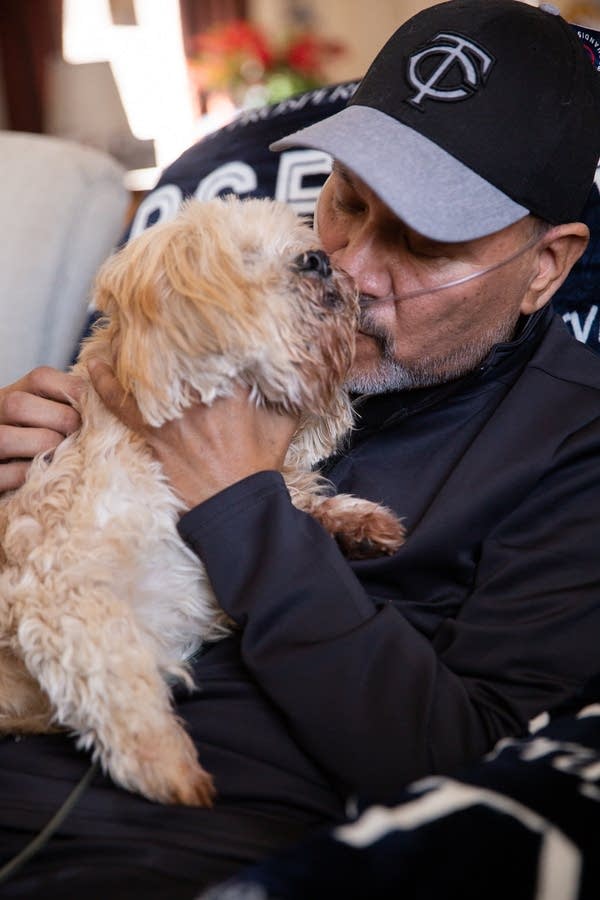 “I've worked really hard to get to this point. Like, really hard,” he said.

Since returning home, Pastores has focused on simply walking from room to room, and standing for gradually longer periods of time — tiny activities most people are hardly aware of doing, but that can quickly exhaust recovering COVID-19 patients like him.

His wife, Cindi, said right now it's all about baby steps — literally.

"Walking back and forth and doing exercises in the house is fine,” she said. “But he still can't really do anything yet. He hasn't been able to fry eggs in his new pans with his new utensils that I got him.”

In many respects, Gabe Pastores' experience with COVID-19 defied the odds.

At 56, he's younger than most patients with the most severe cases of the disease, and in relatively good health. He had an active job — laying flooring — and exercised regularly. When he got sick, he had been working at a local grocery store, loading and lifting boxes. 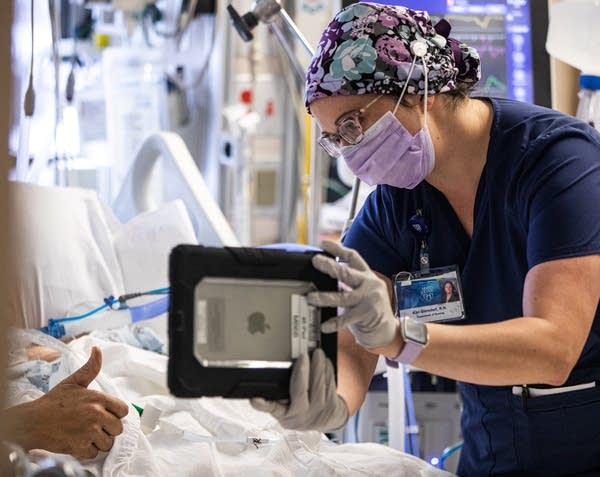 Nurse Kari Giersdorf holds an iPad for Gabe Pastores to talk to his family on New Year's Eve, while he was a COVID-19 patient in Mayo Clinic's medical ICU at St. Mary's Hospital in Rochester.  Photo: Evan Frost | MPR News 2020

Most people who have been hospitalized with COVID-19, especially in the intensive care unit, are older and have an array of health conditions that put them at higher risk of getting a severe case of the virus and dying from it.

And despite the fact that he was a young and otherwise healthy patient, it wasn't always certain Gabe Pastores would make it. For weeks, he was deeply sedated, his doctors applying every tool in their arsenal to keep him alive — including a ventilator and ECMO, a machine that oxygenates blood — while his body did the work of healing itself.

And then: weeks at the rehab facility.

Gabe Pastores said his family — and the realization that he may not have made it out of Mayo alive — has been driving him to stick with his physical therapy. It’s kept his spirits up, even when things get hard.

Down the hallway from Pastores’ living room is his 96-year-old father’s room. Jack lives with Gabe and Cindi, and contracted COVID-19 around the time his son did. He came home after a short hospitalization.

“He’s Superman,” Gabe Pastores said. “Just to see him fight and plug along. That’s another inspiration for me.” 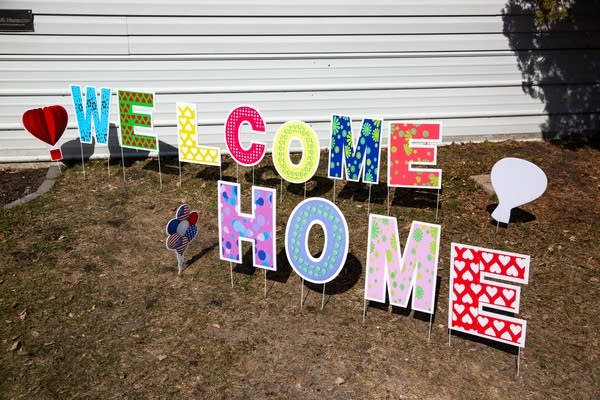 Signs posted in the yard welcome Gabe Pastores home to Cannon Falls for the first time after a monthslong battle with COVID-19 on March 13. Photo: Evan Frost | MPR News

Motivation will be Gabe Pastores’ secret weapon now that he's at home, said Steve Hett, who oversaw his occupational therapy regimen in rehab.

Hett saw his determination early on.

“The deal was for him to have that motivation to put up with us every day, having him do all these crazy things. And then he would say 'All right, can't wait to see you tomorrow.' It was just amazing,” Hett said.

Hett says that, in a few months, Gabe Pastores will certainly be able to do a lot more, and with fewer breaks. He's getting assistance at home from a team of physical and occupational therapists, and an in-home nurse who takes his vitals, checks his medications and listens to his lungs.

That's all on top of the care he'll continue to get through his doctors at Mayo.

But in the long run, Hett said, Gabe Pastores needs to relearn what his body is willing to tolerate. That’s especially important, given the lung damage he’s sustained from COVID-19 — which foreshadows the possibility of lifelong breathing challenges.

"He's going to have to make adjustments to his routine, what he's able to do at home. It's hard to say if work is going to be a possibility for him,” Hett said, “That's certainly up in the air right now for him."

‘Sick for a season’

At home, Gabe Pastores said he's focusing on getting back to being able to do small things by the time the weather gets warmer.

"Cutting my own grass. Trimming the trees. Working in my yard again,” he said.

His illness has, in some ways, been a gift, he said — putting into sharp focus things most dear to him, like his wife and family.

But also, it's a reminder of the privilege of being alive. 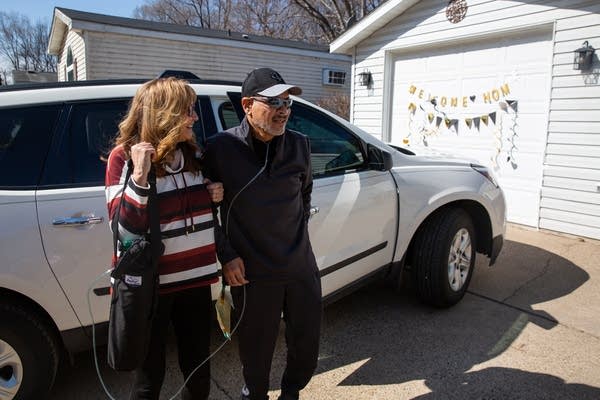 Cindi Pastores helps her husband Gabe from the car into their home on March 13 — for the first time since he was admitted to the hospital with COVID-19 in the fall of 2020. Photo: Evan Frost | MPR News

He looked out the window and pointed to the melting snow, which had appeared just the day before. It was the type of spring storm that inevitably prompts Minnesotans to question why they live here.

But for Gabe Pastores, who missed nearly all of the winter, it was an unexpected delight.

To see the original article and read related reporting, follow this link to the MPR News website.  https://www.mprnews.org/story/2021/03/29/sick-for-a-season-a-glimpse-at-the-road-to-recovery-after-a...