Latest on COVID-19 in MN: Poised for a vaccination upswing Afton Bonin, director of nursing at the Sawtooth Mountain Clinic, fills a syringe with the Moderna vaccine in preparation for people coming in on Thursday at the Cook County Community Center in Grand Marais, Minn.   Photo: Derek Montgomery for MPR News

Vaccination traction is here. Vaccination acceleration may be on the way.

Minnesota Health Department data shows the state’s vaccination trend line is headed in the right direction. The seven-day rolling average is running at nearly 37,000 a day, the highest it’s been since vaccinations began in late December.

State officials have said for weeks that they’d be ready to ramp up vaccinations when they got more supply. With the feds now saying there will be enough vaccine to inoculate every adult American by the end of May — two months earlier than expected — the table seems set. 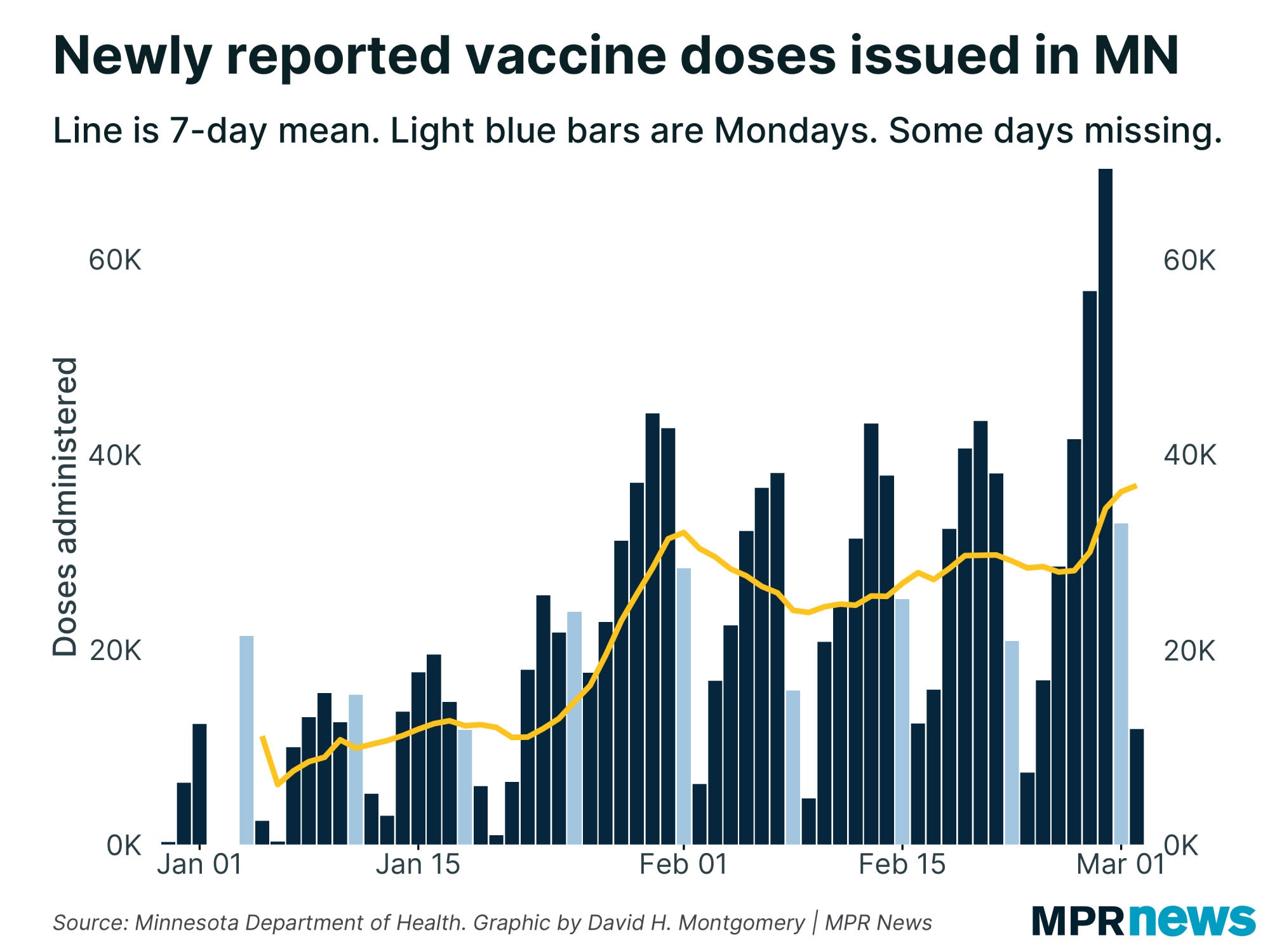 “We view Johnson & Johnson as a game changer that will help us to quickly provide immunity to even more Minnesotans,” Kris Ehresmann, the state’s infectious disease director, told reporters Tuesday.

Gov. Tim Walz has vowed that every Minnesotan should be able to get a COVID-19 vaccine shot by the summer. 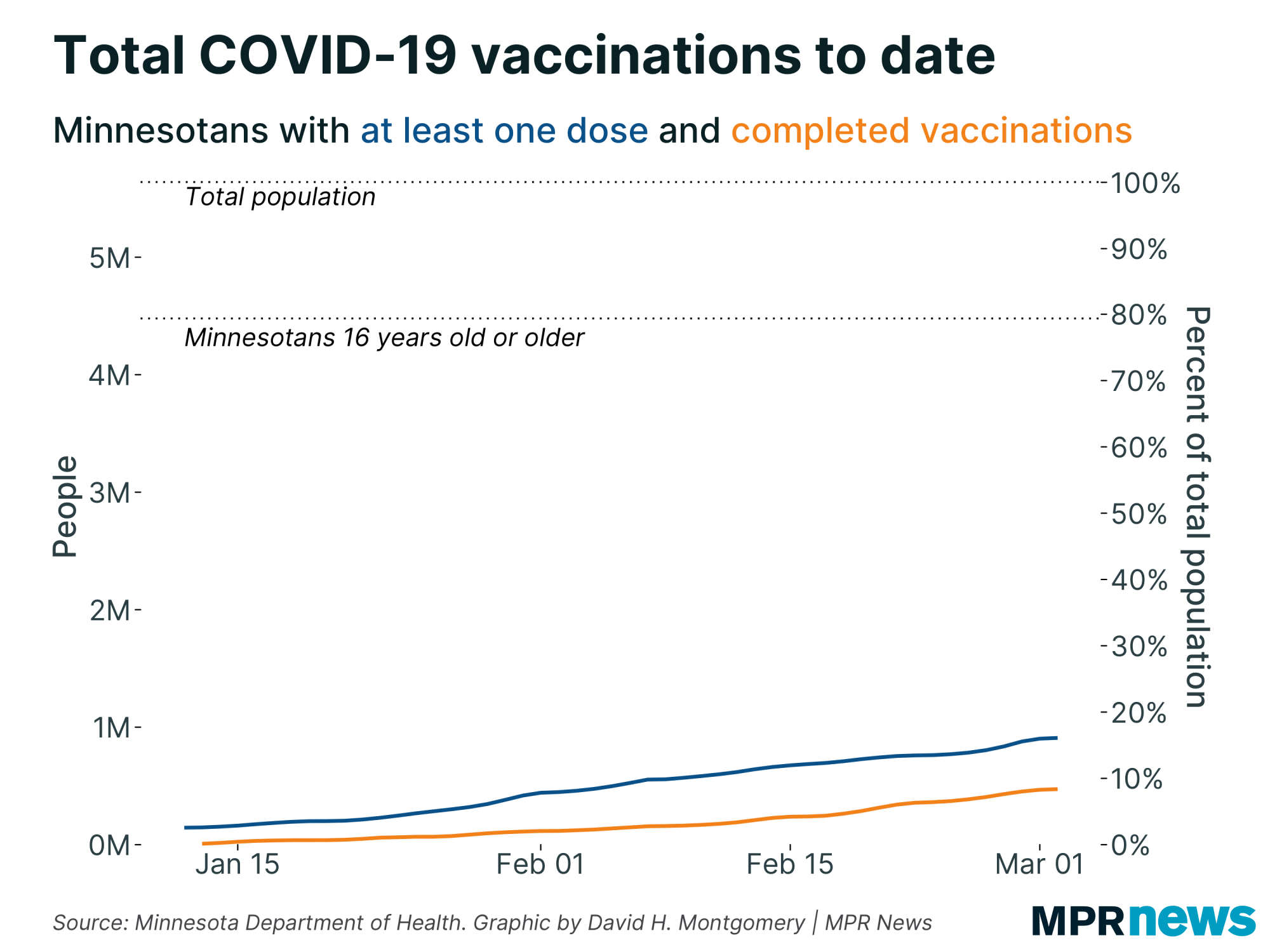 About 16.3 percent of Minnesotans age 16 and older — more than 900,000 people — had received at least one dose as of Tuesday’s Health Department update, with about 8.5 percent completely vaccinated.

Fifty-three percent of Minnesotans 65 and older have received at least one shot currently, according to Health Department calculations. That’s important since Walz has said the state will expand vaccination eligibility when 70 percent of that population gets a first dose.

Long-term care facilities were once the epicenter of the disease, but cases have plummeted to levels not seen since early in the pandemic, said Lindsey Krueger, director of the state’s office of health facility complaints.

Ninety-six percent of facilities are allowing visitors now, she told reporters Tuesday. Shortages of health care workers at the facilities had also been a major concern early on, but the state’s emergency operations center currently has no requests for help on staffing, she added.

While the pace of vaccinations is picking up, Minnesota’s COVID-19 numbers show the state holding fairly steady in a good way.

Hospitalization rates remain encouraging at levels last seen before the late-fall surge in cases. The Health Department on Tuesday reported 243 people in Minnesota hospitals with COVID-19, with 57 needing intensive care, staying down at relatively low levels. 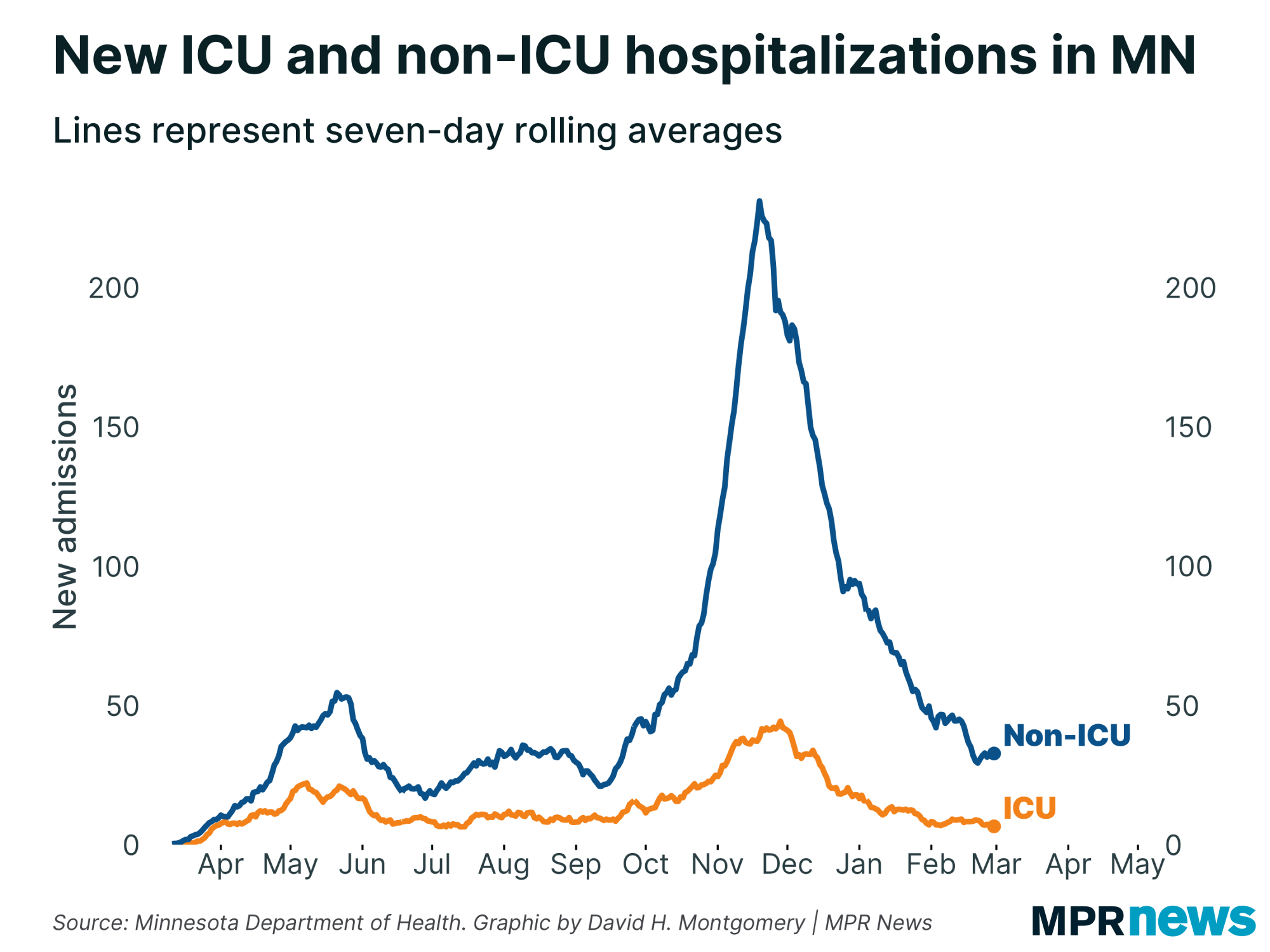 Known, active cases came in at just under 7,000, continuing a trend that stayed fairly stable through February and remains down dramatically from late November and early December, when active cases hovered around 50,000. 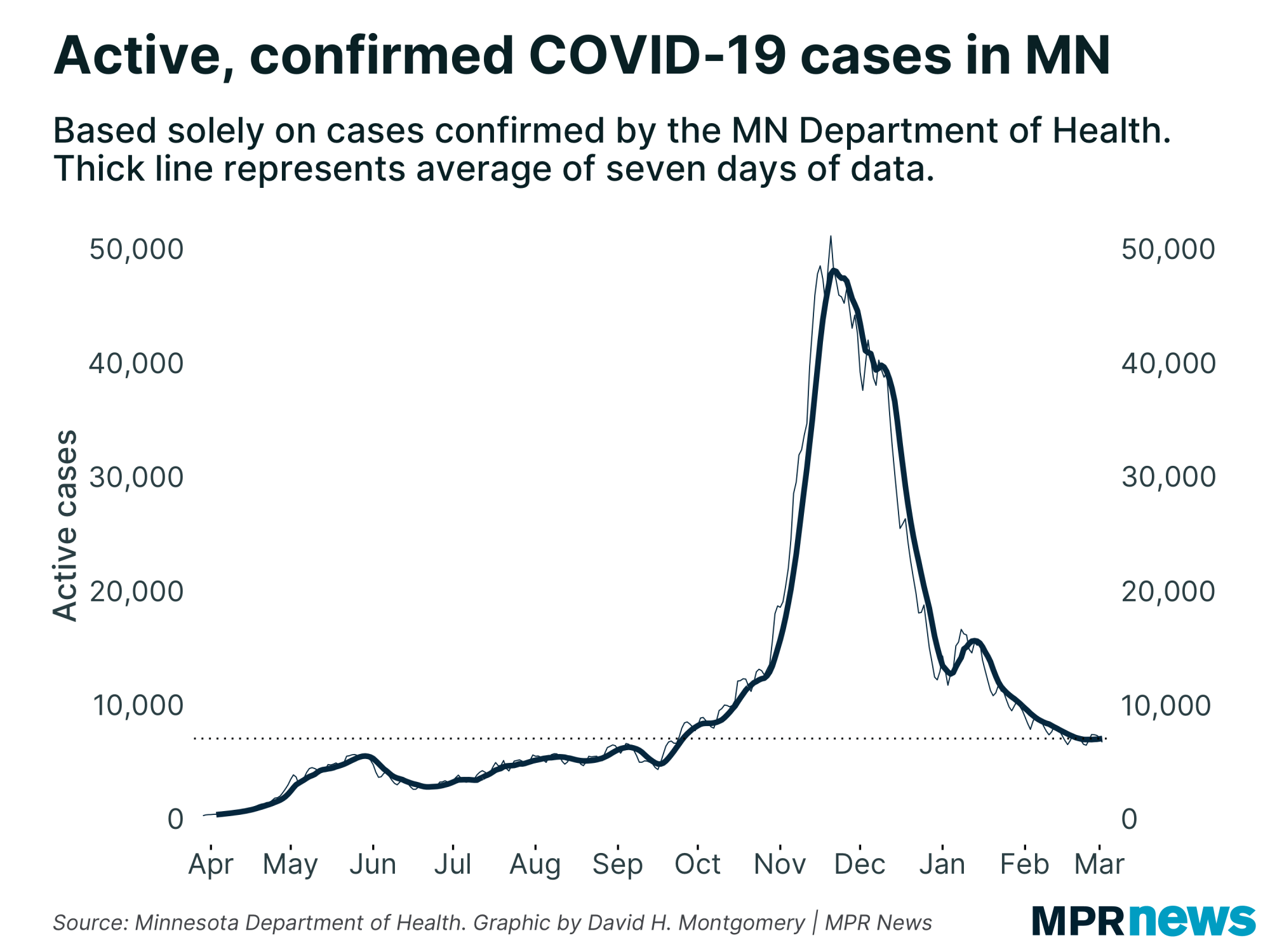 Four newly reported deaths raised Minnesota’s toll to 6,490. Among those who’ve died, about 63 percent had been living in long-term care or assisted living facilities; most had underlying health problems. 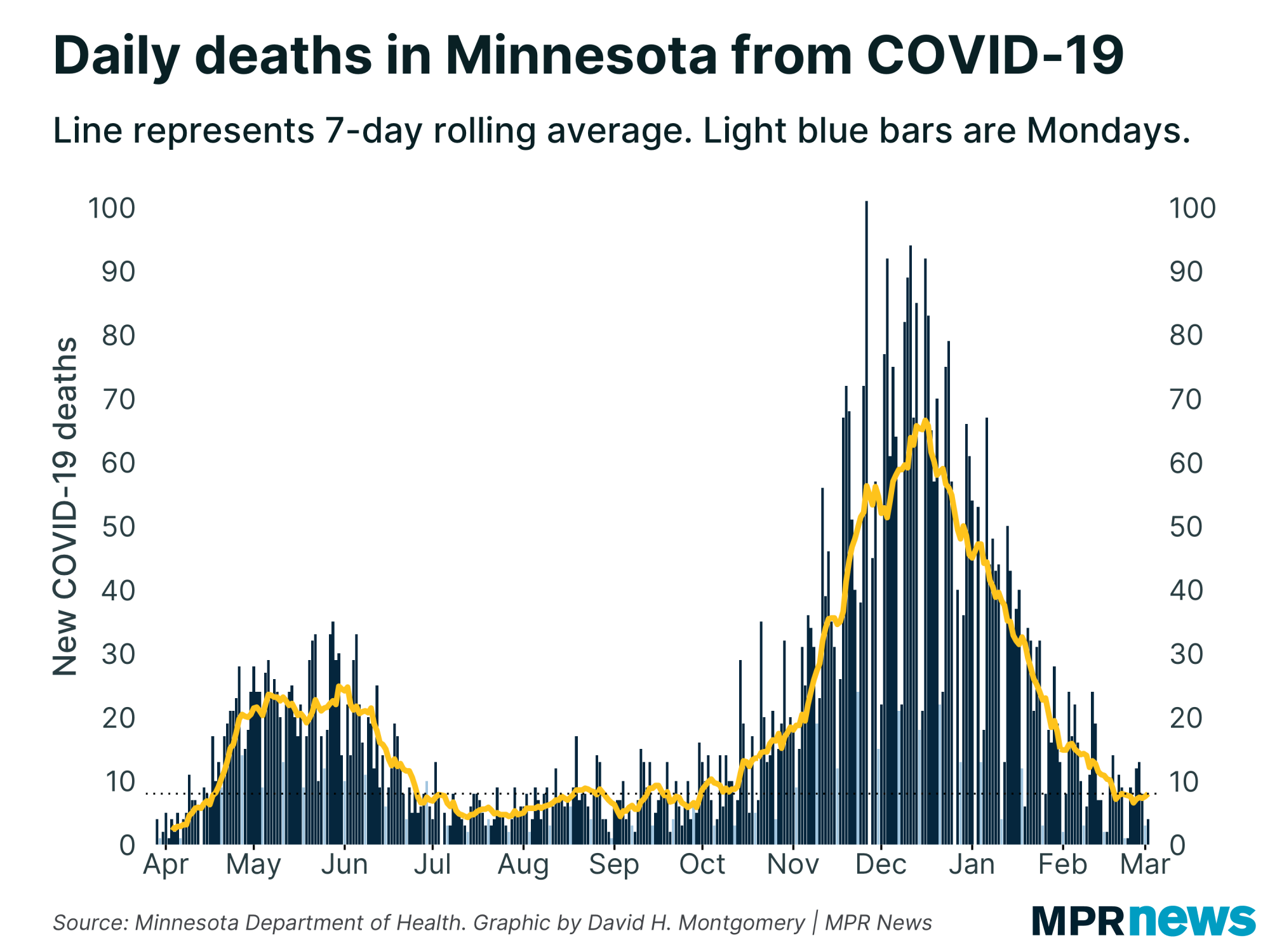 The state has recorded 485,655 total confirmed or probable cases so far in the pandemic, including 443 reported Tuesday. About 97 percent of Minnesotans known to be infected with COVID-19 in the pandemic have recovered to the point where they no longer need to be isolated. 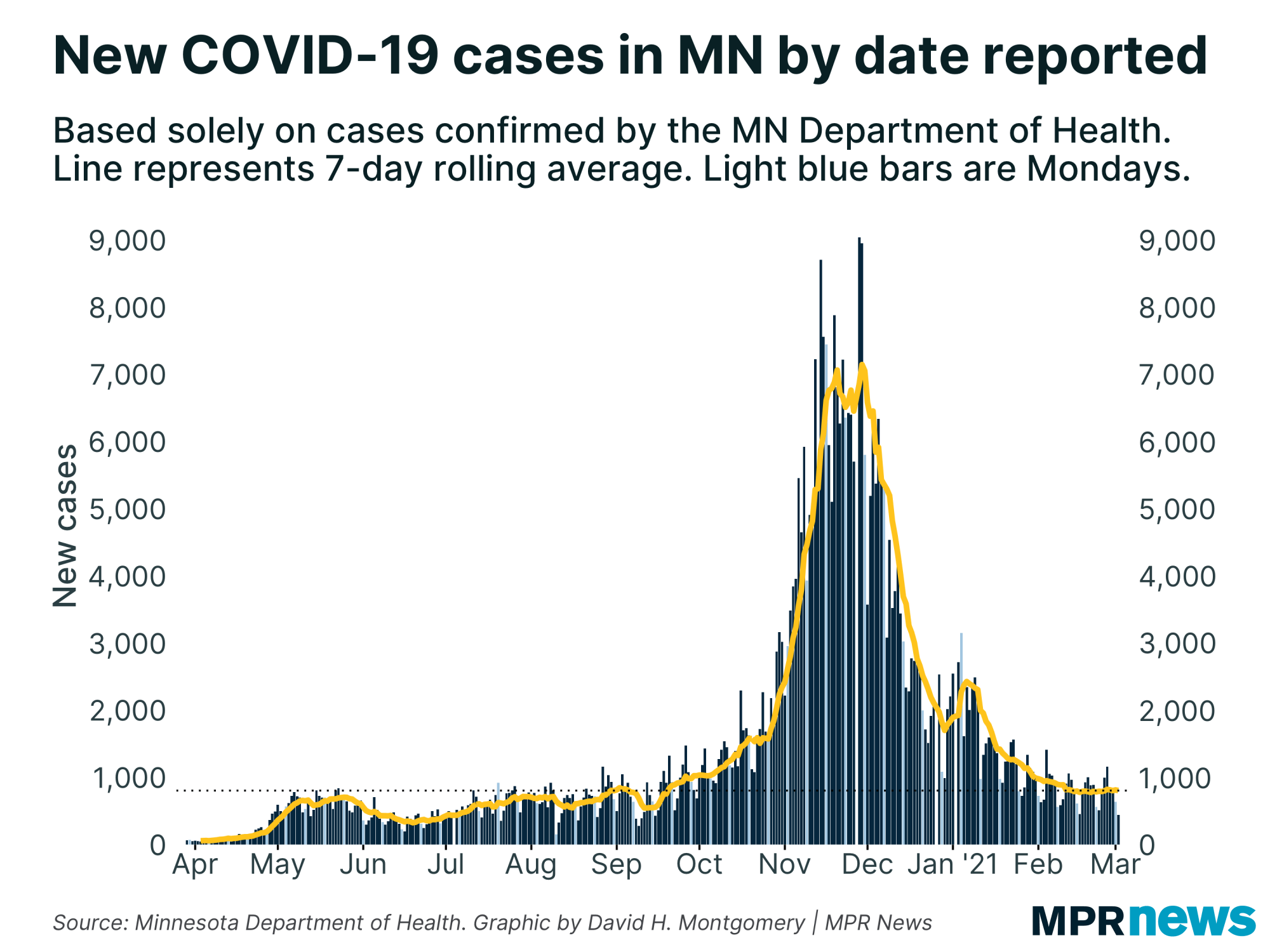 Officials continue to implore Minnesotans to wear masks in indoor public gathering spaces, socially distance and otherwise stay vigilant against the spread of the disease. They remain concerned about COVID-19 strains with the potential to spread. Minnesota has 112 confirmed cases of the so-called U.K. variant and two cases of the Brazil variant.

People in their 20s still make up the age bracket with the state’s largest number of confirmed cases — more than 91,000 since the pandemic began, including more than 48,000 among those ages 20 to 24. 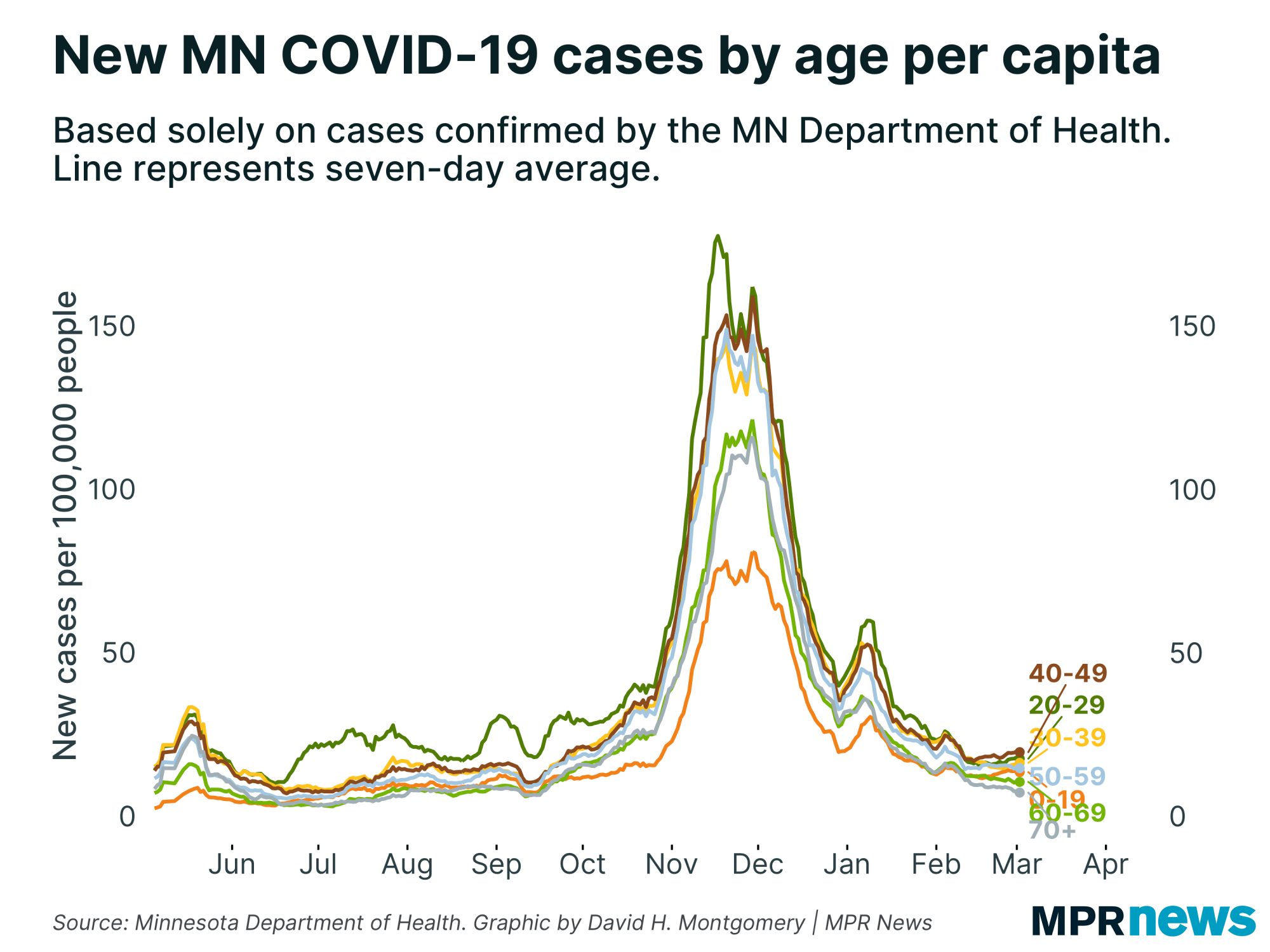 The number of high school-age youth confirmed with the disease has also grown, with more than 38,000 total cases among those ages 15 to 19 since the pandemic began. 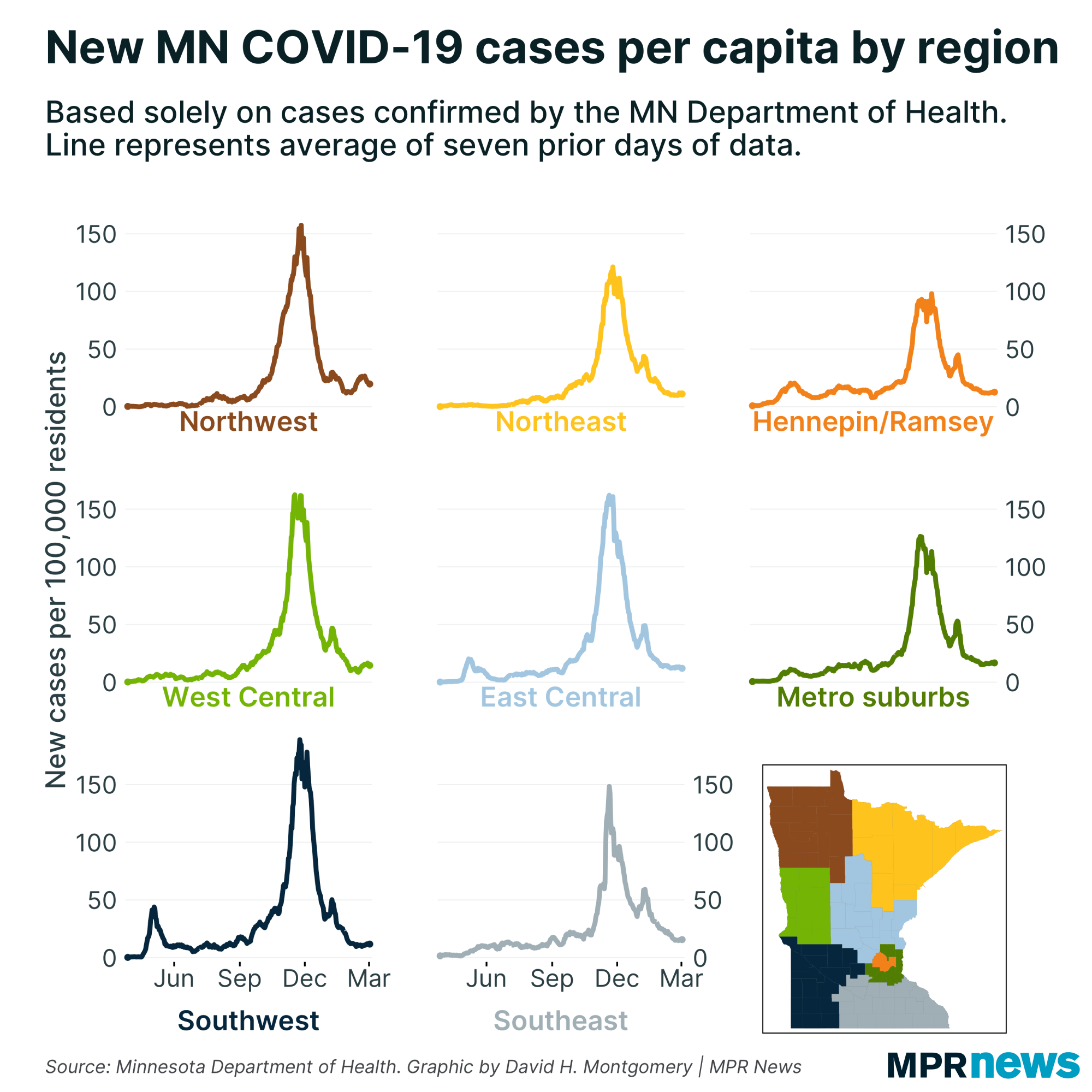 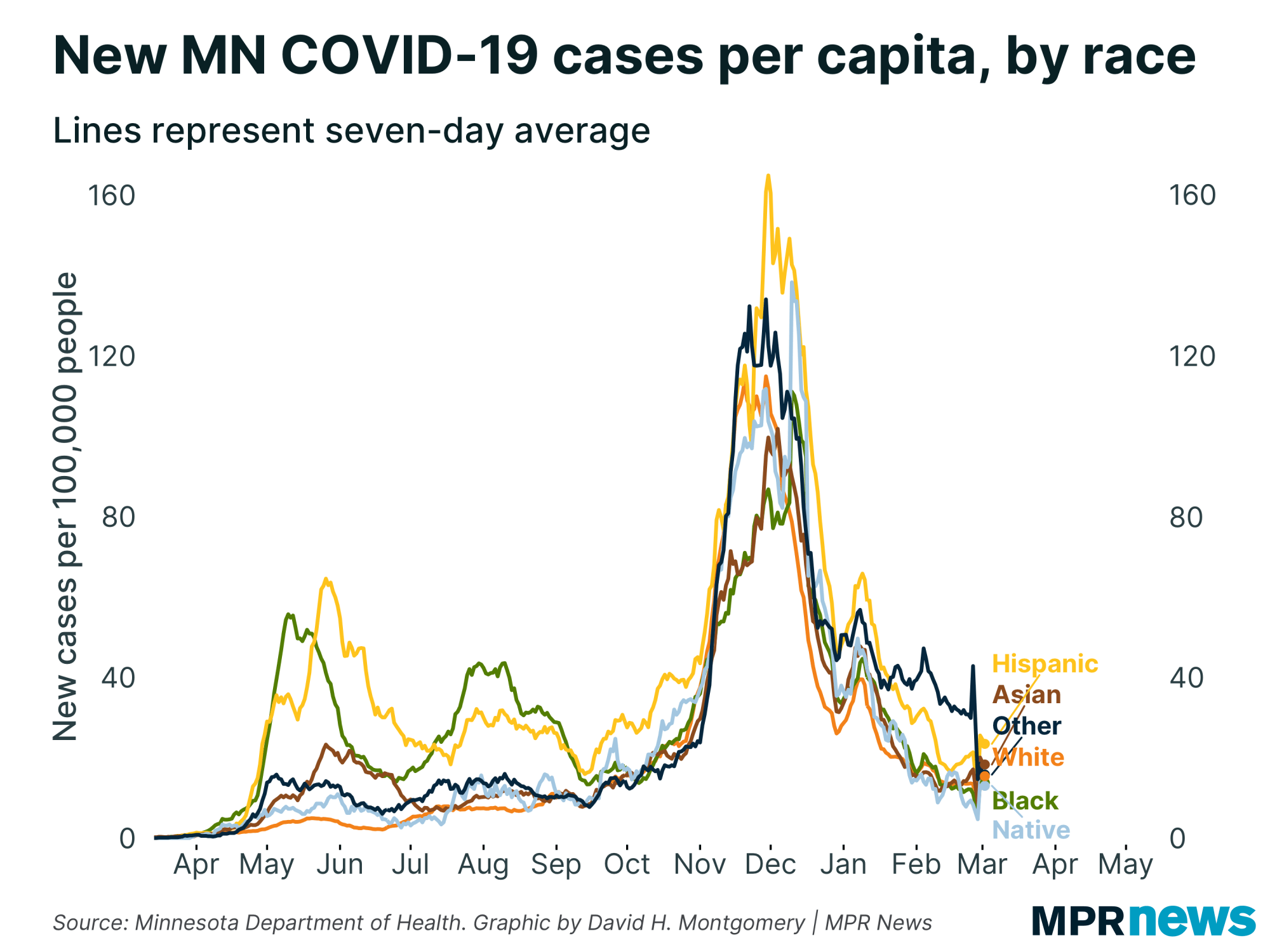 Distrust by communities of color “is the thing that has plagued us for some time,” Walz said last week at a briefing promoting vaccinations for people of color.

Health Commissioner Jan Malcolm said that it’s been a “real problem” not having data broken down by race and ethnicity but that the state may have data to share soon.

Hospital officials in Duluth say that people are foregoing needed health screenings and other medical care, presumably because of lingering fears of COVID-19.

Officials with Essentia Health and St. Luke's in Duluth are urging patients not to put off necessary health care until the pandemic is over. They say they've seen a drop in the number of people coming in for cancer screenings like mammograms and colonoscopies.

"Please, please, please seek care if you need it so that your health doesn't deteriorate. Get the follow up care you need for conditions like diabetes and hypertension. Get your preventive care like colonoscopies and mammography,” Pryor urged patients.

Emergency room doctors in the area also say that patients are sicker than they used to be, suggesting they're waiting longer to seek care.

"My heart just breaks when I see patients who waited too long to see us and as a result have worse outcomes than they would have had otherwise,” said Essentia physician Andy Boehland. “This started to happen last spring when COVID was new and scary, but it's still happening today."

President Biden vows enough vaccine for all U.S. adults by end of May: President Joe Biden says the U.S. expects to take delivery of enough coronavirus vaccines for all adult Americans by the end of May, two months earlier than anticipated, as his administration announced that drugmaker Merck & Co. will help produce Johnson & Johnson’s newly approved shot.

In Cook County, volunteers help vaccinate a grateful public:Cook County, at the tip of Minnesota's North Shore, has the highest vaccination rate in the state. Nearly everyone in the county who is 65 or older has gotten their first COVID-19 shot. Several factors have contributed to Cook County’s success, including a small army of volunteers that’s played a critical role in getting the county vaccinated.

To see the original stories and read more COVID-19 Reporting, follow this link to the MPR News website.  https://www.mprnews.org/story/2021/03/03/latest-on-covid19-in-mn