Last week, Mary Brislance walked into the Cook County Community Center in Grand Marais to get her second dose of the COVID-19 vaccine, and quickly proclaimed her appreciation to the volunteers there to greet her.

"They're frustrated,” she said. “They call, they get on the internet. Nothing happens. So here I am, almost done. I'm excited." 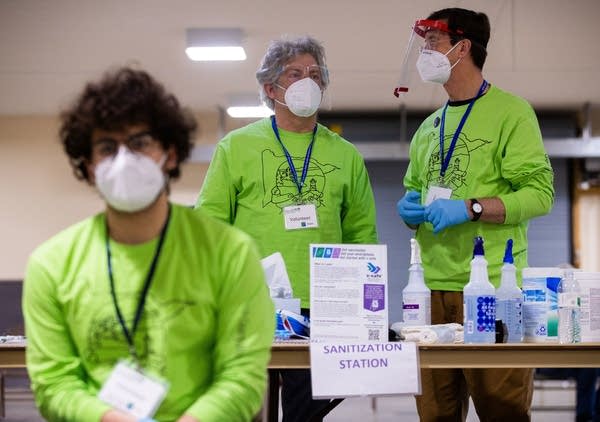 Volunteers Doran Acero (left), Ari Fuad (center) and Kirk Dornfeld (right) pause during one of the few lulls in activity Thursday at the Cook County Community Center in Grand Marais. The community of Grand Marais has spearheaded efforts to get area residents vaccinated.
Derek Montgomery for MPR News

Cook County, at the tip of Minnesota's Arrowhead region, has the highest vaccination rate in the state, at just over 40 percent, as of Saturday. And nearly everyone in the county who is 65 or older has gotten their first COVID-19 shot. Several factors have contributed to Cook County’s success, including a small army of volunteers that’s played a critical role in getting the county vaccinated.

That group was out in force when Brislance arrived for her second dose. After she checked in, one volunteer took her temperature. Then she was greeted by another volunteer, Maggie Anderson, who escorted her into the vaccination clinic — which, during nonpandemic times, is a curling rink — and took her coat.

“Congratulations on your second shot!" she said. 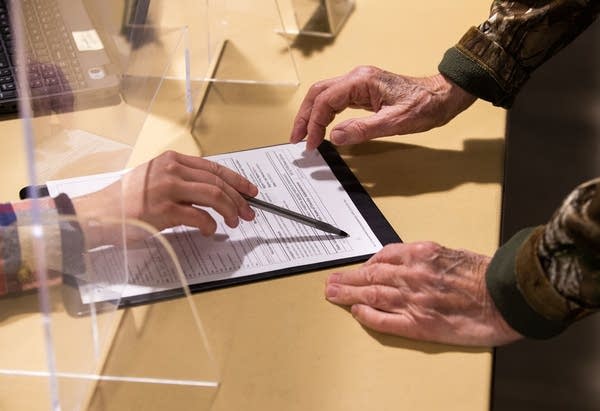 Anderson, 67, is one of more than 60 volunteers from across Cook County who have donated their time to keeping these community vaccination clinics running. She’s a retired psychotherapist from nearby Lutsen — and she used to work at the Sawtooth Mountain Clinic next door.

"As I take a coat, they're saying, ‘I'm so grateful to be here, thanks for what you're doing to volunteer,’ ” she said of the people coming in for their vaccines. “Some people are yippee-yaying, and no one is complaining. I promise, I haven't heard a single complaint."

Nearly 90 percent of the county's older adults — as of Saturday — have been vaccinated. Those are the highest rates in the state. And Cook County is also the only one of Minnesota’s 87 counties where no one has died from COVID-19.

That's partly due to its remoteness, and its small population — only about 5,200 people live here. 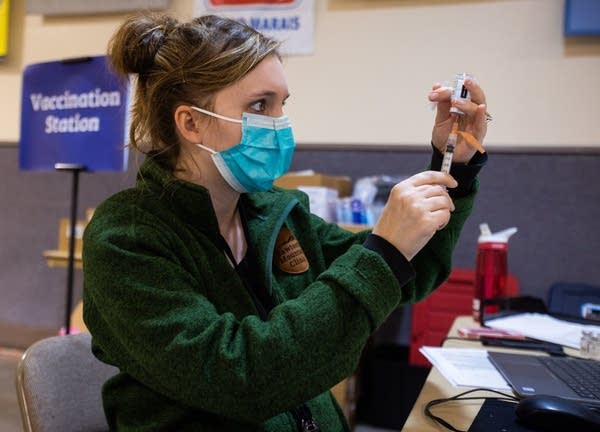 Afton Bonin, director of nursing at the Sawtooth Mountain Clinic, fills a syringe with the Moderna vaccine in preparation for people arriving Thursday for their second dose at the Cook County Community Center in Grand Marais.  Photo: Derek Montgomery for MPR News

But since the beginning of the pandemic, the county has taken aggressive steps to keep the virus at bay — and, once it arrived, from spreading. Volunteers like Anderson — and Nathan and Joni Kristenson — have been a big part of that effort.

The Kristensons, both retired public health nurses, began volunteering almost a year ago — first at a supermarket, after all three of Grand Marais' grocery stores closed their doors and shifted to curbside service.

"People would phone in their orders,” Joni Kristenson said. “Our job was to get those orders, to bag them up, to call the people and say, 'We're out of this. But would you like this instead?' "

Then, as tourists began to flock to the North Shore in early summer — before Minnesota’s statewide mask mandate was in place — Nathan Kristenson joined others who had volunteered to stand in shifts outside stores in Grand Marais, the county seat and its largest city. They were there to help limit the number of people inside at a time, and ask people to wear masks. 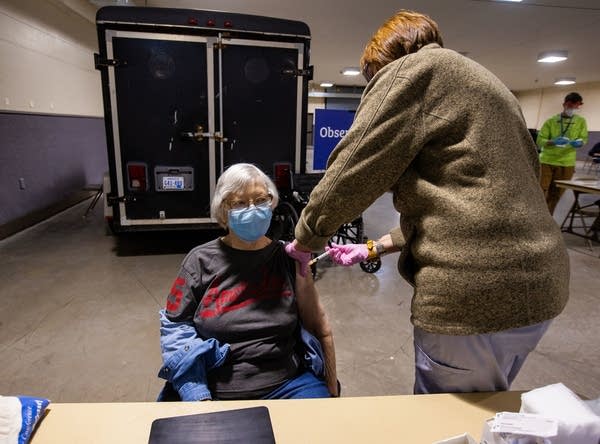 "For the most part, people were grateful,” he said. “Other times people would get very angry."

The Kristensons also volunteered to work as contact tracers for the local public health department, helping to track down people who have come in contact with people who tested positive for COVID-19, and urging them to quarantine to limit the spread of the virus.

Health leaders in the county say volunteers played a critical role, in those early days, in keeping the county’s case counts low.

And by keeping the virus so well in check, said Dr. Kurt Farchmin, a physician at Sawtooth Mountain Clinic, the county has been free for months to focus its efforts on planning for a successful vaccine rollout. Many of the people involved — staff and volunteers alike — have worked on both. His clinic has been partnering with Cook County to host the community vaccination events. 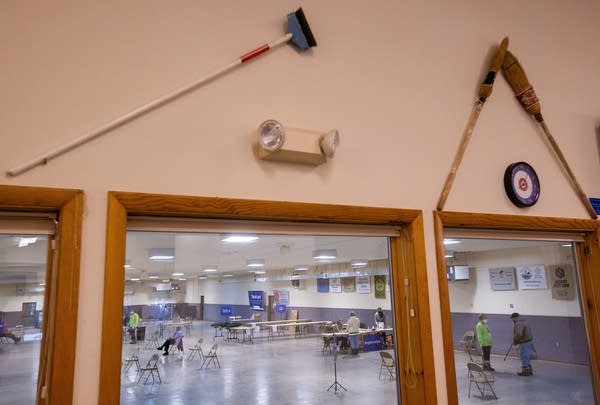 Curling equipment adorns the walls outside the vaccination clinic at the Cook County Community Center Thursday. Under normal circumstances, the area where the clinic was held is usually a curling arena.  Photo: Derek Montgomery for MPR News

Farchmin also credits the close collaborations of the clinic, county public health staff and the Grand Portage Band of Lake Superior Chippewa, whose reservation lies about 40 minutes east of Grand Marais, in the northeasternmost corner of the state.

All of that coordination, and the multiple streams of vaccine that comes from it, has been aided, he said, by a community that so far has been eager to get vaccinated — and to help others get their shots, too.

Andrea Orest, who coordinates the county's public health volunteers, said that, without them, there just wouldn’t be enough public health or clinic staffers to do contact tracing, or to organize multiple large-scale vaccination clinics.

"That solid base of volunteers and the people who are always willing to step up and help definitely got us to where we are," she said. 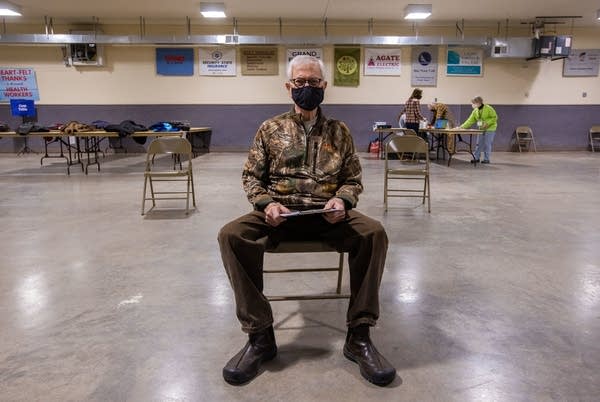 The volunteers sign up through Minnesota Responds Medical Reserve Corps, a framework of volunteer programs around the state coordinated by the Minnesota Department of Health. Orest said the volunteers’ logistical work staffing the vaccine clinics has been critical to making them run smoothly — but they’ve also brought an intangible benefit along with them: Community.

"When you go to something like this that you might be nervous about, to see so many people that you know from the community being active in it, I think is really important,” she said.

It's also been important for the volunteers themselves. It's a way for them to connect with their neighbors during a socially isolating time that, hopefully, with the help of the vaccine they're making possible, is beginning to get closer to an end. 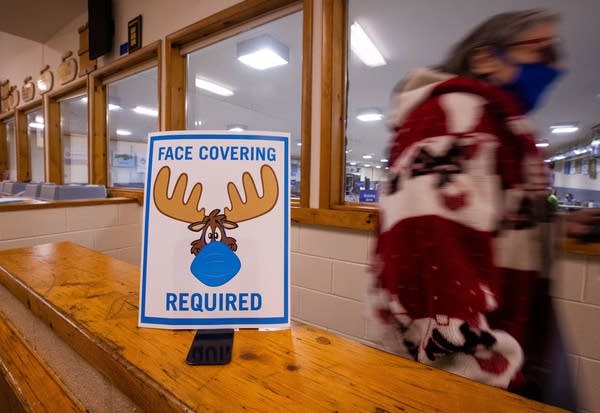 
To hear the audio version of this story and read related articles, follow this link to the MPR News website.  https://www.mprnews.org/story/2021/03/02/in-cook-county-volunteers-help-vaccinate-a-grateful-public
Public Safety