COVID-19 watchers have kept a wary eye for weeks now on Minnesota vaccinations. A late January surge brought excitement and the frustration as the pace flattened or declined through a big chunk of February.

Vaccination traction, though, may finally be here.

Health Department data shows state inoculations on an upswing with roughly 159,000 shots reported the past three days. The seven-day rolling average is running at more than 36,000 a day currently, the highest it’s been since vaccinations began in late December.

Officials had been hoping the arrival of shipments delayed by the recent nationwide cold snap atop the state’s regular allotment of doses would start to surface in daily vaccinations counts. That appears to be happening.

There’s reason to believe the vaccination rate might continue to rise with the addition of the newly approved Johnson & Johnson vaccine, which only requires one dose. More than 45,000 doses of the newly approved vaccine should arrive in Minnesota this week, state health officials said Monday. 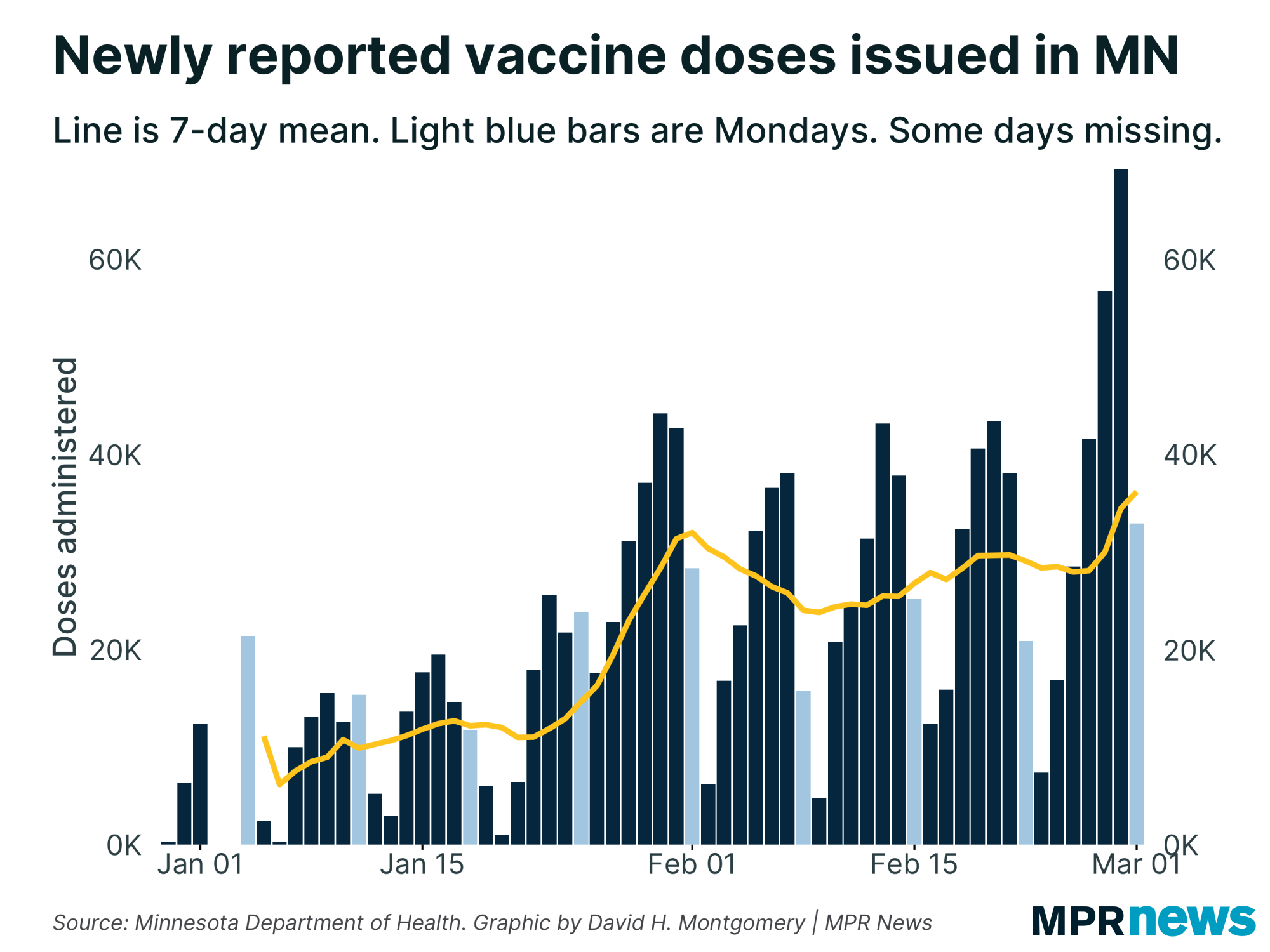 About 16.2 percent of Minnesotans age 16 and older — more than 900,000 people — had received at least one dose as of Monday’s update, with about 8.4 percent completely vaccinated. 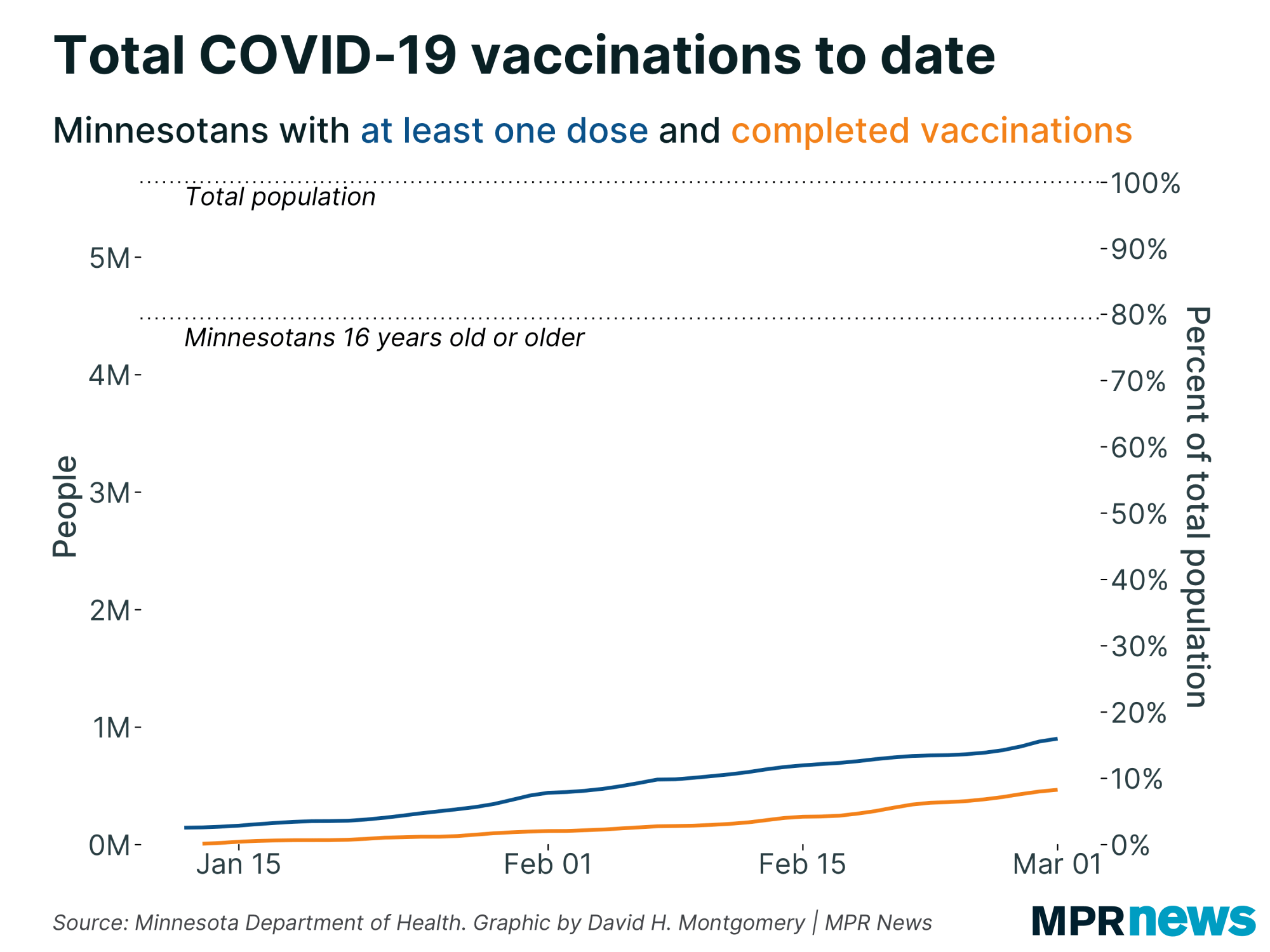 More than 52 percent of Minnesotans 65 and older have received at least one shot currently, according to Health Department calculations. That’s important since Gov. Tim Walz has said the state will expand vaccination eligibility when 70 percent of that population gets a first dose.

While the pace of vaccinations is picking up, Minnesota’s COVID-19 numbers show the state holding fairly steady in a good way.

Hospitalization rates remain encouraging at levels last seen before the late-fall surge in cases. The Health Department on Monday reported 230 people in Minnesota hospitals with COVID-19, with 47 needing intensive care, levels not seen since the spring. 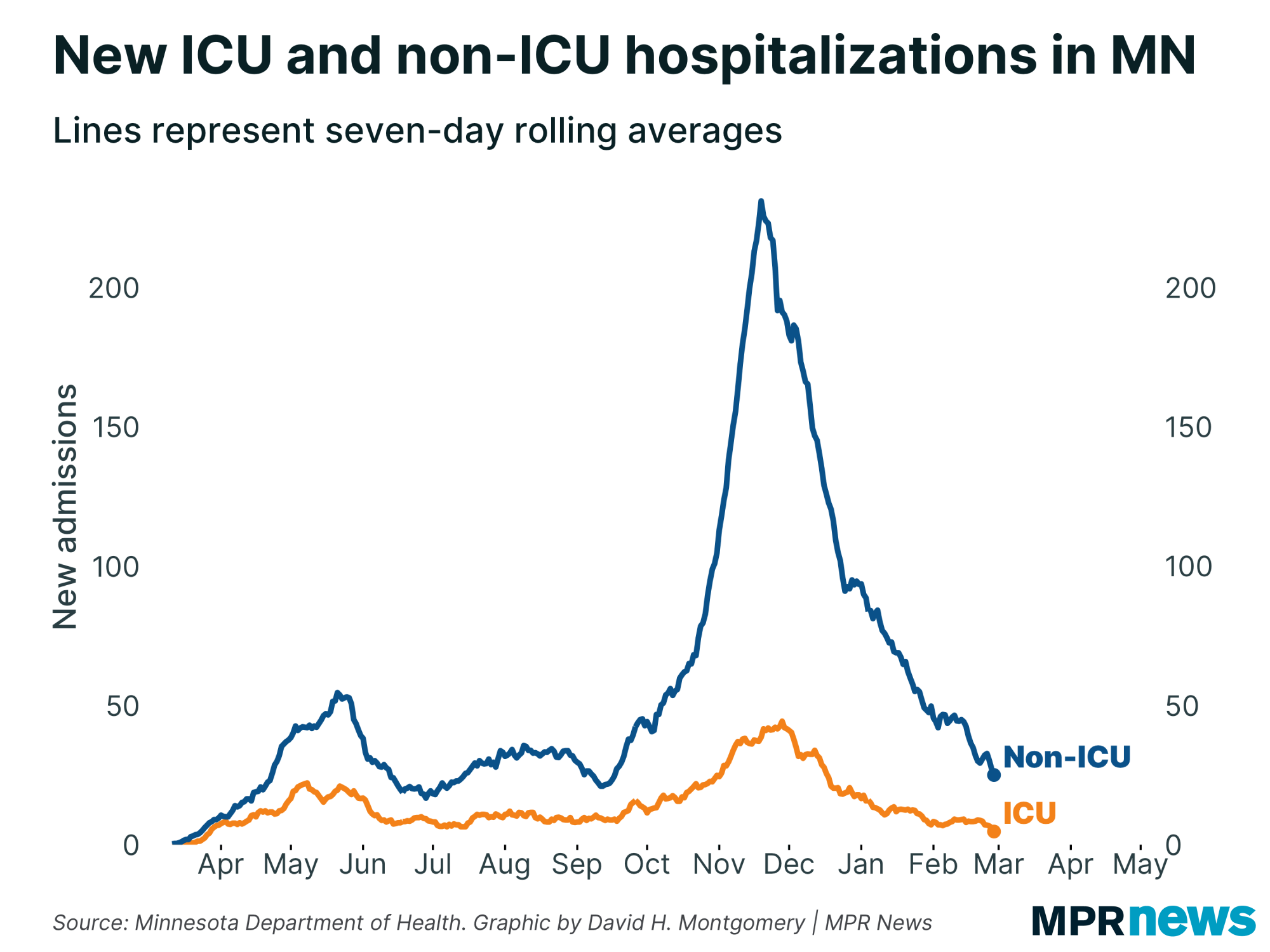 Known, active cases came in at 7,097, continuing a trend that stayed fairly stable through February and remains down dramatically from late November and early December, when active cases hovered around 50,000. 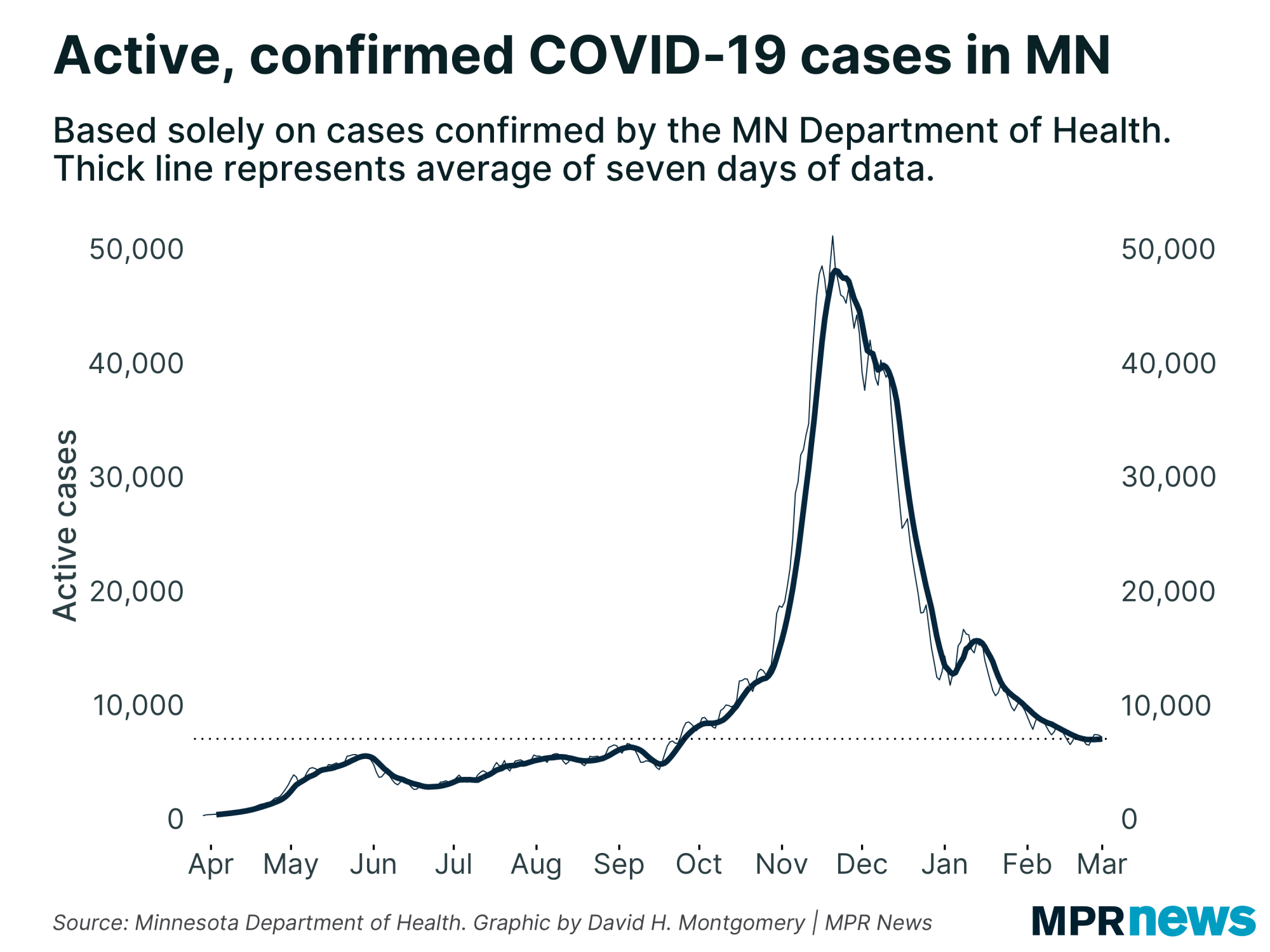 Three newly reported deaths raised Minnesota’s toll to 6,486. Among those who’ve died, about 63 percent had been living in long-term care or assisted living facilities; most had underlying health problems. 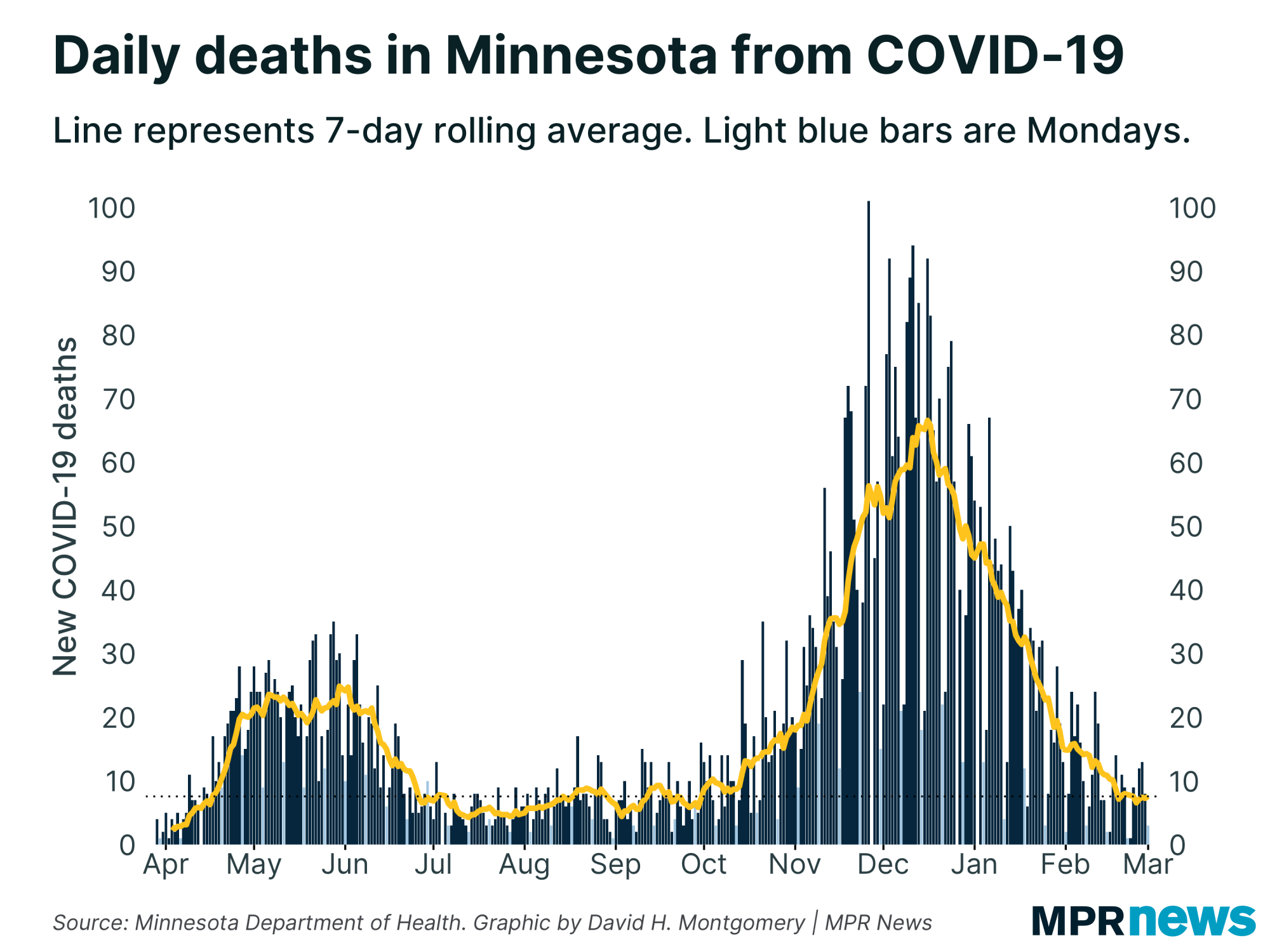 The state has recorded 485,230 total confirmed or probable cases so far in the pandemic, including 636 reported Monday. About 97 percent of Minnesotans known to be infected with COVID-19 in the pandemic have recovered to the point where they no longer need to be isolated. 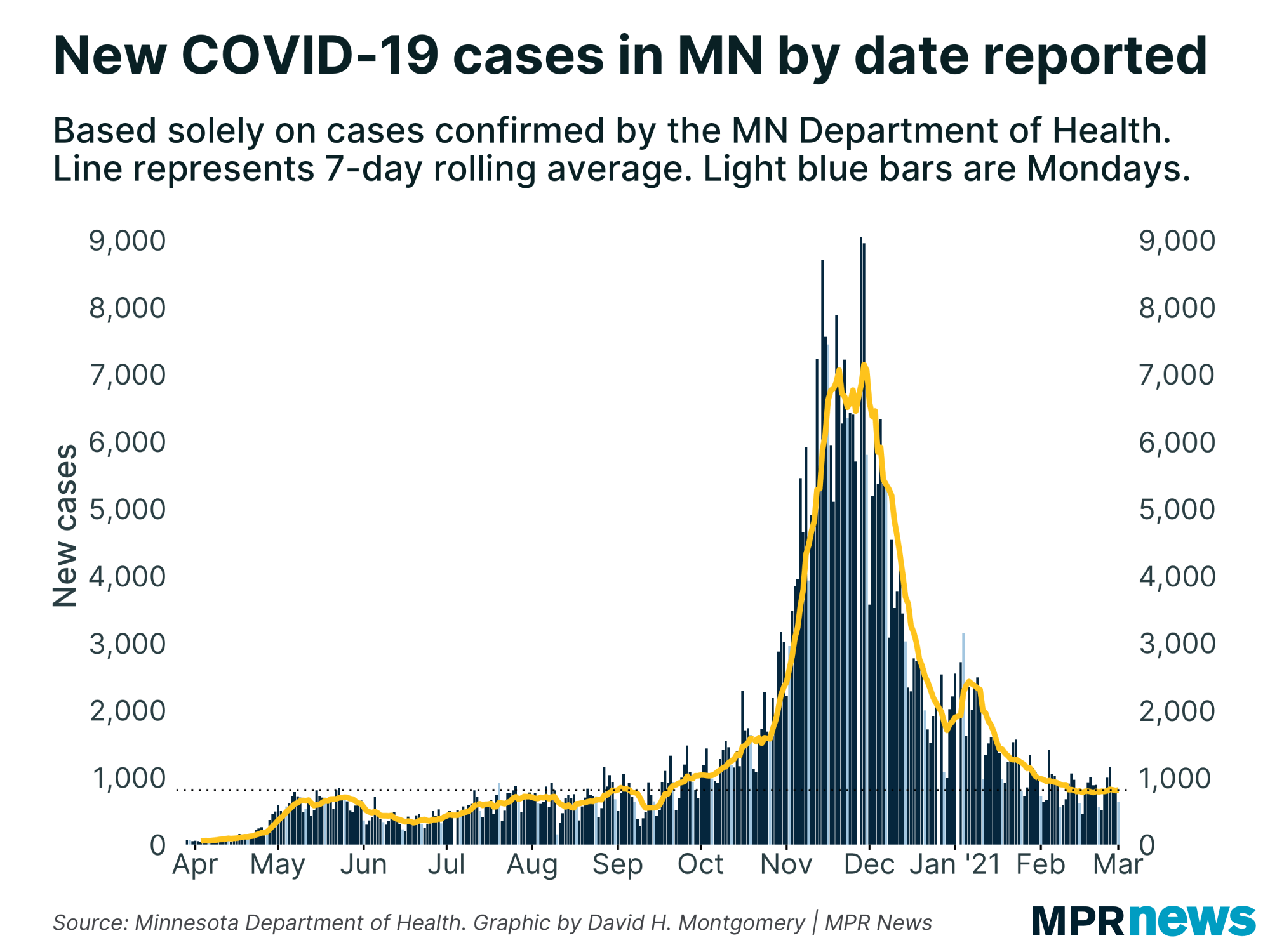 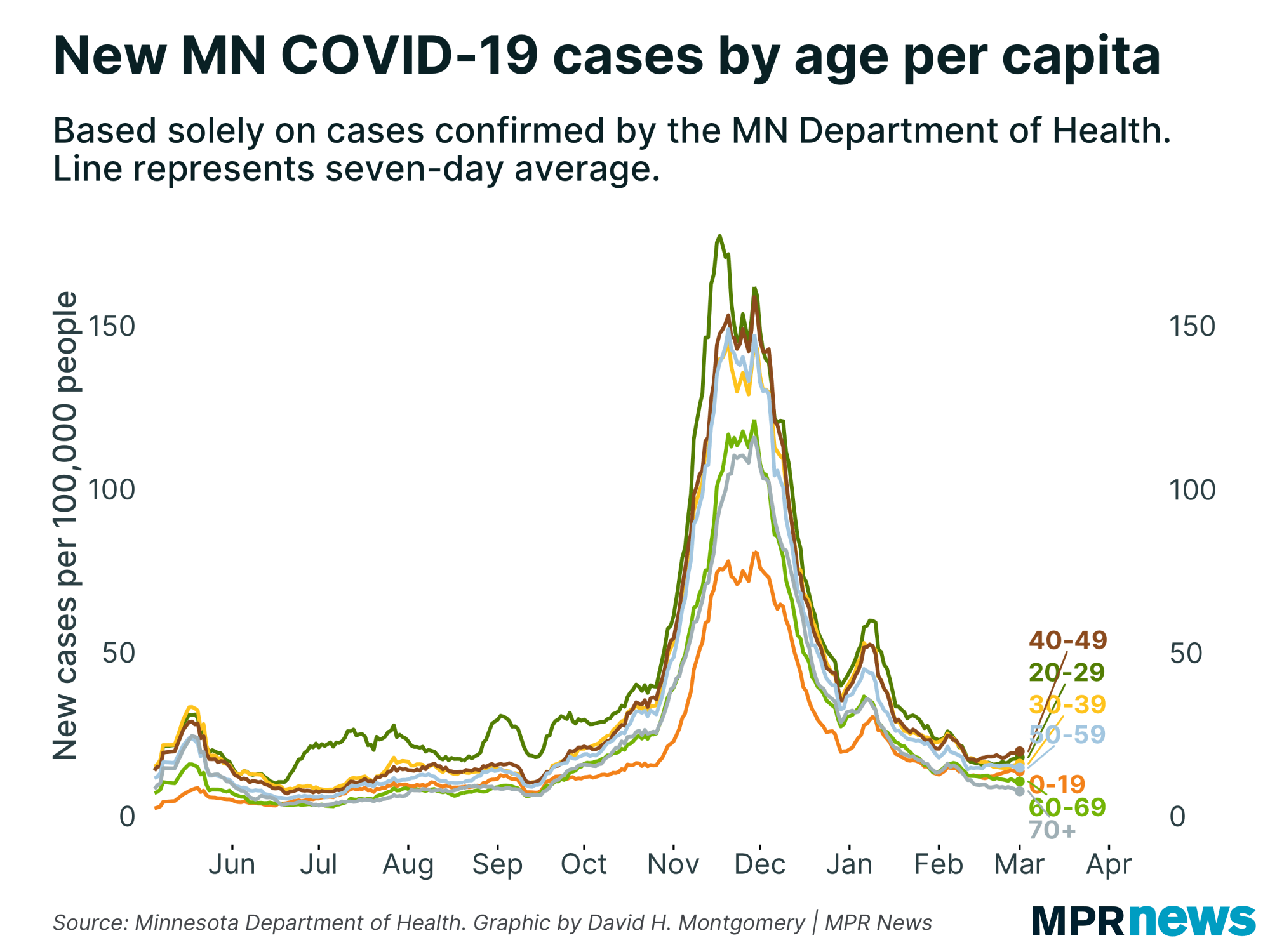 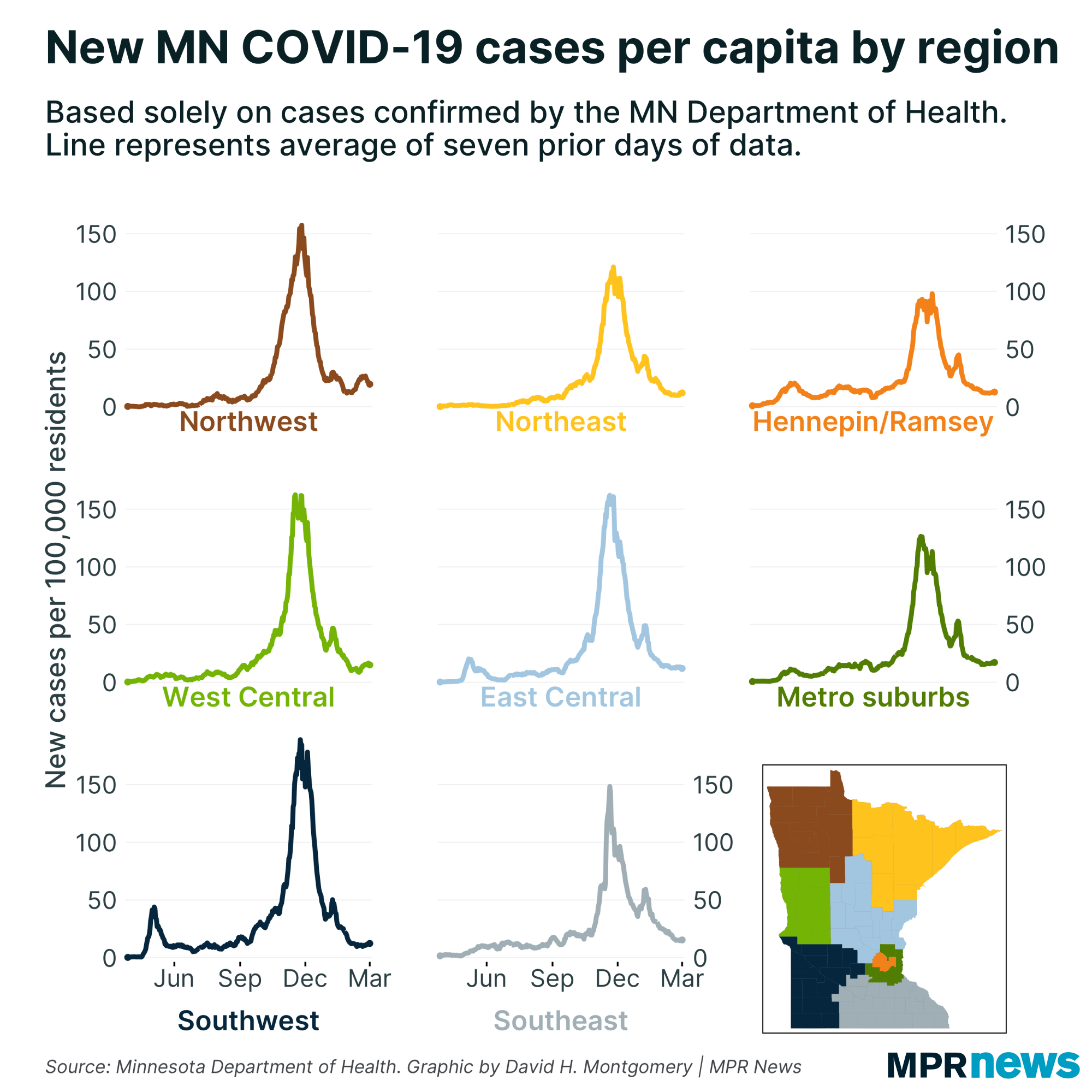 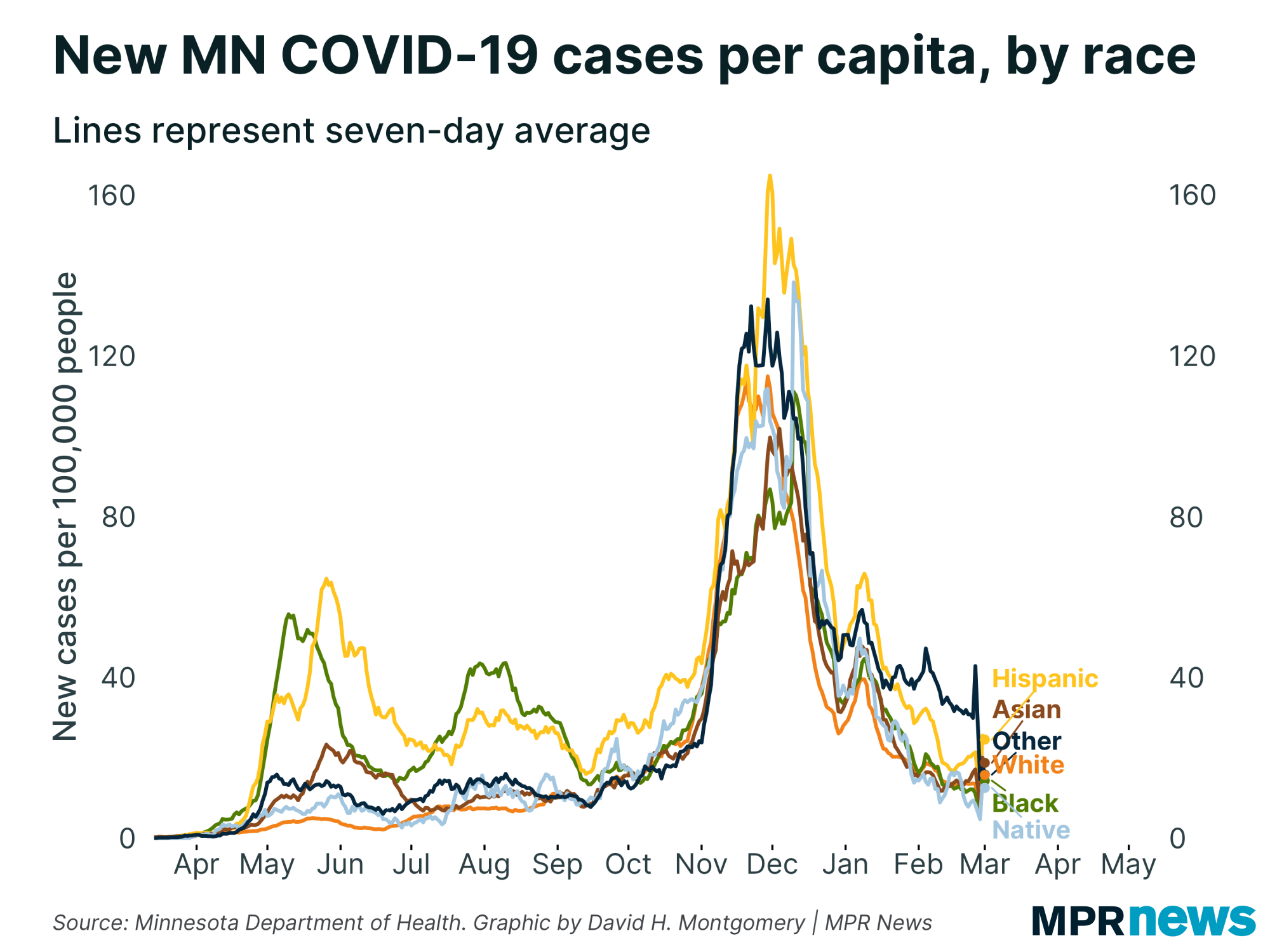 Distrust by communities of color “is the thing that has plagued us for some time,” Walz said last week at a briefing promoting vaccinations for people of color.

Health Commissioner Jan Malcolm said that it’s been a “real problem” not having data broken down by race and ethnicity but that the state may have data to share soon.

Some MN school districts will bring older learners back later than Walz wanted: Minnesota’s three largest districts have announced plans to return middle and high school students to in-person learning. But many students won’t transition to new in-person schedules until after spring break.

Are you vaccinated? Here’s what to know about post-vaccination risks: As the COVID-19 vaccination rate ticks upward, many people are wondering if it’s safe to see their families or if they should continue to wear masks. Two experts shared their tools for understanding the science and assessing risks.

To see the original posts and read more COVID-19 reporting, follow this link to the MPR News website.  https://www.mprnews.org/story/2021/03/02/latest-on-covid19-in-mn