Latest on COVID-19 in MN: 'Let's finish this thing' Governor Tim Walz says every Minnesotan should be able to get a shot by the summer. The state’s vaccination effort, however, continues to struggle for traction.

Walz laid out plans Thursday to get COVID-19 shots into the arms of every Minnesotan who wants one by the summer while keeping the state’s short-term focus on residents 65 and older. He even suggested the Minnesota State Fair was possible this year.

"The finish line's there. Let's finish this thing,” Walz said in remarks that were mostly upbeat about the state’s current circumstances on the one-year anniversary of the first Minnesotan showing COVID-19 symptoms.

The governor’s remarks, though, were tempered by data showing Minnesota’s COVID-19 vaccination pace remains frustratingly flat even as the overall pandemic picture continues to brighten.

The state Health Department on Thursday reported 28,517 new vaccinations, down from the prior Thursday, with the trend line stuck flat to slightly declining.

Officials hope the arrival of some 45,000 weather-delayed shots on top of the state’s regular 100,000-dose allocation will soon jump-start the pace of vaccinations, although it hasn’t happened yet and the pressure to move faster is rising. 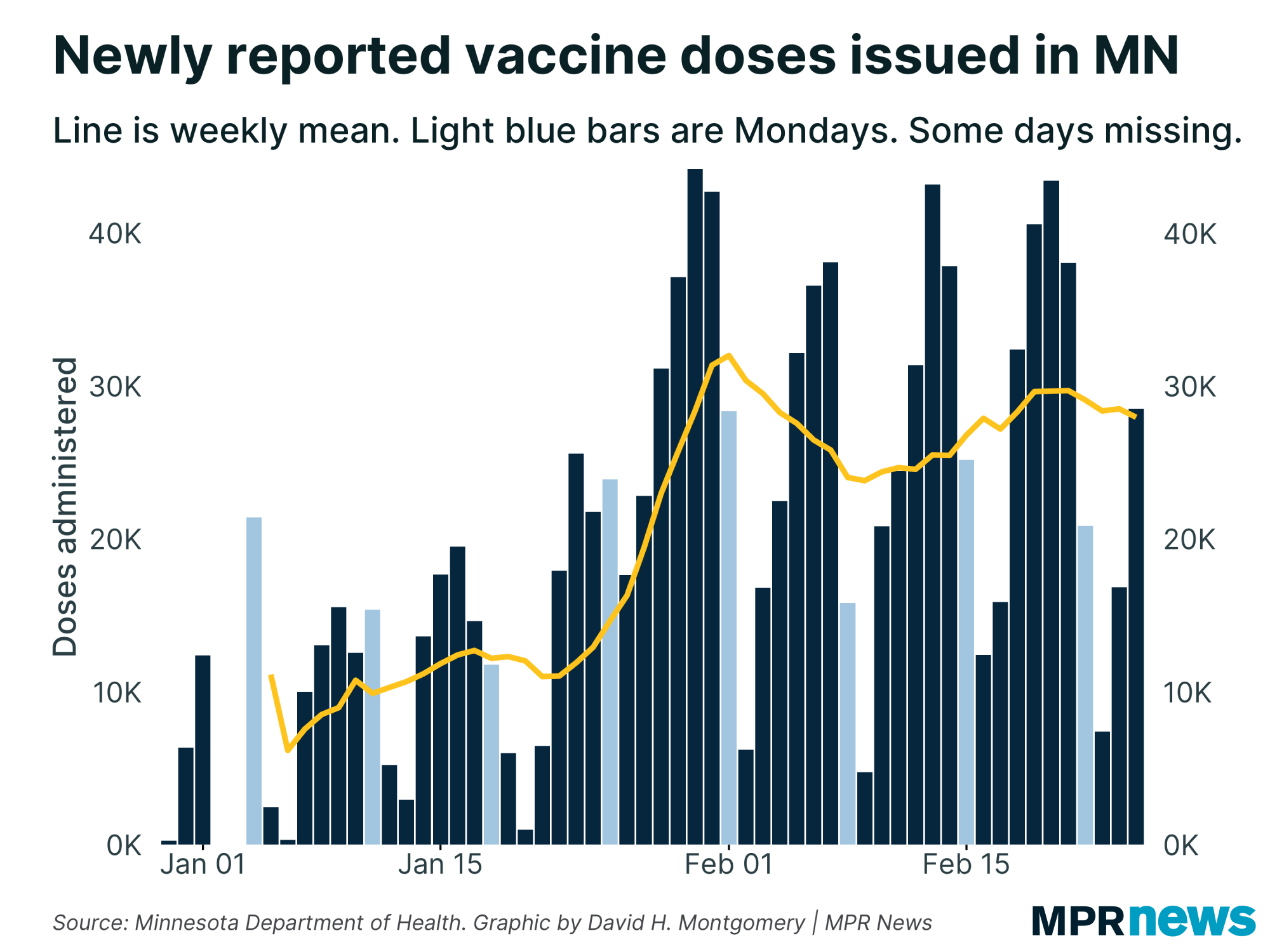 ‘We can’t do it fast enough’

Walz said the state wouldn’t expand eligibility for COVID-19 vaccines until at least 70 percent of residents age 65 and older get a first dose — a threshold officials expect to reach by the end of March.

Once that threshold has been met, Minnesota will open vaccinations to others based on underlying health conditions and workplace exposure risk, including some 45,000 employees working at Minnesota food processing plants.

The governor and other officials indicated that their timeline was conservative and expressed hope that it would move faster as more supplies — including the single-dose Johnson & Johnson vaccine now under federal review — become available.

"We can't do it fast enough. Every single governor in this country is hearing the same things,” Walz said of vaccinations. “It's simply a supply and demand issue, folks There's not enough vaccines still at this point in time.” 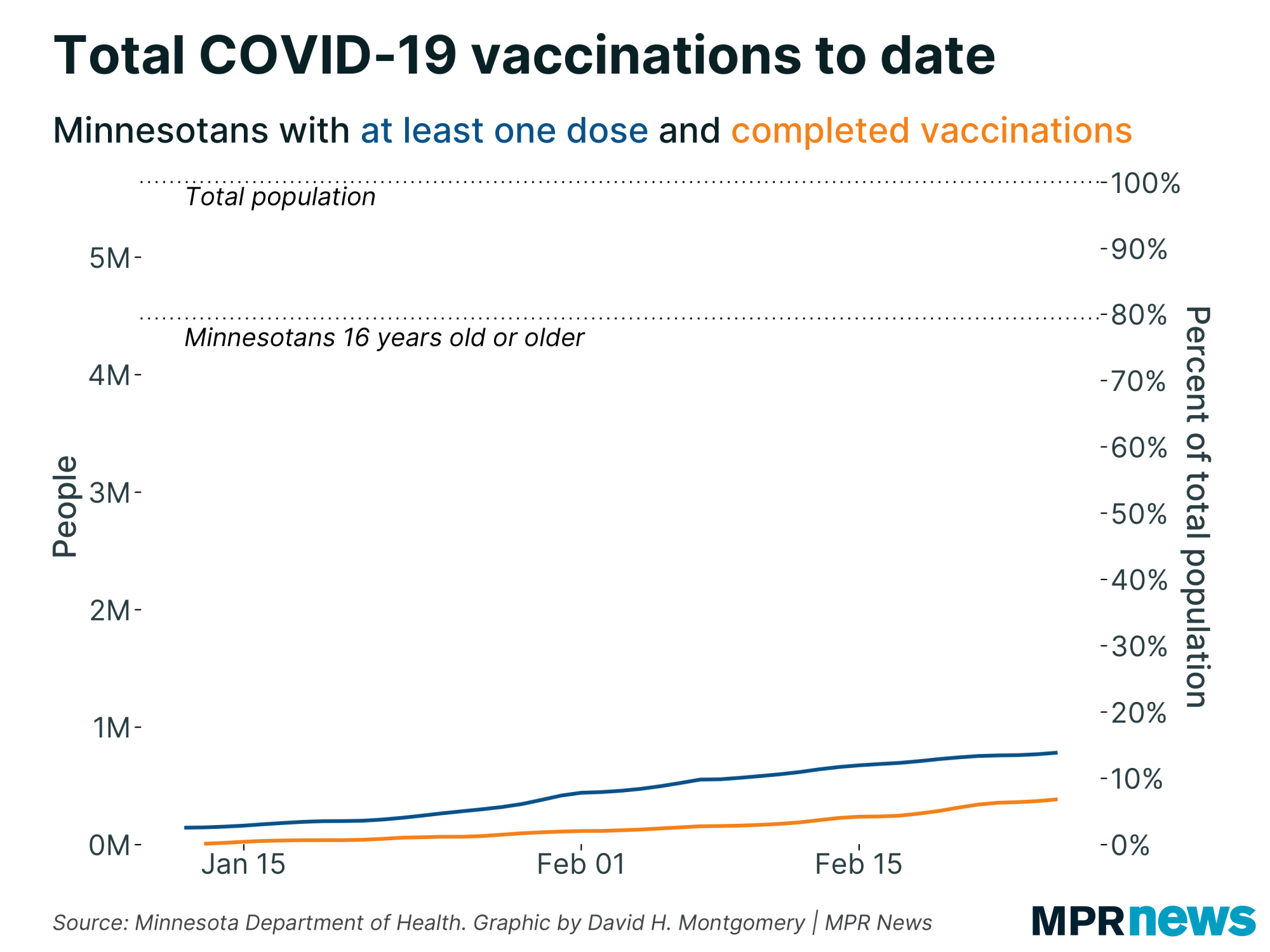 About 14.1 percent of Minnesotans age 16 and older had received at least one dose as of the the Thursday update, with about 6.9 percent completely vaccinated.

More than 43 percent of Minnesotans 65 and older have received at least one shot currently. However, people in that age group are still struggling to make appointments to get vaccinated.

Minnesota currently ranks 17th among states in doses administered per 100,000 people, according to data collected by the federal Centers for Disease Control and Prevention. Minnesota had been as low as 25th on that ranking.

Hospitalization rate remain encouraging and down to levels from last fall. There were 265 people with COVID-19 in Minnesota hospitals as of Wednesday. The number needing intensive care fell to 50. 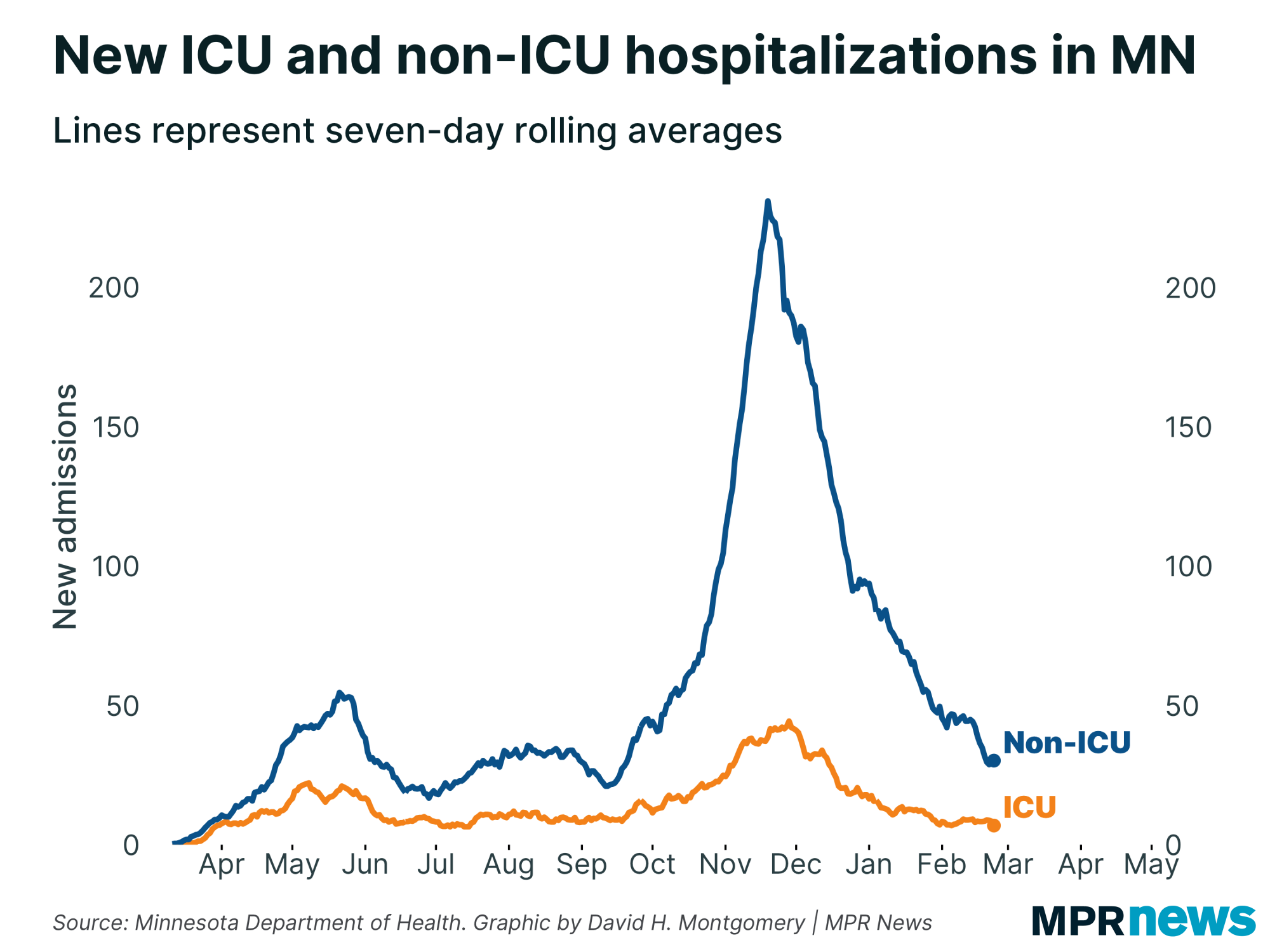 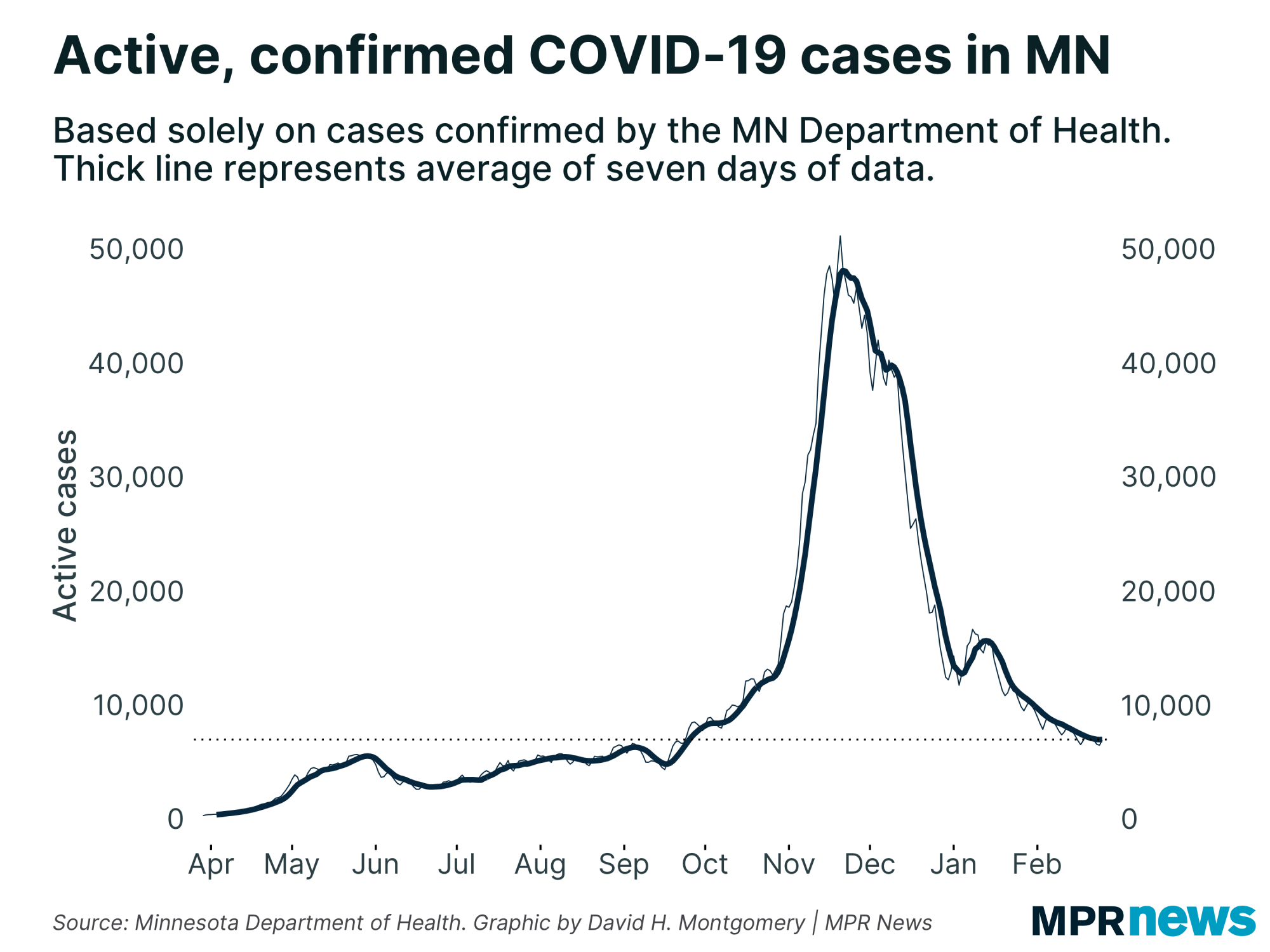 Seven newly reported deaths raised Minnesota’s toll to 6,450. Among those who’ve died, about 63 percent had been living in long-term care or assisted living facilities; most had underlying health problems. 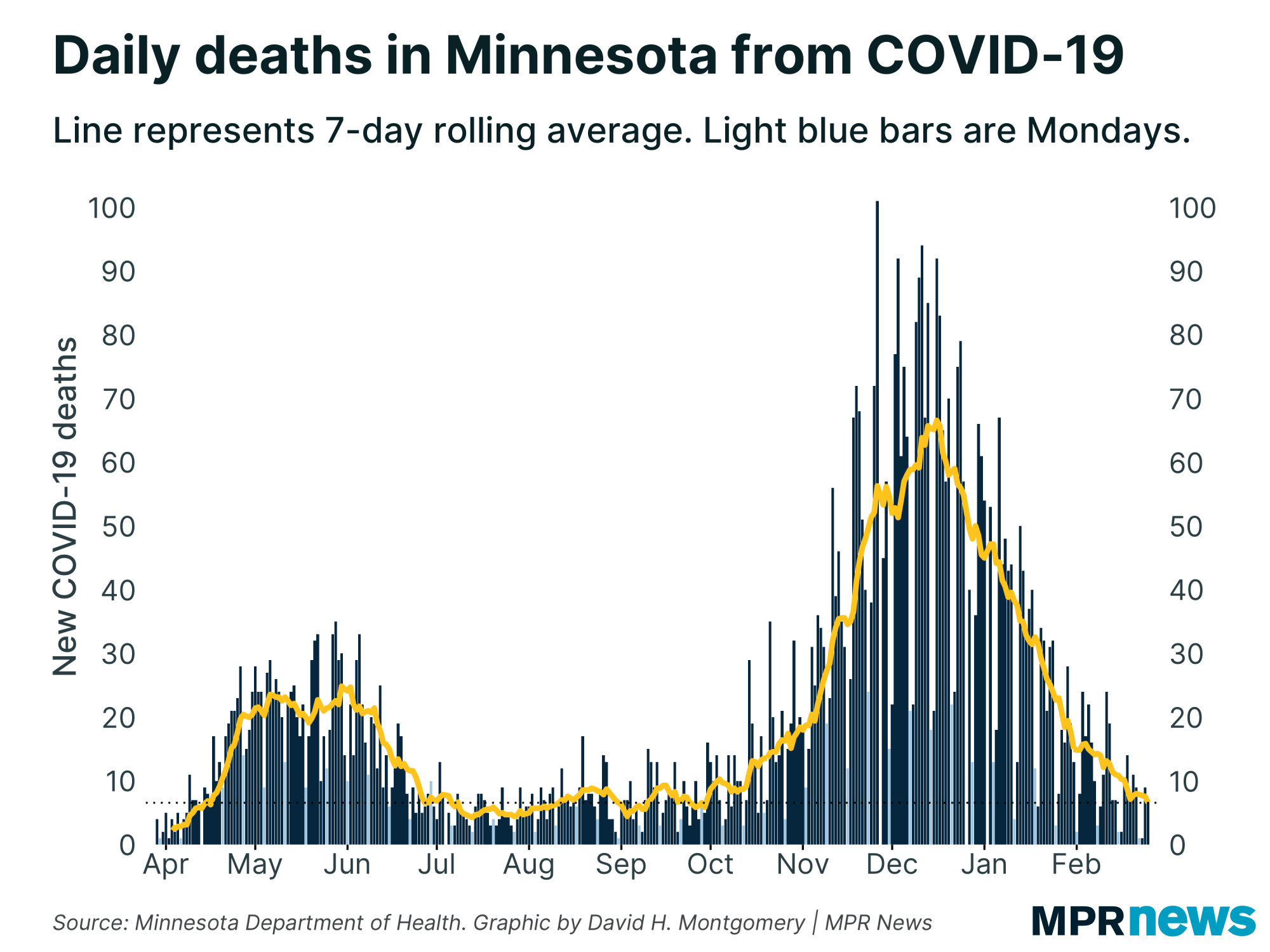 The state has recorded 481,831 total confirmed or probable cases so far in the pandemic, including 996 reported Thursday. About 97 percent of Minnesotans known to be infected with COVID-19 in the pandemic have recovered to the point where they no longer need to be isolated. 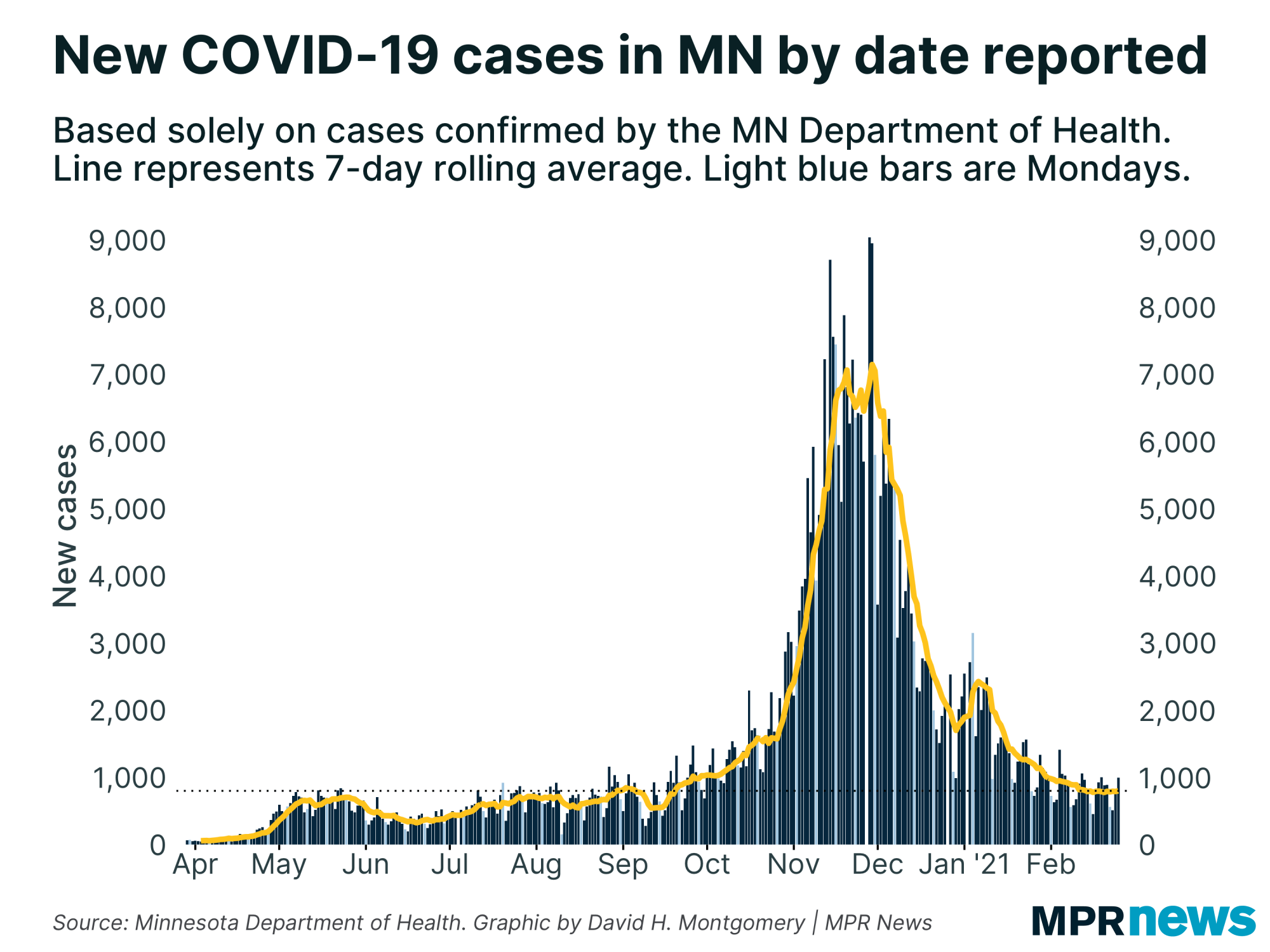 People in their 20s still make up the age bracket with the state’s largest number of confirmed cases — nearly 91,000 since the pandemic began, including nearly 48,000 among people ages 20 to 24. 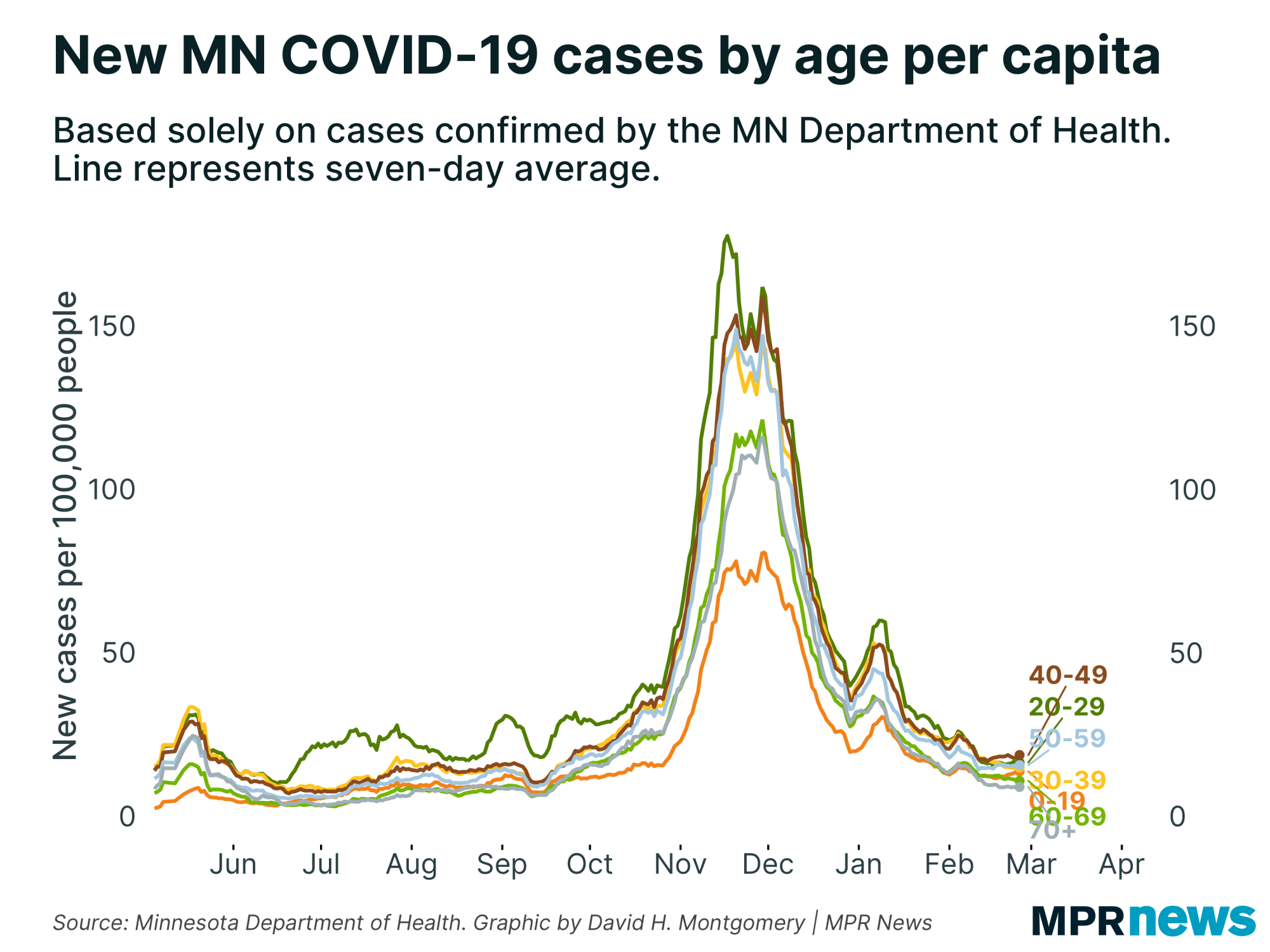 There has been an uptick in cases in northwestern Minnesota recently, although it’s unclear why. 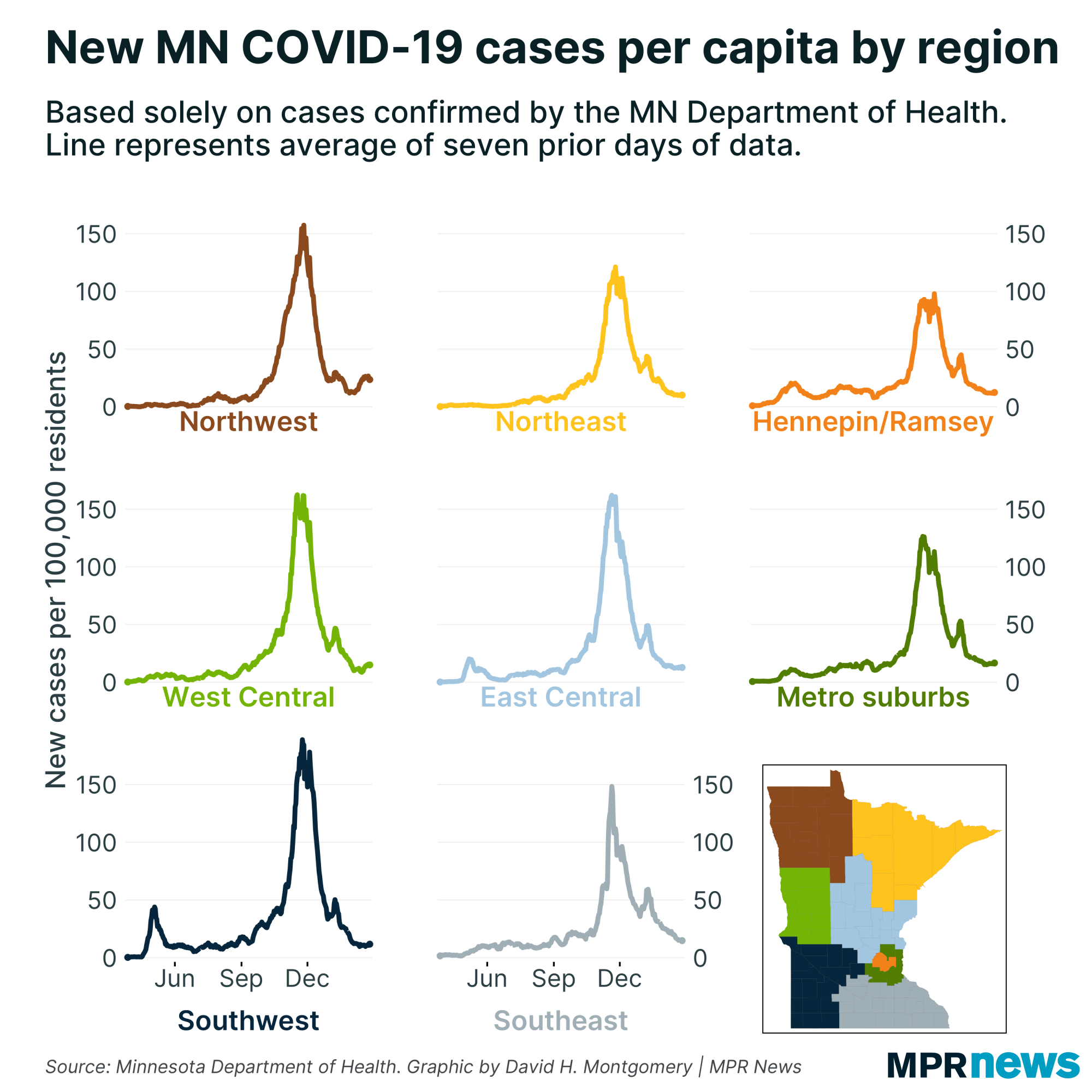 On Wednesday, Dan Huff, an assistant state health commissioner, expressed concern about the uptick seen in the northwest and west-central regions, saying it showed the state needed to remain vigilant against spread.

“The vaccines are coming and continue to increase, and that is fantastic news, but we’re not there yet,” he said, adding, that the state doesn’t have enough people vaccinated “to stop the next wave.” 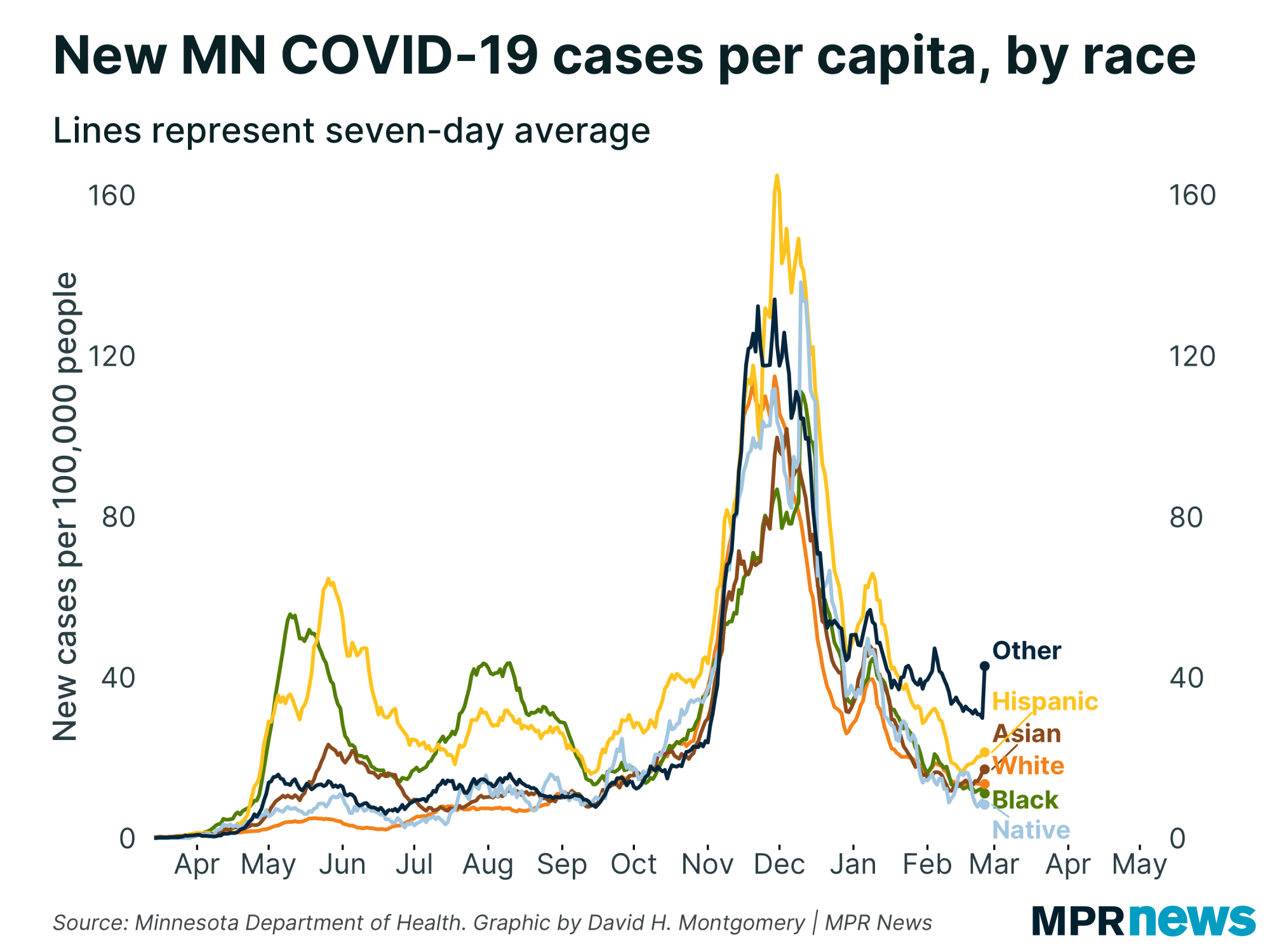 Health Commissioner Jan Malcolm said that it’s been a “real problem” not having data broken down by race and ethnicity but that the state may have data to share by next week.

Families with kids urged to test every 2 weeks

While it’s not a requirement, the effort will help protect progress the state’s making to limit the spread of the virus, Huff told reporters Wednesday. 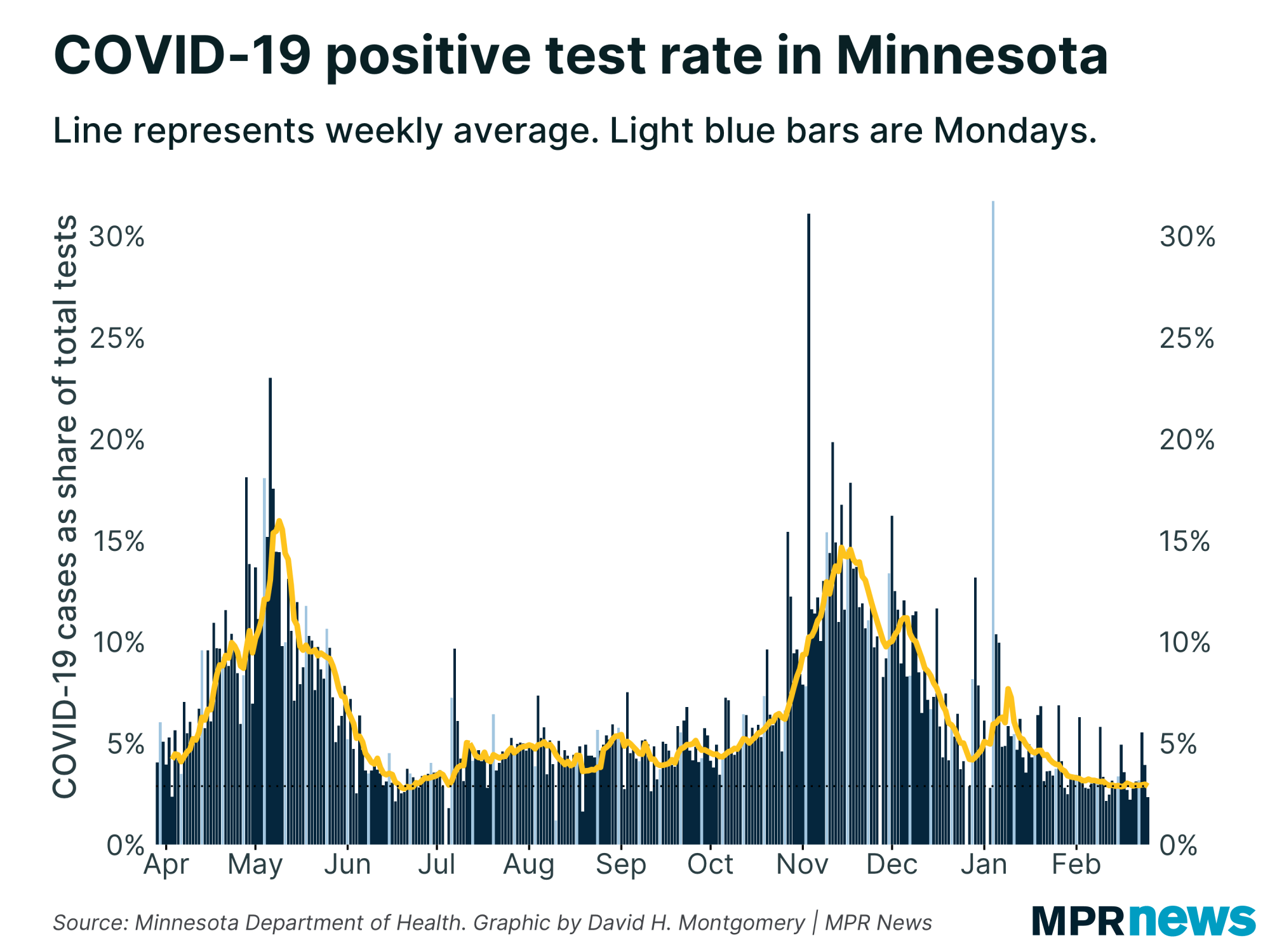 Families can use the state’s testing at home program, go to a community testing site or work with their own health provider, Huff said.

“We’re not asking schools or youth organizations to provide this testing,” he added. “This is a recommendation for all youth, in-person, returning to school, youth sports, extracurricular activities.”

Huff noted that the state’s teacher testing shows a very low level of COVID-19 in that population to date. Huff said some 72,000 educators have been tested with only a .35 percent positive test rate. Officials find a 5 percent rate as cause for concern.

Walz on Thursday said 88 percent of the state’s public school districts and charter schools are offering some in-person learning now.

The owners and operators of darts, pool tables and other games in hundreds of bars are joining the legal challenge to COVID-19 restrictions.

The Minnesota Operators of Music and Amusement Association said Thursday that it was filling a lawsuit in Ramsey County, asking a judge to roll back an 11 p.m. curfew and capacity limits at bars, bowling alleys and other hospitality businesses.

Dan Lieberman, president of American Amusements, one of 25 companies that are part of the association, said they have about 700 employees, and have been very hard hit by COVID-19 restrictions.

“This is not a political issue,” Lieberman said. “It's a business issue. filing a lawsuit was a last resort. Our member businesses have been closed for five in the last 12 months with very little revenue coming in for almost half a year.”

Bars and restaurants, youth sports and mask mandate opponents have previously brought legal challenges to COVID-19 restrictions, none of which have succeeded in Minnesota.

Students who want to continue distance learning will be able to do so if they choose.

The school district’s open date will come more than a month after the date Gov. Tim Walz told public schools they needed to begin offering in-person learning for older students.

The Minnesota Senate passed legislation Thursday to allow businesses to fully reopen amid the COVID-19 pandemic if they have a plan for operating safely.

The bill is aimed at helping bars, restaurants and other businesses that were forced to close or scale back operations under emergency orders issued by DFL Gov. Tim Walz.

The bill also requires legislative approval of any future emergency order closures.
The vote was 38-29, with some Democrats joining all Republicans. A companion bill was just introduced Thursday in the DFL House.

Several Senate Democrats spoke against the bill. Sen. Jennifer McEwen, DFL-Duluth, was among those who raised concerns about the safety of workers.

“If we’re going to be giving the green light to businesses to reopen and to require their employees to appear in person, we are in effect making those workers front-line workers,” McEwen said.

In the House, Republicans pushed for an immediate vote on a bill to provide a concrete timeline for expanding capacity at restaurants, theaters, event centers and other restricted businesses. The attempt was withdrawn after it was clear it would fail.

“Our event centers can’t make it much longer,” said Rep. Dave Baker, R-Willmar. “And the longer we wait, the worse it is, the deeper the hole, the more weddings leave the state of Minnesota or go down the road to the bar. It isn’t working any longer.”

A committee planned to discuss the proposal on Friday.

Biden marks 50M vaccine doses in first 5 weeks in office: On Thursday, President Joe Biden marked the administration of the 50 millionth dose of COVID-19 vaccine since his swearing-in. The moment came days after the nation reached the devastating milestone of 500,000 coronavirus deaths and ahead of a meeting with the nation's governors on plans to speed the distribution even further.

Businesses that tapped pandemic loan program now find it may cost them: Unless the Legislature steps in, thousands of Minnesota businesses might owe taxes on the federal loans they used to keep employees on the payroll during the pandemic.

To see the original reports and more CVOID-19 reporting, follow this link to the MPR News website.  https://www.mprnews.org/story/2021/02/26/latest-on-covid19-in-mn