Why do smoke alarms keep going off even when there’s no smoke? The most likely reason smoke detectors go off unexpectedly is that people aren’t changing the batteries in them often enough. In most sensors you might think of, the strength of the signal goes up when they detect what they’re supposed to. But most smoke detectors are instead designed to go off when their electrical current goes down. That’s because smoke in the air will reduce the current. If your battery is dying, the current that’s flowing through your sensor also goes down. And so you can get a false positive. 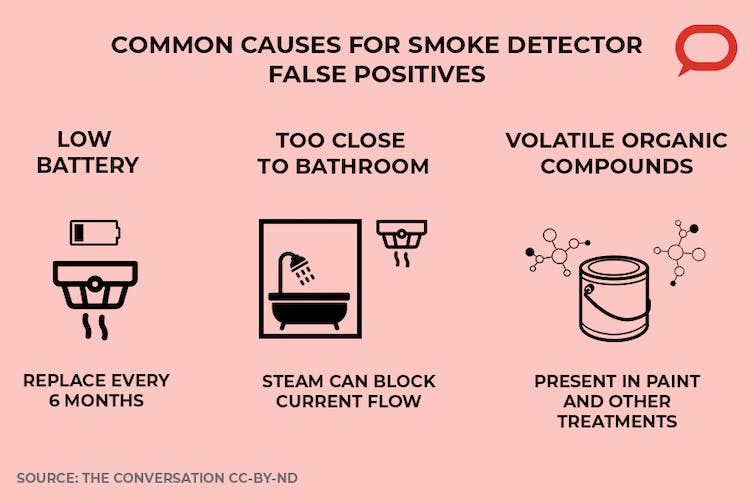 People often change the battery when they move into the house and then never touch it after that. The battery is supposed to be changed at least once every six months or so, but most of us don’t. It’s only when the smoke alarm goes off, you check it, you make sure you’re not dead, and maybe then change it.

The second most common cause of false positives is having your smoke detector too close to your bathroom. If you take a hot shower, the steam from the hot shower can, in some cases, cause false positives. The steam from the shower can block the flow of the current, just as smoke does. Anything that’s sort of heavy in air can cause that to happen. You want the smoke detector to be near the kitchen, because often when you cook, smoke happens. So, open the window if you don’t want it to just go off randomly.

Get facts about the coronavirus pandemic and the latest research

Another common cause is the volatile organic compounds in paints or other chemical treatments in the house. It’s the stuff that keeps your paint wet but also lets it dry once it’s on the wall. Some of them can set off these alarms as well. It just depends on how the sensor is tuned.

Most new sensors are pretty well tuned. They weren’t nearly as good in terms of the sensitivity even 10 years ago.

How do smoke detectors work? 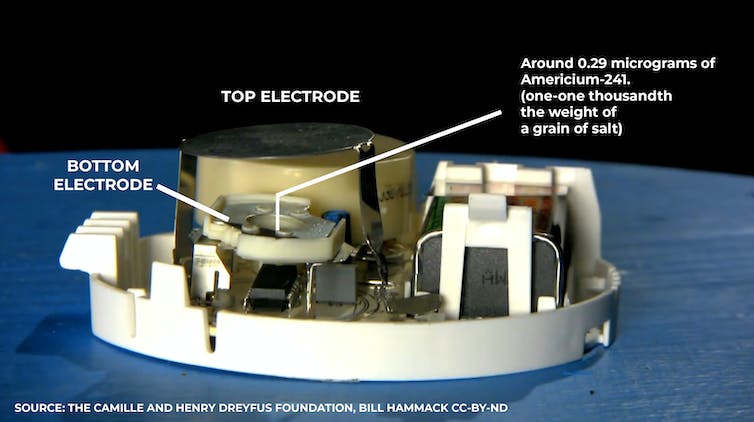 Inside a smoke detector. The Camille and Henry Dreyfus Foundation, CC BY-NC-ND

Inside your smoke detector, there’s a small Americium-241 radiation source that’s a byproduct of nuclear fuel. It emits alpha particles, which you can think of as little bullets. These little bullets come out of the source and hit air molecules to break them apart.

When that happens, some broken pieces will be positively charged, and others will be negatively charged. And those two oppositely charged ones will be attracted to the negative and positive battery terminals in the smoke detector’s battery. This movement of charged particles is what we call electrical current.

Alpha particles from the radiation source strike air molecules, which causes them to eject ions, creating a current.

If smoke is coming into the area where this breaking apart is happening, it will block the charged particles from moving, reducing the current. So, that lowered current is what your sensor interprets as, hey, there’s smoke here.

Smoke particles block the ions, stopping or reducing the flow of current, which sets off the alarm.

Is there a better smoke detector?

A newer kind of smoke detector is based on the photoelectric effect. It’s what Albert Einstein got the Nobel Prize for. When light hits something, it generates electric current – it’s very much like a mini solar cell. Engineers figured out how to tune a light source in a way that is sensitive to smoke.

The light can be shining and you get current. But when smoke goes in, it will make the light scatter a different way, or block the light in a certain way, and that will change the amount of current that’s flowing.

If it is tuned correctly, you can interpret that change in current as the presence of smoke. And again, you can get false positives because organic compounds often absorb infrared light really well. It’s similar to the Americium-241 smoke detectors in some ways. The photoelectric ones probably are more power intensive. So your battery life span may not be as good. But, hey, you should be changing it every six months anyway.

To read the original report and see more science reporting, follow this link to The Conversation website.  https://theconversation.com/why-do-smoke-alarms-keep-going-off-even-when-theres-no-smoke-152526