Latest on COVID-19 in MN: 'A dangerous point in this pandemic' Dangerous. Dire. Horrific. Those were just a few of the adjectives state officials used Wednesday to describe Minnesota’s rapidly worsening position in the pandemic.

Gov. Tim Walz is hoping now that four weeks of restrictions on social gatherings and night life will ease the spike in COVID-19 caseloads, hospitalizations and deaths that are threatening now to overwhelm the state’s health care system.

“We’re at a dangerous point in this pandemic,” Walz told Minnesotans as he announced the new curb. “How we act, and how this virus moves, will have huge implications on the number of people who will be hospitalized and, ultimately, those who will lose their lives.”

Earlier in the day, the state Health Department’s latest data showed the virus cutting across all of Minnesota.

Hospitalizations continue to climb steeply, with the seven-day new admissions trend hitting a record. About 1,700 people are in Minnesota hospitals now because of COVID-19 with 355 needing intensive care, according to the latest update. The numbers have leaped since Nov. 1. 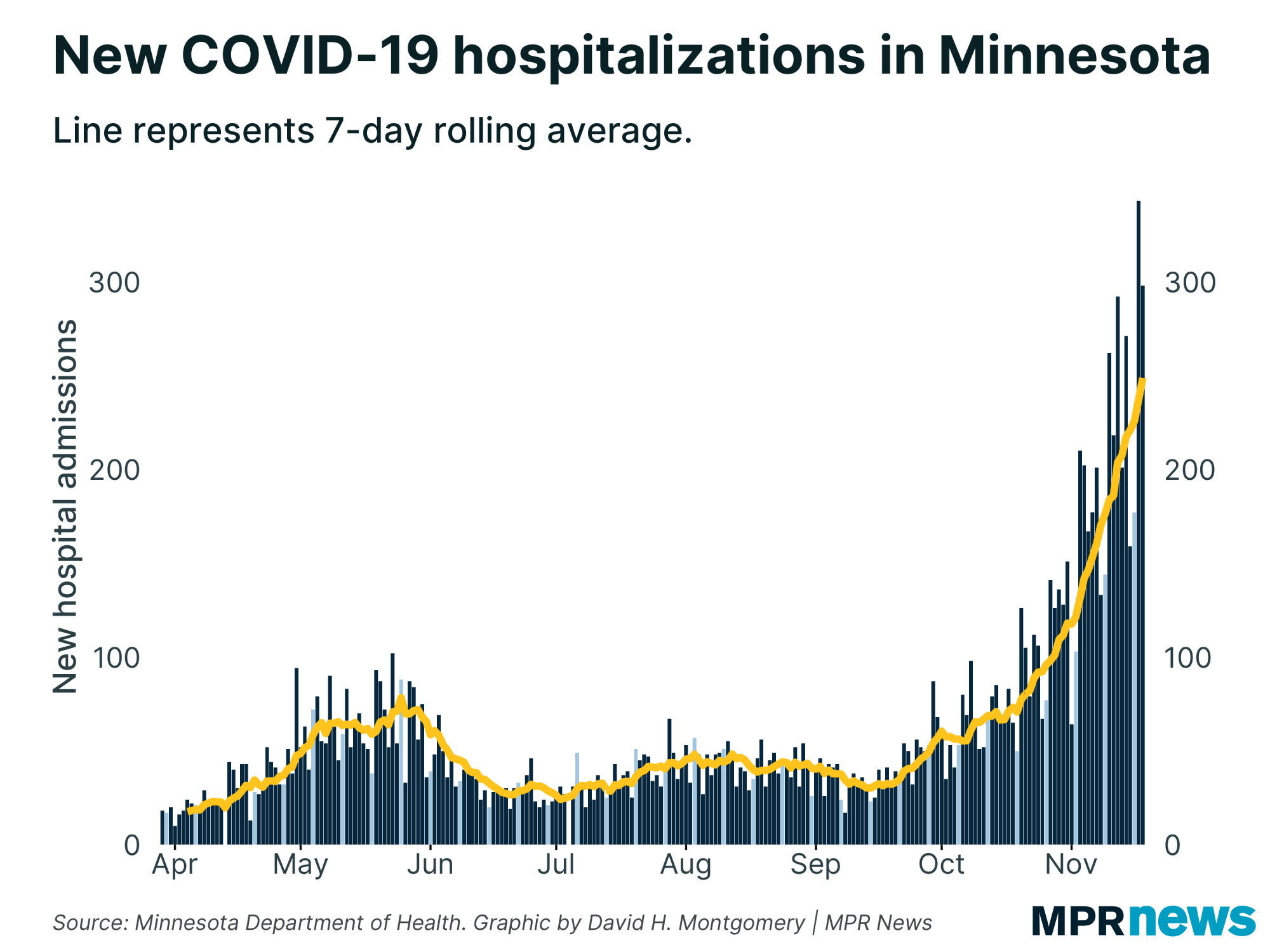 Overall, the numbers continue to paint a disturbing picture of a rapidly worsening outbreak in Minnesota not limited to just one region or demographic group, like earlier in the pandemic.

Death counts are averaging 35 a day the past seven days, twice as high as two weeks ago.

The deaths reported Wednesday raised Minnesota’s toll to 3,010. Among those who’ve died, about 69 percent had been living in long-term care or assisted living facilities; most had underlying health problems. 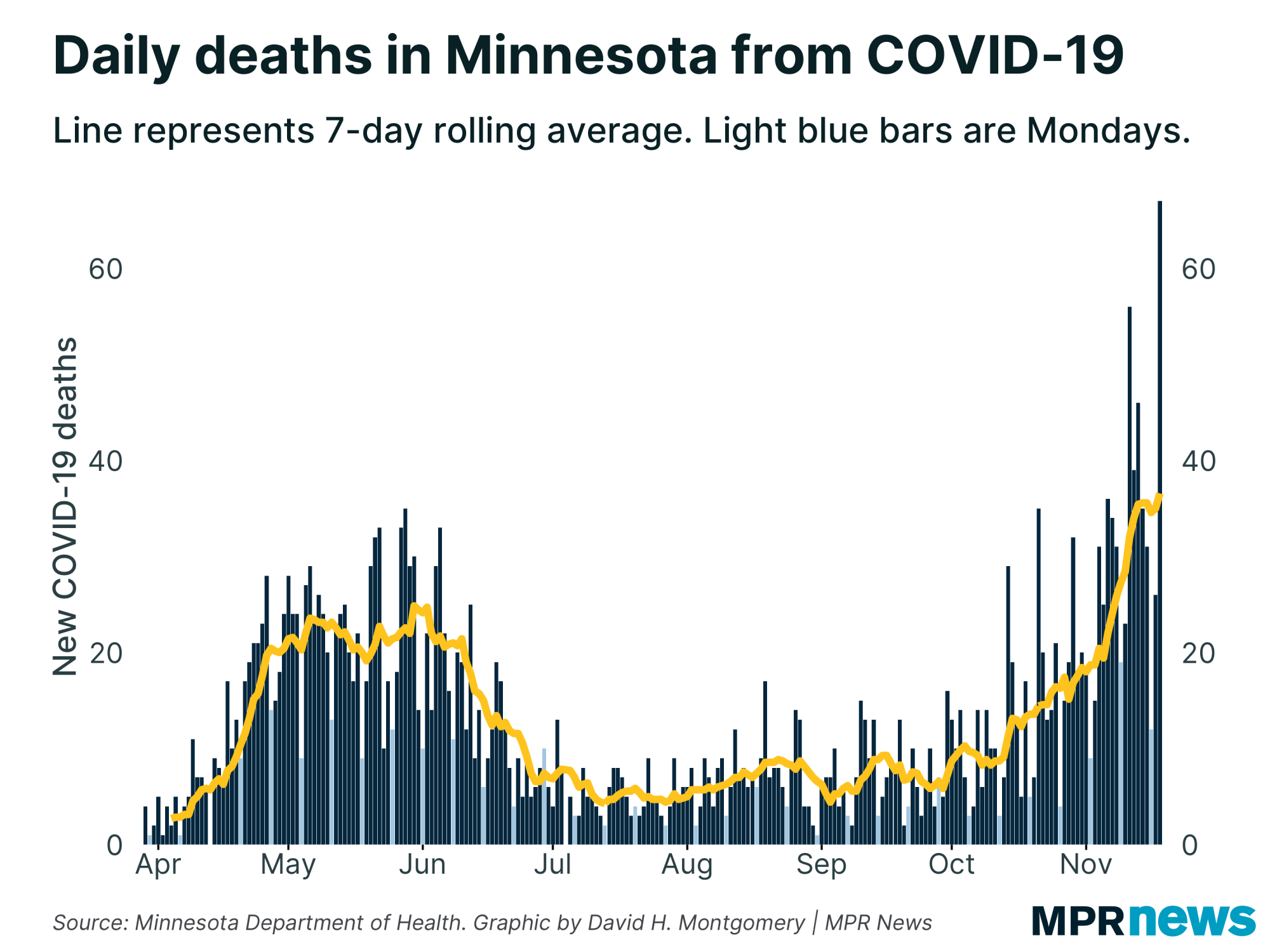 New cases have been spiking the past two weeks in all age groups.

People in their 20s still make up the age bracket with the state’s largest number of confirmed cases — nearly 50,000 since the pandemic began, including more than 27,000 among people ages 20-24. 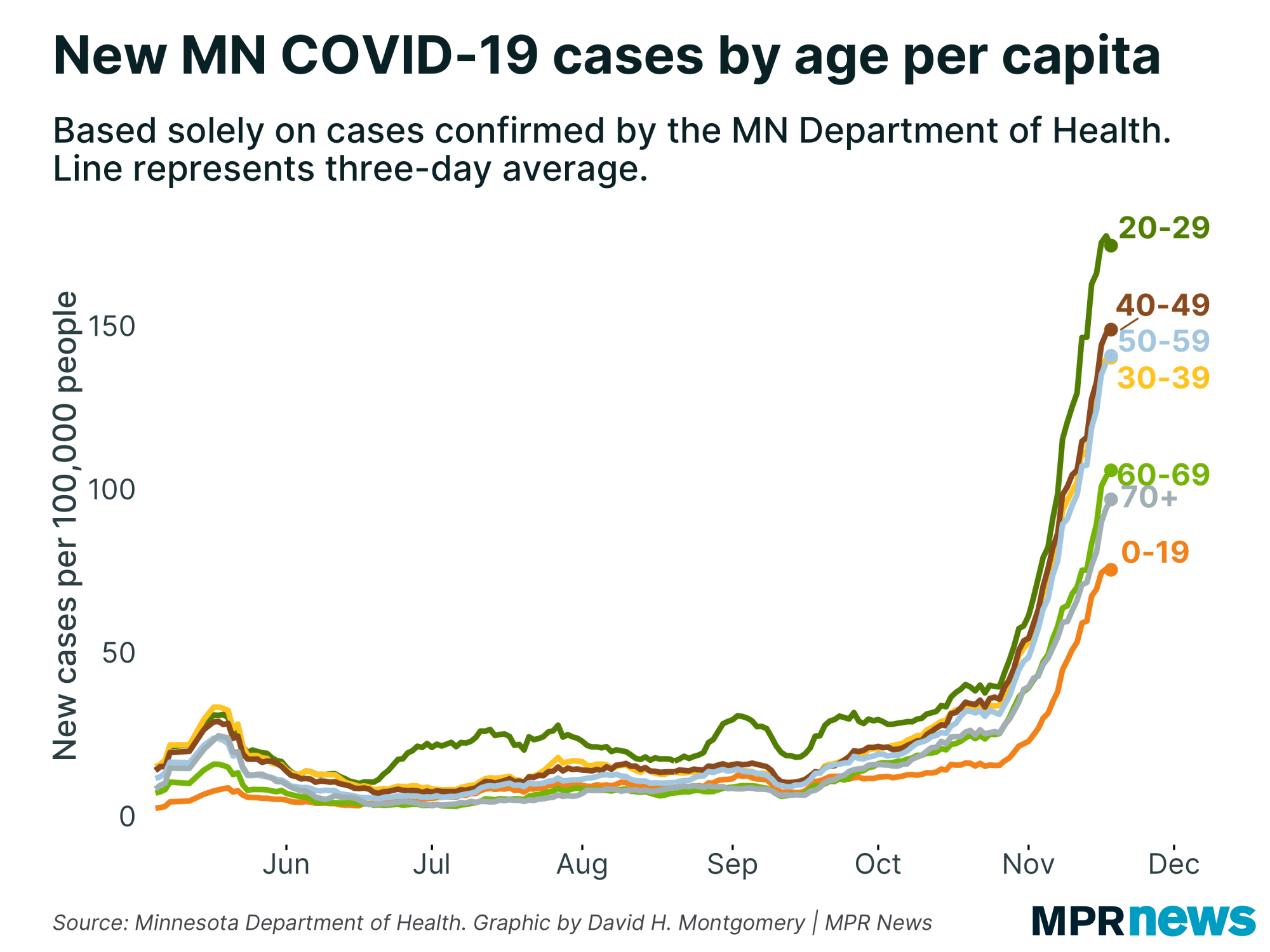 The number of high school-age children confirmed with the disease has also grown, with more than 19,000 total cases among children ages 15 to 19 since the pandemic began.

The numbers help explain why experts remain particularly concerned about teens and young adults as spreaders of the virus.

Although less likely to feel the worst effects of the disease and end up hospitalized, experts worry youth and young adults will spread it to grandparents and other vulnerable populations. 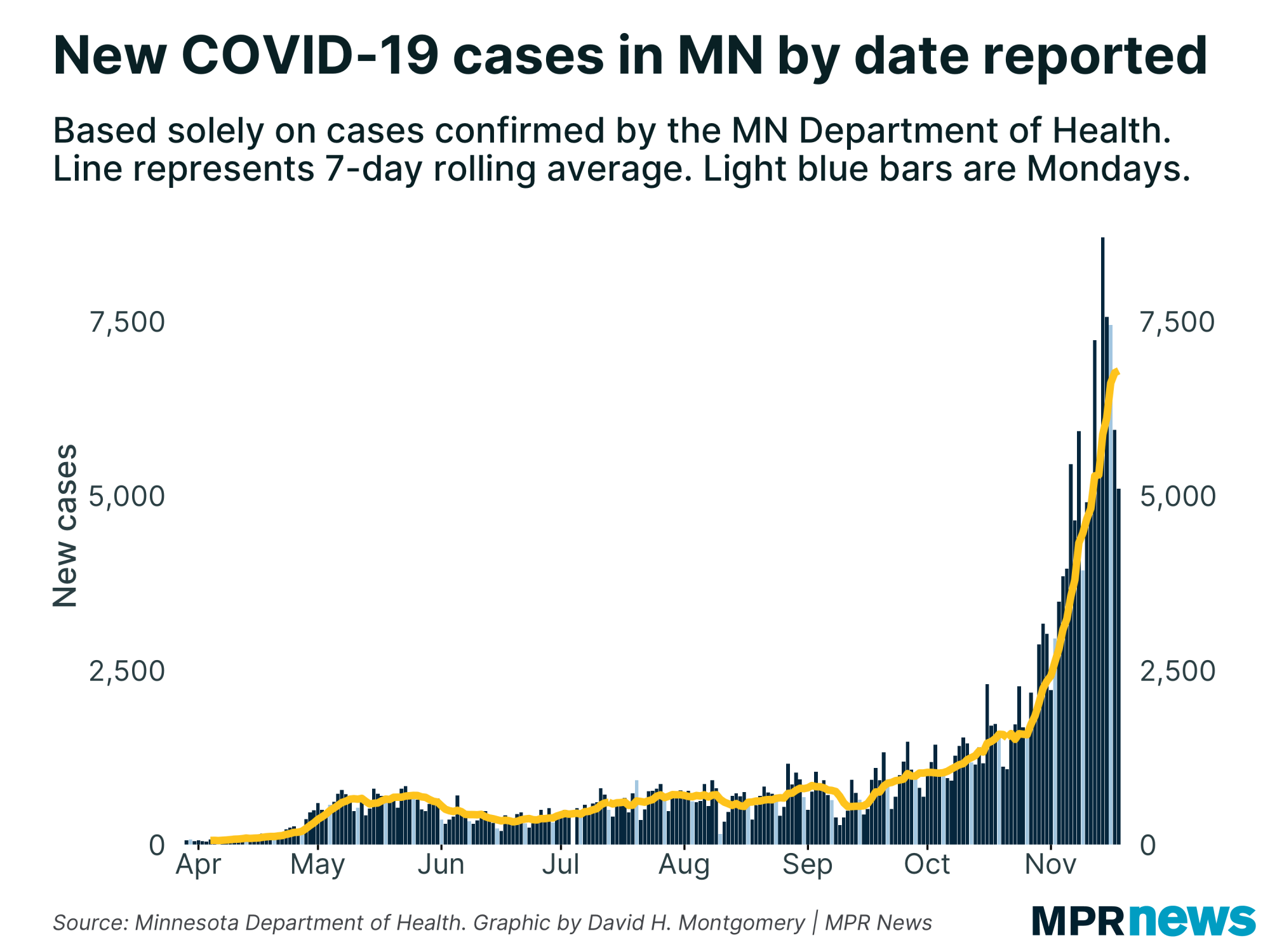 It’s especially concerning because people can have the coronavirus and spread COVID-19 when they don’t have symptoms.

Walz said recently the state has data showing infection rates rising around bar and restaurant activity after 9 p.m. among young adults, noting that people who have the virus but don’t have symptoms are unwittingly spreading it.

The numbers led him to order new restrictions on late-night social life in Minnesota, including a 10 p.m. curfew for indoor service in bars and restaurants, a move that’s expected to be followed up today by a one-month ban on in-person bar and restaurant service.

Regionally, central and northern Minnesota have driven much of the recent increase in new cases while Hennepin and Ramsey counties show some of the slowest case growth in the state. 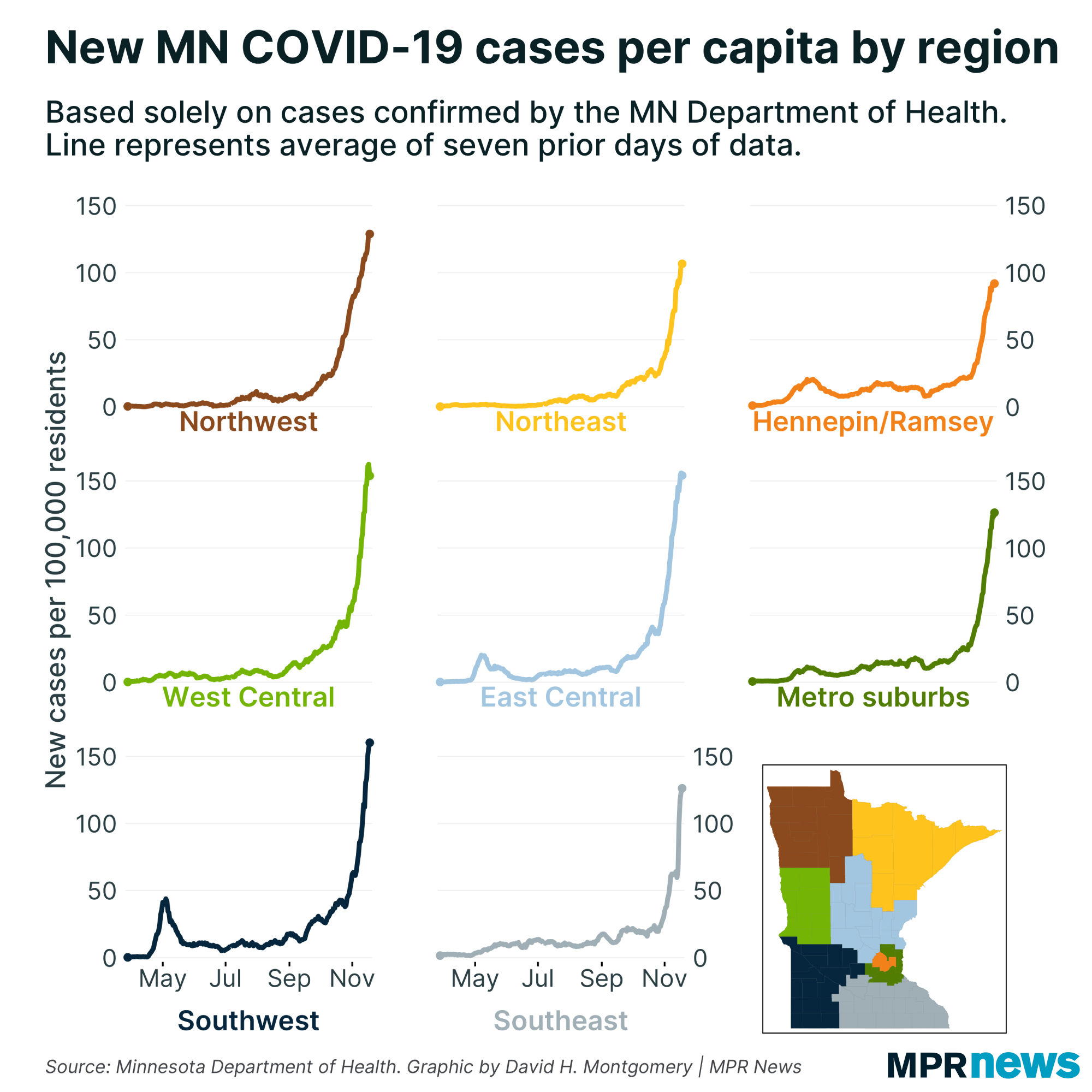 The fastest growing outbreaks are along the state’s western border with the Dakotas, where the virus is spreading unchecked. But new cases are rising at accelerating rates everywhere in Minnesota.

Collectively, rural areas continue to report the most new COVID-19 cases per capita. Northern Minnesota, once the region least affected by the disease, has also seen its caseload grow dramatically in recent weeks. 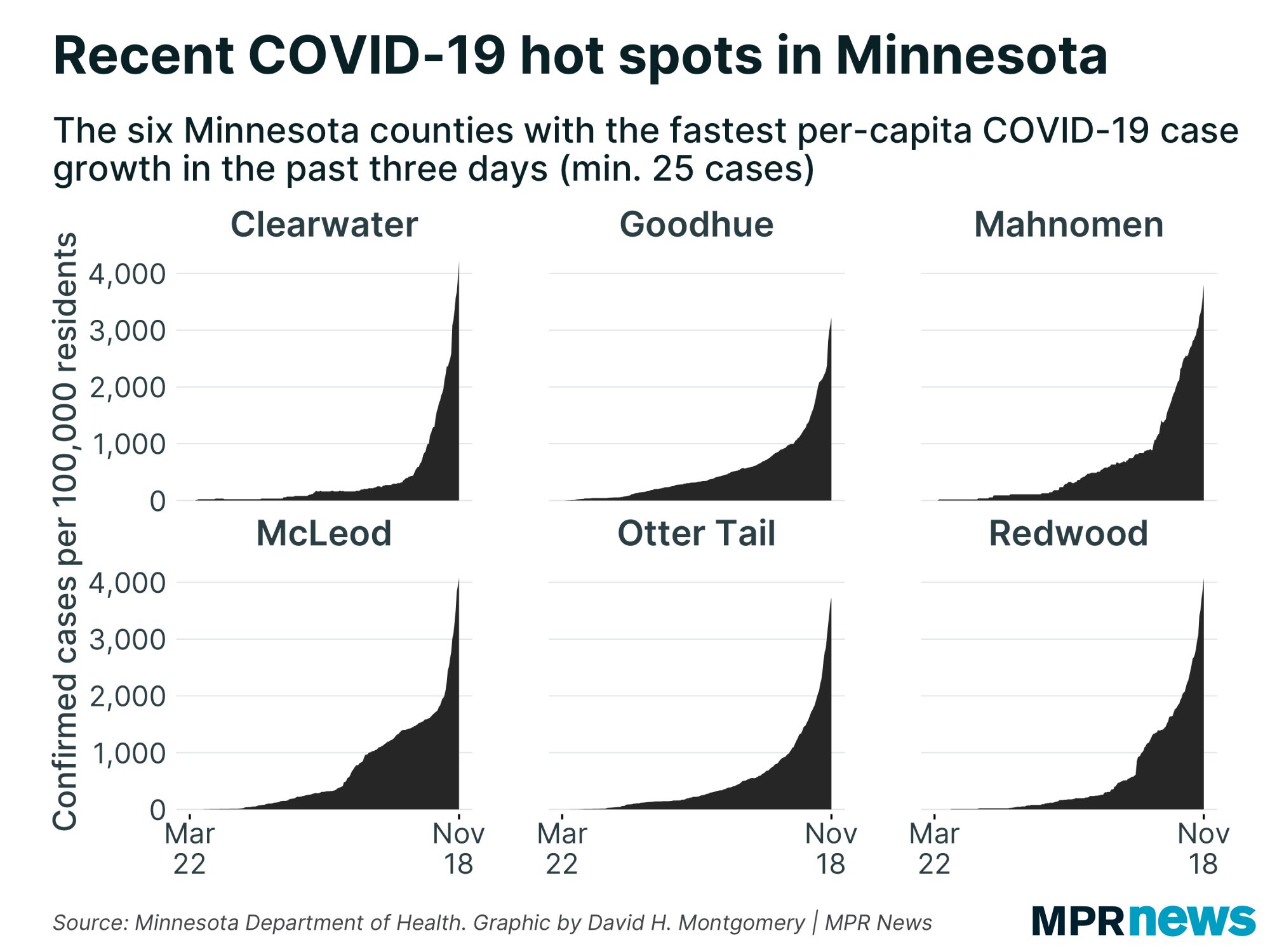 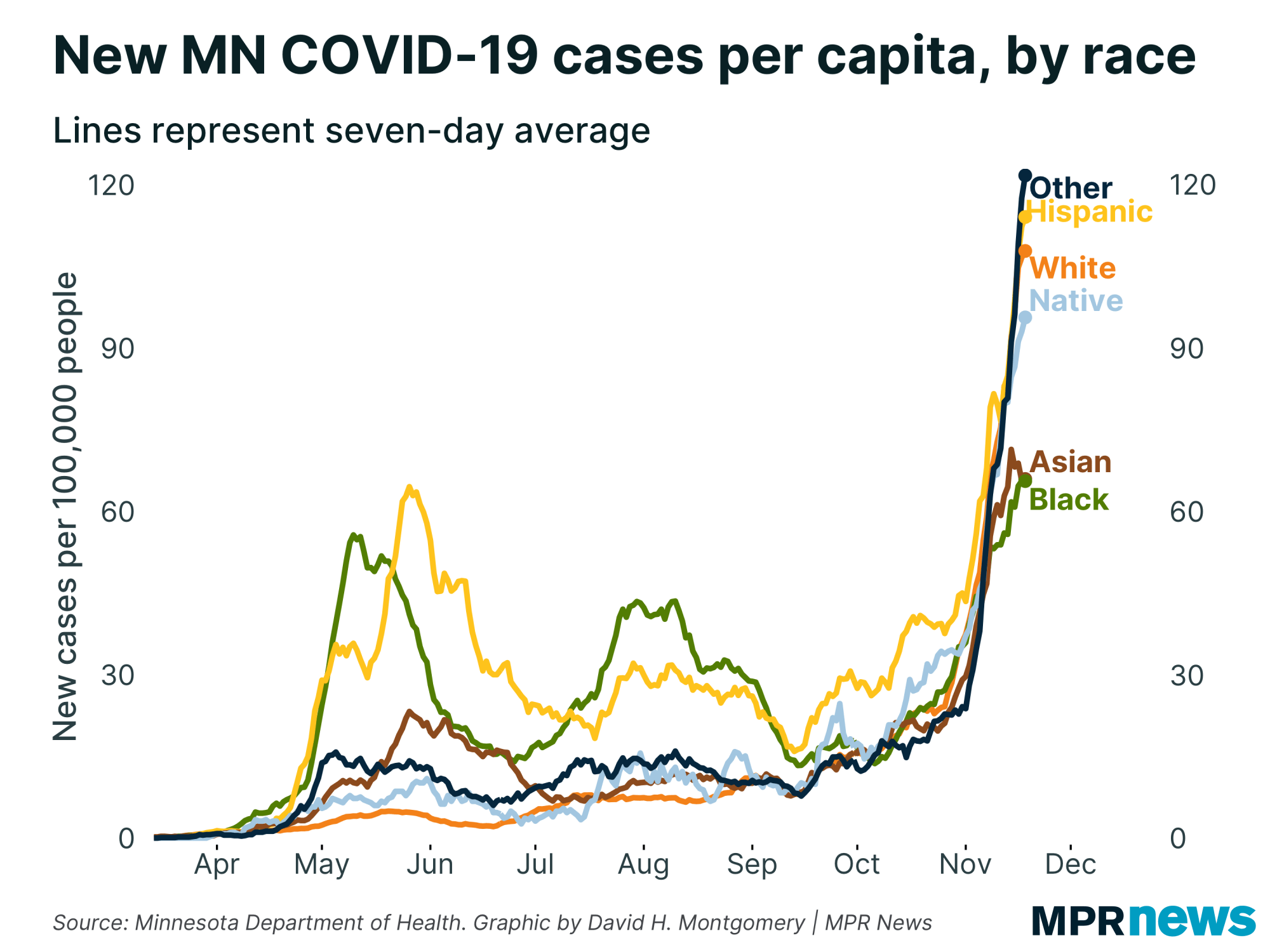 Cases among all races and ethnicities continue to rise, although currently the growth is slowest among Black Minnesotans, who reported the most new COVID-19 cases per capita for much of the spring and summer.

‘The ground is really shifting’

State officials on Monday pleaded with Minnesotans not to gather for Thanksgiving outside their immediate household. They also asked college students to consider not going home for the holiday.

That advice was a change from the state Health Department’s prior recommendations. The agency last week said it’d be OK for people to have gatherings up to 10 from three households. 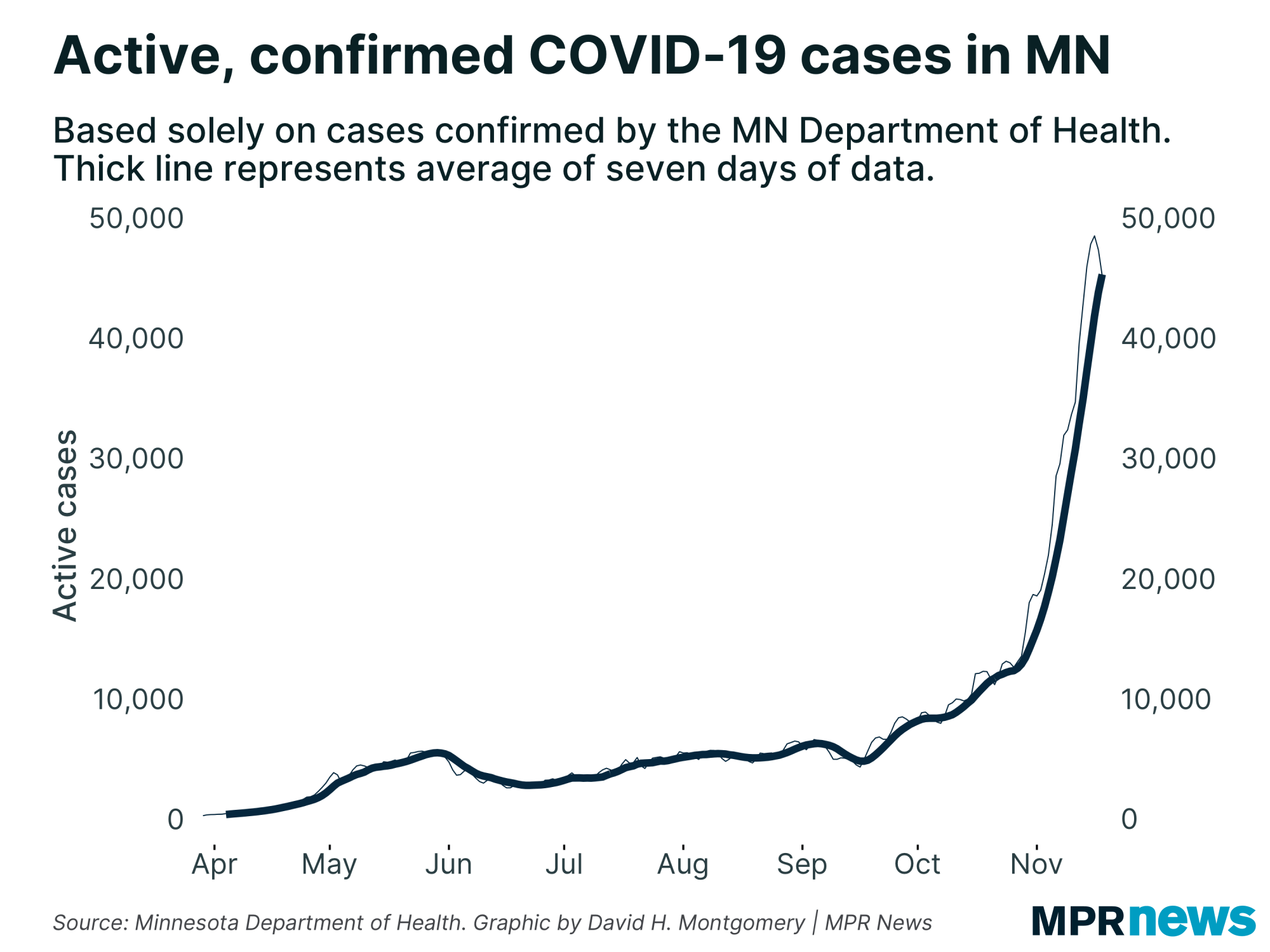 “The ground is really shifting under our feet and we need to adapt quickly,” she said.

‘Darkest part of the pandemic’

Malcolm, Walz and other officials have pleaded with Minnesotans over the past month to take personal responsibility to reduce the disease’s spread by wearing masks in social gathering places, socially distancing and staying home if you don’t feel well.

The uncontrolled spread is being driven now by Minnesotans’ informal gatherings and get-togethers with family and friends where it’s transmitted unknowingly by people who have the virus but do not have symptoms, officials say.

“Our behavior is driving this … literally thousands and thousands of small decisions happening around Minnesota that are the issue here,” Malcolm said recently. 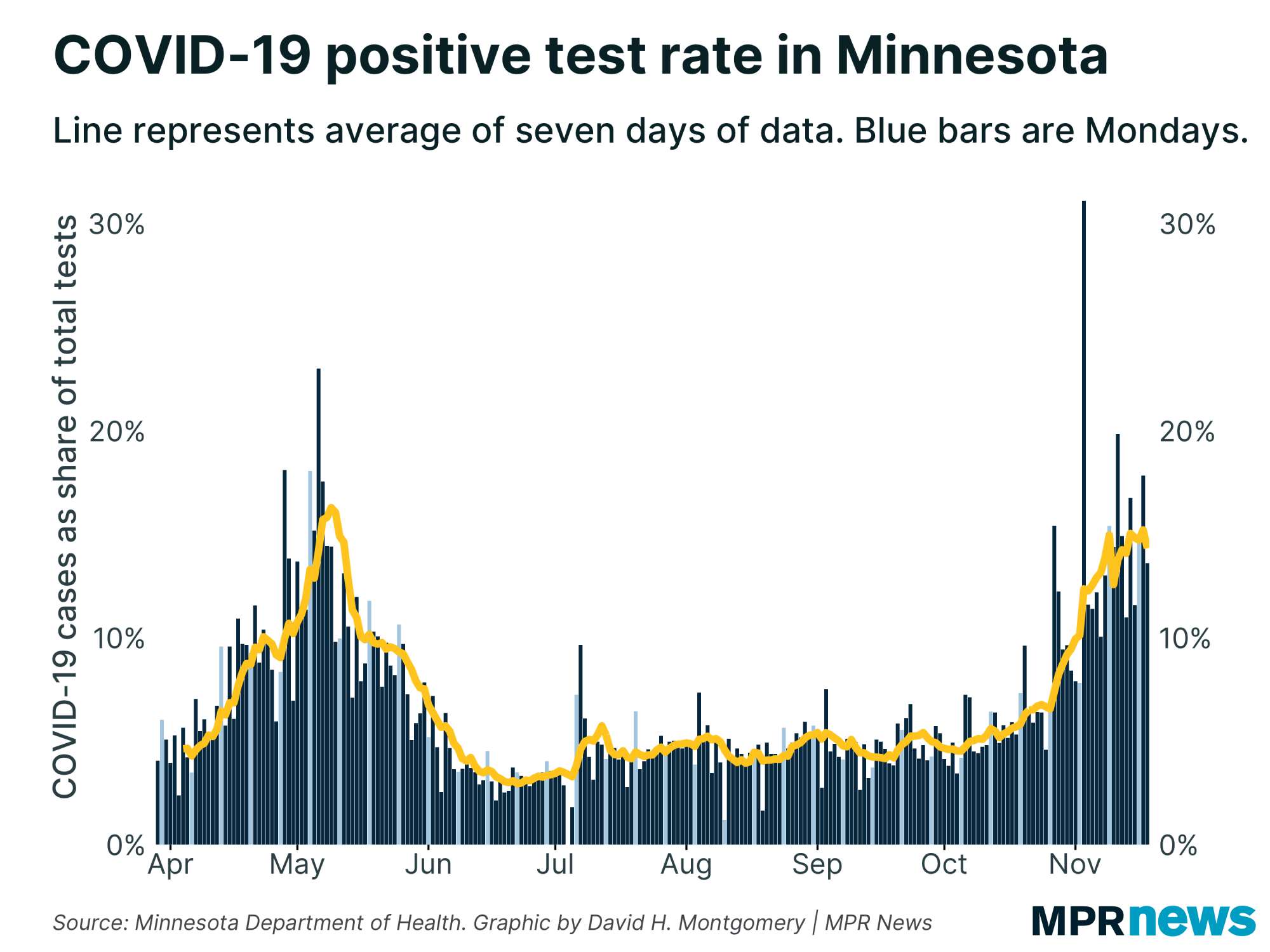 There’s increasing concern about the ability of hospitals to handle more. Staffing is becoming a challenge as more health care workers get sick.

COVID-19 is taking a toll on hospital staffing, making care more difficult to provide, even as demand grows. The trends indicate the situation will get much worse in the near future Malcolm told MPR News early Monday. 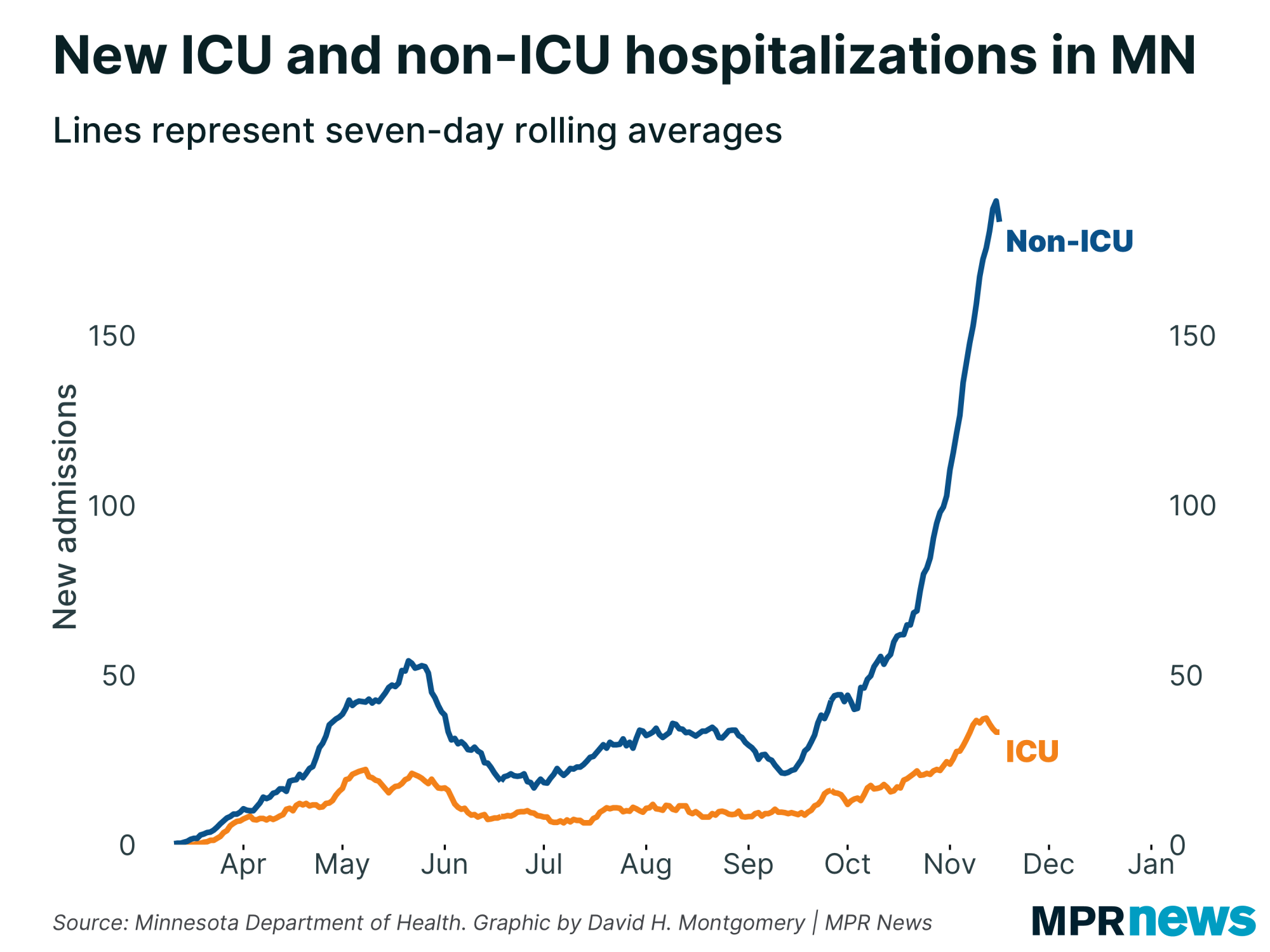 Tuesday’s briefing with Walz included a number of Minnesotans directly affected by the pain of COVID-19. Among them was ex-GOP state Rep. Nick Zerwas, who ended up hospitalized in an ICU with the disease.

"I was stunned when I became so overwhelmed and ill from this virus,” said Zerwas, who also has a severe heart condition. “It happened so quickly and it progressed so fast. Two weeks ago I didn’t know a soul in Sherburne County that tested positive,” he said, adding he now knows dozens.

“At no time will this virus ask you who you voted for or what your politics are,” he said. “It does not discriminate, and it is mean. We all have to come together and fight.”

Zerwas, in a weak and raspy voice, conceded he downplayed COVID-19 before contracting it back in the summer but that circumstances have changed completely since then. He said the situation in June and July was “nothing, absolutely nothing” like it is now.

“Everything has changed,” he said. “The virus is here. If we don’t act now, God help us.”

At Sanford Health, chief medical officer Doug Griffin says the Fargo, N.D., hospital is averaging 500 patients a day with more than 100 of those being treated for COVID-19. That's four times higher than the COVID-19 caseload last spring.

"We simply have to reduce the need for hospital beds. It will be quite awhile before the vaccine makes an impact because our hospital and the hospitals across the nation really are full. There is nowhere else to go," Griffin said.

The tribal chair of Red Lake Nation says the state is sending help to deal with rising COVID-19 cases on the northern Minnesota reservation.

Darrell Seki said that as of Monday there were 46 people with active COVID-19 cases on the reservation. He said that includes 19 residents and 13 staff at the Jourdain Perpich Extended Care Facility in Red Lake.

"Due the increased number of COVID cases in our area, Gov. Walz will activate National Guard nurses to assist at the nursing home as our registered nurses and CNAs have tested positive," Seki said in an online post.

Seki said it's been impossible to hire additional staff because so many other nursing homes are also dealing with shortages.

"See what happened is they opened it up for visiting for a week. The residents start getting COVID,” he said. “Then all of a sudden our nurses are getting, our director of nursing is one, even our director of the nursing home got COVID."

The governor's office did not respond to a request for information about potential National Guard deployment to tribal nations in Minnesota.

A second Minnesota county has said COVID-19 cases are growing so rapidly that they can’t keep up with standard case investigations.

Olmsted County, including Rochester and its surroundings, has jumped from an average of 67 cases a day at the beginning of November to more than 120 cases a day.

Health officials say they can no longer trace the contacts of everyone with a confirmed case. They’re asking people who test positive to reach out to people they’ve been in close contact with on their own.

Itasca County in northern Minnesota took similar steps last week, and the state of North Dakota did as well, saying the COVID-19 outbreak has outstripped the standard public health measures to fight it.

Patti Cullen, president of Care Providers of Minnesota, said that staff illness is reaching crisis levels in nursing homes, and elderly patients remain as susceptible as ever to the coronavirus.

She said visits shouldn’t even be on the table because of the prevalence of COVID-19 in the community outside care centers.

"Other than virtual visits or outdoor visits, there is no safe way," she said.

Cullen said that it isn’t just a matter of keeping vulnerable residents safe, but keeping care facilities available to take recovering patients from hospitals. She said they need to take patients to free up hospital beds for people who need a higher level of care.

People who have tested positive for COVID-19 or who have been in contact with a positive case will now be notified by text before receiving a phone call from a contract tracer.

The hope is to increase the rate of answered or returned phone calls to contact tracers. The text will include the contact tracer’s number.

“The idea is to more effectively reach and inform those who test positive for COVID-19 and their close contacts about what they need to do to prevent further spread and to better protect the state’s most vulnerable populations through improved outreach and communication,” Health Commissioner Jan Malcolm said Friday.

Walz hits the brakes on Minnesota social life as COVID-19 rages: Gov. Tim Walz on Wednesday rolled out a new COVID-19 order that prohibits all in-person social gatherings with people outside your household for four weeks. It restricts bar and restaurant service to takeout and delivery. Theaters and gyms must close, although retail stores can be open.

Former St. Cloud costume shop owner who 'touched so many lives' remembered for creative spirit: Michael Anderson's costume shop wasn't so much a store as it was an escape into a world of imagination and make-believe.

Gazelka says Senate GOP could've handled COVID-19 differently: Minnesota’s Senate majority leader said Tuesday that his caucus could’ve handled news of positive COVID-19 cases among Republican senators differently, after criticism from Democrats that included a call for him to resign from his leadership post and demands for full transparency.

Minn. officials have adjusted their guidance around Thanksgiving. Here’s what you need to know: State health officials joined Gov. Tim Walz Monday to plead with Minnesotans to stay home — especially on Thanksgiving. It was an about-face from health officials’ guidance the previous week, in which they urged scaling back and include only a limited number of households.