Minnesota Gov. Tim Walz speaks from the Governor's Reception room at the State Capitol, to discuss the latest steps in his response to COVID-19, Wednesday in St. Paul, Minn.
Glen Stubbe | Star Tribune via AP, Pool

Gov. Tim Walz on Wednesday rolled out a new COVID-19 order that prohibits all in-person social gatherings with people outside your household for four weeks. It restricts bar and restaurant service to takeout and delivery. Theaters and gyms must close, although retail stores can be open.

Organized sports for youth and adults are on hold. Collegiate athletics and professional sports can continue but with new spectator limits. Places of worship and child care can stay open with the proper precautions in place.

“We’re at a dangerous point in this pandemic,” Walz told Minnesotans in his address announcing the new restrictions. “How we act, and how this virus moves, will have huge implications on the number of people who will be hospitalized and, ultimately, those who will lose their lives.”

He warned the virus was spreading exponentially now across the state, putting immense pressure on health care workers and hospitals dealing with a surge of admissions tied to COVID-19. Officials say hospital admissions have risen 80 percent the past two weeks.

He expressed hope that these new curbs would save lives until a vaccine was widely available, and that the process of vaccinating people might begin before the latest restrictions ended, but acknowledged that wouldn’t make the next few weeks any easier.

Among the most painful changes: Weddings, funerals, and other similar celebrations can be held with the current rules in place, but all receptions and gatherings connected to these ceremonies must be canceled or postponed, according to the order.

Schools will continue to operate under the current guidance, which allows district to shift between in-person, distance, and hybrid learning depending on the local conditions of the virus.

The new restrictions are set to kick in at the close of business Friday, so the dine-in prohibition would start Saturday. Gym closures would kick in midnight Friday.

The order and its restrictions will end on Dec. 18.

Walz and state public health leaders said they understood the pain the new curbs would cause but that the pandemic’s alarming trajectory demanded a response.

The state was running about 2,400 new cases daily on average at the start of November. The most recent trend line has the state averaging nearly 7,000 new cases daily, a massive leap in the last two weeks.

The tough new curbs come as Minnesota struggles to get control of a rapidly worsening outbreak not limited to just one region or demographic group, like earlier in the pandemic.

Caseloads, hospitalizations and deaths are climbing largely unabated. The Health Department on Wednesday said 67 more Minnesotans had died, a single-day record that pushed the state’s pandemic death toll above 3,000.

Officials believe many of the current outbreaks are being fueled now by the kinds of informal get-togethers with friends and family that multiply during the November and December holidays. 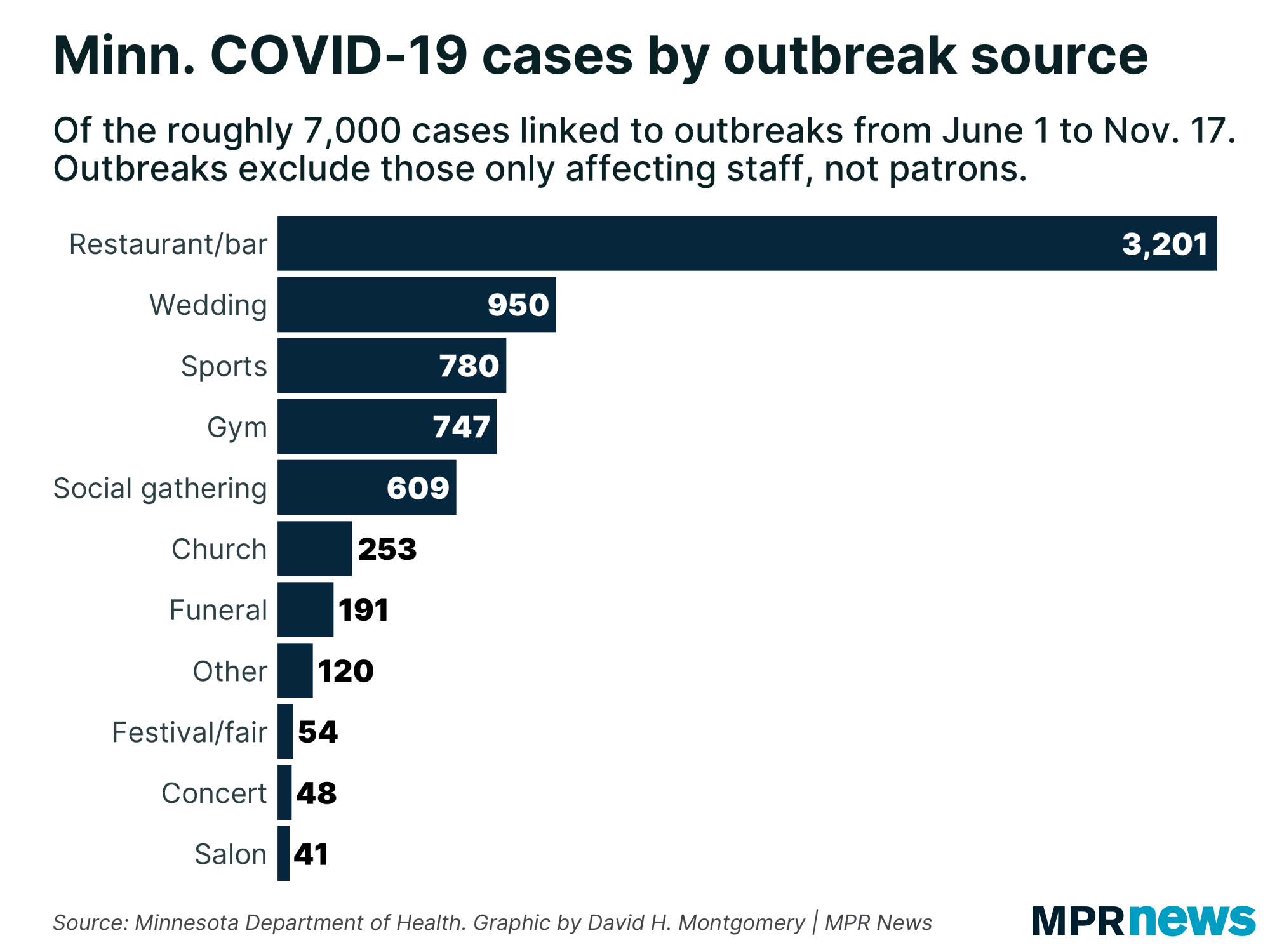 Still, news of the new restrictions fell hard on the state’s restaurant, bar and hospitality business, which was still reeling from restrictions earlier in the pandemic.

Hours before the announcement, though, leaders of the state's hospitality industry were already pushing back, warning many bars and eateries won’t survive the monthlong restrictions.

“Today’s action will push many small restaurants, food service and other hospitality businesses over the cliff," Liz Rammer, CEO of the trade group Hospitality Minnesota, said in a statement.

She called on Minnesota to provide immediate financial aid "or these businesses will not be here in four weeks."

State officials said later that they were preparing to meet an expected surge in unemployment needs but noted that much of the federal aid that eased the pain earlier in the pandemic was either not available now or expiring at the end of the year. Walz called on Congress to act quickly to provide more aid.

In March, Walz imposed restrictions limiting bars and restaurants to takeout only in the state’s initial efforts at flattening the coronavirus curve, then gradually loosened restrictions as the summer wore on.

But in the spring, workers whose jobs were eliminated or furloughed were able to receive $600 in relief from the federal CARES Act, the economic stimulus bill enacted in March. Since then, that relief has expired, and this time around, impacts on the hospitality industry could be more financially painful.

Walz acknowledged that the “pause” in youth sports would be especially hard for kids and families.

Hours before the announcement, Paynesville football coach and activities director Max Meagher said he and his staff have tried to prepare athletes to end their seasons — and in some cases their final weeks of high school sports.

“We talked about that a little bit yesterday at practice already. And the message to them was that, you know, that we as a coaching staff, we love them. We appreciate everything that they put forward,” Meagher said. “We recognize that they were in a difficult position this year, asked to sacrifice and to do things obviously for the good of, you know, all of society."

To read the original report and see related stories, follow this link to the MPR News website.  https://www.mprnews.org/story/2020/11/18/walz-announces-new-measures-to-curb-covid19