Latest on COVID-19 in MN: Record-breaking, but not in a good way When you’re a public health official in the middle of a pandemic, the last word you want to hear is “record.” But it’s come up often this week as Minnesota’s COVID-19 numbers continue to head in the wrong direction.

The Health Department on Thursday reported 20 more deaths atop 35 deaths the prior day, the largest two-day rise since late May.

State officials expected that late summer and early fall gatherings, sporting events and informal meetups among Minnesotans would deliver a surge of cases in October. They also anticipated the wave would put more people in the hospital — and lead to more deaths.

Minnesota Health Commissioner Jan Malcolm on Wednesday called the recent data sad but not surprising, and she warned Minnesota to brace itself for more cases, hospitalizations and deaths unless more people take personal responsibility to stem the disease’s spread. 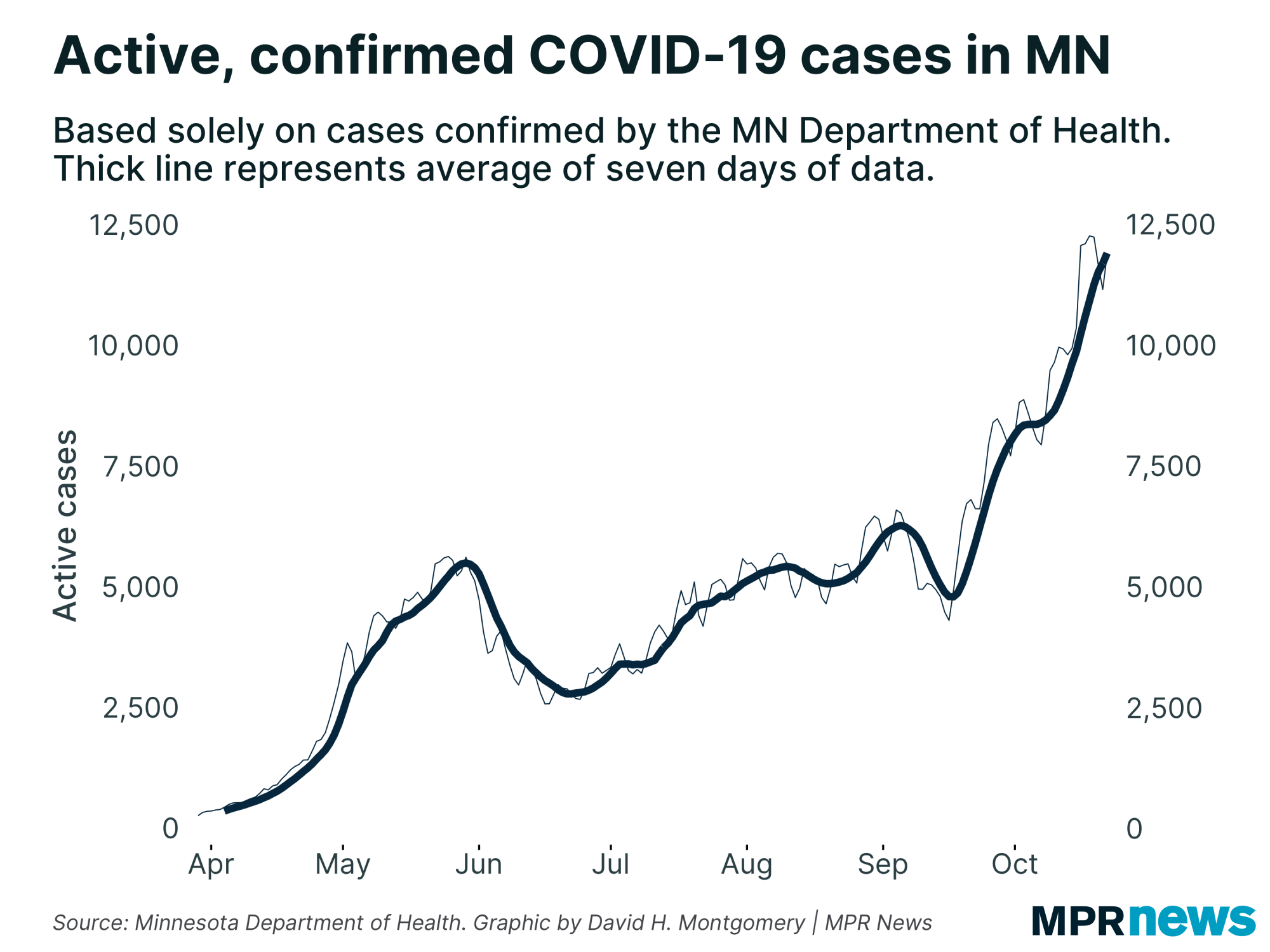 “We do need to understand that more cases are going to lead to more people with serious disease, potentially with long-term complications we are only beginning to understand,” she said. 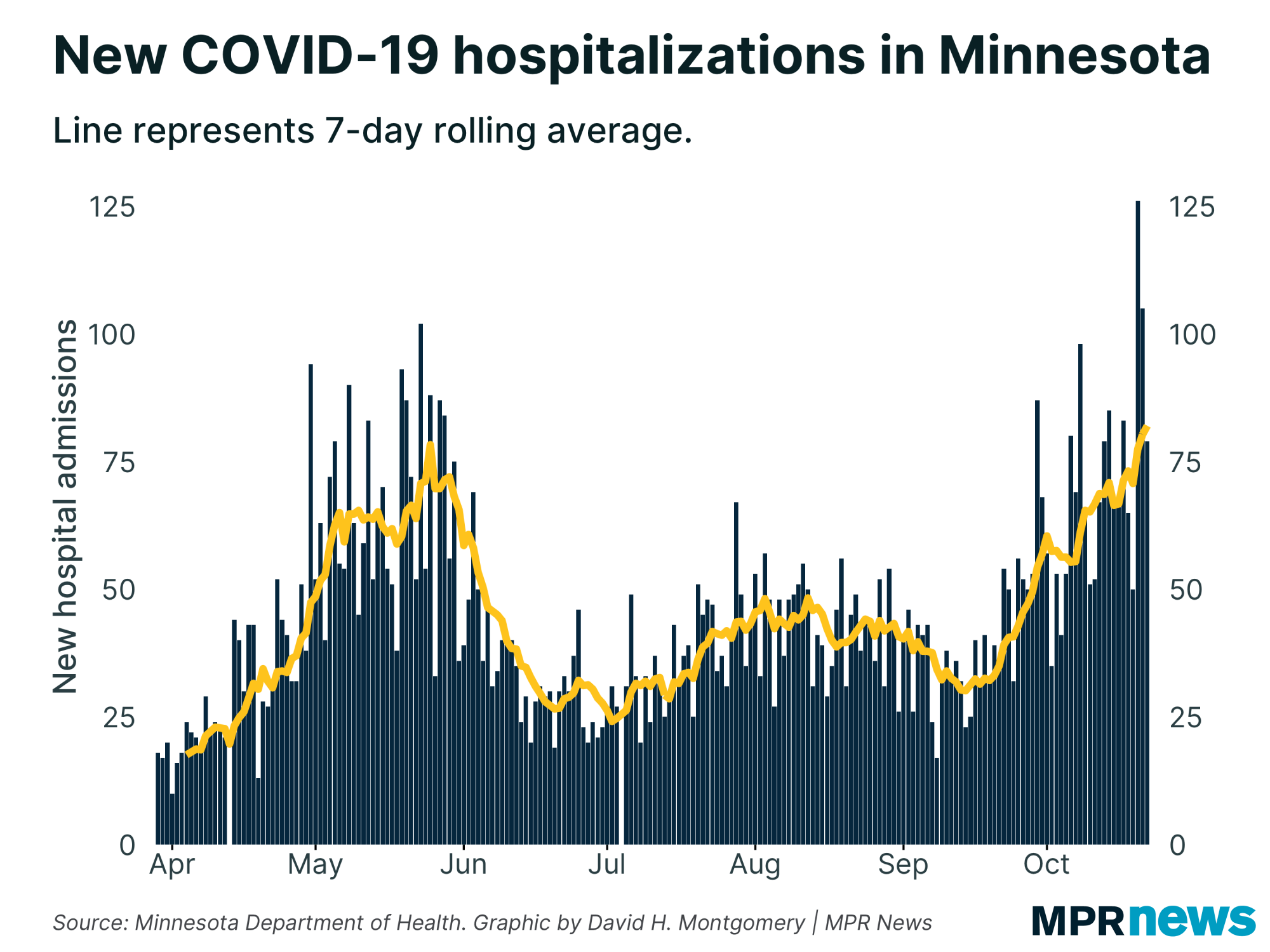 Health authorities remain concerned that Minnesotans, fatigued by more than seven months of trying to stay vigilant against the virus, are letting their guard down in private settings, even as the virus spreads. 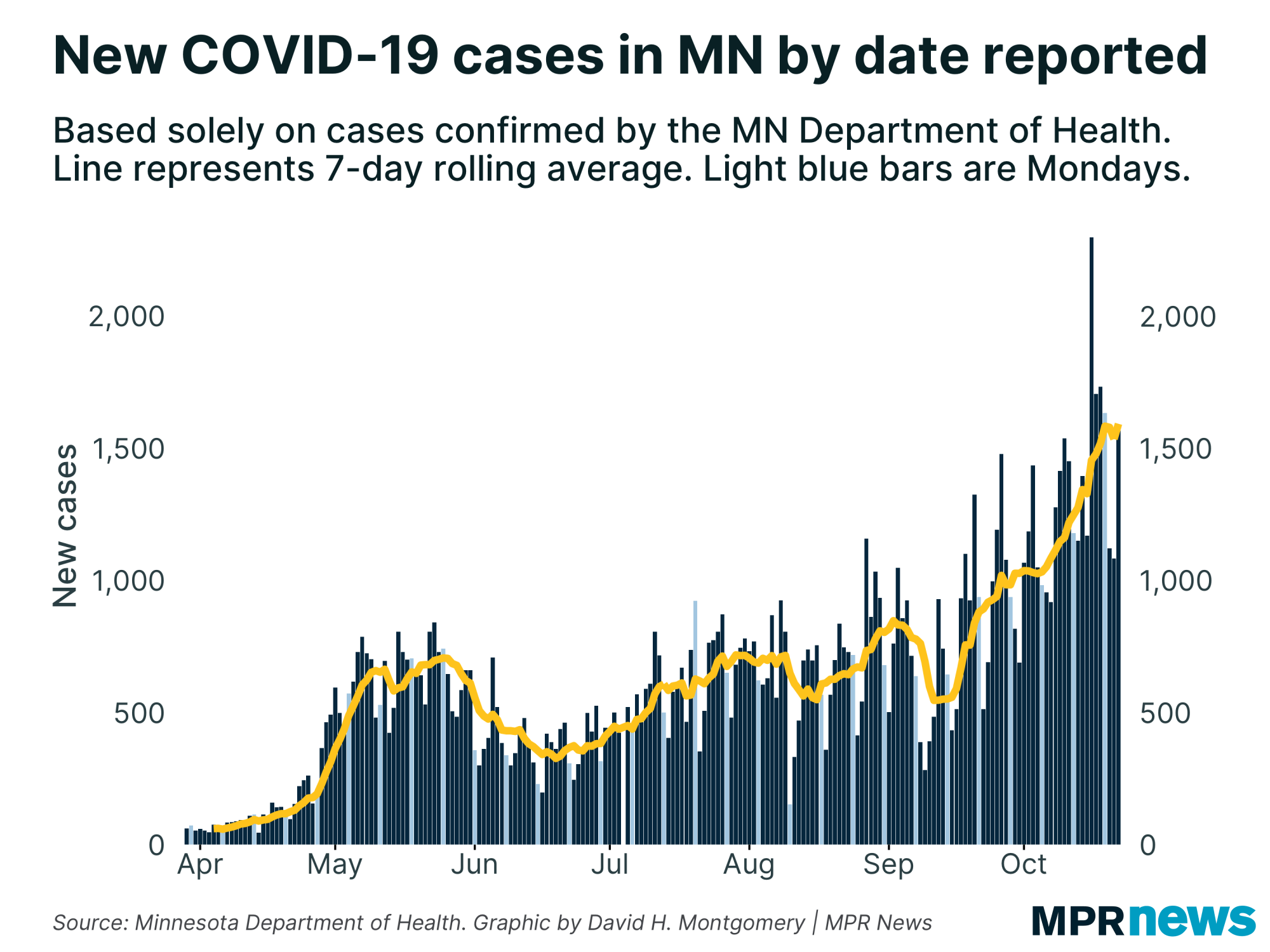 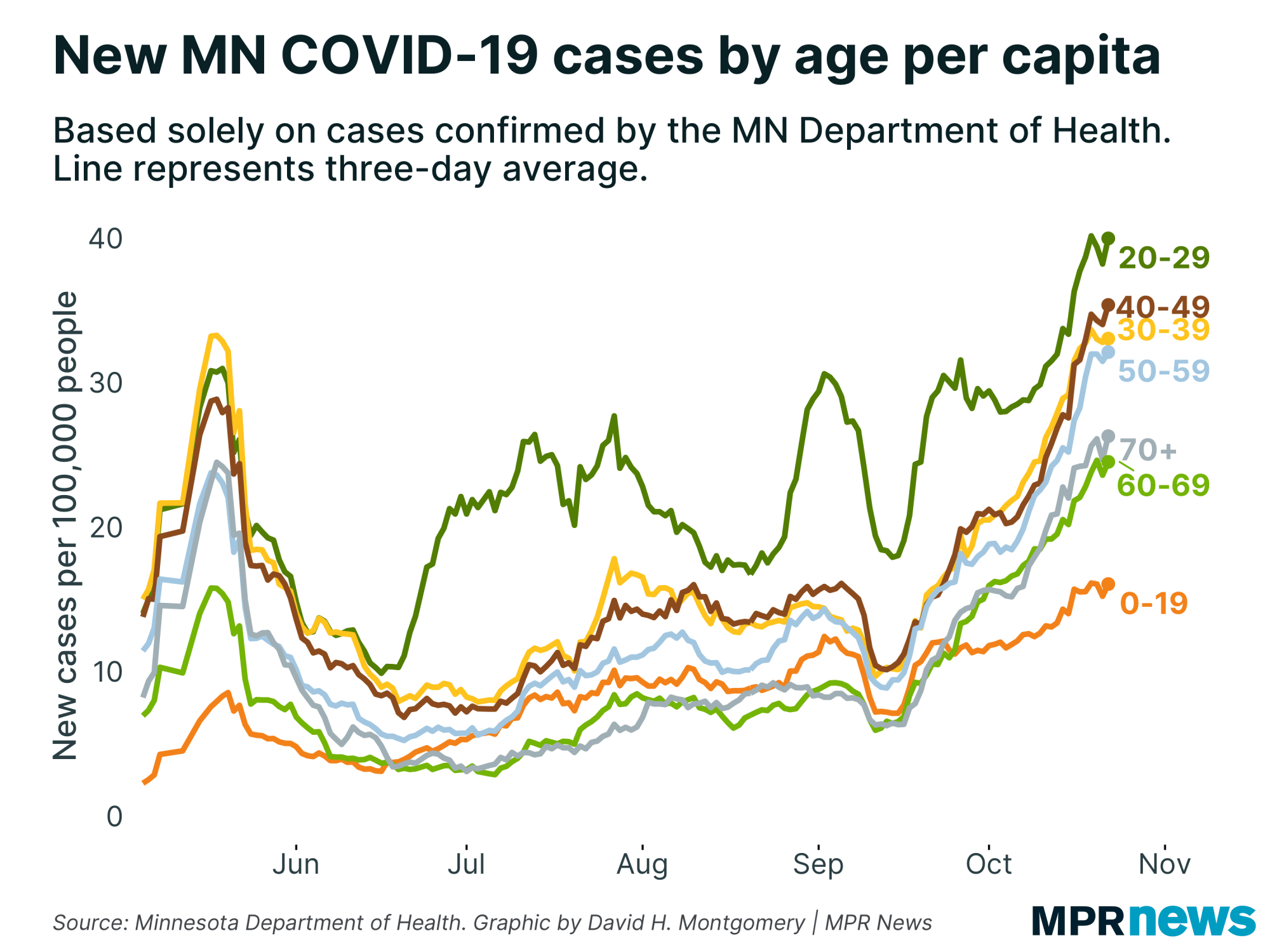 While less likely to feel the worst effects of the disease and end up hospitalized, experts worry youth and young adults will spread it to grandparents and other vulnerable populations and that spread could hamper attempts to reopen schools and campuses completely to in-person teaching.

The number of high school-age children confirmed with the disease has also grown, with more than 11,500 total cases among children ages 15 to 19 since the pandemic began. 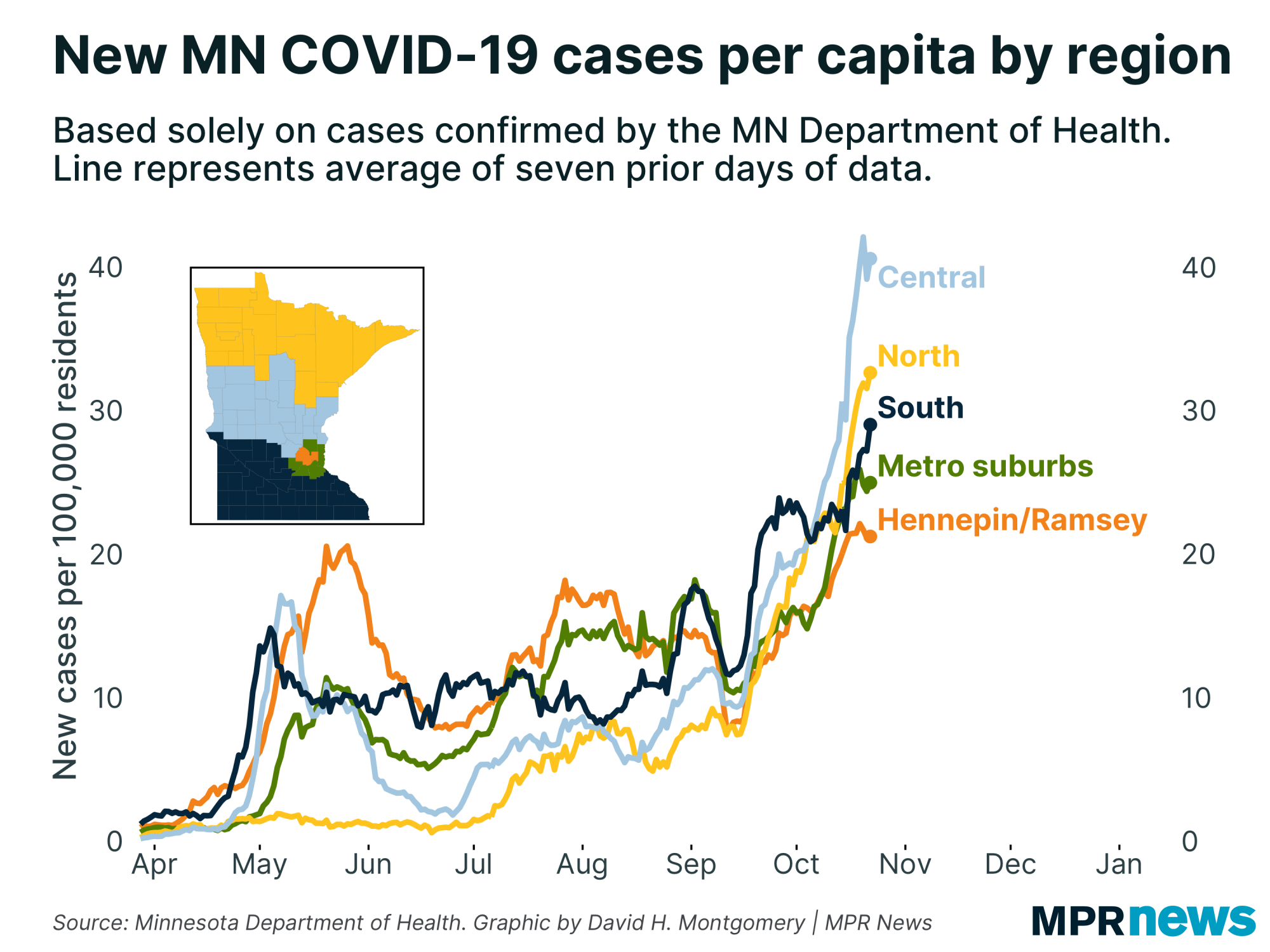 Newly reported cases are highest in western Minnesota — the northwest, west-central and southwest areas of the state have been averaging more than 40 new cases per day per 100,000 people, higher than any of the state’s central and eastern regions.

The data don’t explain why. However, cases are surging currently in the Dakotas. North Dakota has the country’s worst per-capita spread rate.

Northern Minnesota, once the region least affected by the disease, has also seen its caseload grow dramatically in recent weeks. Deaths have also spiked this week in northern and central Minnesota. 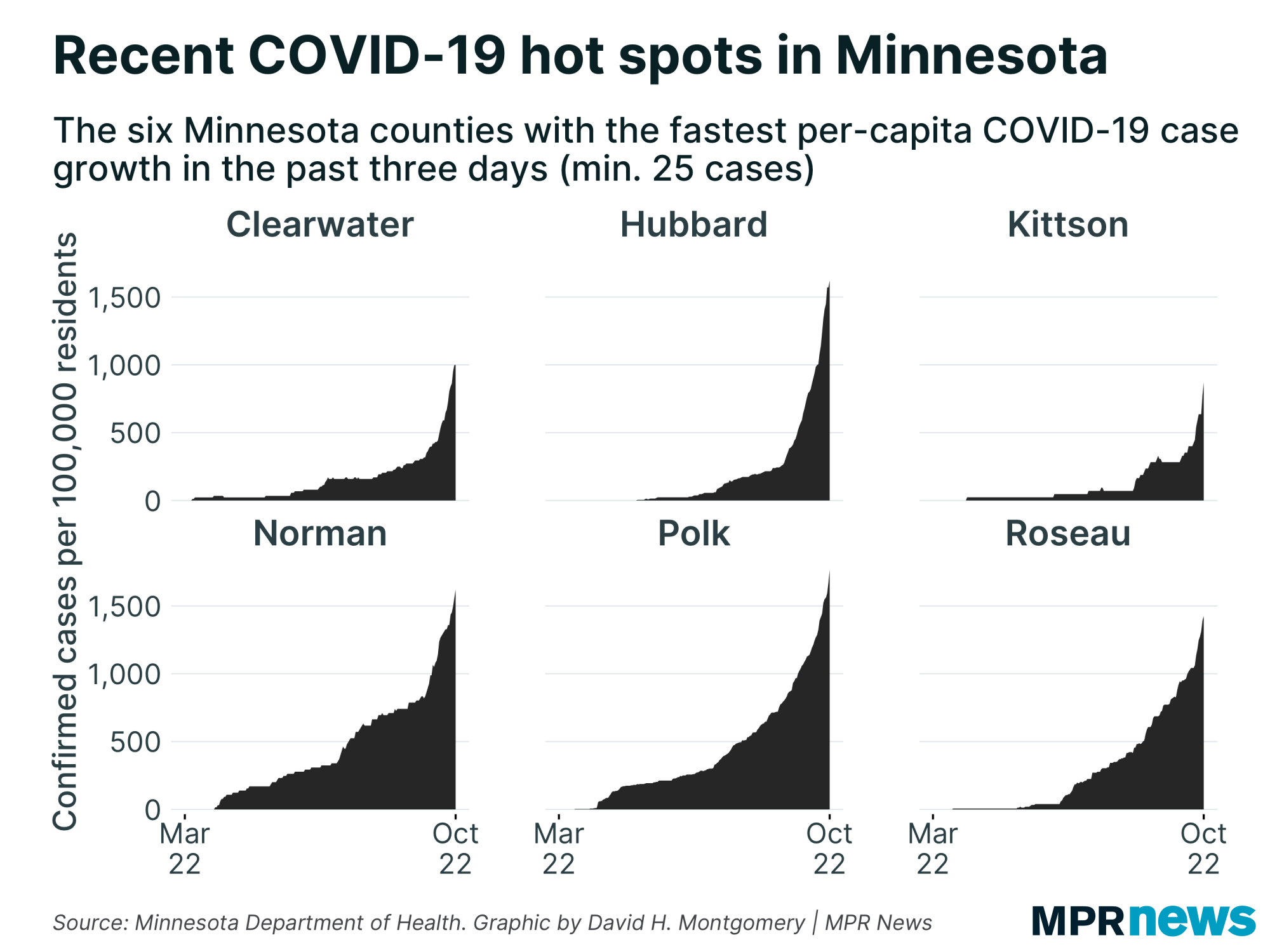 Ehresmann and Malcolm tied the recent steep rise in cases and deaths to “COVID fatigue” but also described people who are ill but refuse to get tested because they don't want to admit they have it and don't quarantine as a contributing factor in spreading the disease. 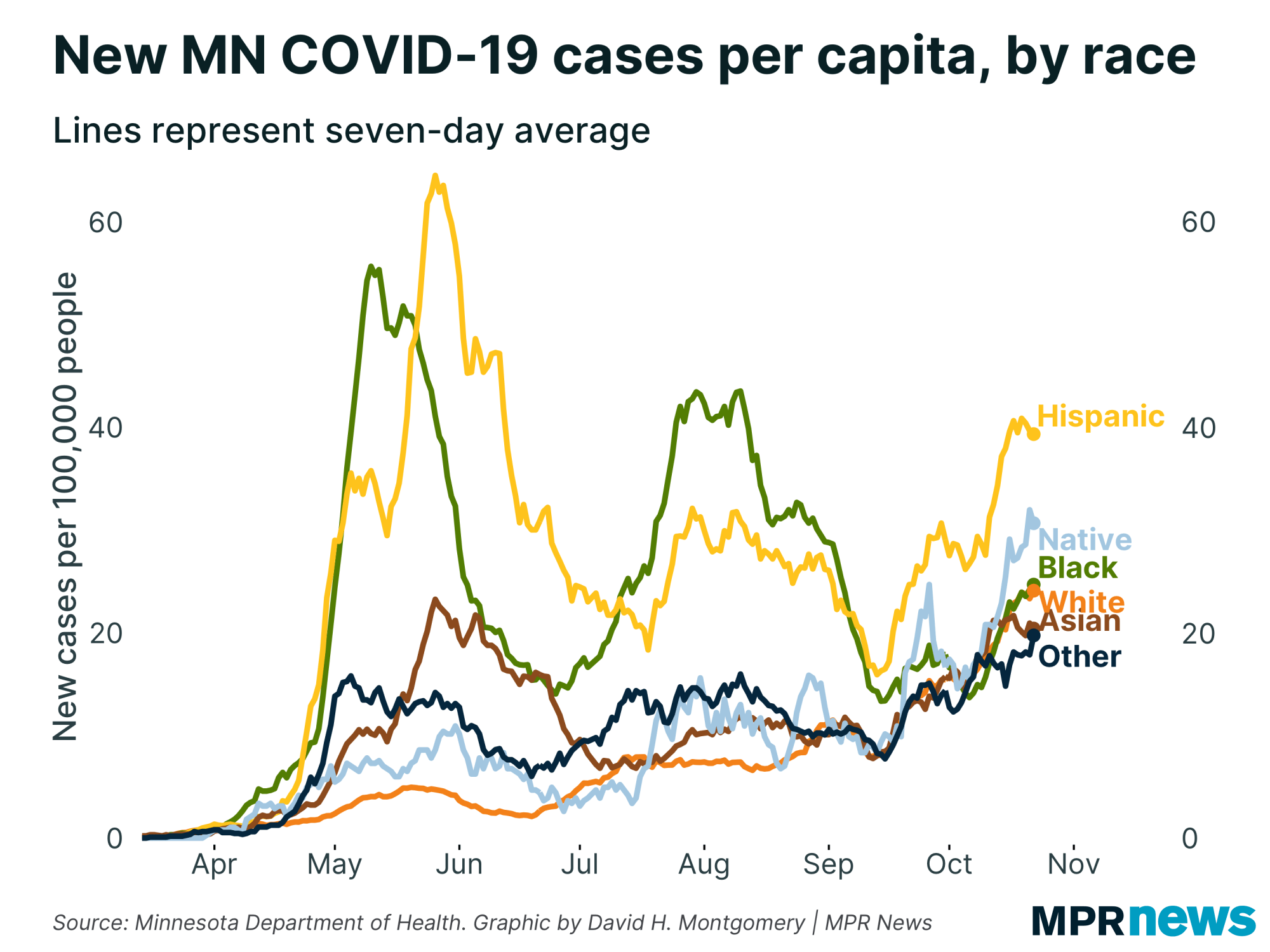 With the rampant spread across the state, Minnesota officials earlier this week strongly suggested people rethink their holiday plans and avoid multifamily celebrations or big gatherings with friends.

Traditional year-end holiday gatherings may simply may be too risky in a pandemic, Malcolm said Monday. 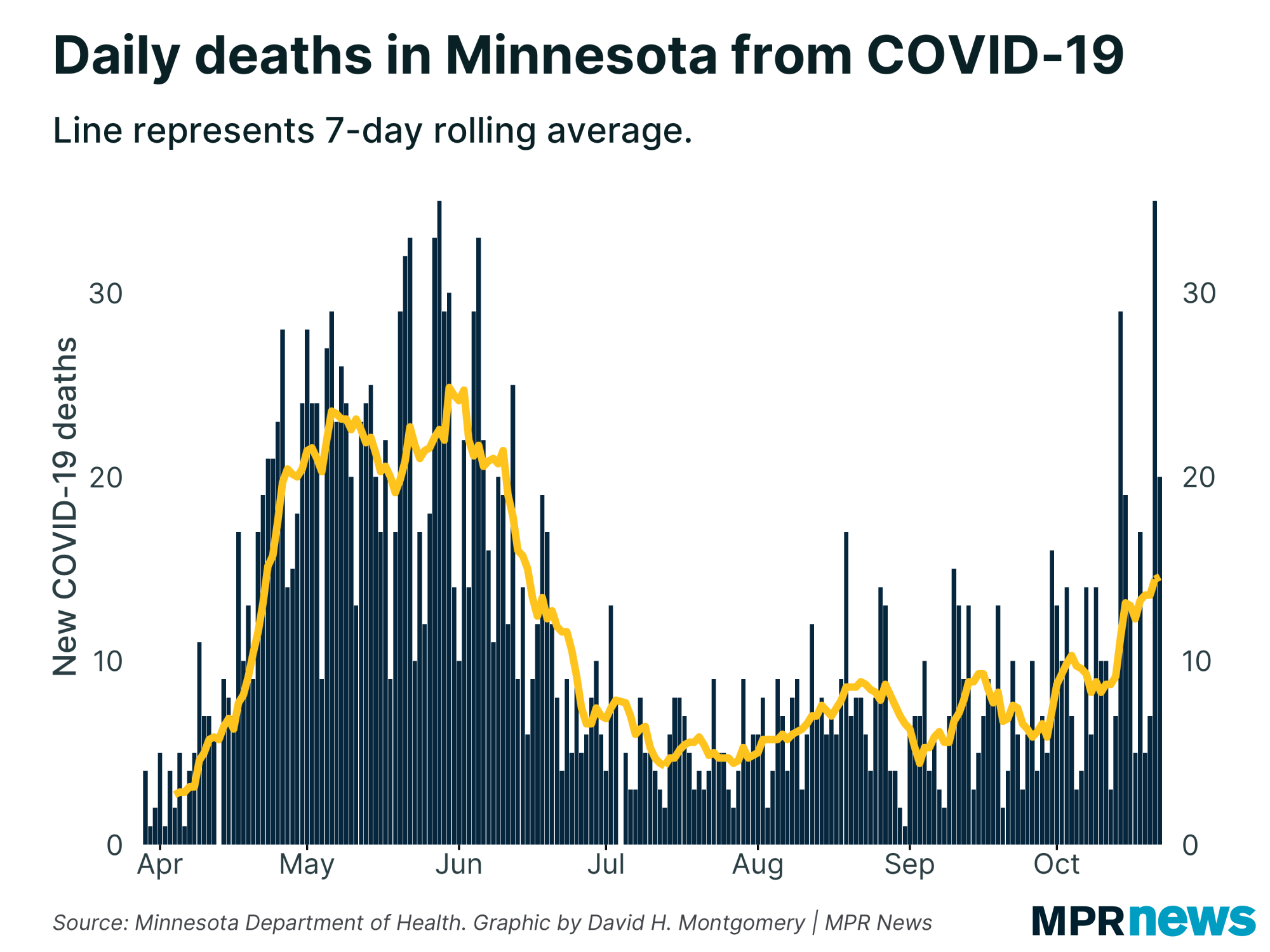 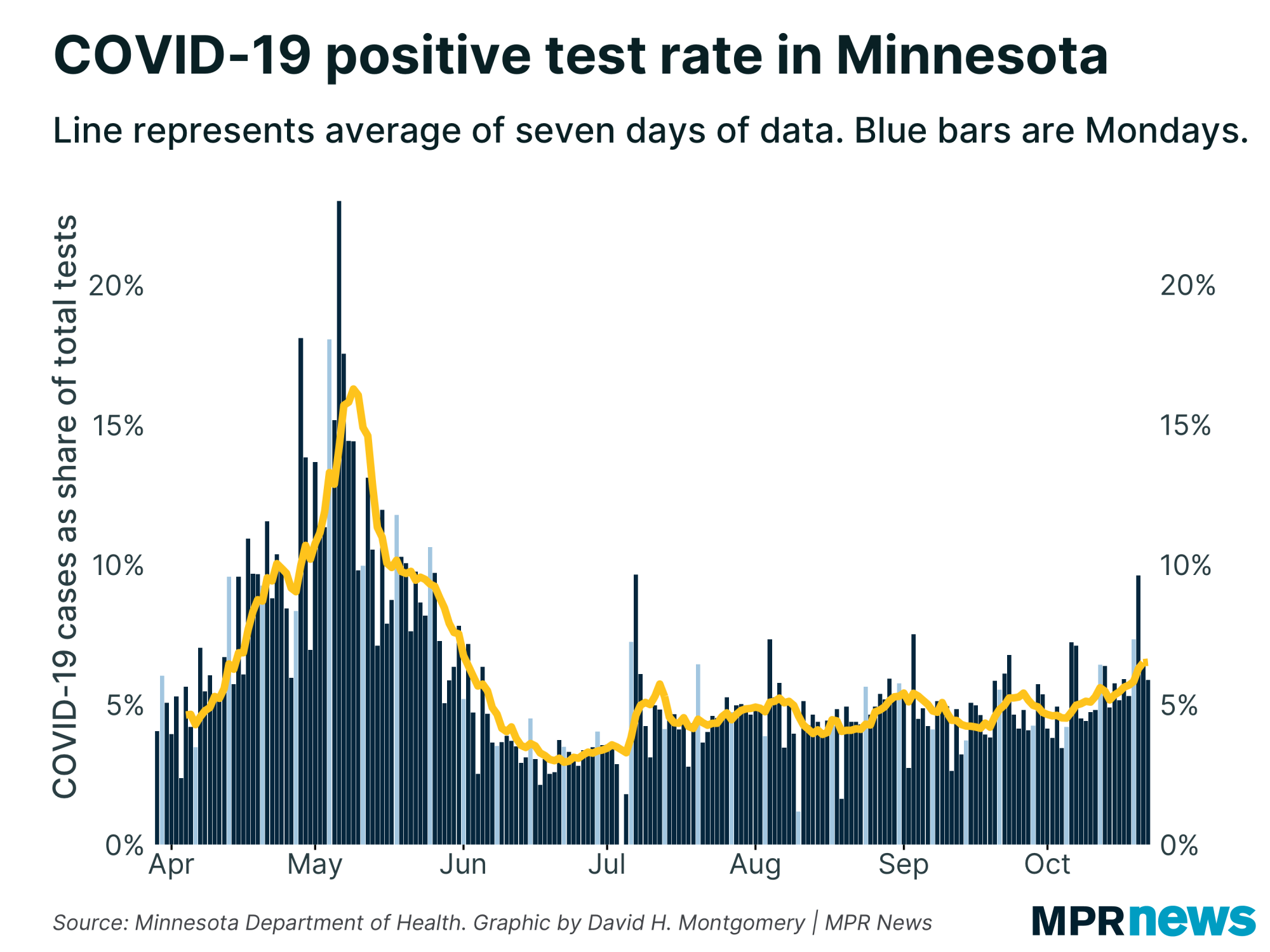 “Going out for happy hour after work with your coworkers or getting together with a bunch of friends that you haven't seen for awhile, all of that seems pretty innocuous. But in reality all of those different interactions can lead to transmission,” Ehresmann told MPR News on Monday.

On Wednesday, she and Malcolm again implored Minnesotans to take personal responsibility to stem the spread of the disease, including wearing masks in indoor public spaces, socially distancing and staying home if you feel ill.

The Minnesota Department of Health on Thursday launched an at-home saliva testing pilot program in two dozen counties or tribal nations around the state. Most locations have few testing options and many are in greater Minnesota, where spread of the virus has been rapid in recent weeks.

The state has contracted with Vault Health to provide the saliva tests, which have been rolled out at in-person collection sites around the state.

People in these counties will be able to order the same test through the mail. It will be shipped to their home and performed with the help of a health care professional over the internet. The test will then be shipped to a facility in Oakdale, and results will be available electronically in 24-48 hours.

Test-takers will be asked for insurance information, but it will be free if insurance won't cover it or if they don't have insurance.

Winter Carnival organizers say show will go on, with changes

Organizers of the St. Paul Winter Carnival say the annual celebration will go on next year, but with changes because of the pandemic.

The ice- and snow-carving events will move to drive-thru displays at the state fairgrounds, the St. Paul Heritage and Festival Foundation said. A 5K race around Lake Phalen will replace the usual runs out of downtown St. Paul. The two traditional parades have already been canceled.

Organizers say they are bringing back a softball tournament and moving the long-running jigsaw puzzle contest online via Zoom teleconferencing.

The Winter Carnival is scheduled for Jan. 28 through Feb. 7.

Hotel stays help dozens experiencing homelessness find more permanent homes: Hennepin County moved people, especially those most vulnerable to the worst effects of COVID-19, from shelters into private rooms in five hotels. The plan was to reduce crowding and protect people most at risk. There was another benefit: 56 people have moved into permanent housing since the start of the hotel efforts.

First-year teachers get a crash course on dealing with chaos and change in pandemic: Managing classroom chaos — and anxiety — are just some of the usual challenges that come with being a first-year teacher. But this year, those new teachers also have to master remote learning and managing all of the extra health protocols.

To read the original reports and see related COVID-19 stories, follow this link to the MPR News website.  https://www.mprnews.org/story/2020/10/23/latest-on-covid19-in-mn