Lance Roeschlein holds a blood sample which will be tested for COVID-19 antibodies after it has been processed in the centrifuge.  Photo:  Paul Middlestaedt for MPR News file

State officials expected that late summer and early fall gatherings, sporting events and informal get-togethers among Minnesotans would deliver a surge of cases in October. They also anticipated the wave would put more people in the hospital.

The Health Department Tuesday reported 1,120 new cases of the disease, continuing an October trend of new counts averaging more than 1,000 a day.

The agency’s data also showed 126 people admitted to the hospital — a single-day high reported in the pandemic — with 37 needing intensive care. More than 500 people have been hospitalized over the past week, including 100 ICU cases. The seven-day trend is now close to its late-May peak.

‘We need to take this seriously’

Traditional year-end holiday gatherings may simply may be too risky in a pandemic, Jan Malcolm, the state’s health commissioner, said Monday. 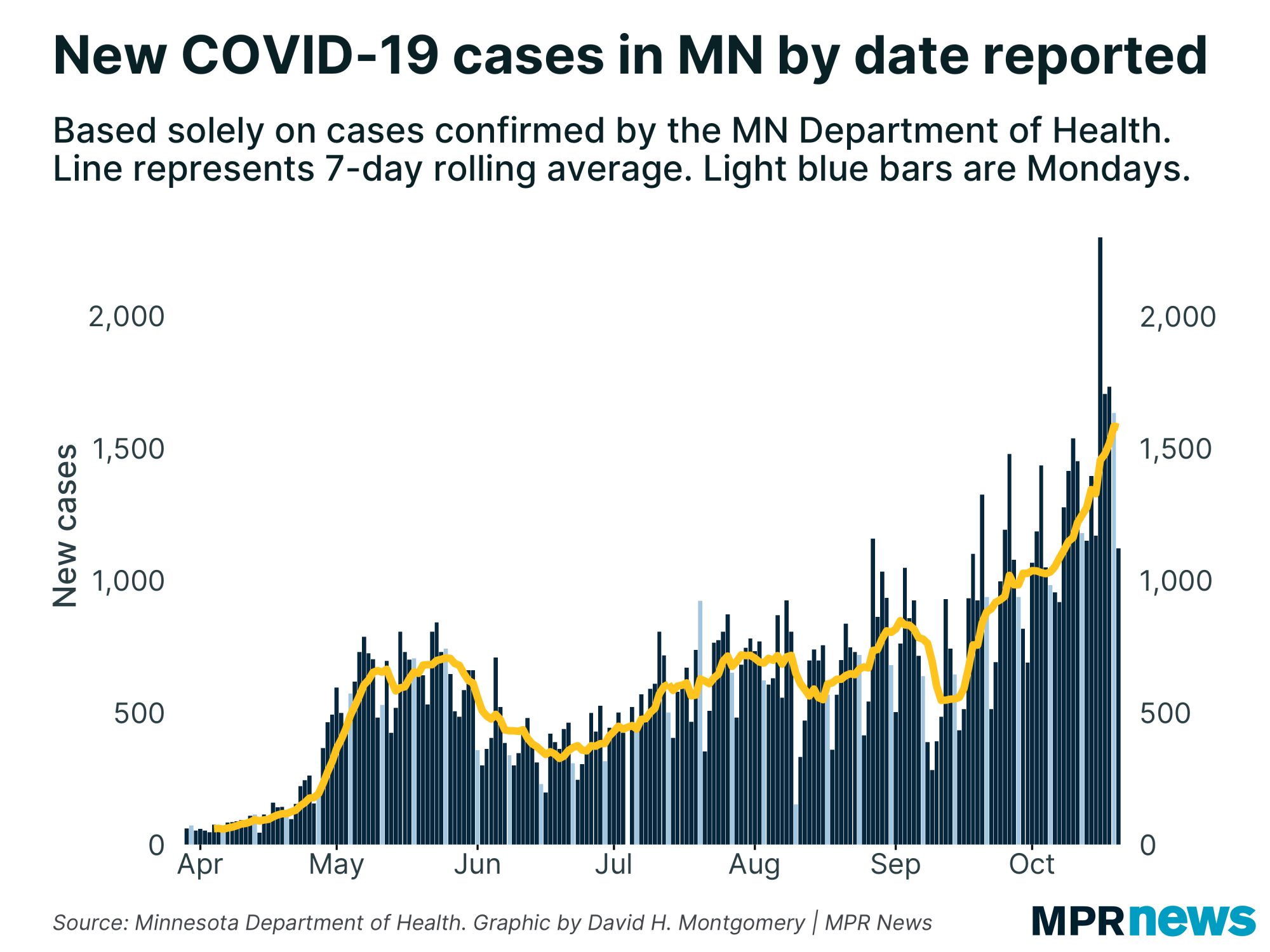 With cases outpacing testing levels, “we’re still not able to catch all the disease that’s out there,” Malcolm said. “The rate of viral presence is still very high and growing.” 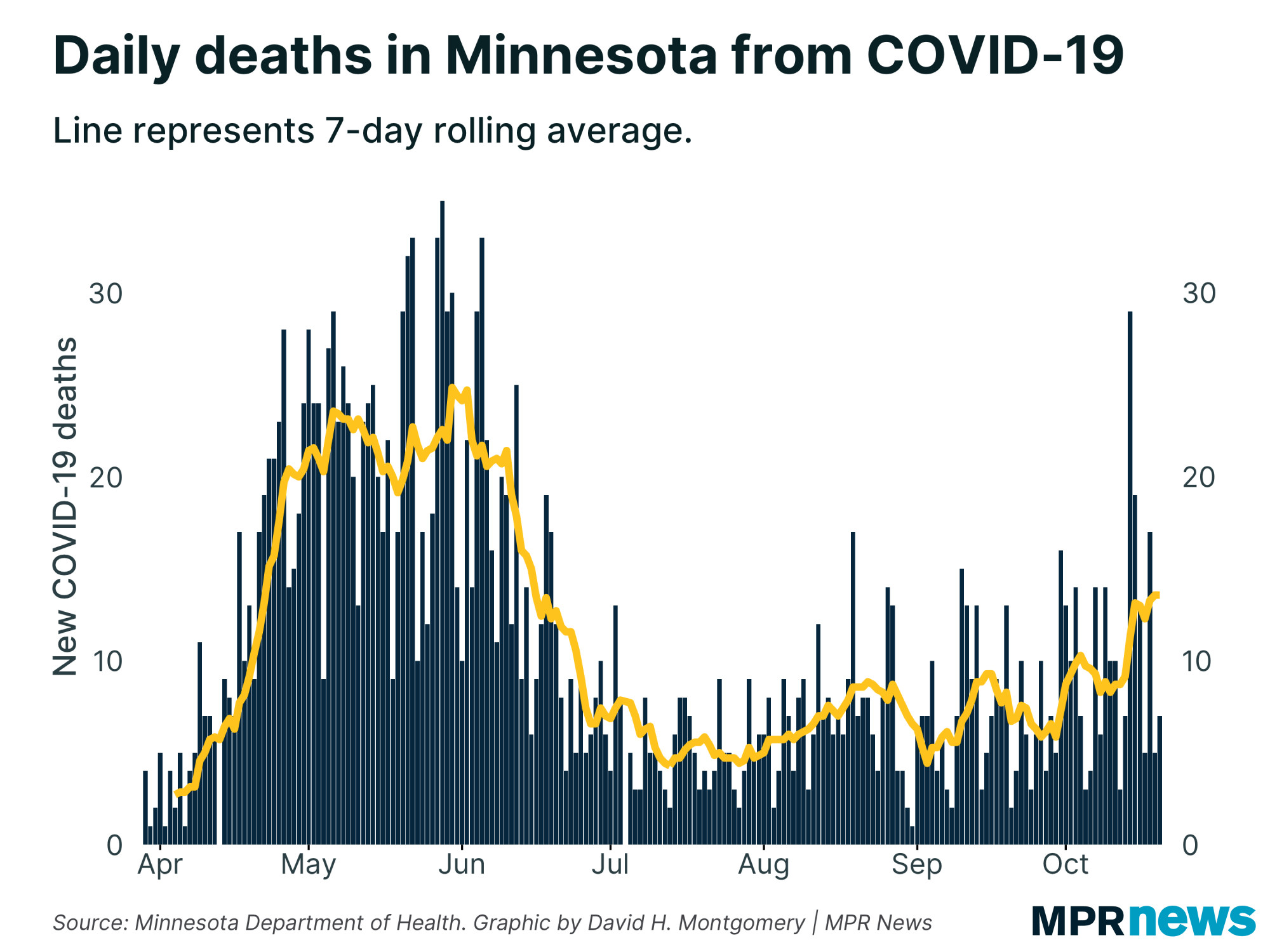 “Going out for happy hour after work with your coworkers or getting together with a bunch of friends that you haven't seen for awhile, all of that seems pretty innocuous. But in reality all of those different interactions can lead to transmission,” Kris Ehresmann, the state’s infectious disease director, told MPR News on Monday.

She said officials are concerned Minnesotans, fatigued by more than seven months of trying to stay vigilant, are letting their guard down in private settings, even as the virus spreads. 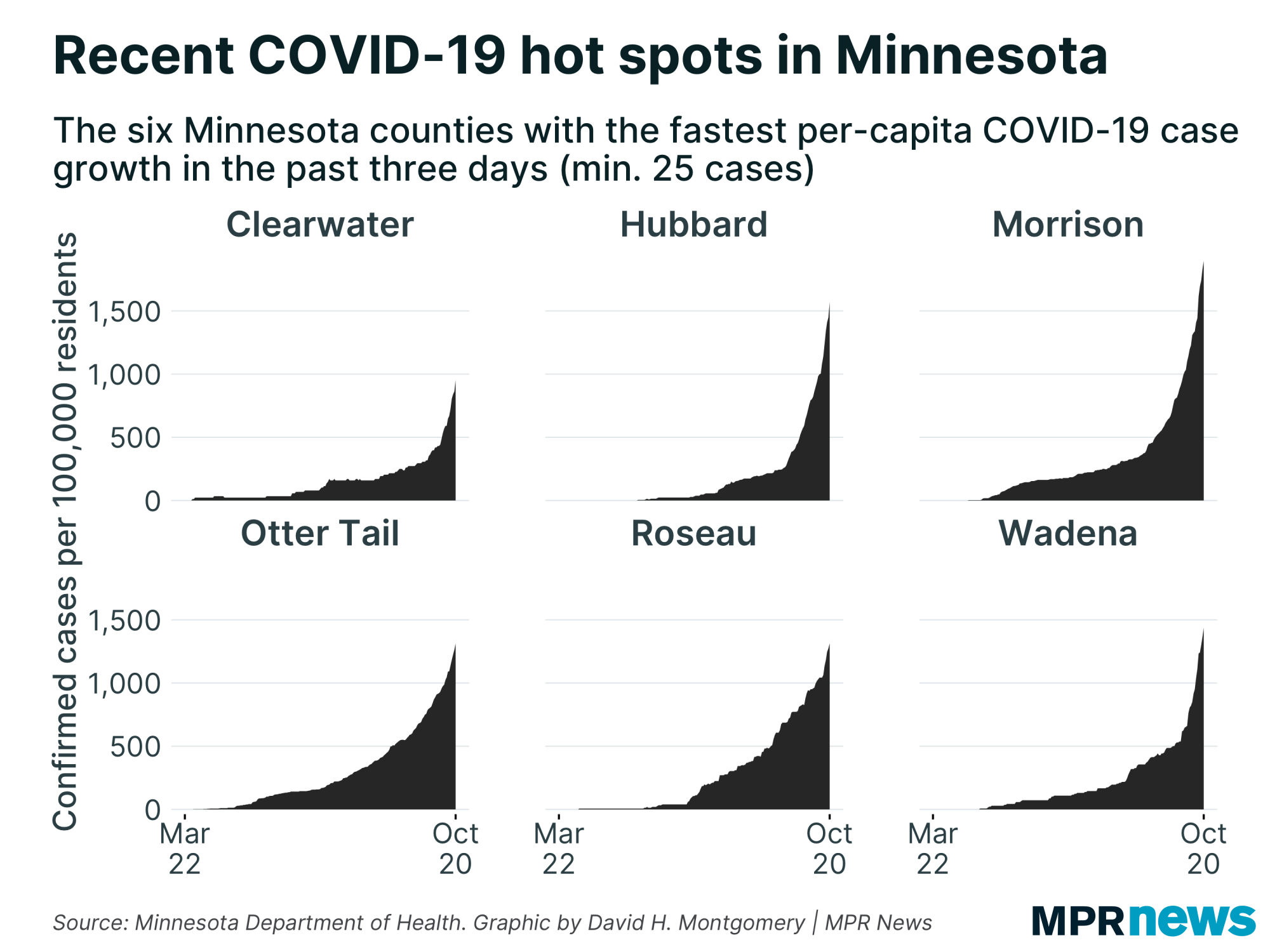 She and Malcolm again implored Minnesotans to take personal responsibility to stem the spread of the disease, including wearing masks in indoor public spaces, socially distancing and staying home if you feel ill. 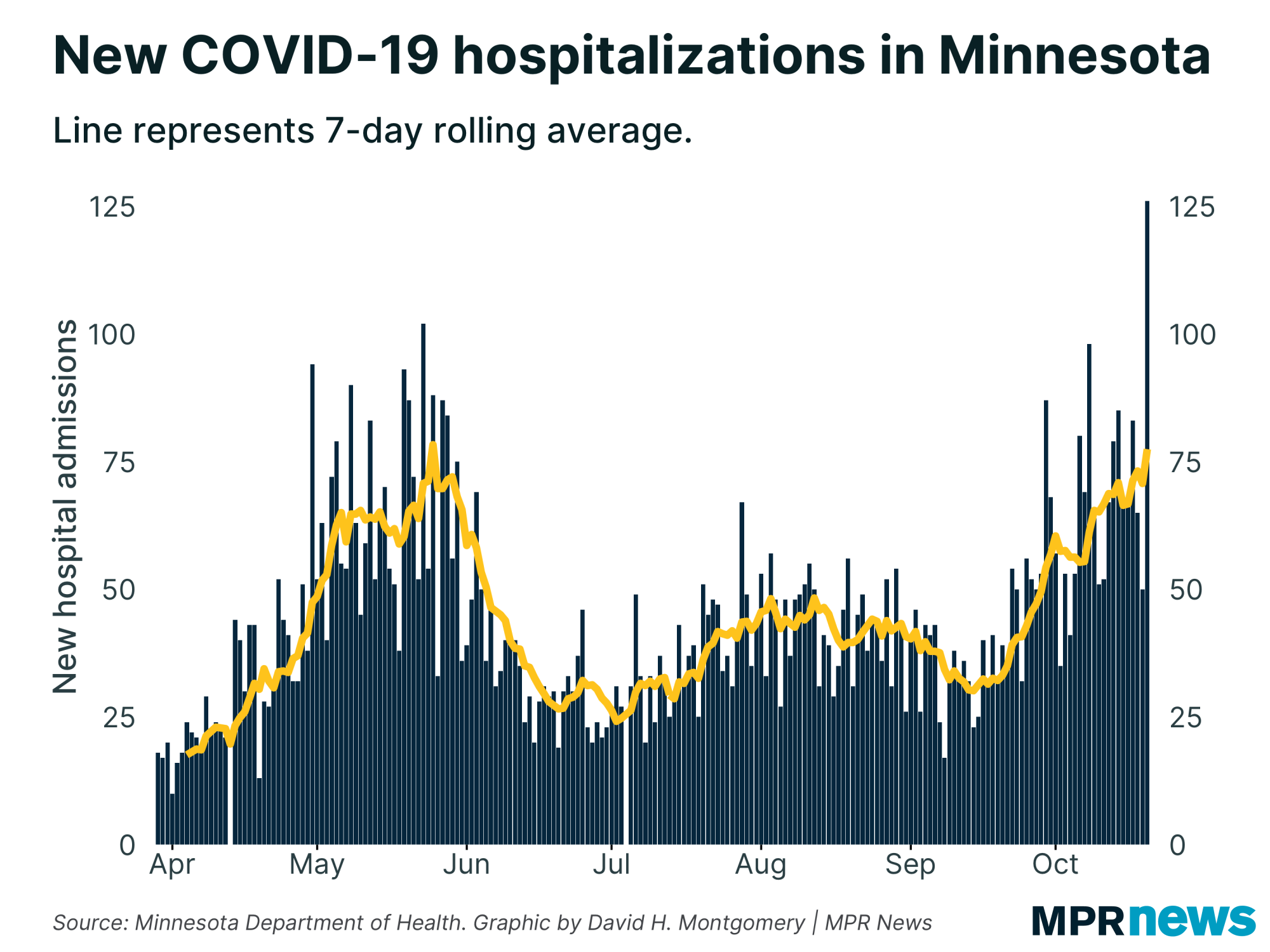 Newly confirmed cases of COVID-19 are growing faster than testing, an indication that the spread of the disease is not simply the product of more testing. Active, confirmed cases, which last week topped 10,000 and then jumped this week above 12,000 remain at a record in the pandemic. 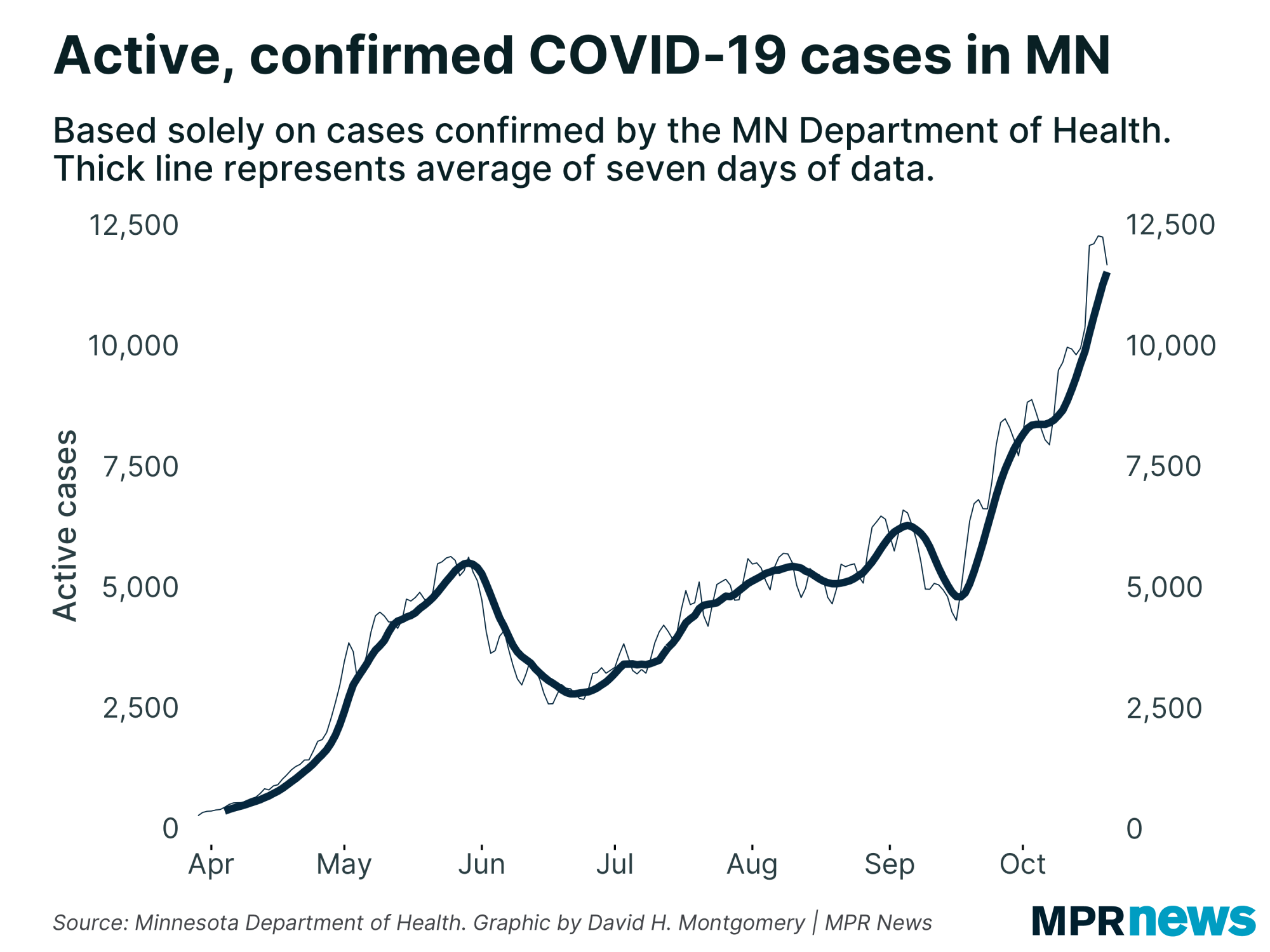 While testing for the disease remains strong, it doesn’t explain the current case growth. Cases are growing more quickly than tests, and the rate of positive tests is continuing to rise above 5 percent, the threshold officials find concerning. 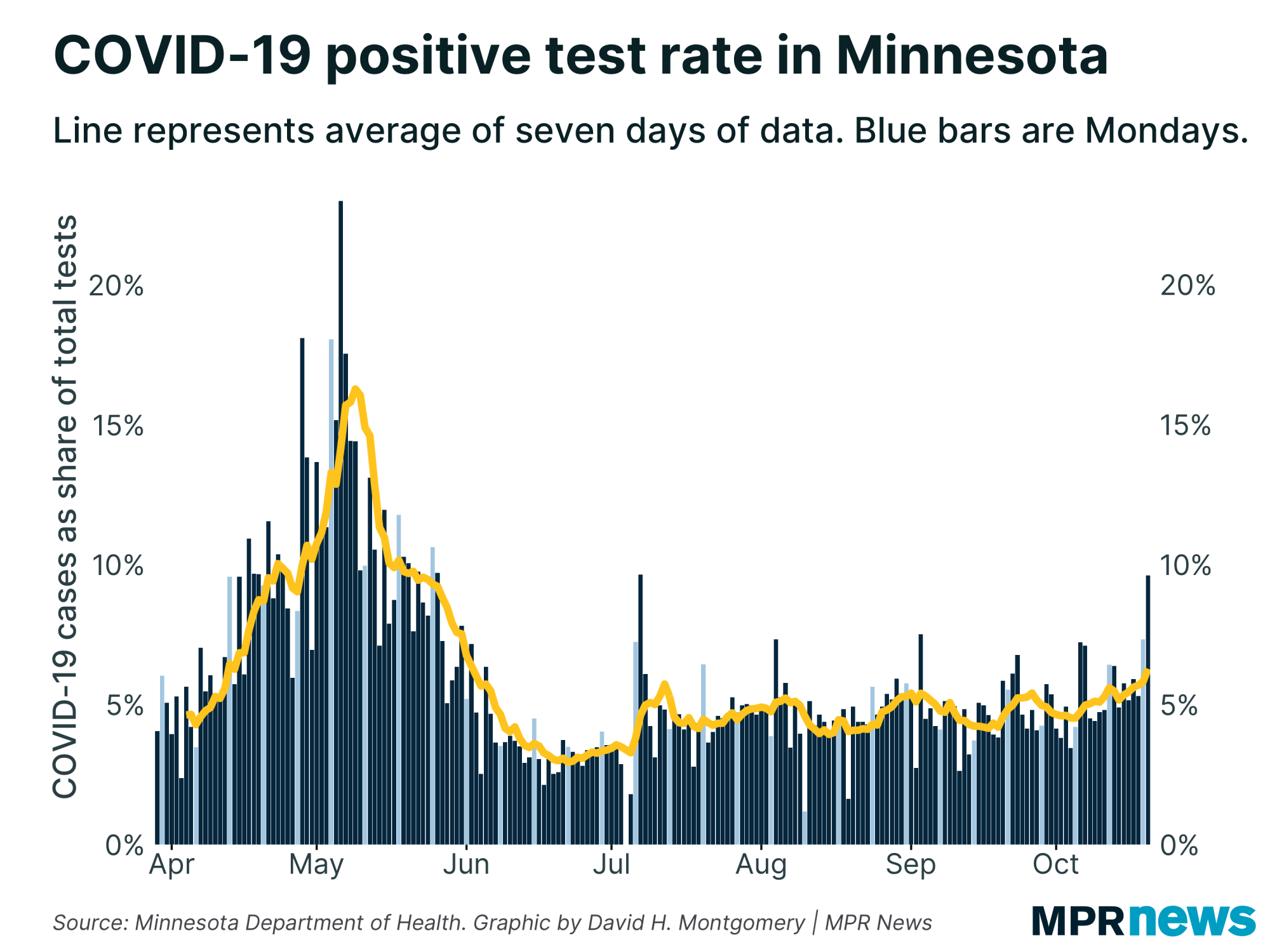 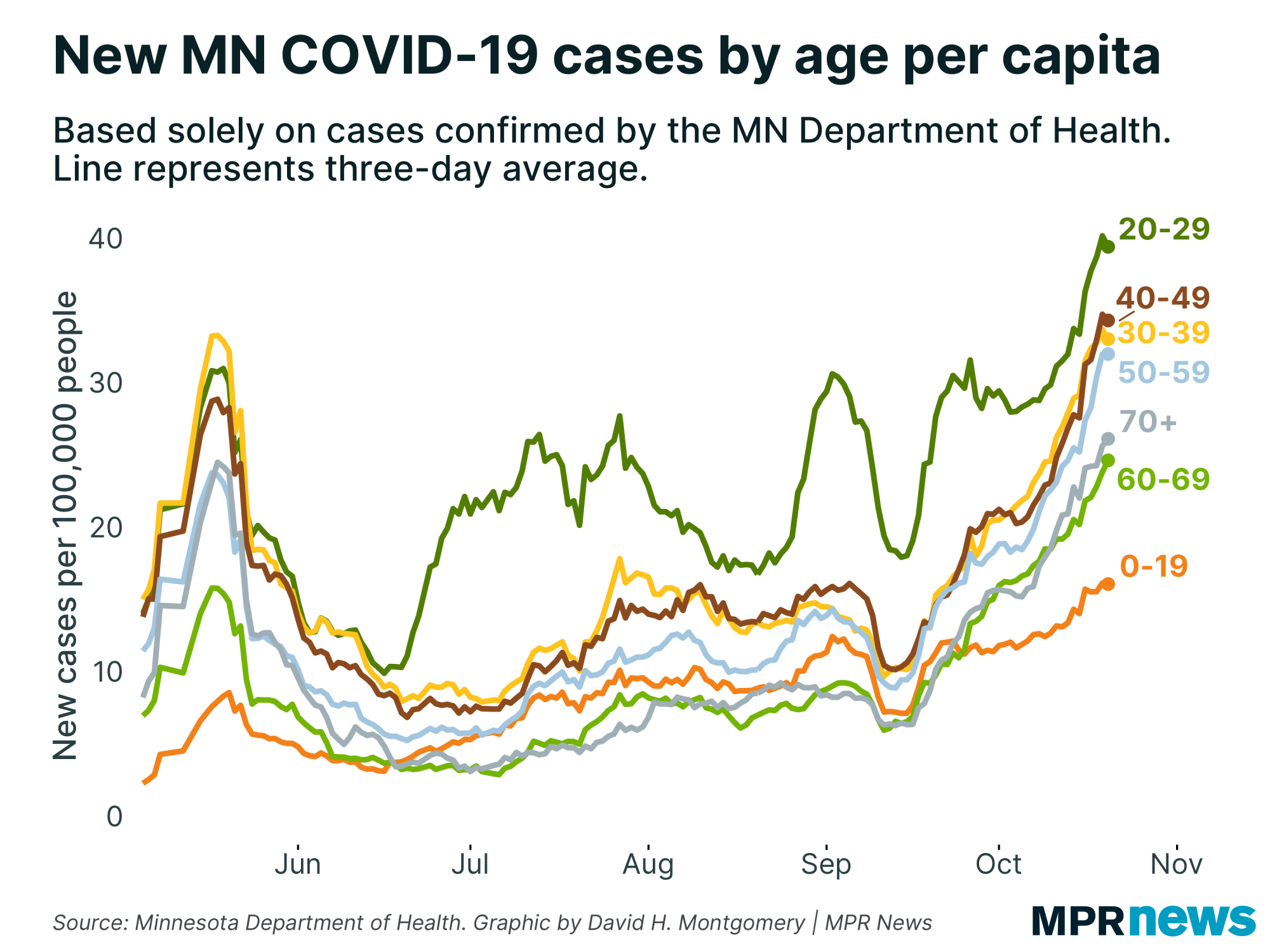 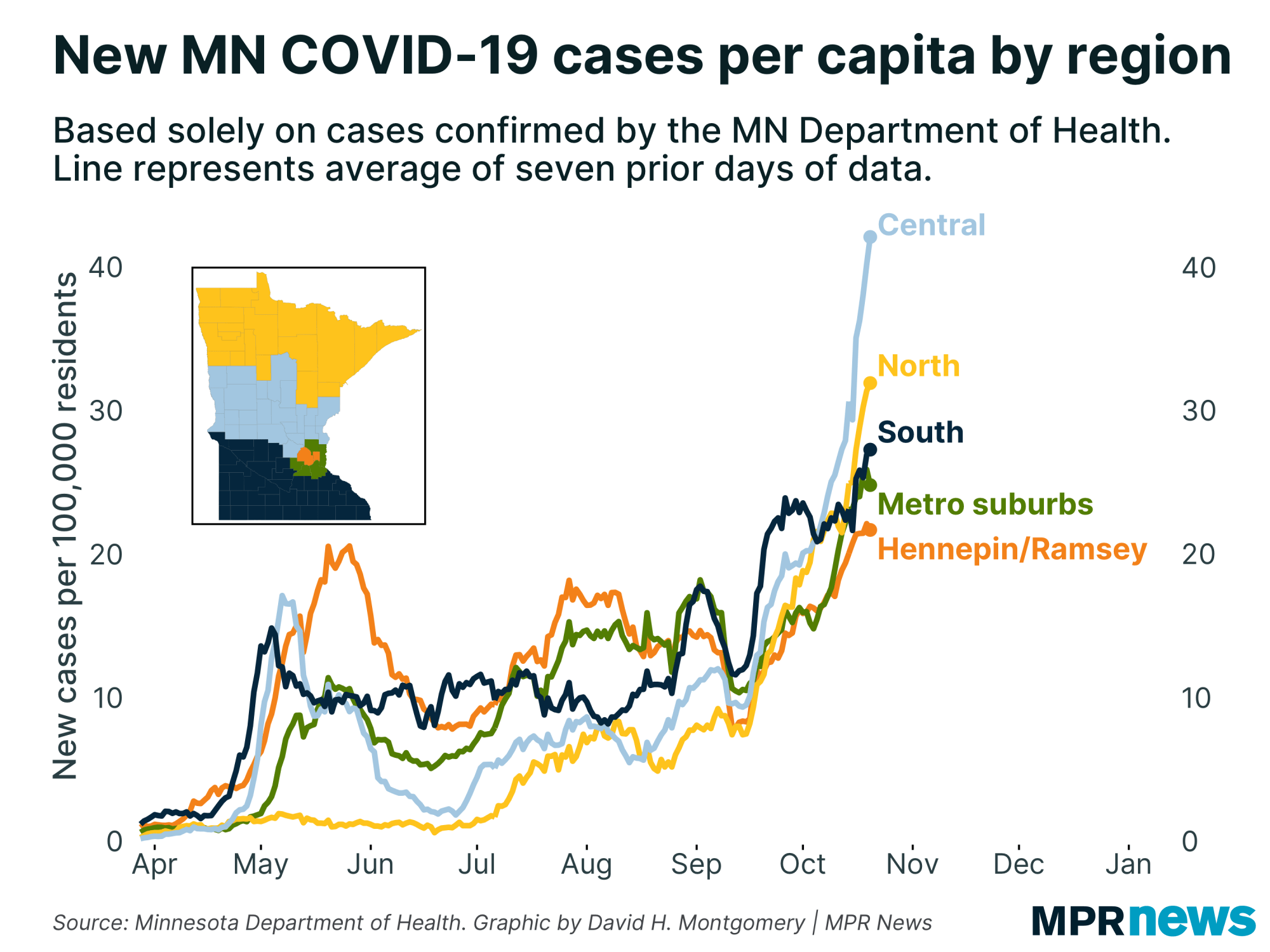 Deaths are also spiking in northern and central Minnesota. 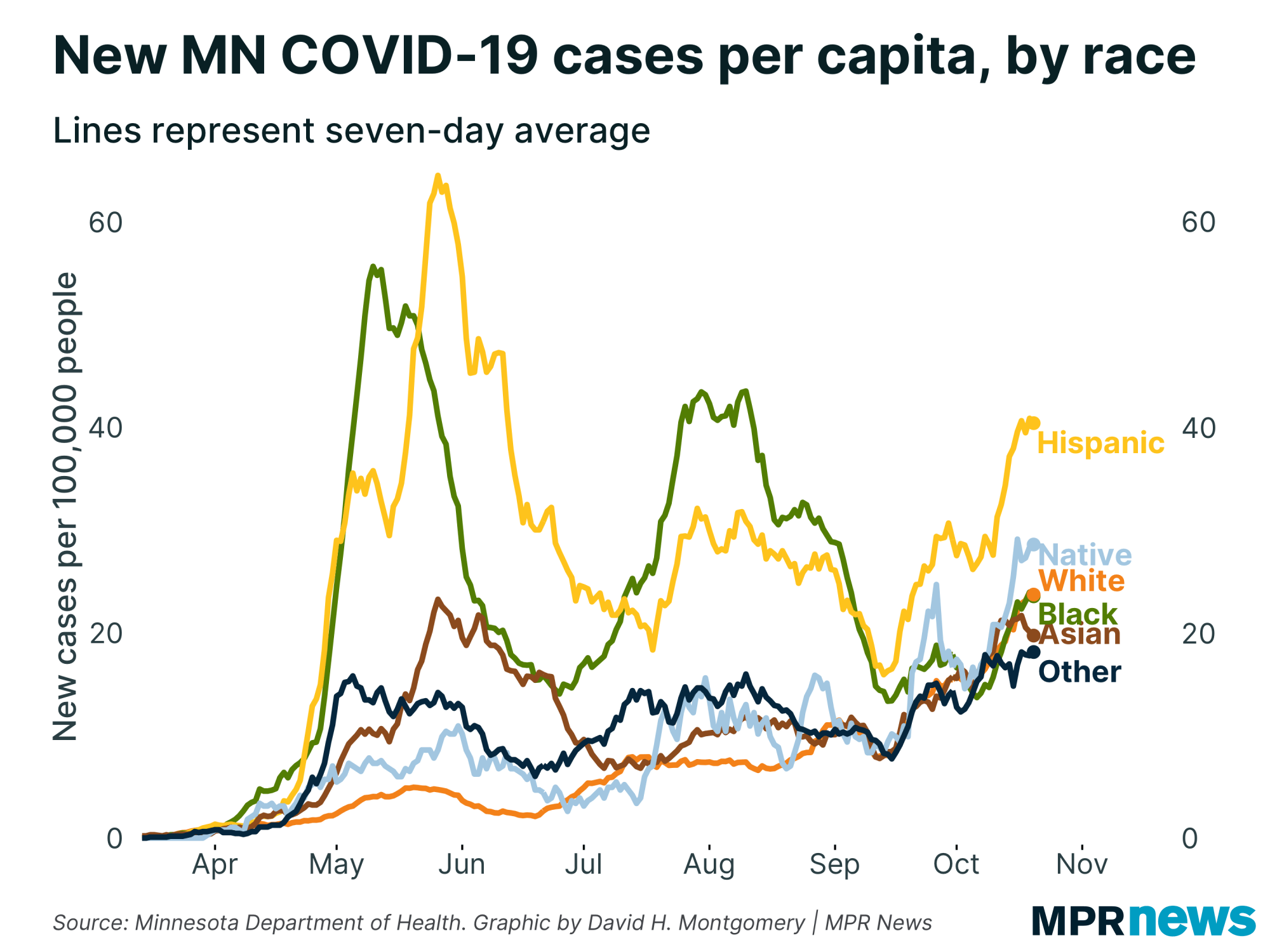 Osterholm: Next 6-12 weeks will be 'darkest of the entire pandemic'

A University of Minnesota expert on infectious disease said that while coronavirus vaccines are in development, he's predicting that the worst of the pandemic is yet to come.

"The next six to 12 weeks are going to be the darkest of the entire pandemic," Michael Osterholm, director of the Center for Infectious Disease Research and Policy, said Sunday on NBC's "Meet the Press."

"Vaccines will not become available in any meaningful way until early to third quarter of next year and even then half the U.S. population at this point are skeptical even taking the vaccine,” he added.

Osterholm said the trend in case increases is going in the wrong direction heading into winter, and he that the nation still is lacking a strong unified message on how best to combat COVID-19. He said Americans should not plan on traveling to visit relatives for upcoming holidays to prevent the virus from spreading.

DFL Sen. Tina Smith said she’s tested negative for the coronavirus after learning someone at a recent campaign event now has COVID-19.

Smith briefly quarantined after learning of the potential exposure. But the senator said she was never in close contact with the person. Masks were required at the outdoor event held more than a week ago.

Smith announced Monday that she had a new test that didn’t detect the virus. She said she would travel back to Washington for Senate proceedings.

‘Not just a community problem’

Minnesota health care leaders say they're concerned the rapid spread of the coronavirus will cause staffing problems at clinics and hospitals.

Hennepin Healthcare CEO Jennifer DeCubellis told reporters Friday the problem isn't so much nurses, doctors and other employees being exposed to patients with COVID. She said staff are contracting the virus outside of their workplaces.

"Community spread is not just a community problem — it's a health care problem," she said. "When our workers have exposure or their family members do — just like everybody in the community, they need to quarantine. That takes them out of providing that critical health care service."

DeCubellis said staff exposures to the coronavirus from the community have more than doubled in recent weeks.

MN top health officials on what’s behind the Midwest COVID-19 surge: In Wisconsin, hospitals are at or near capacity following a tripling of coronavirus patients in the last month. North Dakota and South Dakota showed the highest number of cases per capita in the country based on the most recent seven-day average. Minnesota set its own record for new cases on Friday, and hospitalizations and deaths in the state continue to rise.

Anoka’s huge Halloween festival returns to its roots amid pandemic: This year marks a century of Halloween celebrations for the Twin Cities suburb. While COVID-19 is forcing Anoka to rein in many of its traditions, the 2020 festival has not been canceled. Here’s what the “Halloween Capital of the World” has planned.

COVID-19 cases tied to MN campaign events — but full impact is unclear: Sixteen cases stemmed from President Donald Trump’s Sept. 18 rally in Bemidji — and four more from the protests outside. So far, only three cases have been traced to Trump’s Sept. 30 rally in Duluth. And one case has been connected to Democratic challenger Joe Biden’s campaign stop at a union training center in Duluth.

To read all of the original reports and see more COVID-19 updates, follow this link to the MPR News website.  https://www.mprnews.org/story/2020/10/21/latest-on-covid19-in-mn