Nothing good has come from Minnesota’s COVID-19 data this week.

Deaths are climbing. A day after reporting 29 COVID-19 deaths — the highest single-day death count in months — Minnesota health officials returned Thursday with an equally grim statistic — 19 more deaths. The two-day total is the worst for the state since early June.

Active, confirmed cases of the disease have for the first time topped 10,000 in the pandemic. The state remains stuck in a weeklong trend of new cases averaging more than 1,000 a day.

‘Highs are getting higher’ 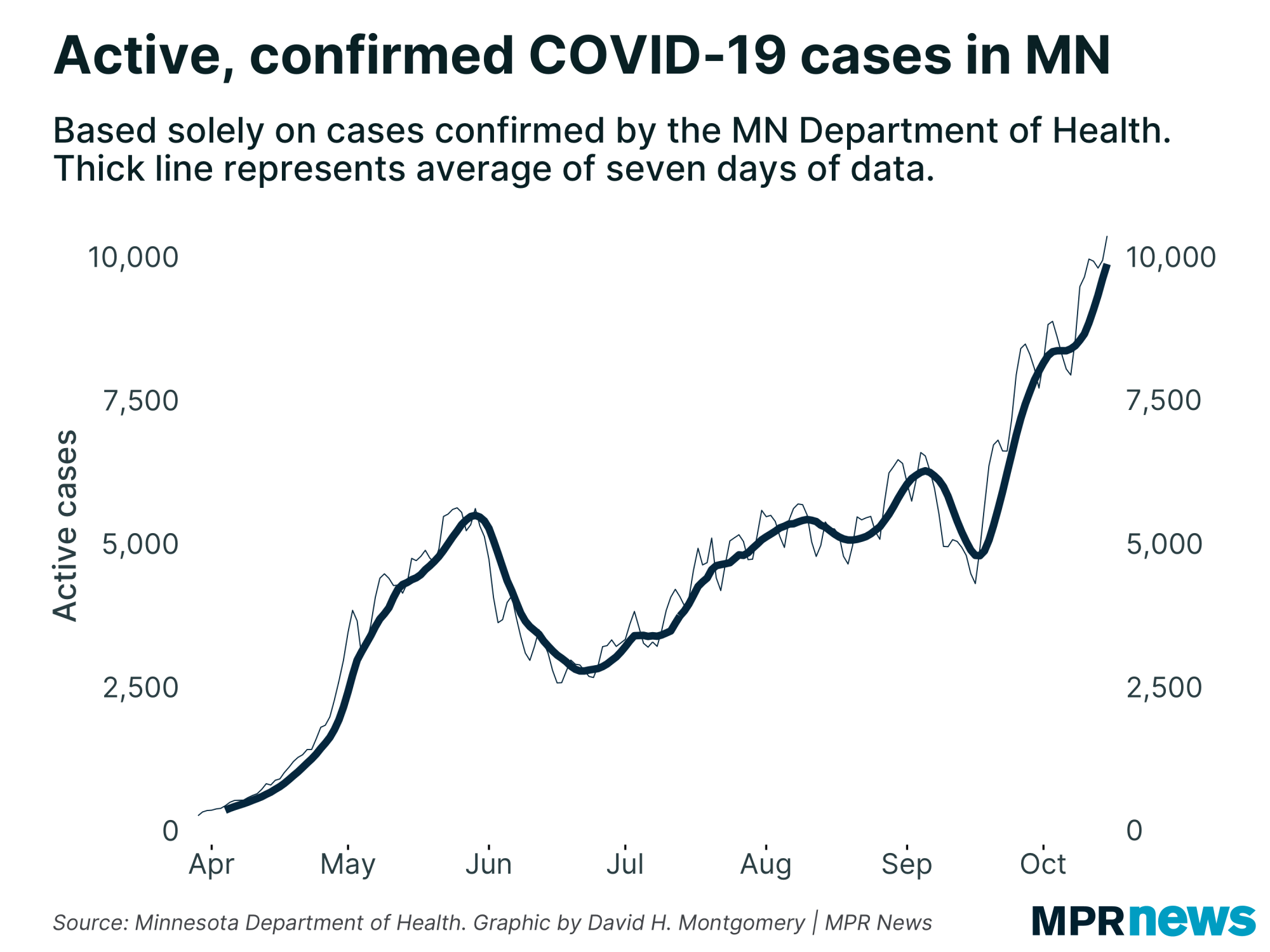 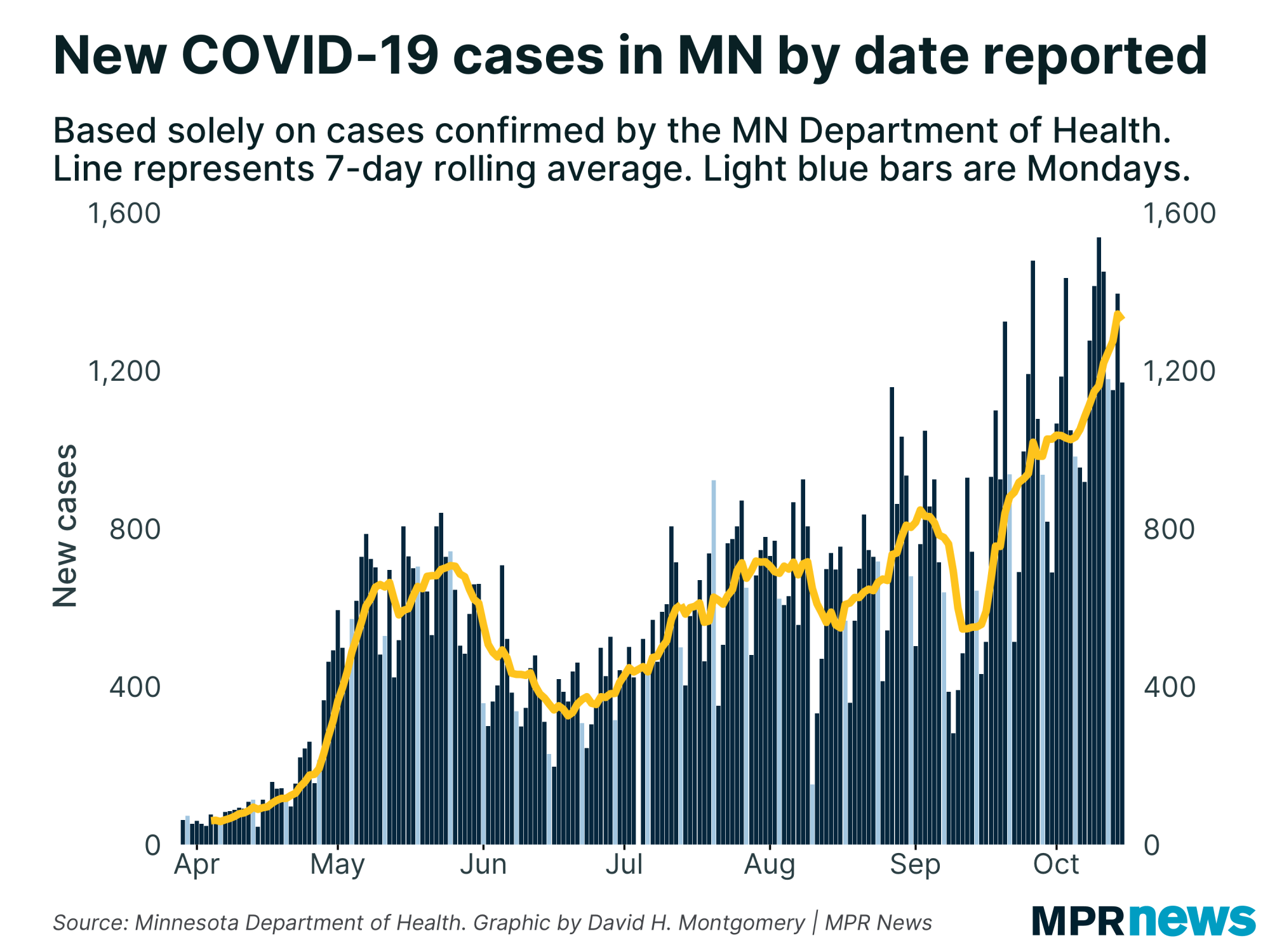 She described the current situation as an “escalating roller coaster,” adding, “I would not say that we have reached any sort of peak at this point.” 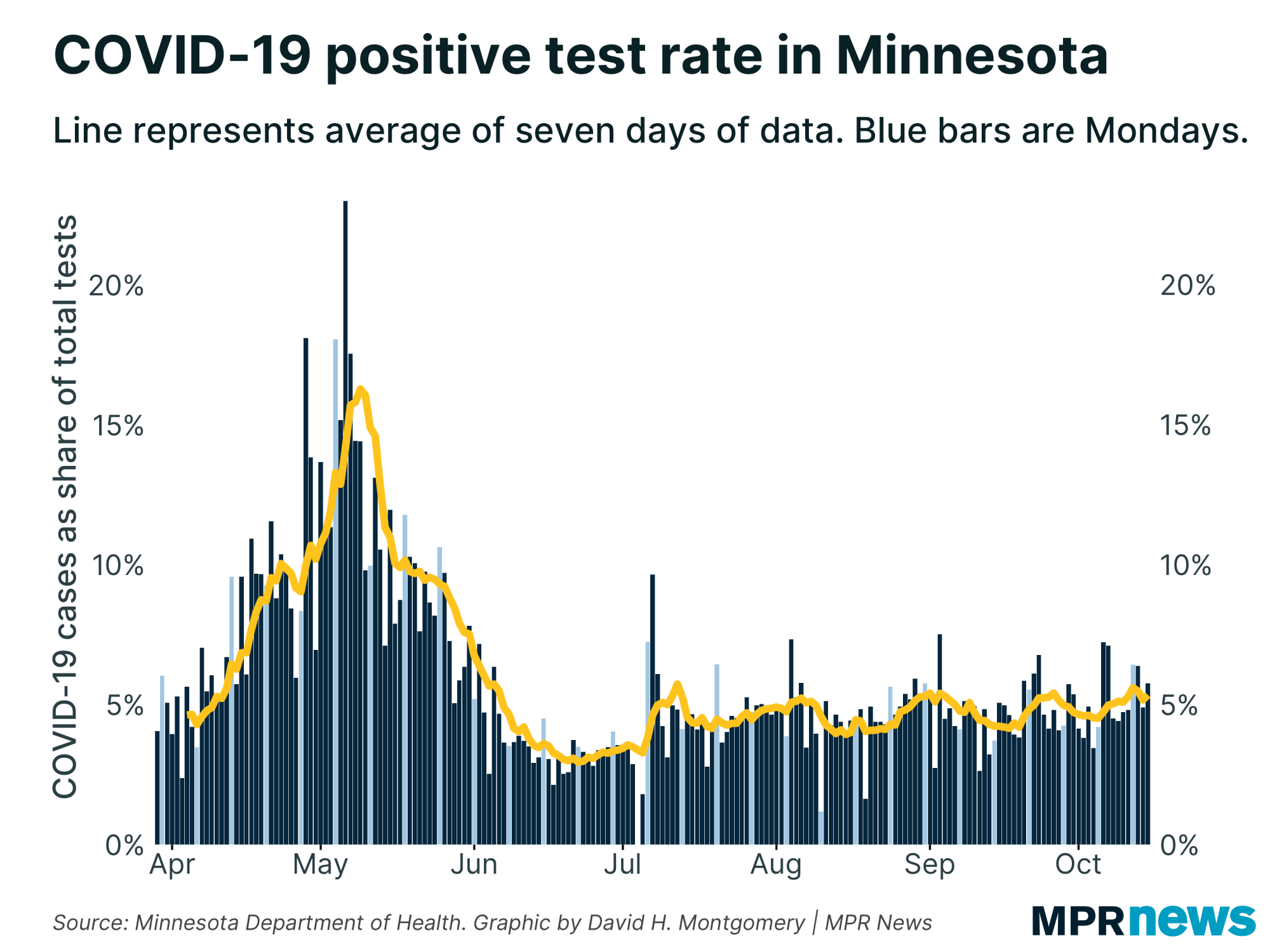 Collectively, Minnesota will soon be able to process 60,000 tests per day, officials said, about twice what it’s managed on its best days to date.

People in their 20s still make up the age bracket with the state’s largest number of confirmed cases — more than 26,500 since the pandemic began, including more than 15,200 among people ages 20-24. 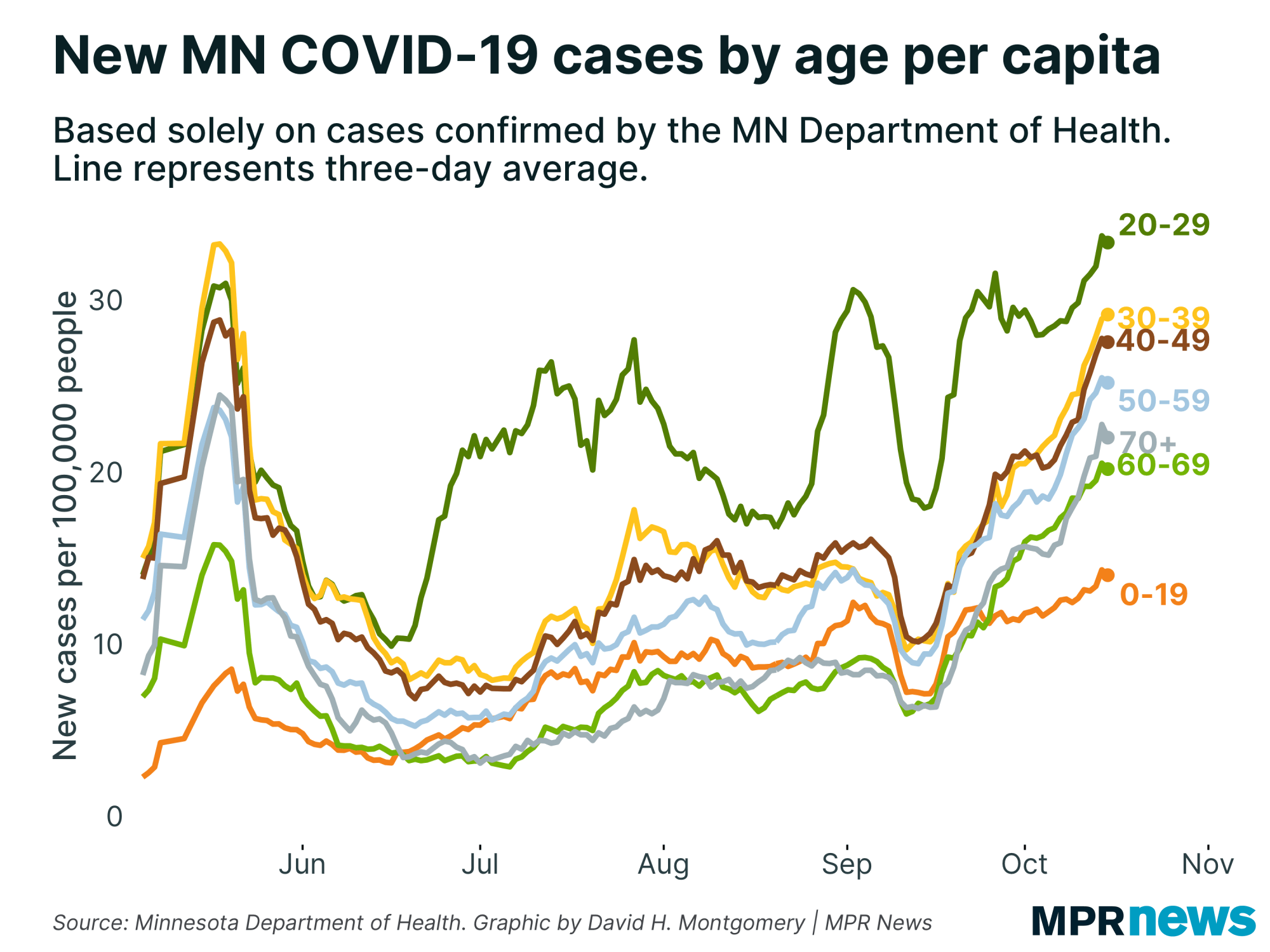 The number of high school-age children confirmed with the disease has also grown, with more than 10,800 total cases among children ages 15 to 19 since the pandemic began.

Central Minnesota cases are skyrocketing relative to its population. It’s not clear why. Northern Minnesota, once by far the region least affected by the disease, has also seen its caseload grow dramatically in recent weeks. 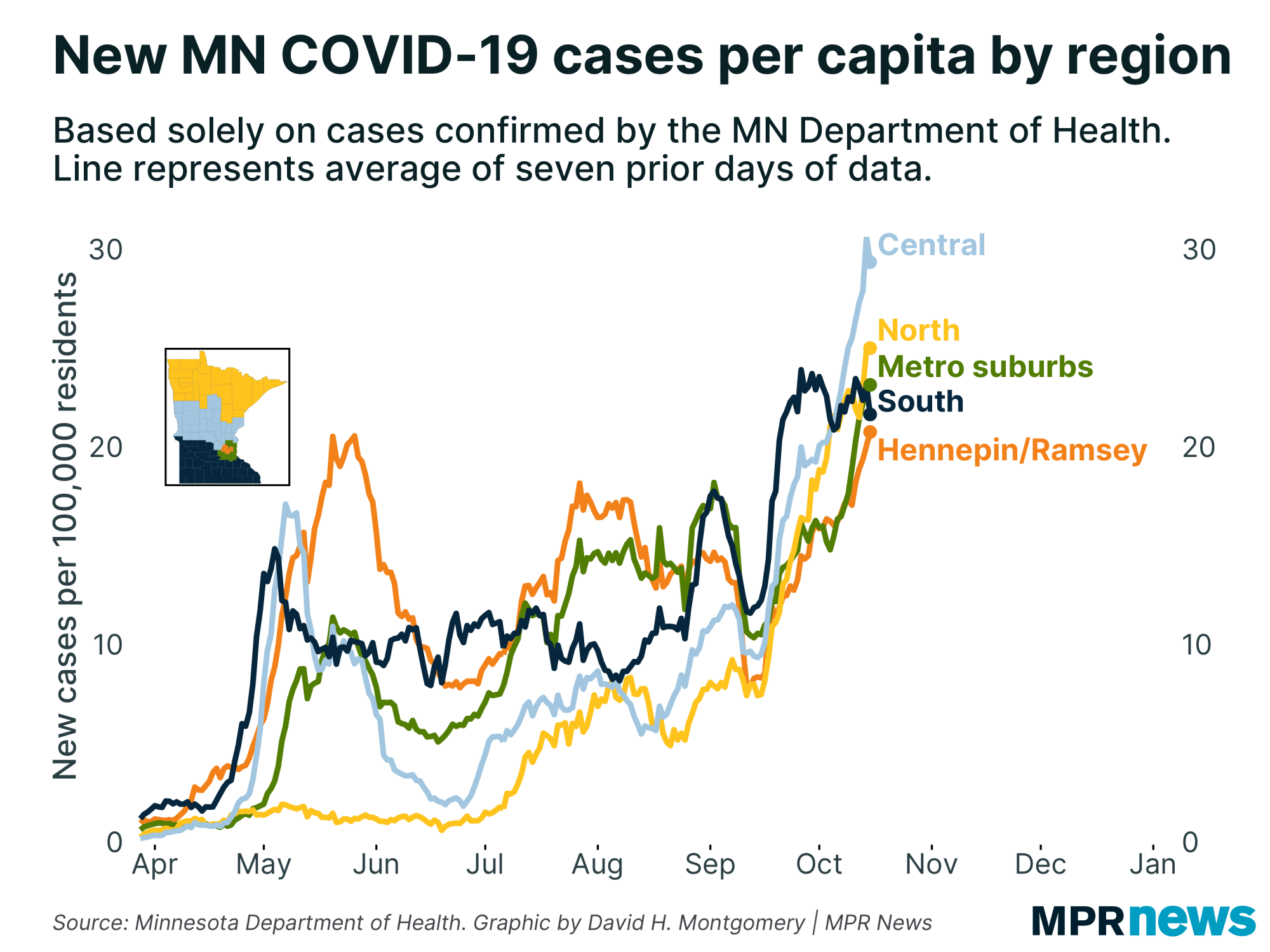 “The hottest of our hot spots are outside the metro area,” Ehresmann said Friday. That includes Martin and Pipestone counties in southern Minnesota, where positive test rates are hitting 10 percent, about twice the statewide average.

Ehresmann implored Minnesotans again to wear masks in indoor public gathering spaces, socially distance and stay home if they don’t feel well. “People in greater Minnesota,” she added, “they have it within their control to make things better.” 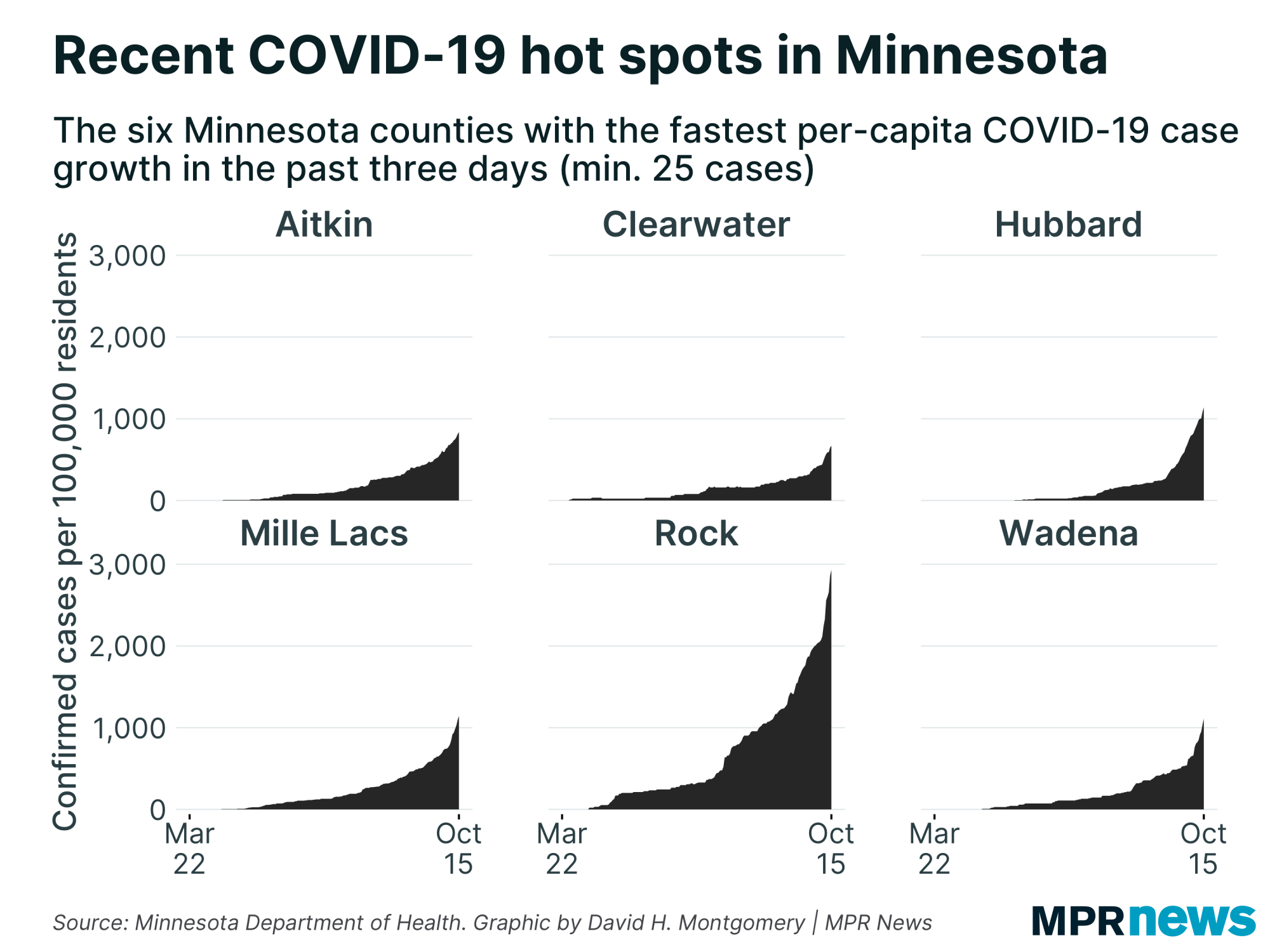 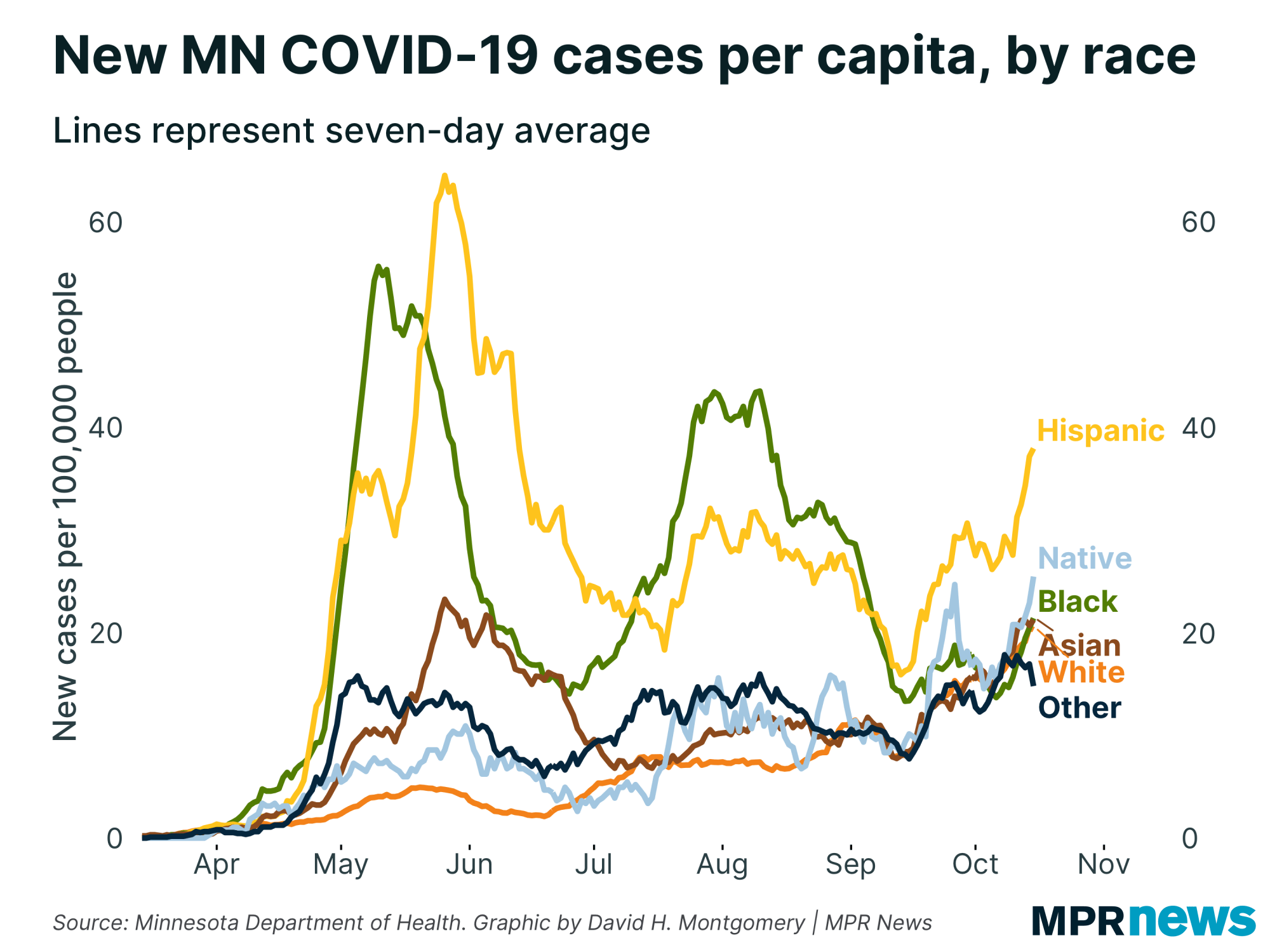 The Minnesota Department of Health and local officials are offering another round of free COVID-19 testing sites around the state this week.

For more details on times and testing locations — and to sign up for an appointment — go to the MDH website.

Health Department officials say they are trying to be proactive as COVID-19 cases continue to surge around the state. They say that they're especially concerned about a growing spread of the coronavirus throughout greater Minnesota.

Saliva testing will be available to anyone who wants it or thinks they need it. So far more than 7,000 people have completed saliva testing at the first site in Duluth. State officials plan to open as many as eight more sites across the state in the coming weeks.

The Winona testing site will be open five days a week, from Wednesday through Sunday. Find more information here.

National Guard tapped to fill staffing gap at Austin care facility: Staffing problems at Austin’s Sacred Heart Care Center started near the end of August, with the problem getting worse and worse over the course of several weeks until the facility needed help having enough care workers.

Close-knit St. John’s monks seek space to stay safe in pandemic: The monks share close quarters. They eat together three times a day and pray together four times a day. And many are still actively involved in teaching and ministry outside the abbey — at the university or in local parishes. When COVID-19 arrived, their close-knit community and collective way of life meant their most vulnerable members would be at risk.

Walz says loosening restrictions about 'striking a balance' between data, follow-through: The gobernor said he’s well aware that Minnesota is taking steps to relax precautions against spreading COVID-19, even as the pandemic widens in the state.

To read the original articles and see more COVID-19 reporting, follow this link to the MPR News website.  https://www.mprnews.org/story/2020/10/16/latest-on-covid19-in-mn