A Minnesota Department of Health contractor holds a vial and a nasal swab while talking to a participant at a COVID-19 drive-thru testing event Wednesday at the Itasca County Fairgrounds in Grand Rapids, Minn.  Photo: Derek Montgomery for MPR News

The number of newly confirmed COVID-19 cases reported in Minnesota on Sunday decreased from the previous day's record total.

But it remained above 1,000 for the third consecutive day, the first time that's happened in Minnesota during the ongoing pandemic.

That comes as testing also remains at a high level — with Sunday marking the third consecutive day with more than 26,000 results reported, also a first for the pandemic in Minnesota. The rate of positive tests dropped on Sunday after climbing slightly over the previous few days.

The Minnesota Department of Health on Sunday reported four more deaths from COVID-19 — one of them a resident of a long-term care facility, and three of them people who were living in private residences. Minnesota's COVID-19 death toll now stands at 2,008, after having passed 2,000 deaths on Saturday.

The number of Minnesotans newly admitted to hospitals for COVID-19 treatment dropped slightly, but the number of new COVID-19 admissions to ICUs continued to climb.

The number of active confirmed COVID-19 cases in the state climbed to 8,474 — another record for Minnesota. 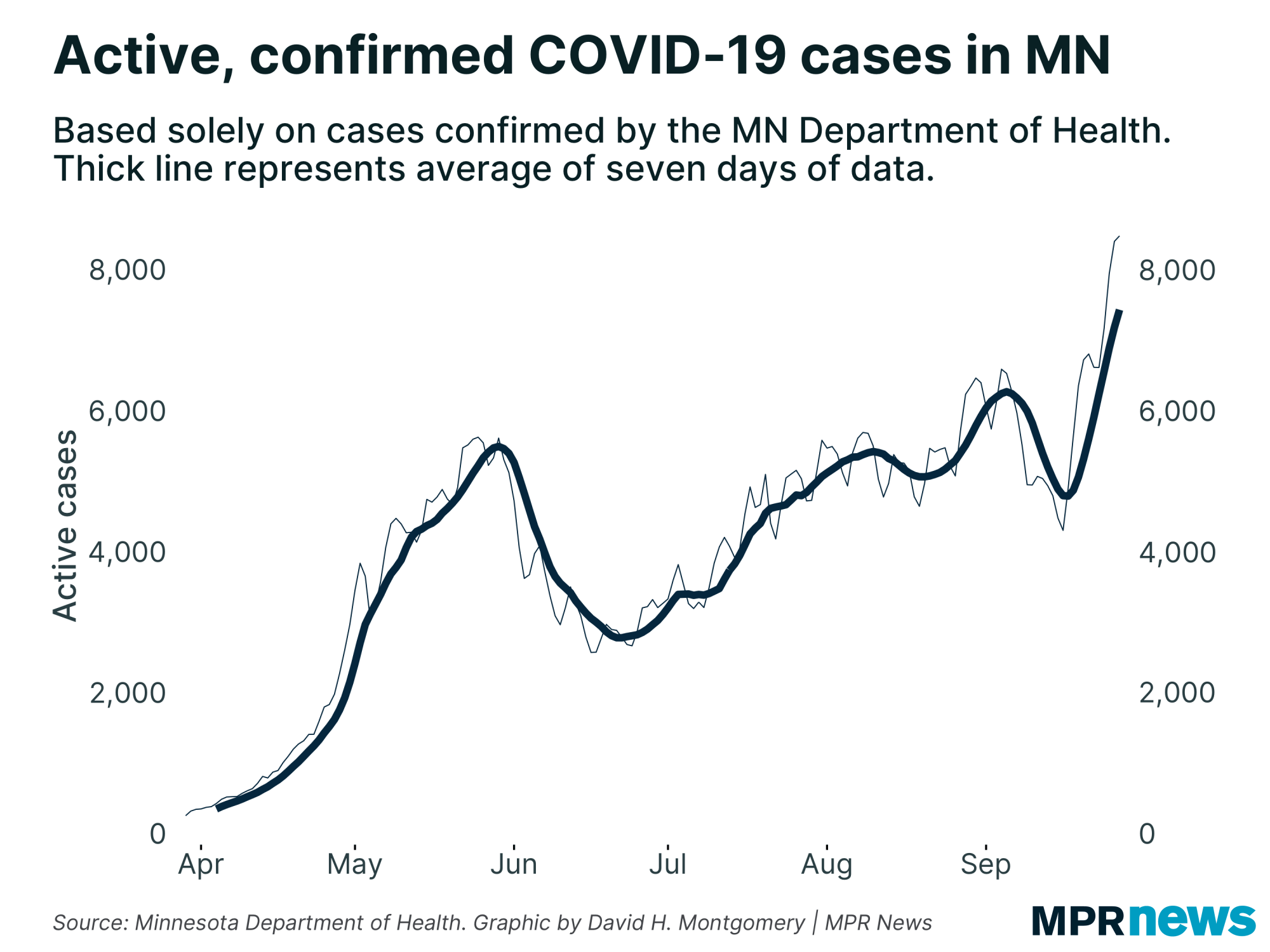 Rising case counts and other data paint a picture indicating the pandemic is far from over, a point public health authorities have been hammering at for weeks as they implore Minnesotans to wear masks in indoor public spaces, socially distance, wash their hands and generally stay out of crowds to curb the disease’s community spread.

Spread is being driven largely now by weddings, funerals and informal get-togethers among friends and families who are not staying vigilant against the disease, Kris Ehresmann, the state’s infectious disease director, said Friday.

While daily death counts have eased since the spring, “the virus is still dangerous,” she said. “COVID did not magically go away or get to be a better virus over the last few months.” 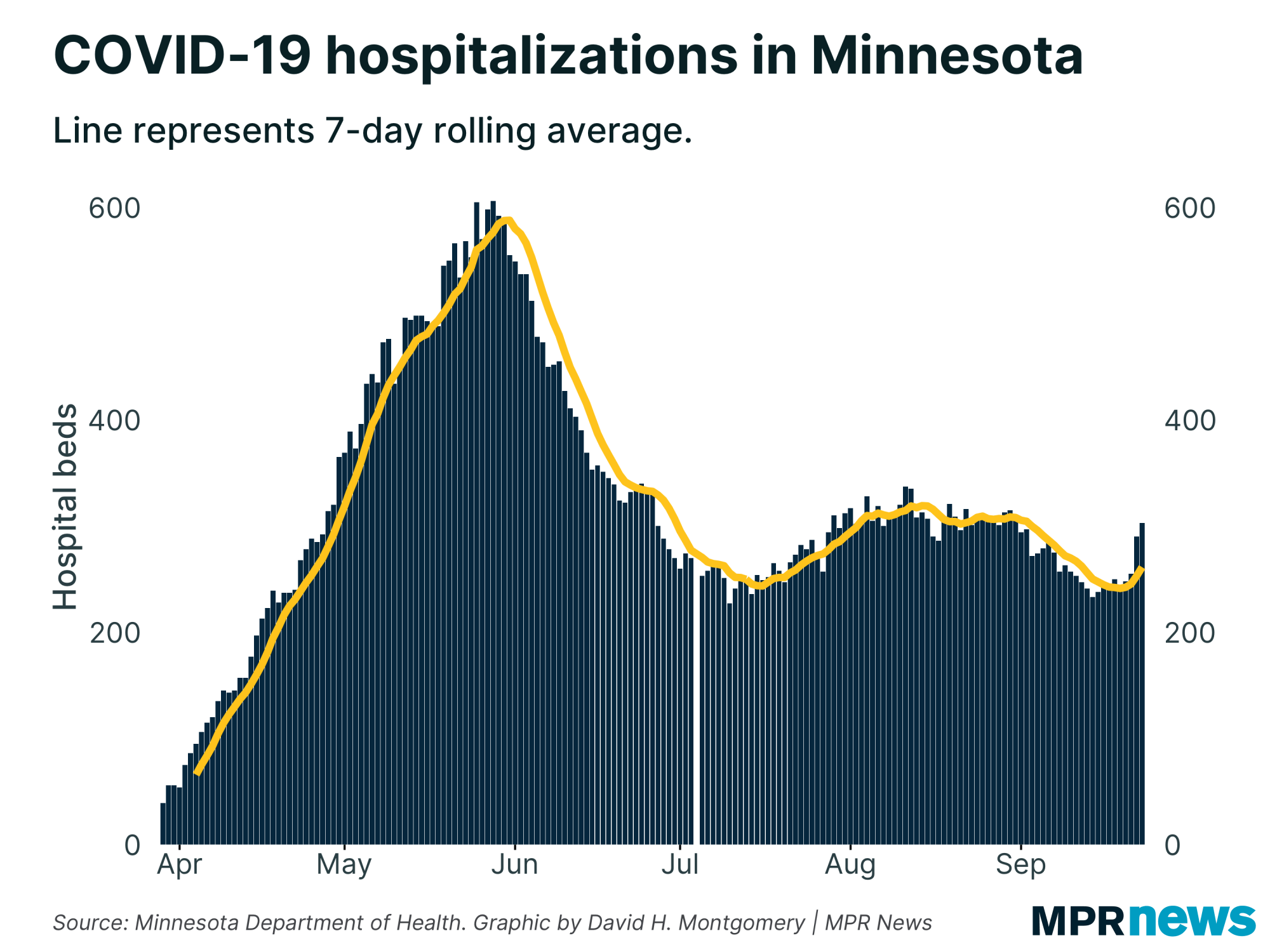 People in their 20s make up the age bracket with the state’s largest number of confirmed cases — surpassing 22,000 since the pandemic began, including more than 13,100 infections among people ages 20-24. 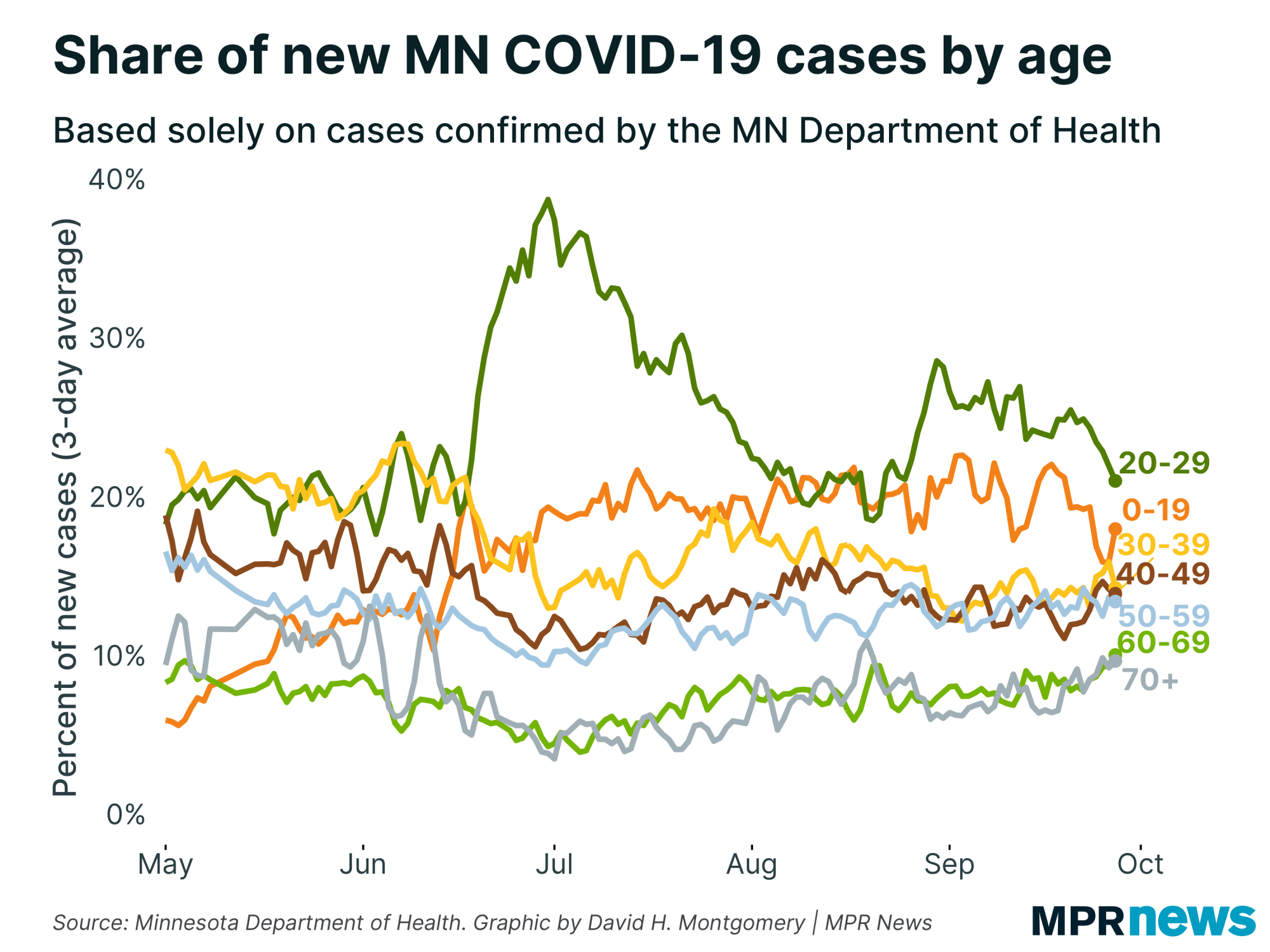 The number of high school-age children confirmed with the disease has also grown, with more than 9,000 total cases among children ages 15 to 19 since the pandemic began.

With many schools in Minnesota attempting to teach in-person, officials say they are especially concerned about the rising numbers of teens becoming infected and how that could affect decisions to keep school buildings open. 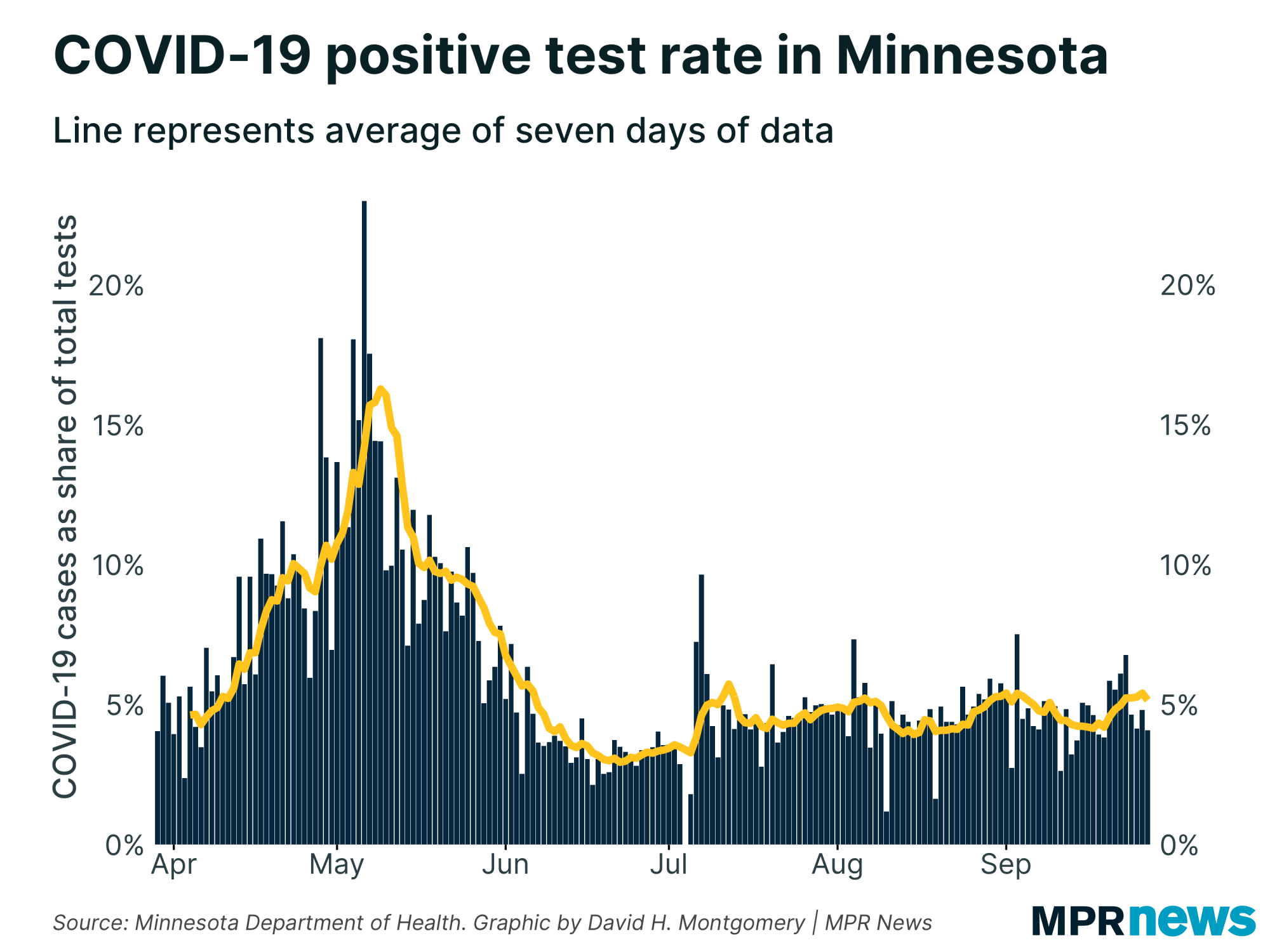 “We’re very concerned about what we’re seeing in the data. Educators have worked very hard to create a safe working plan, but the plan only works if we’re working together,” Ehresmann said Wednesday, adding that “it won’t be too much longer until many schools have difficult decisions to make.”

‘Virus doesn’t care where the state line is’

Regionally, southern and central Minnesota and the Twin Cities suburbs have driven much of the increase in new cases while Hennepin and Ramsey counties show some of the slowest case growth in the state. 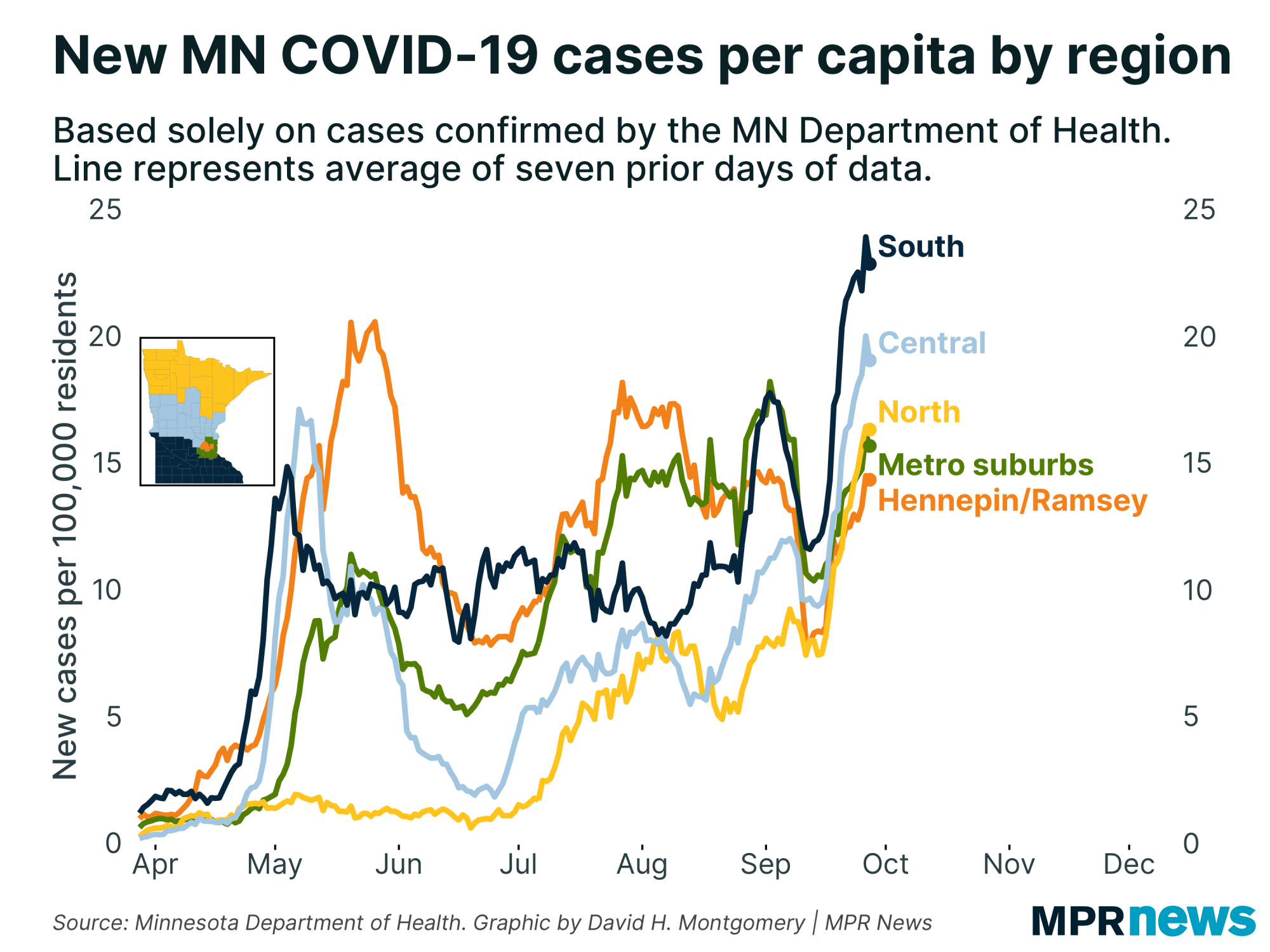 Hot spots have included southwestern Minnesota, where at least 75 cases have been traced to a late-August wedding in Lyon County that officials describe now as the state’s largest single social spreader event.

On Wednesday, Ehresmann said investigators have identified 35 cases tied directly to a recent funeral in Martin County, and they expected to find more. Seventeen other cases are linked to the church where the funeral services were held, including cases among church staff. 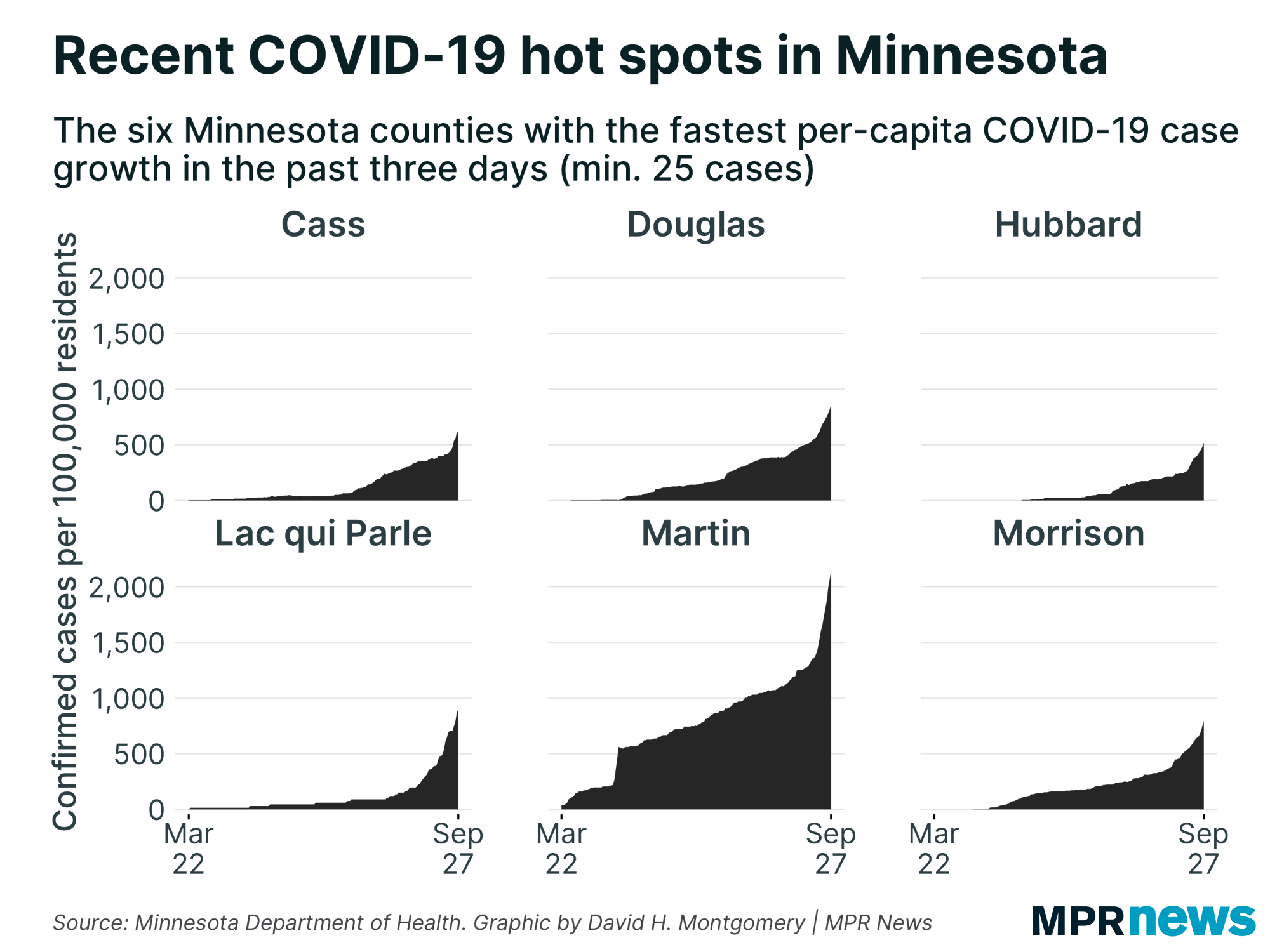 Southeastern Minnesota, specifically Winona, has been another hot spot as students return to college at Winona State and other schools. The problem has been compounded by similar outbreaks nearby across the Mississippi River at the University of Wisconsin-La Crosse.

The virus doesn’t care where the state line is,” Ehresmann said. “The virus cares about where people are gathering together.”

Schiltz sharply challenged lawyer Erick Kaardal, who brought the case, over his contention that the mandate conflicts with another law making it illegal for people to conceal their identity with a mask or another disguise.

Kaardal said the two directives need to be reconciled.

“The court represents ordinary people. How would ordinary people interpret this?” Kaardal said. “It looks to me like the state Legislature didn’t want people concealing their identity in public.”

He filed the case on the grounds that the mask rules could have ramifications at polling places, but the legal effort goes far beyond that.

The judge and Kaardal had several tense exchanges during the nearly three-hour hearing. One came as discussion turned to whether the mask mandate violates First Amendment rights related to free expression.

“According to your logic, you’re unpatriotic if you don’t believe everyone should wear a mask everywhere,” Kaardal said to Schiltz.

“I didn’t and would never use the word ‘patriotic’ in an argument. It has nothing to do with the issues before me. That’s a moral judgment that it’s not my job to make,” Schiltz replied.

“I’m saying the logic of your position, Mr. Kaardal, is if there is a criminal law out there that says X is a crime and you have every way possible to express your opposition to that law. What your position is that you also have a First Amendment right to express your opposition by violating that criminal law,” he continued. “I’m saying I’m unaware of any case that so holds.”

Schiltz didn’t rule on any matters in the case but told attorneys, including for the government entities named as defendants, that he was leaning against impeding the mask requirement on constitutional grounds.

The case is one of several pending challenges to executive actions Walz has taken to respond to COVID-19’s spread.

The evolving COVID-19 pandemic in Minnesota continues to change school reopening recommendations around the state.

The most recent batch of recommendations, released Sept. 17, cover cases from Aug. 23 to Sept. 5 — a period that happened to see a late-August spike in new COVID-19 cases.

The result? A full 25 counties saw their COVID-19 case counts slip past one of the Health Department’s thresholds, changing their recommendation toward more distance learning for more students. 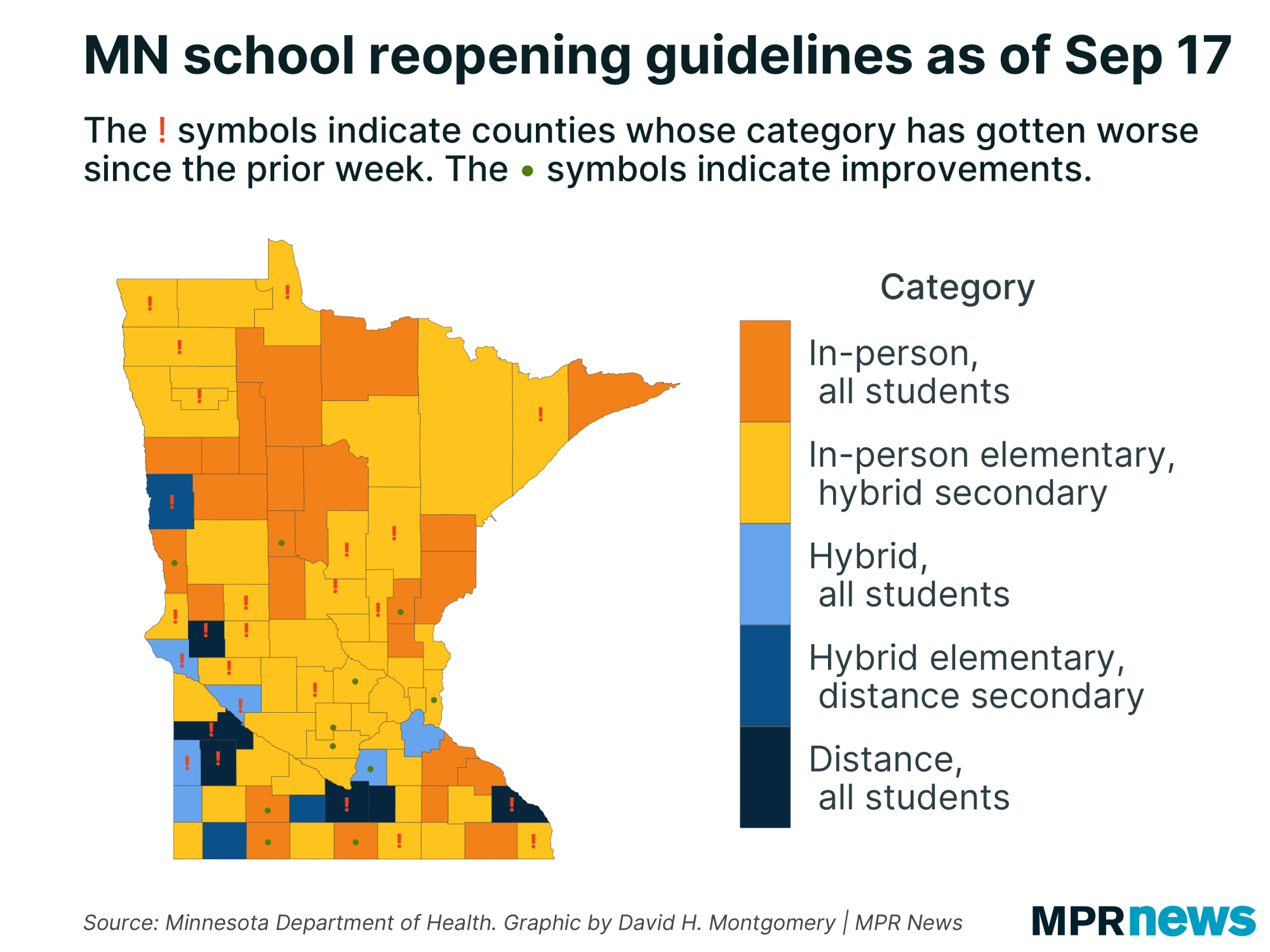 In the most recent update, six counties are recommended to have all students do full-time distance learning: Blue Earth, Lyon, Stevens, Waseca, Winona and Yellow Medicine counties. All but Waseca County were previously recommended to allow at least some in-person learning.

Not every county got worse. Eleven counties saw their case rates improve compared to last week’s results, and saw their recommendation shift to more in-person learning.

Overall, 24 largely rural counties have a recommendation of in-person for all students.

A formula produced by the Health Department generates the guidance for districts to help decide whether to have in-person learning, distance learning, or a mix, based on the rate of COVID-19 cases in that district’s county over a two-week period.

These recommendations are only considered the starting point for school districts, which make their own learning plans in cooperation with the Health Department. 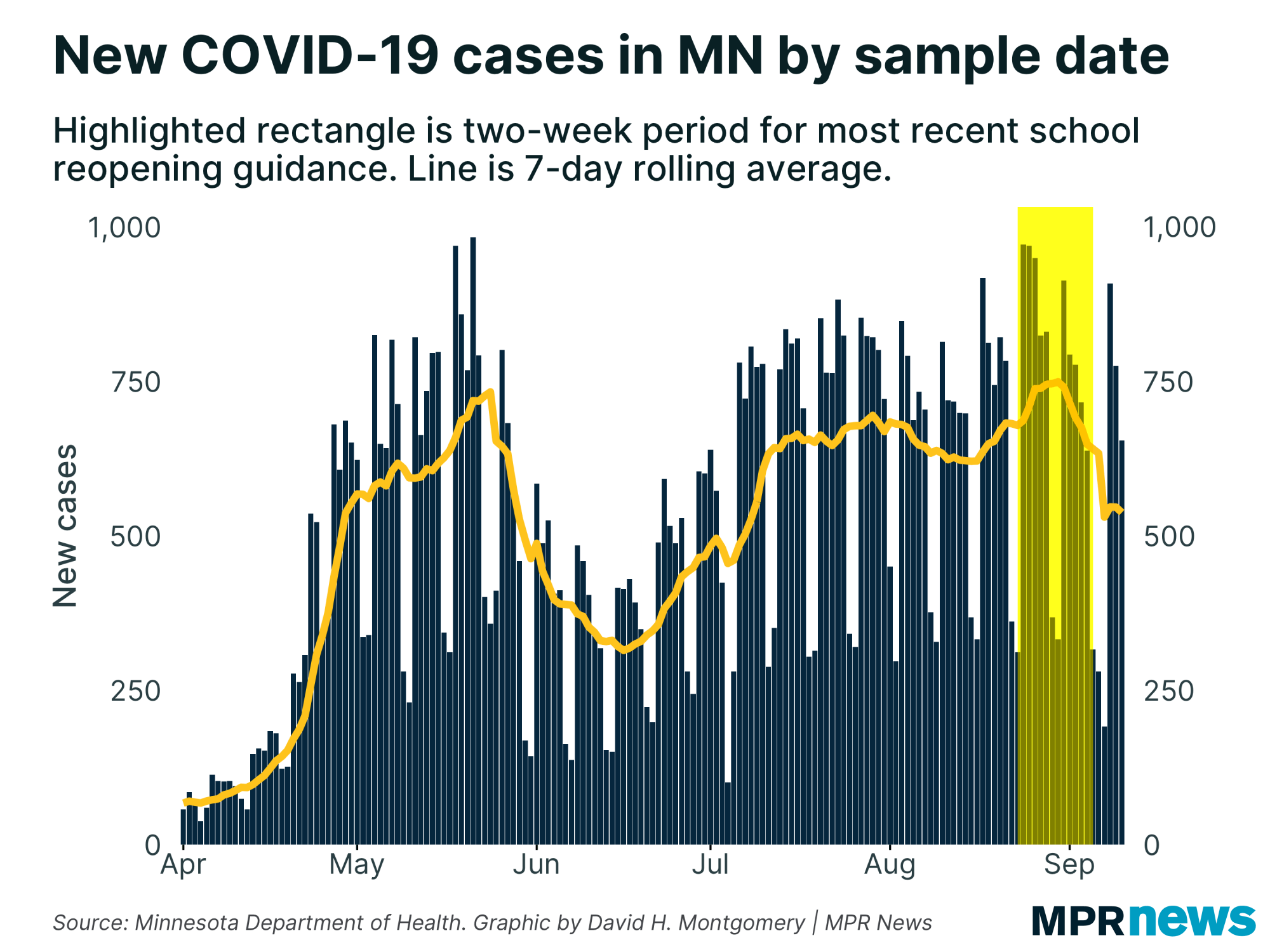 New COVID-19 cases, by the date the sample was taken, over the two-week period used for school reopening guidance.

Because Minnesota’s calculation uses weeks-old data and calculates cases by the day a person got tested rather than the day the tests were reported, this update is not affected by recent reporting delays caused by the Labor Day weekend.

Mayor of Minnesota city disputes MDH reports of health workers being threatened: The mayor of a southern Minnesota city is pushing back on state health department claims that a COVID-19 survey team was threatened there earlier this month.

To read the original articles and see more COVID-19 reporting, follow this link to the MPR News website.  https://www.mprnews.org/story/2020/09/27/latest-on-covid19-in-mn
Injuries