Latest on COVID-19 in MN: Still walking the 'edge of the cliff' Despite some recent hopeful trends in Minnesota’s COVID-19 data, state health officials are still prepping Minnesotans to expect a long road back to normalcy.

Hospitalizations are down and daily death counts are moderate. But new cases have been growing significantly for weeks, raising concerns that new cases now will create more severe health problems later.

Public health authorities have warned community spread, where the origin is not precisely known, is growing in Minnesota, driven by informal get-togethers, weddings, college student meetups and other social events where people aren’t wearing masks, socially distancing or taking other precautions.

“We just really continue to be concerned about the degree of virus that’s prevalent all over the state and the ease with which what’s been a pretty controlled situation could escalate further,” Health Commissioner Jan Malcolm told reporters Monday.

“The potential for going over the edge is still there,” she said.

Like their colleagues around the country, health authorities here are watching in the week ahead for any signs of a rise in infections tied to Labor Day weekend gatherings.

They’re asking parents to keep children at home when they’re sick, knowing how difficult that can be for many families, especially single-parent households. They're also asking employers to be understanding. 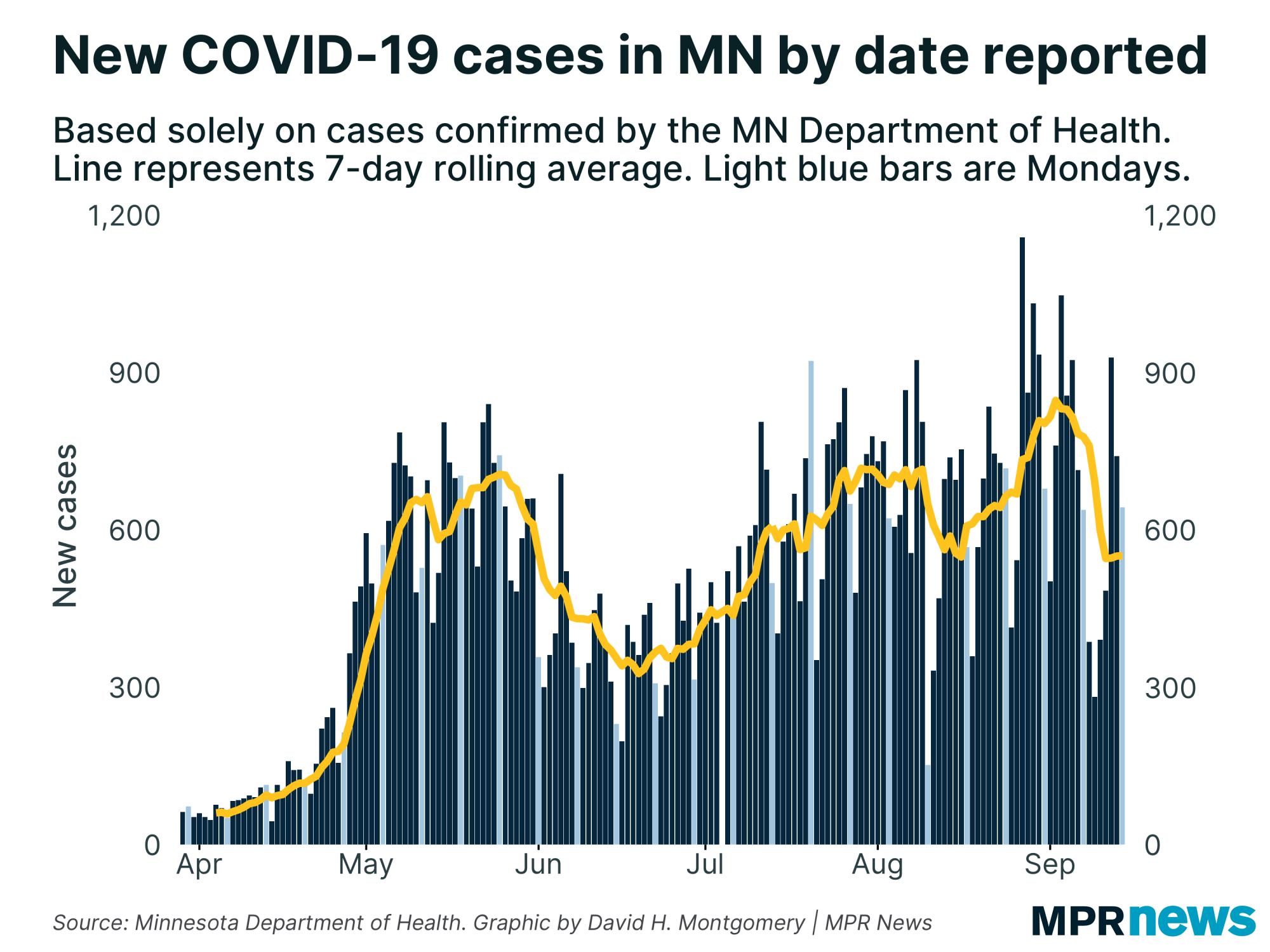 People in their 20s make up the age bracket with the state’s largest number of confirmed cases — nearly 20,000 since the pandemic began, including more than 11,000 among people ages 20-24.

While less likely to feel the worst effects of the disease, experts worry youth and young adults will spread it to grandparents and other vulnerable populations and could also hamper attempts to reopen campuses completely to in-person teaching.

They’ve been driving the recent outbreaks, although the number of high school-age children confirmed with the disease has also grown, topping 7,700 total cases for children 15 to 19 years old since the pandemic began. 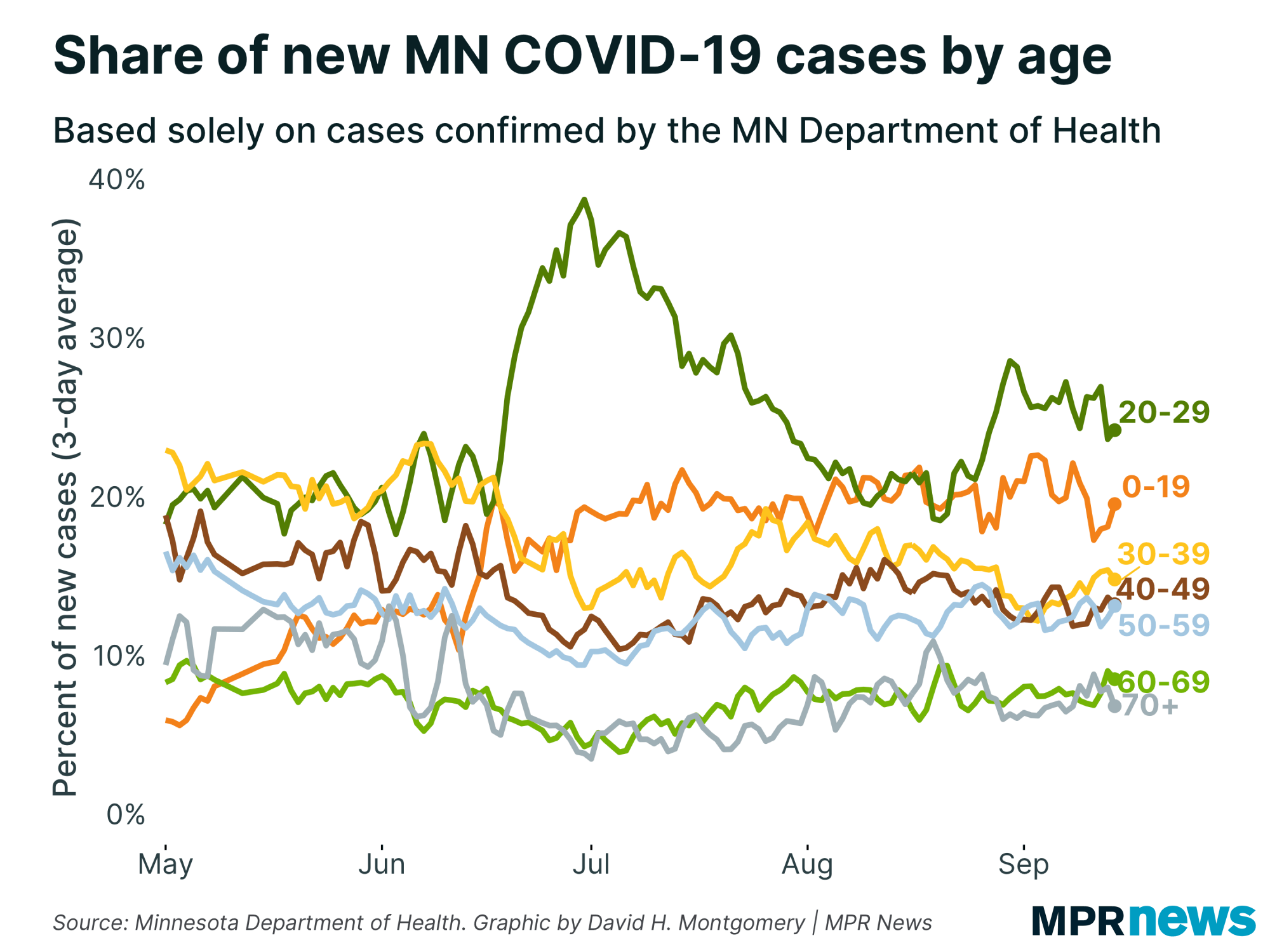 On Sunday, just across the border from Minnesota, the University of Wisconsin-La Crosse responded to rising cases by moving all in-person classes online, closing dining halls and most campus buildings, and mandating face coverings at all times on campus, indoors or outdoors.

Classes are suspended Monday and Tuesday before resuming online on Wednesday.

The move at UW-La Crosse followed a decision last week at nearby Winona State University in Minnesota to implement an immediate 14-day campus quarantine that will limit all nonessential activities on campus to slow the spread of COVID-19.

Winona State, Concordia College in Moorhead and Minnesota State University Mankato have each seen more than 100 cases tied to the schools and students in the last two weeks, Ehresmann said Monday.

Mankato is starting to see conditions improve, while it’s too early to evaluate moves made by Winona and Concordia to check the spread, she added.

Regionally, southern and central Minnesota and the Twin Cities suburbs have driven much of the increase in new cases while Hennepin and Ramsey counties show some of the slowest case growth in the state. 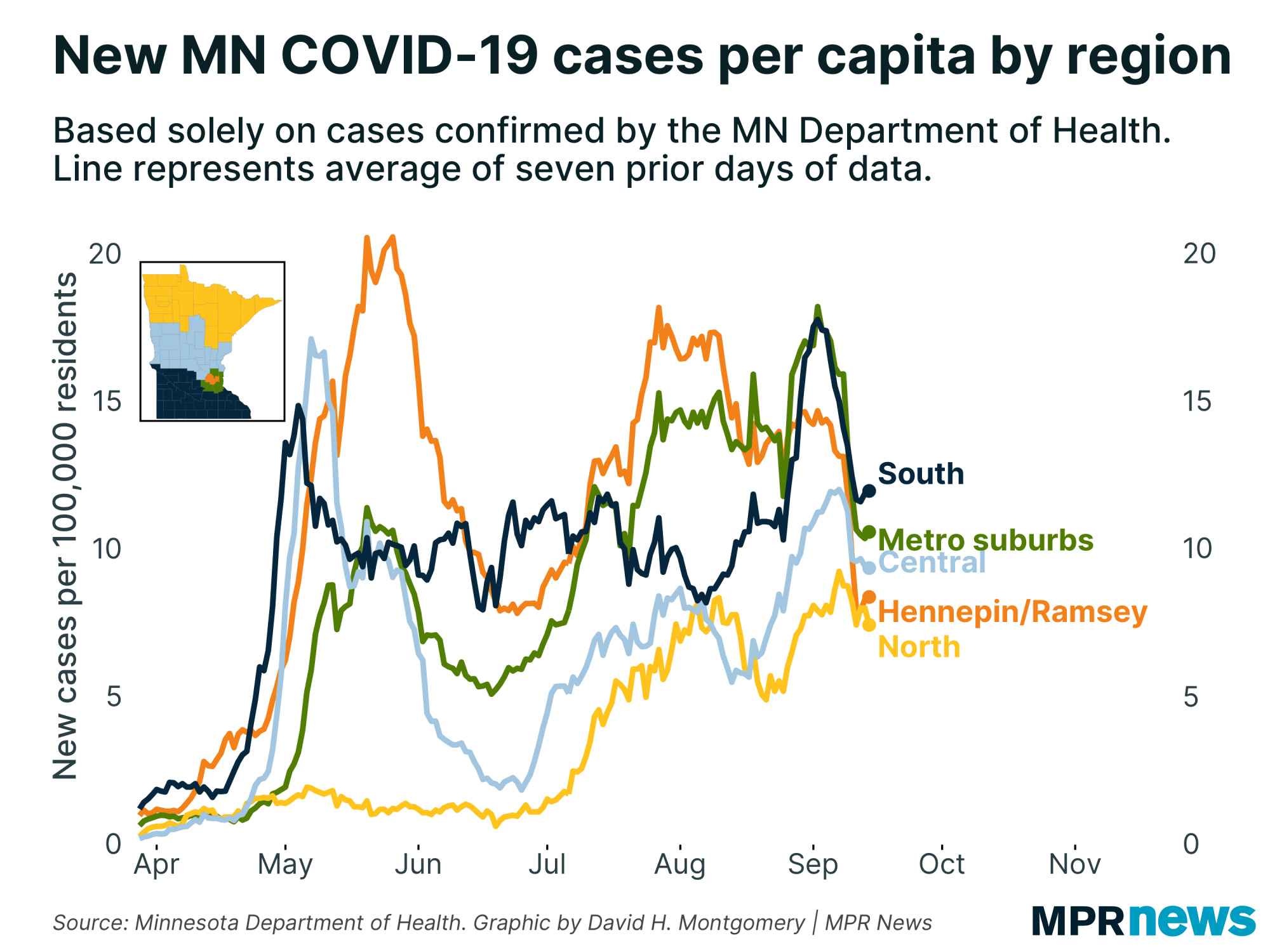 Hot spots have included southwestern Minnesota, where 75 cases have been traced to a late-August wedding in Lyon County that officials describe now as the state’s largest single social spreader event.

On Monday, Minnesota officials also confirmed an outbreak of 122 cases at the federal women’s prison in Waseca, which they said began when federal authorities transferred people into the facility from outside the state who had COVID-19. 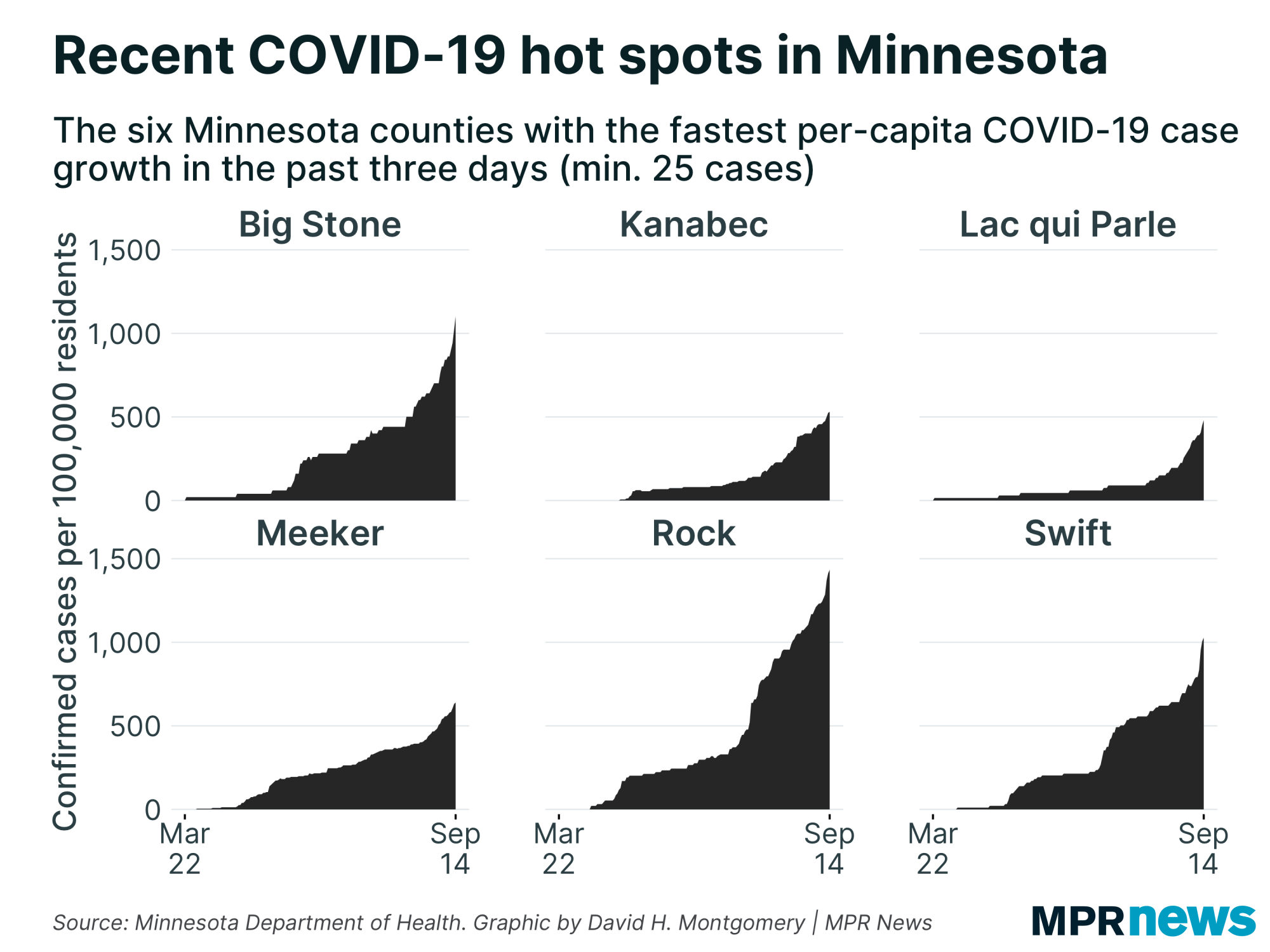 ‘Third or fourth inning’ of the pandemic?

While the decline in the number of people hospitalized is welcome news, Minnesota officials continue to implore people to stay vigilant against the spread of the disease.

They expect cases to climb following the Labor Day holiday and have warned that Minnesota could face a one-two punch this fall and winter from COVID-19 and the typical flu season.

State health officials on Monday morning made it clear that Minnesota remains in the early stages of the pandemic. In baseball terms, they see Minnesota’s as less than half way through the game.

"We’re in the third or fourth inning" of COVID-19, Malcolm told MPR News on Monday morning.

She and Ehresmann acknowledged that public perceptions of the pandemic have shifted since the spring with people losing patience with the curbs on daily life and the calls for vigilance.

Malcolm signaled it was unlikely the state would go back to the level of restrictions seen in March when public support for “dramatic actions” was widespread. The public now, she said, wants the state to take “more measured and precise actions.”

She added, though, that Gov. Tim Walz will “do what he feels is necessary to keep a handle on this pandemic.”

COVID-19 cases in Wisconsin have risen by two-thirds in the past two weeks, to the state’s highest-recorded levels.

On Sunday, Wisconsin reported more than 1,550 new confirmed cases, a new record for the state. It’s also more cases than Minnesota, Iowa, North Dakota or South Dakota have ever reported in a single day. Nor is it an outlier — Wisconsin’s number of new cases has been rising for two weeks, while its number of new tests has remained flat.

Adjusted for population, Wisconsin is averaging more than 200 new cases per million residents, twice as high as Minnesota. Though a record for Wisconsin, Iowa and both Dakotas saw significantly higher rates in late August. Since late August, Iowa and South Dakota have seen their cases fall, while North Dakota continues to report high numbers of new cases per capita.

A group of parents rallied outside the governor's residence on Saturday evening in St. Paul to urge the Minnesota State High School League to allow football and volleyball this fall.

The league approved a plan in August pushing the two popular fall sports to the spring with shorter schedules and other COVID-19 restrictions.

Dawn Gillman of Dassel, Minn., founded the group Let them Play MN; she said the Facebook group drew thousands of members in just a few days.

Gillman's two sons play high school football, and she said parents — not the league — should decide whether their children can compete this fall. Gillman said she is doubtful that a spring season will happen.

"Tell me if our ground is going to be thawed," she said. "The likelihood of us having a season in the spring is so small."

Other fall sports, such as soccer and cross country, started in mid-August with shortened seasons.

Federal jury trials set to resume in Minnesota: Monday’s case will unfold with a range of safety precautions in a St. Paul courtroom. Plexiglass panels have been erected between juror seats, and potential jurors have been screened for health risks.

To read the original stories and see more COVID-19 reporting, follow this link to the MPR News website.  https://www.mprnews.org/story/2020/09/15/latest-on-covid19-in-mn
Announcements