Ian Gill took this picture to show how close his tents (lower right) came to being struck by lightning in Quetico Provincial Park. The tree on the left with the bright line and the one beside it were hit by lightning and scarred during the July storm. Photos: Supplied by Ian Gill

A Thunder Bay family's knowledge of the outdoors saved them from serious injury when a bolt of lightning struck their Quetico Provincial Park campsite directly earlier this month.

Ian Gill and his family were camping in Quetico, near Pickerel Lake, on July 18 when the strike happened.

"We got a fire going, we started cooking up some walleye that we had caught," Gill said. "Then a storm started to approach, and it was an electrical storm."

Gill said he and his wife have been going on canoe trips for years, and had knowledge of what to do to stay safe during an electrical storm.

"One of the first things that we did is we were just counting the distance, the time between the flash of lightning and then the sound of the thunder," Gill said. "When the count got to about 10, we were talking about moving ourselves into a safer position."

As they moved into their tents, Gill said two lightning strikes happened close by.

"We got into our tents, and we're just aware that what we need to do is insulate ourselves from the ground," he said. "We had air mattresses when we got into the tent. We blew those air mattresses up as thickly as we could. We put light sleeping bags on top of those."

"And then we just tried to sit with the kids and, you know, reduce some of the anxiety. We played a game of cards, and we were in the tents for about a half an hour, when our camp site received a direct lightning strike."

There was a loud sizzling sound, followed by a "tremendous cracking sound," Gill said.

The noise was "deafening," and accompanied by a blinding flash of light, he said. 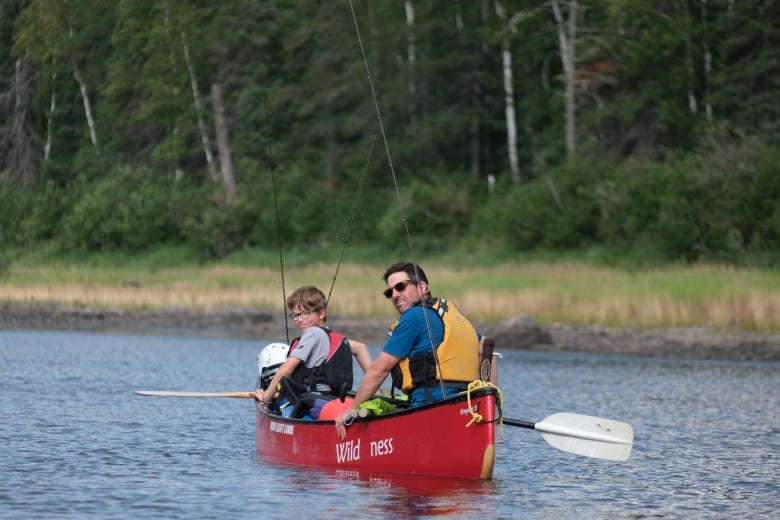 Ian Gill (yellow life jacket) and his family were on a canoe trip in Quetico Provincial Park when their campsite received a direct lightning strike. (Supplied by Ian Gill)

"Myself and my son were wearing headlamps," Gill said. "Those shorted out, so they went off, then they came back on again."

"We were all lifted off of our sleeping pads just a little bit," he said. "So we weren't really thrown. But there was certainly a sensation of being kind of jolted upwards."

"We all had headaches very instantly. And there was a smell of smoke … and ozone."

Everyone was okay, Gill said, including the members of a second family camped nearby.

The group waited for the rain to stop, then left their tents to take in what happened.

Two white pine trees, about 15 feet away, were split down their centres, their bark blown off.

A large crater was found at the bottom of the trees, Gill said.

The lightning, he said, "had then made its way through the roots of the tree in different directions and one of those big roots went directly down towards our tents." 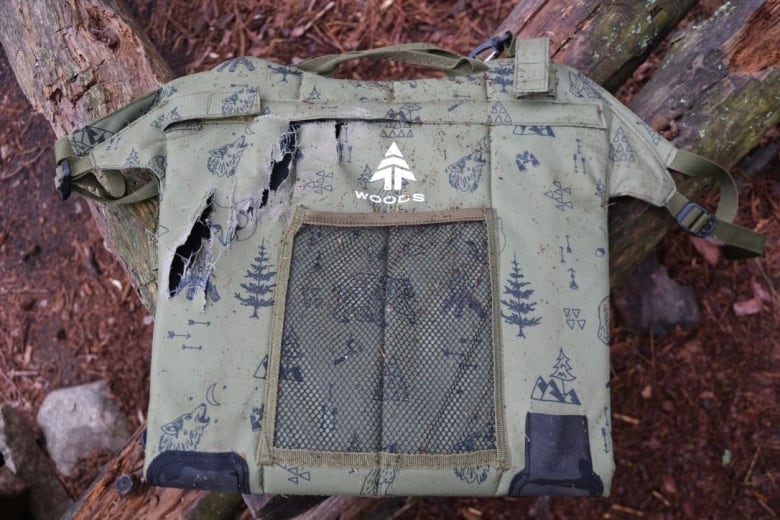 Ian Gill of Thunder Bay, Ont., was on a family canoe trip in Quetico Provincial Park when their campsite was hit by lightning. This canoe chair was one of many pieces of equipment damaged by the strike. (Supplied by Ian Gill)

"The bark was blown off those roots," Gill said. " We later determined as we were taking our tents down that the current appeared to have gone underneath the tents, and certainly went through the poles of the tents."

"We could tell because all of the joints of the aluminum poles of the tent looked like they'd been welded, almost," he said. "And then about 50 paces away was our kitchen tarp, where we had been eating dinner, and I don't know how to describe it to you other than it truly looked as though a bomb had gone off. There was mud on everything and certain pieces of gear were shredded. My wife's gortex raincoat was torn into ribbons."

"It wasn't burnt. It was just shredded."

Other camping equipment, including some chairs, were damaged, and Gill said more, smaller craters were scattered around the site, where the charge had "exploded out of the ground" after running along the tree roots. 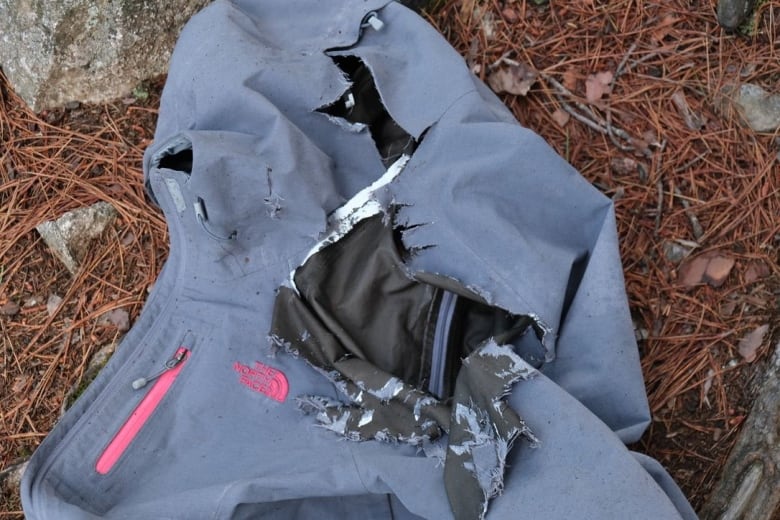 "The outcome could have certainly been different, and I'm not spending too much time on it, on those kinds of thoughts," he said. "But you know, when you take your kids out into the wilderness, you know, we all know, that there are certain risks associated with traveling in the wilderness, but you mitigate those risks to the extent that you can, and you use your judgment and your experience."

"I truly feel that the fact that we were in our tents ... we weren't touching any conductive material, and that we were insulated from the ground literally saved us from at least serious injury, if not worse."

Gill said as scary as the incident was, it won't stop him from going back into the woods. 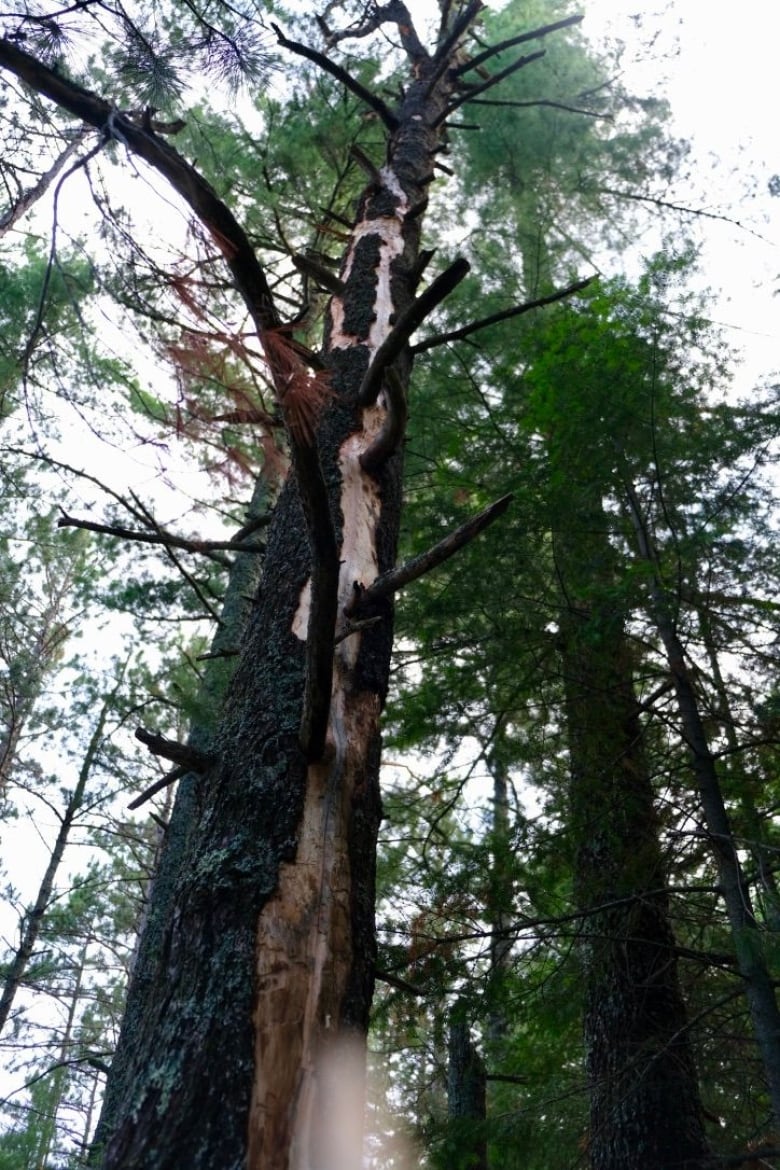 While Ian Gill and his family were on a canoe trip in Quetico Provincial Park their campsite was hit by lightning. A nearby tree was heavily damaged. (Supplied by Ian Gill )

"Connection with nature is important," he said. "So no, it certainly won't stop me. But, you know, I will be just that much more mindful next time."

"And I'm sure there will be a next time when I'm in an electrical storm," Gill said. "Let's hope that lightning doesn't strike twice in my lifetime."

To read the original article and see related outdoors reporting, follow this link to the CBC News website.  https://www.cbc.ca/news/canada/thunder-bay/lightning-strke-1.5662439