Saturday's report from the Minnesota Department of Health showed 805 new cases from nearly 18,000 completed tests. The rate of positive tests was 4.5 percent — similar to the previous few days.

The report also showed, for the first time, a case in northern Minnesota’s Lake of the Woods County — meaning COVID-19 cases have been confirmed in all 87 Minnesota counties.

Minnesota's overall confirmed case count now stands at 50,291, though officials say the actual number of cases is much higher.

Five more deaths from COVID-19 were reported on Saturday; four of them were people who lived in long-term care facilities. The state's death toll now stands at 1,571.

The number of people in Minnesota hospitalized due to COVID-19 increased to 287, up from 278 in Friday's report. That's the highest number so far in July, though still less than half of the peak seen in May.

The number of those patients being treated in ICUs also increased to 115, up from 108 on Friday. 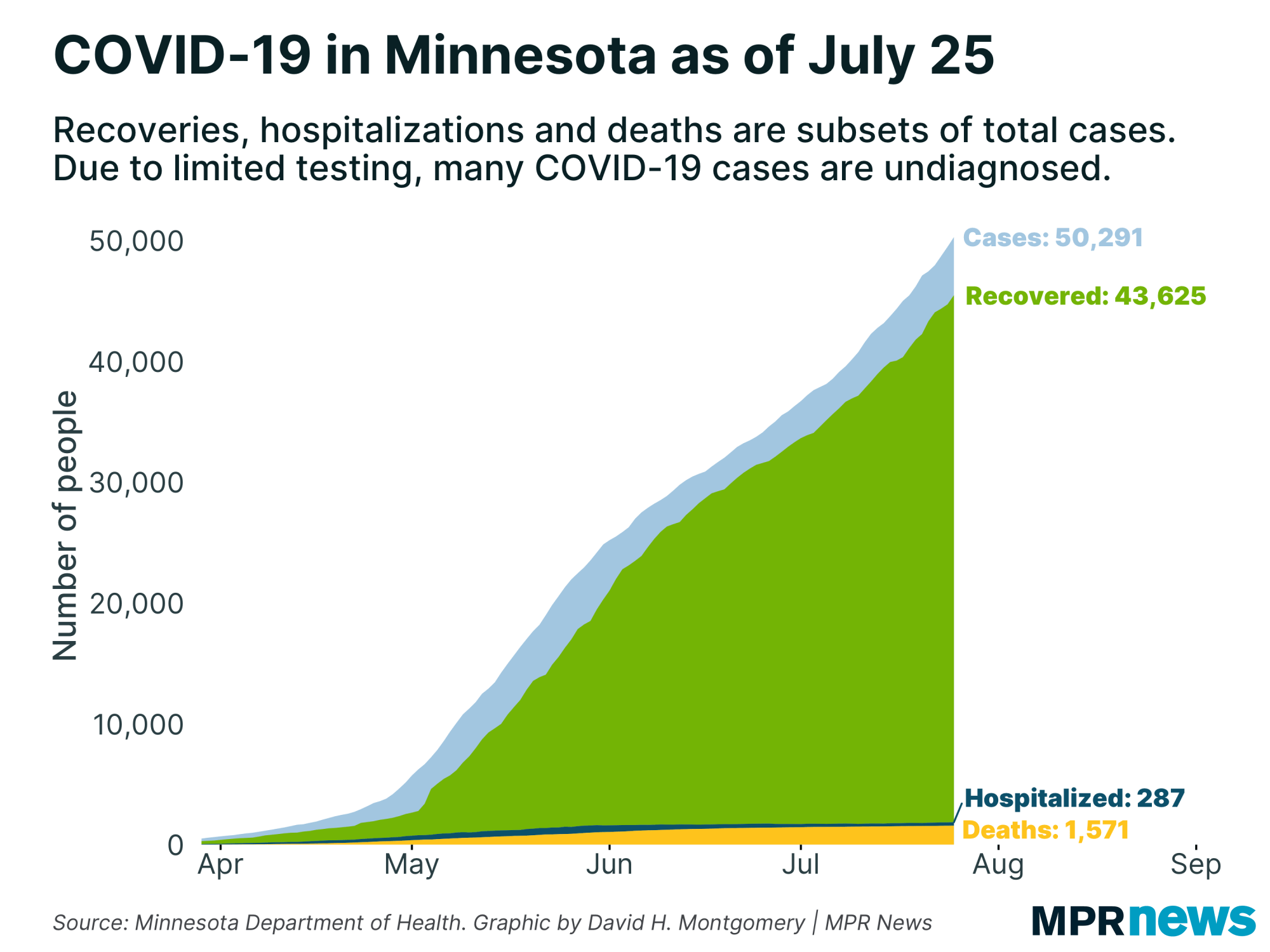 Walz on Wednesday announced a statewide mask mandate as a way to stem the spread of COVID-19 and put the state on a path back to normalcy. 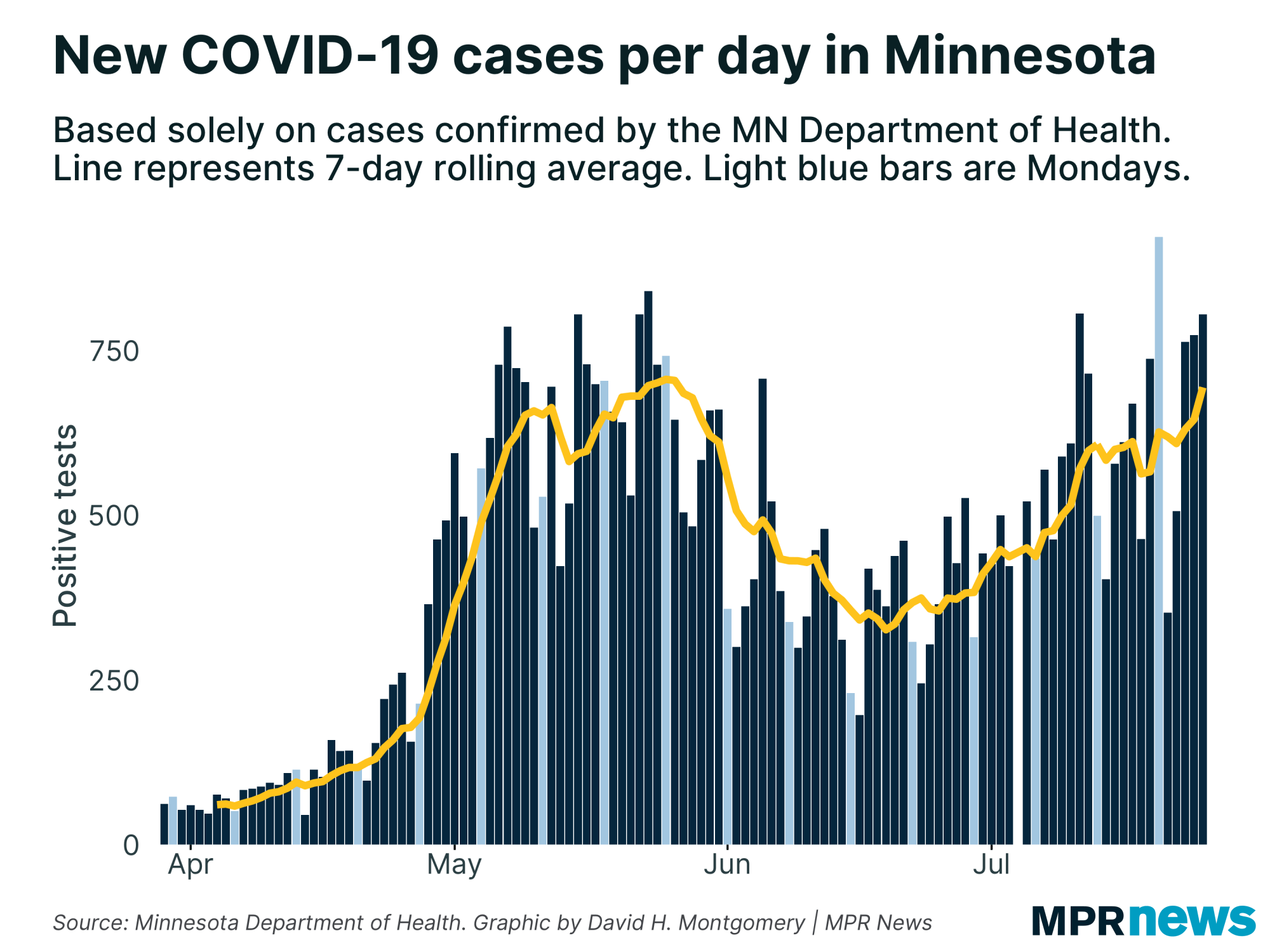 Kris Ehresmann, the state’s infectious disease director, on Friday said it would be several weeks before officials could assess the impact of Minnesota's new mask mandate.

“We kind of look at a 21-day window,” she said during Friday’s briefing. “We really are hoping, based on what's been seen in other locations, that we're going to see the positive impact of this mandate — but it won't be instantaneous.”

Walz compared the inconvenience of wearing a mask to wearing seat belts in cars and preventing smoking in indoor spaces, changes in behavior required by government that ultimately saved lives. “This is a small sacrifice for a potential big gain,” he said.

The state is working now with local chambers of commerce around the state to make masks available to businesses to give to customers who don’t have one.

Officials don’t want businesses to be in a position of being “mask police,” said Steve Grove, commissioner of the Department of Employment and Economic Development. 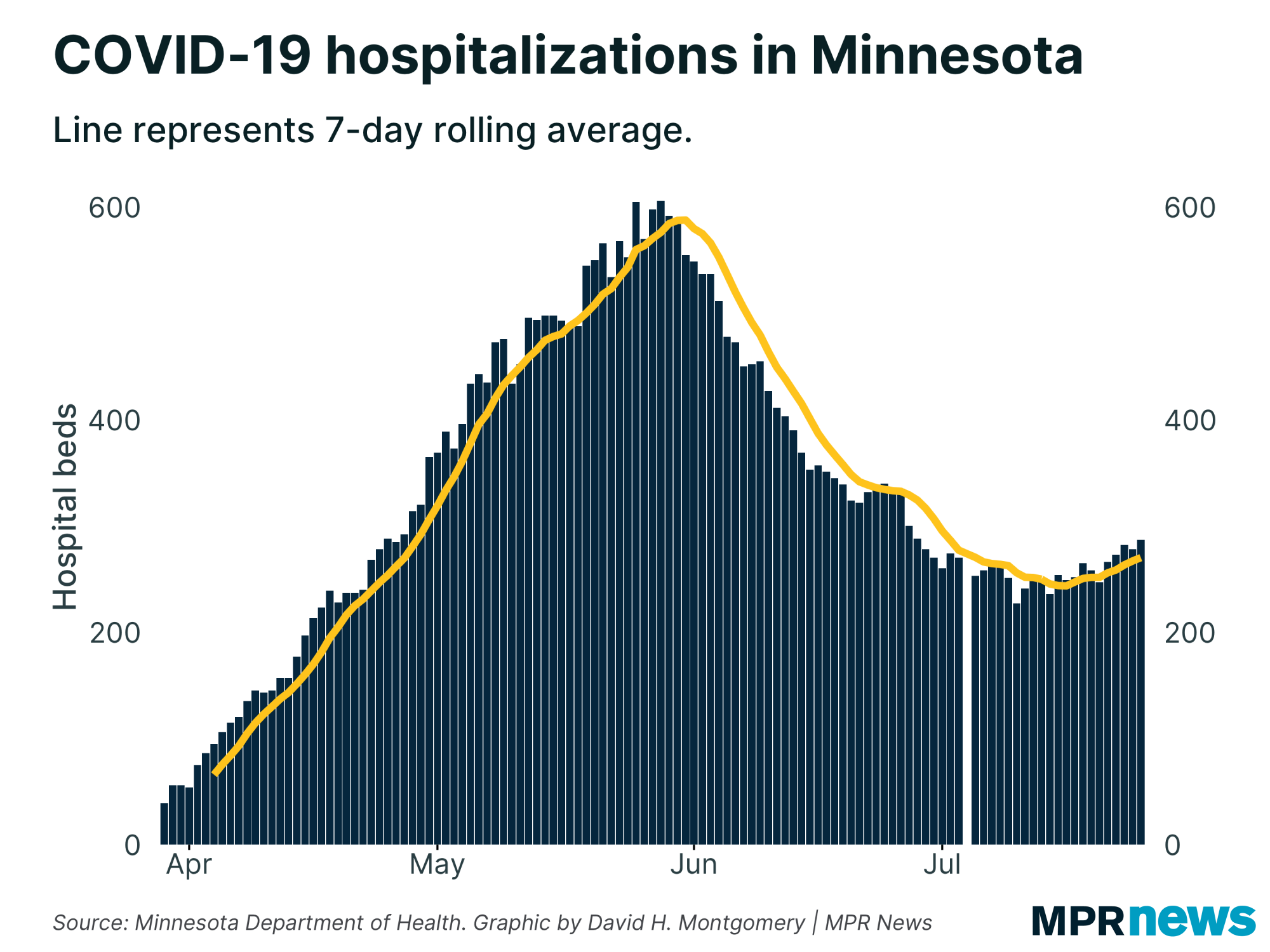 State health officials continue to worry about the recent spike of coronavirus cases in younger Minnesotans, including that those infected will inadvertently spread the virus to grandparents and other more vulnerable populations.

Minnesotans in their 20s now make up the age group with the most confirmed cases in the pandemic, with more than 11,600. The median age of Minnesotans infected has been trending down in recent weeks and is now 36 years old. 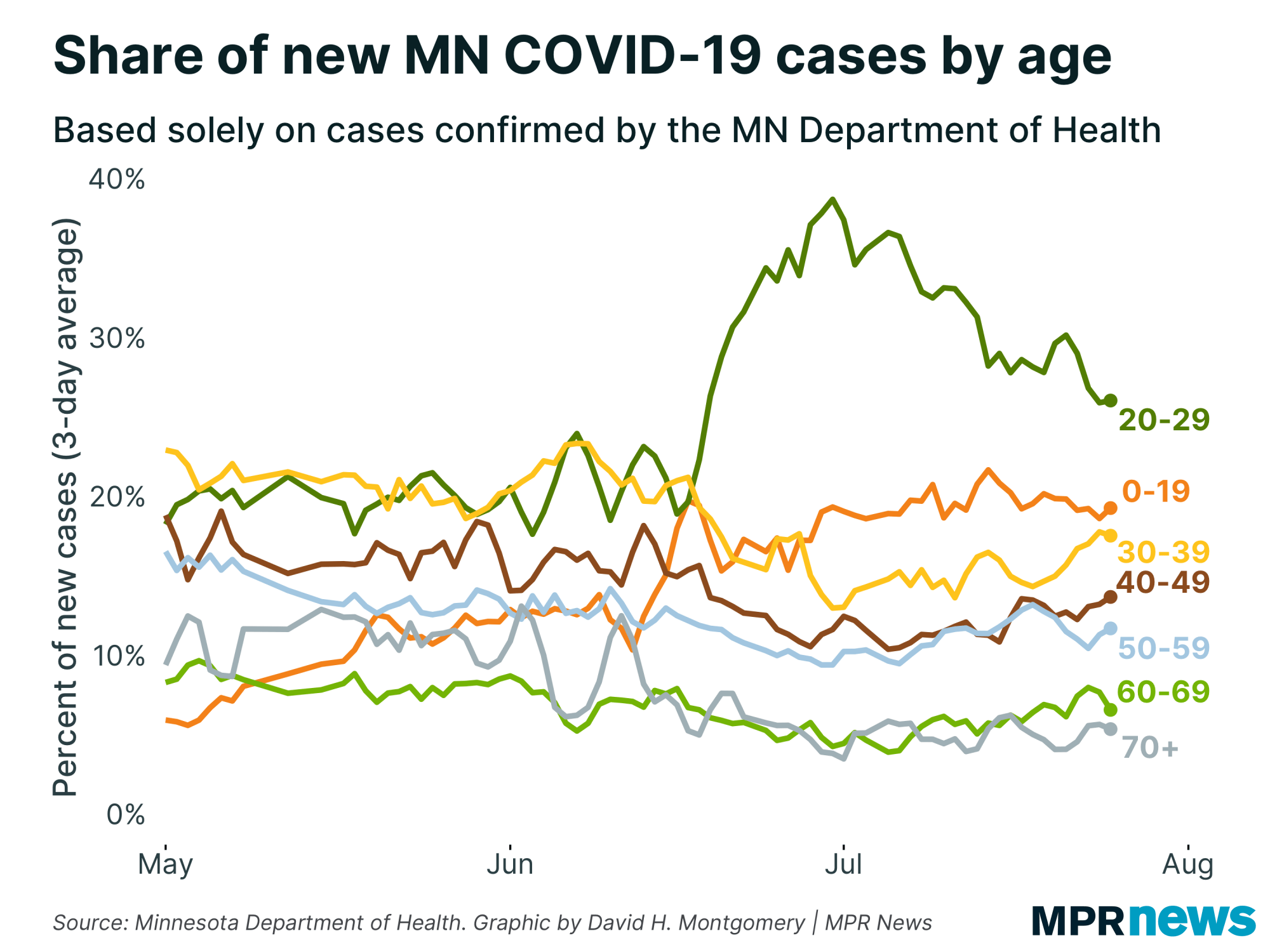 Health investigators are now starting to see more cases in 30- and 40-somethings as more people get together for family gatherings and summer fun without social distancing, Ehresmann said earlier in the week.

It’s not the same as the situation the past few weeks where people in their 20s meeting in bars drove the increases. Now, analysts are seeing an evolution in the “larger, gradual increase in social activities,” she added.

“Consider all the roles you play” in all daily interactions, she cautioned, noting that people who might not worry about themselves should worry about infecting vulnerable family members and coworkers.

Regionally, Friday’s newly reported cases were driven by the Twin Cities and its suburbs. The area is seeing both the most new cases and the fastest increases in growth rates. 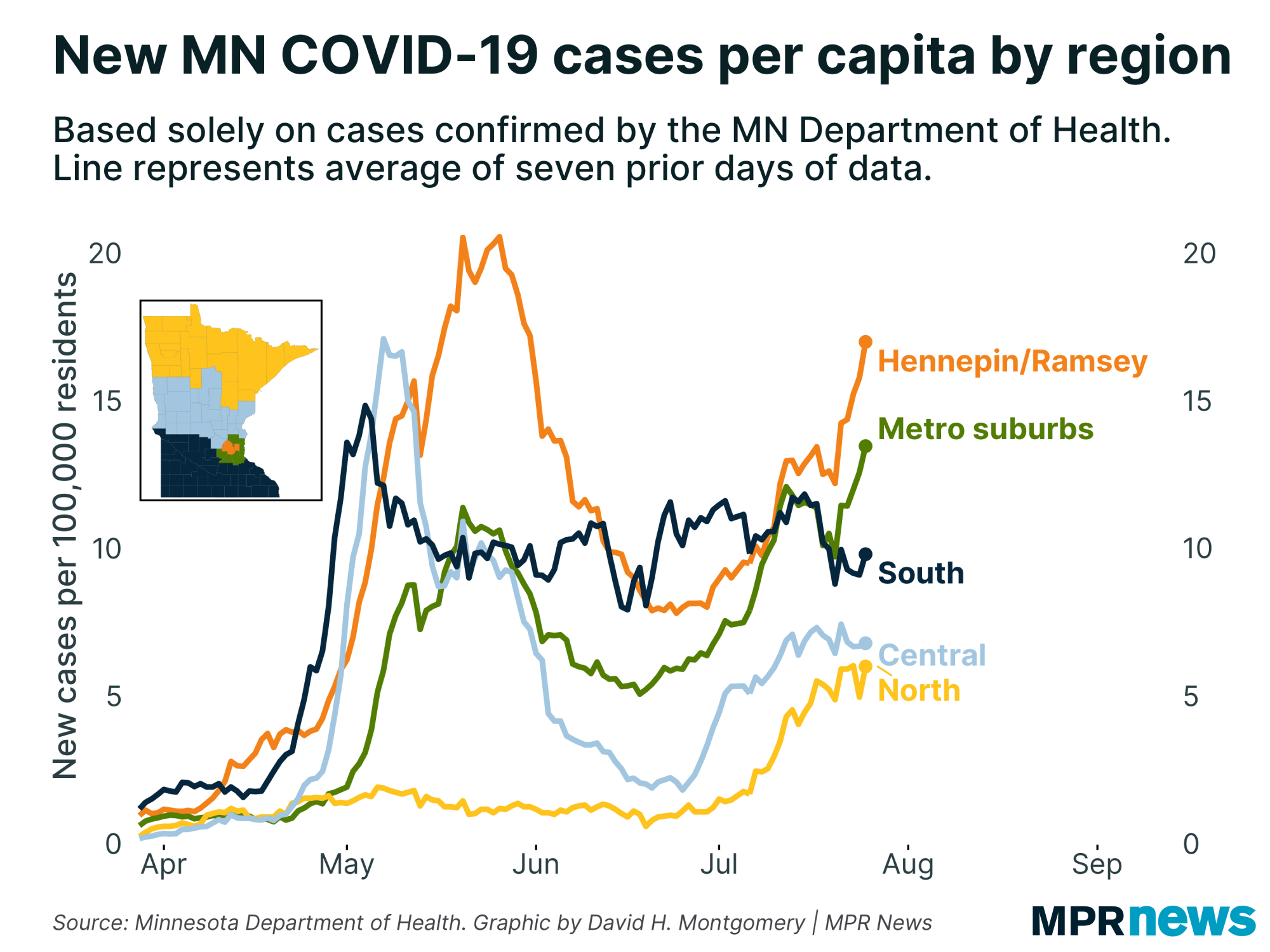 New cases have also been rising in northern Minnesota.

Cases in Beltrami County, home to Bemidji, have more than doubled in the past week and a half, from 53 to 122 on Friday.

Ehresmann this week said that case increase is tied to spread from athletic events and other public gatherings.

That includes Mower County in southeastern Minnesota, where there were 1,029 confirmed cases as of Friday. Mower County is home to Hormel Foods and Quality Pork Processors. Both have been partnering with Mayo Clinic to ramp up employee testing. 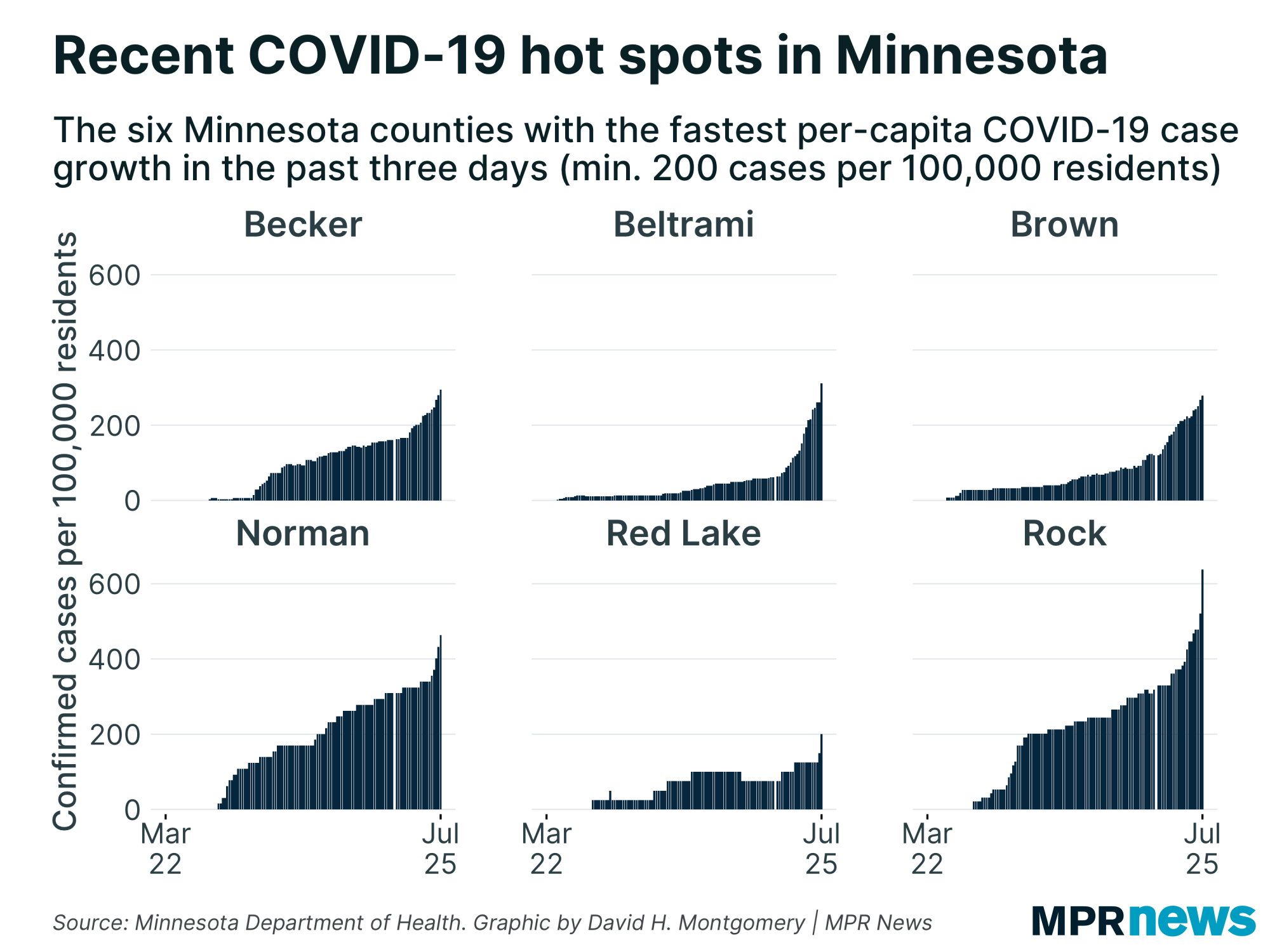 Nobles, in southwestern Minnesota, reported 1,721 confirmed cases as of Friday, with six deaths. About 1 in 13 people now have tested positive for COVID-19 in the county since the pandemic began, although the count of new cases has slowed considerably in recent weeks.

As of Friday, the Health Department reported 633 people have now tested positive. The county had confirmed three COVID-19 cases in late April.

Cases have also climbed noticeably in Lyon County (393 cases) around a turkey processor in Marshall.

The governor is expected to announce a plan next Thursday on bringing kids back into school buildings. The state Education Department has told school leaders to pretty much prepare for anything, including some combination of in-school and online instruction.

“Nobody wants kids in school more than me,” and state officials have been working for months on how to do that safely, Walz, a former high school teacher, said Tuesday. 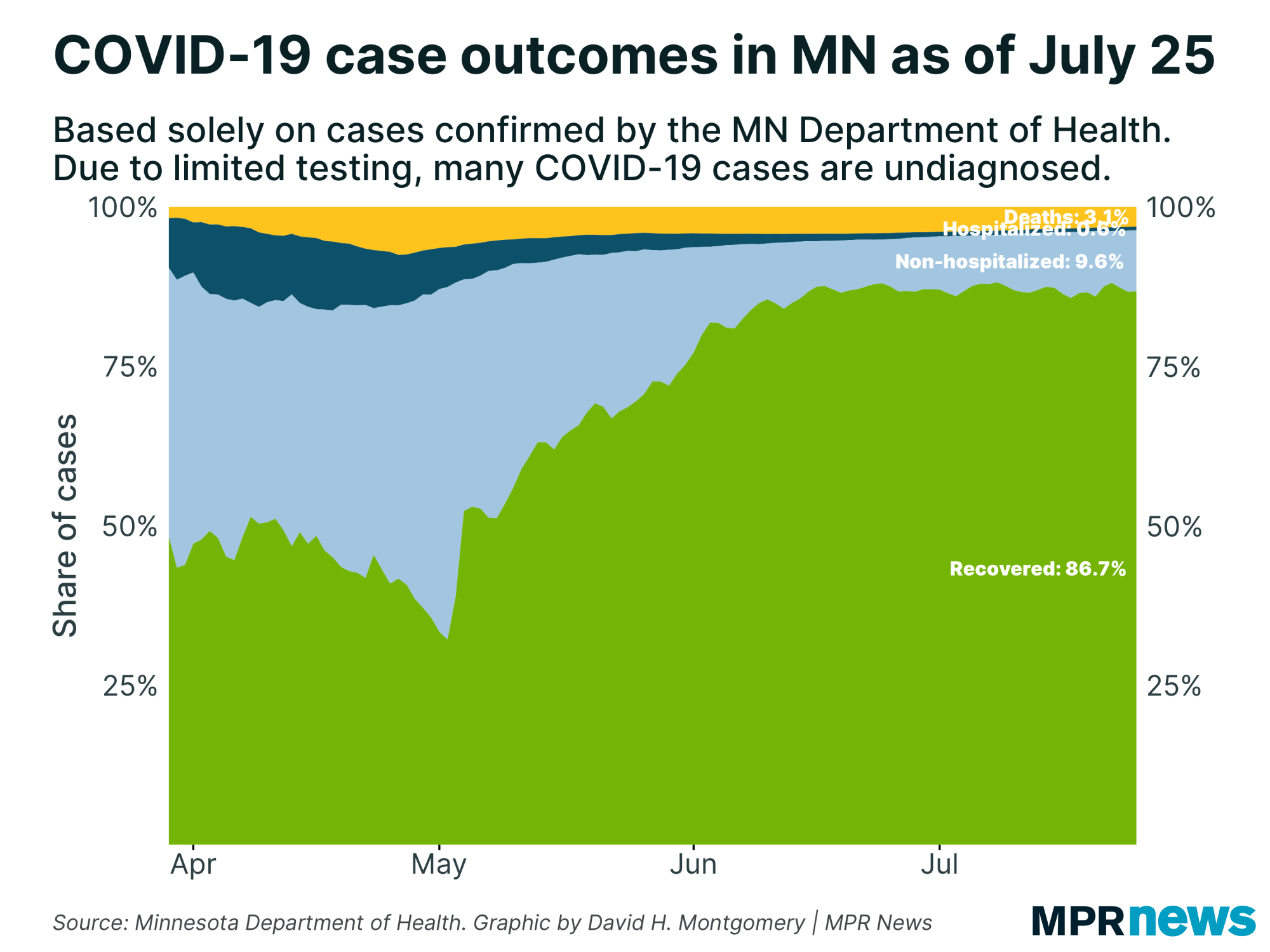 “We’re doing everything possible to get those kids back in those classrooms … to keep them there but also have some nimbleness” to move back to an online or hybrid model if cases start to climb, he said, adding: “This is gonna be a challenge.”

The DFL governor has suggested in recent days that there won’t be a uniform order that will determine whether school buildings reopen. On KFGO radio Friday, Walz reinforced that local decisions are important and it'll be up to school leaders to implement safety guidelines.

"It won't necessarily look the same everywhere,” he said earlier this week, “but the outcomes need to be the same — kids and staff safe in that learning environment.”

Hundreds of Twin Cities teachers, staff, parents and students rallied at J.J. Hill Montessori School in St. Paul Friday to call for public schools to remain in distance learning unless the levels of coronavirus in Minnesota are dramatically improved.

Kimberly Caprini, a member of the Minneapolis Board of Education, called on Gov. Tim Walz to act and “provide the leadership that Washington won’t.”

“We are at an impasse in these frightening times,” Caprini said. “Protect our families. Protect our teachers. No return to in-person school until 14 days of no COVID-19 cases across the whole state.”

Greta Callahan, president of the teacher chapter of the Minneapolis Federation of Teachers and Education Support Professionals, spoke out against pressure for teachers to "step up" and teach in-person.

“Safety precautions alone are not enough,” said Callahan. “Why on earth would we go back and risk our lives for a system that has devalued and defunded public education for three decades?”

The teachers unions also are asking for policy changes to support the education of students of color. Gov. Tim Walz is expected to make an announcement on schools next Thursday.

Riders may board from front door, pay by cash on Metro Transit buses starting August

Metro Transit says it will revert to some standard procedures it had abandoned when the coronavirus outbreak hit Minnesota.

Since mid-March, Metro Transit has required riders to board from the back of the bus to help protect drivers from possible virus contact. Front-door boarding and cash-fare collections will resume Aug. 1, said spokesperson Howie Padilla.

Padilla said new modifications are being made to protect drivers.

"What we've been able to do is create — and this was engineered out of our own maintenance staff — kind of plexiglass barrier, kind of what you're seeing in some of the stores that we're seeing through out the community but this was designed specifically to be installed on our buses,” Padilla said.

While it’s returning to cash-fare collections, Metro Transit is asking riders to use rider cards and electronic payments when possible, in order to limit contact. It’s also encouraging passengers to socially distance themselves from other public transit users.

COVID-19 brings surge of visitors — and some messes — to BWCA: The BWCAW and the surrounding Superior National Forest in far northern Minnesota are seeing a surge in visitors this summer. With activities canceled and other trips on hold, vacationers are flocking to the area for the kinds of outdoors getaways that naturally allow for social distancing. That's good news for outfitters. But some of those campers are wreaking havoc.

Another COVID-19 ripple effect: Crowded lakes cause conflict: The effects of COVID-19 are showing up on the lakes of Otter Tail County, where the sheriff’s department water patrol is having a busy summer. With vacations canceled and travel at a minimum, people are staying close to home — and more boats on the water have meant more complaints about noise, and trespassing on private beaches.