Plastic covers technology that was used to make an impromptu call center inside the State Emergency Operations Center in St. Paul on Thursday. During the beginning of the COVID-19 pandemic, the center received a high volume of calls from the public but could not socially distance call takers in the their normal offices.  Photo: Evan Frost | MPR News
By Brian Bakst of Minnesota Public Radio News - July 17, 2020

A Minnesota command center that has hummed with activity during the coronavirus pandemic and widespread civil unrest is on the cusp of being replaced with an all new disaster response hub that’s been on the drawing board for years.

Lawmakers are prepared to spend about $30 million on a new one, assuming a much-larger construction borrowing plan gets the go-ahead during a summer special session.

The current State Emergency Operations Center — not far from a downtown St. Paul food court and hardly the kind of decked-out control room seen in television dramas — is experiencing an unusually long run of activation to manage a full spectrum of crises. That’s on top of the usual activation for natural disasters, including tornadoes and spring flooding.

“It’s been a very busy place with a wide variety of missions and requirements occurring here simultaneously,” said Homeland Security and Emergency Management Director Joe Kelly, who has been hunkered down there for most of the past four months.

More than 250 people from state, local or federal agencies and from other nonpublic entities have pulled shifts in the 22,000-square foot facility in the past few months.

Cheryl Petersen-Kroeber is one of them. As director of emergency preparedness and response for the Department of Health, she’s been an incident manager at the emergency center since COVID-19 sent Minnesota and most other states into a heightened state of readiness in March.

“It is a lot of hustle and bustle, and it is the best way that I have experienced for us to be able to connect with all of the state partners,” she said. 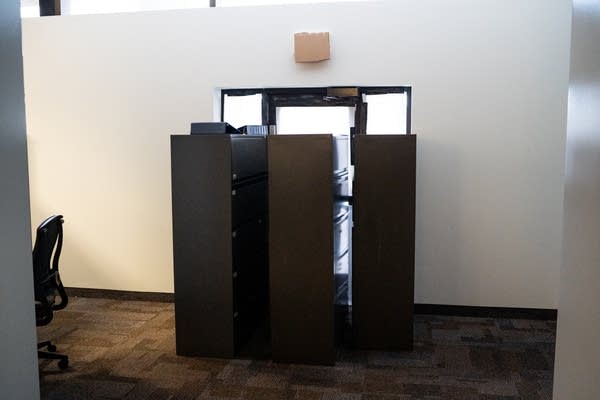 File cabinets barricade a door to Cedar St. inside of the State Emergency Operations Center in St. Paul. The door to the street is one of many vulnerabilities of the operations center.
Photo: Evan Frost | MPR News

Many of those working to coordinate the response — from tracking health supplies and hospital capacity to deploying testing teams — sit side-by-side in an open room where people are stationed at movable tables with phones and laptop computers. Drop-down screens nearby show critical information.

To Petersen-Kroeber, who has been through other emergencies and safety drills, the center has felt more cramped at a time of social distancing. There are few spacious enough areas for breakout meetings. And when the civil unrest hit, the teams dealing with the pandemic were asked to move off-site for a few days to make room for authorities trying to handle that sudden crisis.

“We all have done a good job of doing things remote. There’s a lot of work that’s better done when people are physically in the same location, so it posed challenges that way as well for us,” Petersen-Kroeber said.

During this recent stretch of activity, Kelly said the operations center was flooded with wastewater from a burst sewer pipe, had bullets pierce a street-side window and had a break-in.

Add to that limited access to redundant power sources. There are communication network difficulties with all the tall buildings around it — a communications “canyon,” Kelly says. And it’s close to a public parking ramp and light rail line that raise security concerns.

“It is challenging enough to try to manage the things that we’re trying to manage and trying to support local communities and provide services like coronavirus testing and all that,” Kelly said. “And then you sort of feel like you’re doing it with one hand tied behind your back because you’re fighting your facility and having to work through the effects of the things that are happening.”

Kelly and his allies say their push for more than a decade to build a new disaster management hub is more urgent than ever. The proposed standalone building has been in the mix before, championed by this governor and the last one, only to be left out.

A construction projects bill released this week includes almost $30 million for the center.

Plans call for the new center to house 75 emergency management staff on a day-to-day basis — and many more than that when managing a disaster. 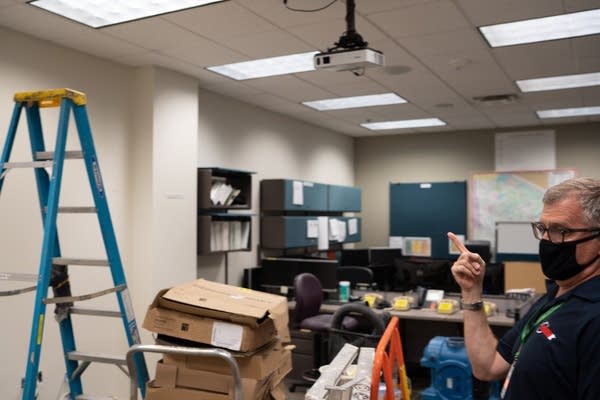 Minnesota Homeland Security and Emergency Management Director Joe Kelly points to part of the ceiling inside of the State Emergency Operation Center where a pipe burst, spilling sewage into an office.  Photo: Evan Frost | MPR News

It would be designated at the state’s “continuity of government” facility, which Minnesota presently lacks. That’s meant to provide critical services during a catastrophic event and be the place where the governor and other key officials would be relocated to ride out an emergency.

There’s no guarantee the bonding bill will muster enough votes to pass, particularly that the borrowing proposal is linked to other measures that are seemingly stuck. But if it does pass, the goal would be to have the new building opened sometime in 2022.

It would be built in a northern Twin Cities suburb, most likely Blaine, Minn., far away from its current urban location that has made authorities uneasy for some time.

“In our current state EOC, it is a substandard facility for a metropolitan area of this size. Where it is located, it is completely unsafe,” Jensen told lawmakers at a recent hearing on the many days of disturbances that led to a large law enforcement response. “And I’m telling you that because it was my airmen that were down there armed protecting that facility.”

Senate Capital Investment Committee Chair David Senjem, R-Rochester, was in the hearing room as Jensen laid out the shortcomings. He told the general he would be pleased with what lawmakers had in store.

Even though members of Senjem’s committee didn’t tour the current operations center as they had other projects submitted for consideration, he said the case made by Jensen was clear.

“He has no reason to speak in a political way about this,” Senjem said in an interview. “He commented on the inadequacies of that and so it’s inevitable anyway at this point. So, yeah, we can certainly live with that.”

To hear an audio version of this report and see related stories, follow this link to the MPR News website.  https://www.mprnews.org/story/2020/07/16/state-emergency-center-reaches-its-own-pivot-point