July Temperature Outlook: Midwest to Be Much Warmer Than Average Much of the country will experience a hotter than average July, according to the latest outlook from The Weather Company, an IBM Business.

The upper Midwest and Great Lakes will experience the most above average temperatures according to the outlook. These locations could have highs that average several degrees warmer than average throughout the month.

Portions of the West Coast, Rockies and South will also be above average.

If you want a more typical summer, head to the Gulf Coast this July where temperatures are expected to be near average. Keep in mind, though, that highs will not feel cool in this region with temperatures averaging in the 80s and 90s. 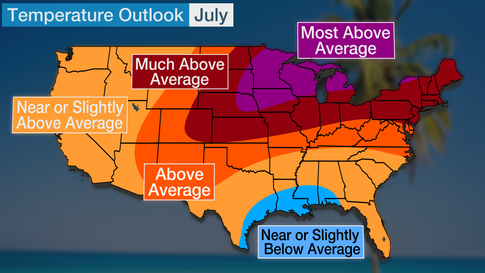 July Temperature Outlook from The Weather Company, an IBM Business.

While there will be breaks in the heat, it appears that these breaks will be short-lived, especially in the country’s northern tier.

Why Will It Be So Warm?

Dr. Todd Crawford, The Weather Company’s Chief Meteorologist and the author of the July Outlook, says that the development of a La Niña this summer is the leading cause.

La Niña is a cooling of water temperatures in the Pacific Ocean close to South America that often leads to global changes in temperature and precipitation.

La Niña is both an oceanic phenomenon and an atmospheric one.

Typically, the ocean cools, then the atmosphere responds to the cooling, but this year, the opposite is occurring. In fact, the atmosphere is already acting like a La Niña is occurring, and Crawford expects to see those atmospheric effects continue. 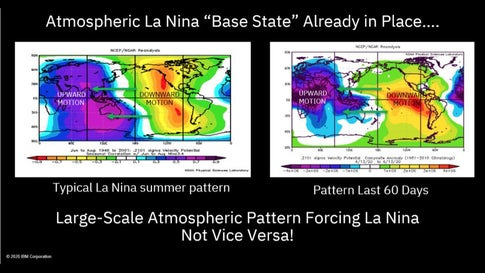 The Atmosphere is already acting like La Niña is occurring  Graphic: IBM

This summer could be significantly warmer than last summer, which saw near to slightly below average temperatures.

"The differences between this summer and last summer are driven by a reversal of the atmospheric forcing in the tropical Pacific. Strong atmospheric suppression (or sinking air) in the eastern tropical Pacific, associated with the developing La Niña event, is resulting in much warmer and drier conditions across the Midwest this year relative to last, ” says Crawford.

In the summer months, La Niña is best known for increasing the chances of a more active hurricane season, but it is also known for warming much of the Lower 48 in July.

A composite of the most recent 10 La Niña Julys shows that above average heat has occurred throughout the northern and central U.S. 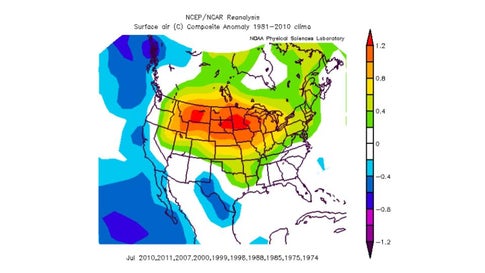 The second reason we should expect warmth across the northern tier is a rapid drying of soils over the past 1-3 months. While soils are relatively moist, as of June 27, partially due to Tropical Storm Cristobal’s track up the Mississippi River into the Midwest, the amount of moisture is quickly dwindling under the summer sun.

Drier soils are able to retain heat better than moist soil, especially when the ground becomes dried out and browner. This is similar to a dark car retaining more heat than a light-colored car. 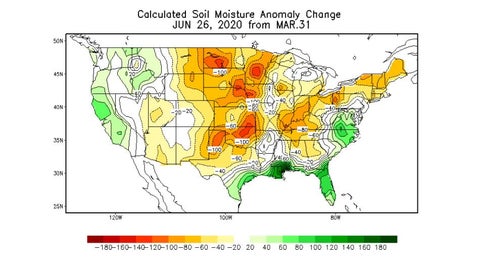 The excessive soil moisture levels, a common feature the last couple of years as El Niño forcing has dominated, have quickly eroded during a very hot and dry June. The continued La Niña forcing should result in a persistence of above-normal temperatures in July in the Midwest, " Crawford explains.

This could become a limited positive feedback loop since more heat would result in drier soils, which would then result in more heating until the cool season arrives.

July is the warmest month of the year across much of the country.

This includes a great deal of the central Rockies to the central Plains, upper Midwest, Great Lakes, Ohio Valley and East. Highs typically peak in early to mid-July in most of the Midwest and East while highs peak later, usually in late July or August, in Maine, Florida and in the northern Plains and Rockies.

High temperatures peak in the 80s and 90s across most of the country, while parts of the Pacific Northwest, upper Midwest and border regions of the Northeast reach the 70s for highs.

Parts of the Desert Southwest continue to see highs in the 100s, with highs peaking in early to mid-July. 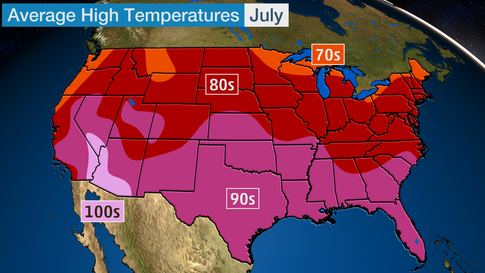 Any heat waves that occur this time of the year could increase these highs by 15-25 degrees.

Average overnight lows are often in the 70s across much of the South and Southwest while the Northeast, Midwest, Plains and West sees lows in the 50s and 60s.

Both warm afternoon highs and overnight low temperatures can be deadly this time of the year. Seek locations with fans or air conditioning and drink plenty of water if you feel warm.

To read the original story and read related weather reporting, follow this link to The Weather Channel website.  https://weather.com/forecast/national/news/2020-06-27-weather-company-temperature-outlook-july