A study has found pharmaceuticals and other chemicals in remote lakes in and around the Grand Portage Indian Reservation in northeastern Minnesota.

Researchers from the University of Minnesota, the Minnesota Pollution Control Agency and the Grand Portage Band of Lake Superior Chippewa teamed up for the three-year study, which was published in the journal Science of the Total Environment.

The researchers tested water, sediment and fish for about 160 different chemicals. They collected samples from 28 different lakes on the reservation and on land ceded to the U.S. government in the 1854 treaty, which stretches southwest to Duluth.

They detected 117 of the chemicals, including antibiotics, hormones, antidepressants, cancer drugs, cocaine, DEET, insect repellent and plasticizers like bisphenol A. 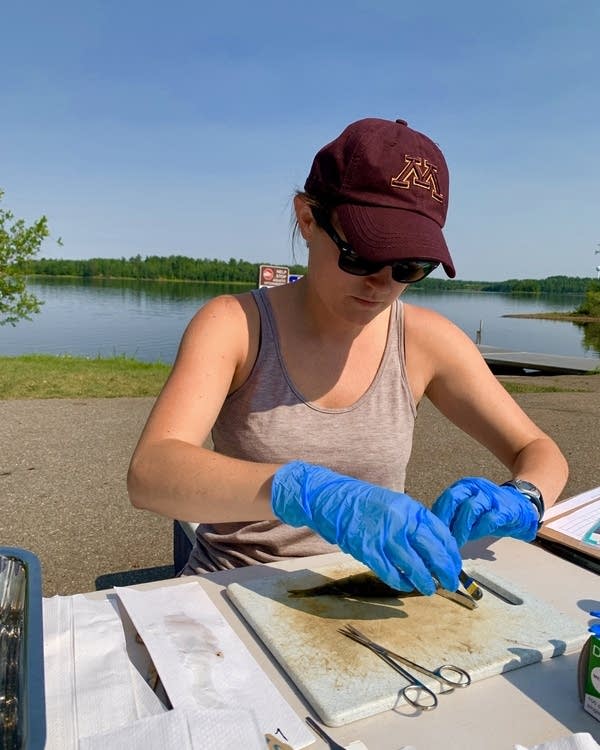 Jessica Deere, a Ph.D. student at the University of Minnesota’s College of Veterinary Medicine, tests a fish sample from a northeastern Minnesota lake for the presence of contaminants of emerging concern as part of a three-year study. Photo: Courtesy Grand Portage Band of Lake Superior Chippewa

“There was not a single location where we found absolutely nothing,” said Seth Moore, director of biology and environment for the Grand Portage Band of Lake Superior Chippewa and one of the lead researchers. “There were always at least a handful of chemicals in sediments and fish tissues and in waters.”

The study focused on so-called contaminants of emerging concern, which are largely unmonitored, unregulated and not removed by wastewater treatment plants.

Researcher Mark Ferrey, an environmental scientist with the MPCA, has been studying contaminants of emerging concern for more than a decade. He called the findings “pretty remarkable.”

“Even in some of these remote locations, we were seeing the same kind of chemicals that we would typically find in much more developed areas of the state,” Ferrey said.

The chemicals were often found in lakes that receive discharged water from wastewater treatment plants. But they also turned up in remote lakes with little or no human development, sometimes at levels similar to more populated lakes.

“We thought sites that were undeveloped would be more pristine and not have these chemical detections,” said Tiffany Wolf, assistant professor at the University of Minnesota’s College of Veterinary Medicine. “But there was not one site that we did not have at least one chemical detection in them.”

Researchers say that suggests that the contaminants are being transported by rain, snow and dust particles.

"I think much of it's coming from wastewater,” Moore said. “But obviously in these remote systems where there's no human inputs whatsoever, it has to be coming from elsewhere. So our suspicion is that it's coming from atmospheric deposition."

Newer technology allows researchers to detect chemicals at much lower levels than in the past. In some cases, the amounts they’re finding are comparable to one drop in 20 Olympic-size swimming pools, Ferrey said.

At those levels, it’s unlikely that the chemicals pose a risk to human health. However, even at low levels, studies have shown the chemicals can affect the reproductive development of fish and wildlife, he said.

Ferrey said the findings show the far-reaching impact humans’ use of chemicals is having on the environment.

"We like to go out to our very remote lakes and outstate areas and think that they are completely pristine,” he said. “But even there, we see the footprint of our chemical society."

The researchers say more study is needed of how low-level mixtures of the chemicals are impacting fish populations, and whether there’s any risk to people who eat fish.

Moore said the study fit in with research the Grand Portage Band has been doing on the impacts of contaminants on natural resources the band relies on for subsistence.

“The concern for me is biology and the fish populations, and what sort of behavioral or reproductive changes we are going to see across the entire food web,” Moore said. “We are seeing things that affect fungus. We are seeing antibacterials that affect bacteria. Every aspect of the food web could potentially be affected by the things that we're seeing.”

To read the original report and see related stories, follow this link to the MPR News website. https://www.mprnews.org/story/2020/06/14/study-finds-pharmaceuticals-in-remote-minnesota-lakes