Gov. Tim Walz gets his haircut by Erin Diede as he stopped in the morning at Capitol Barbers in the Minnesota State Office Building on Friday in St. Paul. Walz went for a haircut and then toured some of the sites where vandalism occurred during the George Floyd protests.
Photo: Anthony Souffle | Star Tribune via AP

Gov. Tim Walz on Friday unveiled a further loosening of easing of restrictions on restaurants, salons and barbershops, religious services and other parts of daily life amid some evidence the pandemic may be plateauing.

“We believe we should be able to handle this,” Walz told reporters, but he cautioned the state needed to remain vigilant against the spread of the disease as people return in bigger numbers to public spaces. “COVID is still with us,” he said, “but we gotta live with it.”

Among the changes set to take effect Wednesday:

With the loosened restrictions, the Mall of America, which has been closed since mid-March due to coronavirus concerns, will reopen Wednesday. Mall executives had intended to reopen June 1 but changed plans following the May 25 killing of George Floyd.

Earlier this week, restaurants were allowed to resume table service but only at reduced capacity and for outdoor diners. Hair salons, barbershops, tattoo parlors and other personal services businesses also reopened for limited appointments.

In recent weeks, religious institutions received permission to resume worship services, weddings and funerals to small audiences. The next phase could expand the ability of those entities and others to serve more people in more settings.

Youth sports leagues were also awaiting word on when they could start games. Some resumed practices with social distancing protocols in anticipation of getting back on the field for competition.

Officials continued their plea to Minnesotans to continue staying 6 feet apart, wear masks and stay home if you feel ill.

“We are not going back to normal,” cautioned Steve Grove, commissioner of employment and economic development as he praised businesses for the sacrifices they’ve made in the COVID-19 era. “We’re continuing to ask for personal responsibility in the next phase.”

State Health Commissioner Jan Malcolm indicated the recent patterns of cases and hospitalizations in Minnesota are showing “a plateau with small waves within in,” calling it an “encouragingly stable” situation.

She cautioned, though, that the protests over George Floyd’s killing may have boosted the disease spread. It will take a few weeks to find out. But she expressed confidence that the state was positioned to handle the pandemic without it overwhelming the case system.

"We are likely dealing with high levels of COVID-19 transmission for months to come," she said.

Despite the looser restrictions, Republican legislative leaders said Walz, a DFLer, did not go far enough.

Earlier in the day, Senate Republicans released a statement from Senate Majority Leader Paul Gazelka, R-East Gull Lake, saying, “the pandemic fear must end” and Walz “should not get to decide who gets to go to a funeral, a wedding, or attend large gatherings, and others don’t get to.”

Asked about the comments, Walz the decisions were complex” and that if ended all restrictions and more people died because of it, it would be on him.

“It’s easy,” the governor said, “to coach from the seats on the side and not have to be there."

Walz’s update came hours after the Health Department reported 33 more deaths, bringing the total to 1,148 in Minnesota since the pandemic began.

Grove heard concerns earlier Friday from lawmakers of both parties about economic despair in their communities from restaurant closures to business loans that will come due.

“We need your help,” Rep. Dave Lislegard, DFL-Aurora, pleaded with Grove, voicing criticism about outdoor seating as the only option for restaurants struggling to get by.

Patrick and Alissa Horan, who own the Sawmill Saloon and Restaurant in Lislegard’s district, said they had to put in a $20,000 temporary deck to prepare for that. But they said it’s not a sustainable business model, with sales down 90 percent since the March closures.

“I know the restaurant and bar industry has been absolutely brutalized,” Alissa Horan said. “Up here, we are ready to open.”

Grove assured lawmakers the governor was moving toward relaxing restrictions in a way that will guard against coronavirus flare-ups.“We know that without moving into phase three, we will have an increasing number of businesses that will cease to exist and not have the jobs that are there for workers,” Grove said.

Rep. Tony Juergens, R-Cottage Grove, said gyms are at risk of going under unless they can let people back in, even with reduced capacity. Wedding venues and caterers in his district have seen a season of business evaporate, he said.

“Their inventory is available dates,” Juergens said. “And if a bride pushes her wedding until next year, that’s inventory the venue can’t sell. It’s lost.”

Grove said the fallout “is real and it is painful,” but he disagreed that the public health decisions that sparked the closures have been flawed.

He said the outbreak would have been worse without them and the road back must be carefully plotted out to bolster confidence “so that customers actually show up and that we don’t see hot spots or spikes that force us to shut things back down. That would be even more devastating for our economy.”

Health officials remain concerned that mass demonstrations in the wake of Floyd’s death in police custody will cause a spike in cases. They have urged anyone who participated in a protest to seek a test.

Malcolm said her department has made clear to providers around the state that people involved in demonstrations or any following cleanup efforts should be tested for COVID-19 — even if they have no symptoms.

She urged people to get tested right away if they have symptoms. If they don’t, she said, they should wait five to seven days after they participated in a protest or cleanup effort to get tested.

Malcolm added that the state should start to see the impact of the state’s efforts to reopen in about a week.

The fact that people without symptoms of the illness can still be spreading the virus continues to be among the biggest challenges, said Kris Ehresmann, the state’s infectious disease director.

“There is a big role for asymptomatic transmission,” and it’s hard to identify who those people are, she said.

In southwestern Minnesota’s Nobles County, where an outbreak hit Worthington’s massive JBS pork plant, about 1 in 15 people have tested positive for COVID-19. In mid-April, there were just a handful of cases. By Friday, there were 1,577 confirmed cases, although the numbers are rising at a much slower rate than in previous weeks.

An undisclosed number of workers at both plants have tested positive for the virus. There were about 55 confirmed cases in Stearns County in early May. By Friday, confirmed cases were at 2,056 with 14 deaths.

On Friday, the Health Department reported 514 people have now tested positive in the county.

Mower County in southern Minnesota, another county with a large meatpacking presence, is becoming a hot spot. 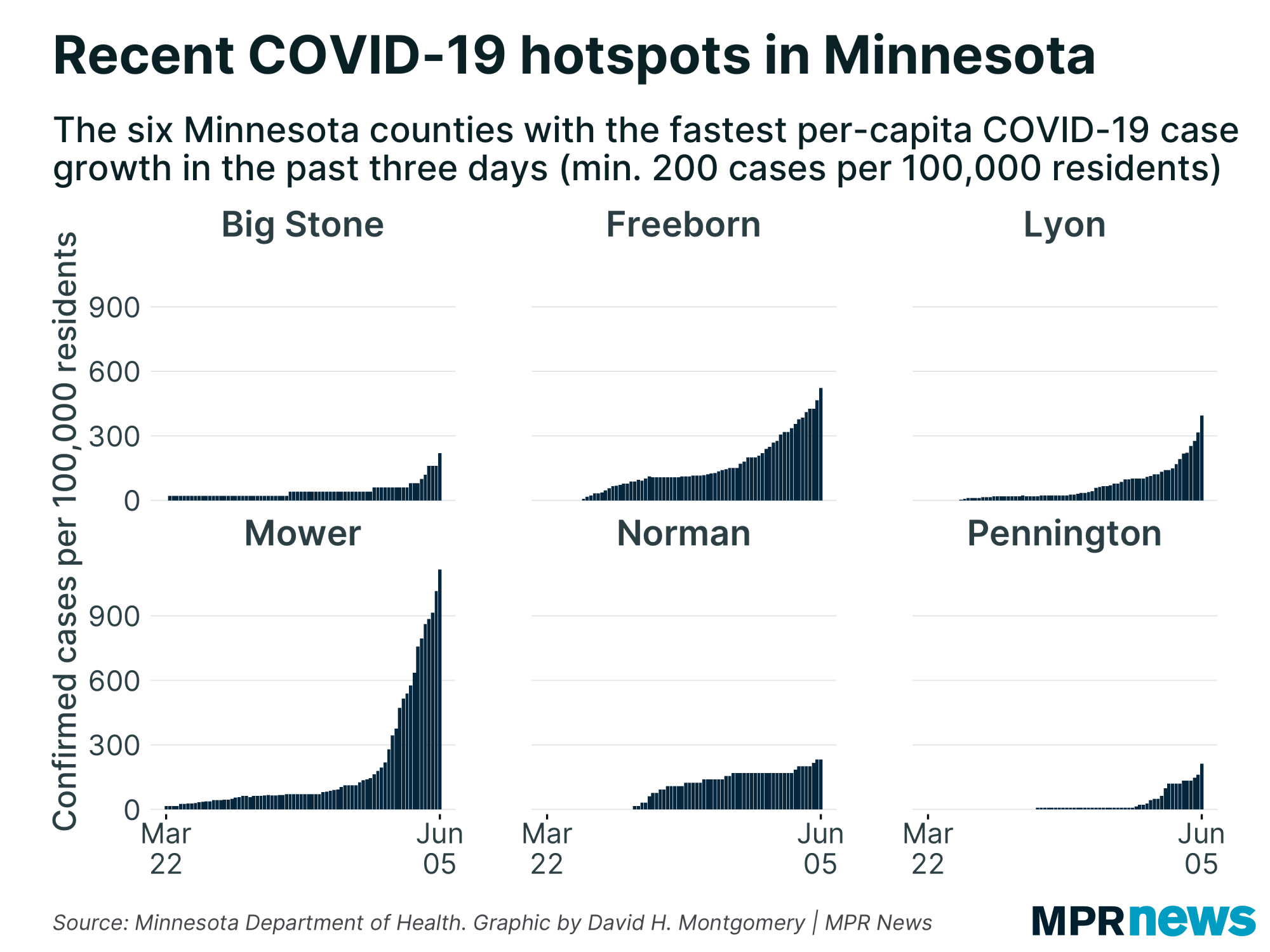 The state is warning Minnesotans to be on alert for text scams related to contact tracing of COVID-19.

According to the Federal Trade Commission, scammers are targeting people via text, saying that someone they know has tested positive for coronavirus and that they should click on a link for more information.

Some texts ask people to download software on to their phone, while others seek information like Social Security numbers and banking information.

Contact tracing is the practice of figuring out who someone who has tested positive for coronavirus has been in contact with. It's a strategy meant to mitigate the spread of the virus.

The state is encouraging people who get these texts to report them to the FBI.

A new University of Minnesota study shows hydroxychloroquine is not able to prevent the development of COVID-19 better than a placebo.

The results of the first randomized clinical trial of the drug will be published in the New England Journal of Medicine. Researchers also found that 40 percent of the trial participants taking hydroxychloroquine developed nonserious side effects like nausea and diarrhea.

However, the trial found no cardiac complications from taking the drug, which is typically used for lupus.

The trial included 821 people in the United States and in Canada who had been exposed to someone with the virus, either members of their household or in their work as a health care worker or first responder.

President Donald Trump has touted the drug as a treatment for coronavirus, despite warnings from medical professionals that there was no research to back up his claims.

To read the original stories and see related COVID-19 reporting, follow this link to the MPR News website.  https://www.mprnews.org/story/2020/06/05/latest-on-covid19-in-mn