'We’re all one paycheck away': More Minnesotans flocking to food shelves Tara Hansen (left) and Laura Stubbe load food items into a car outside of the Jackson County food shelf on May 14, 2020, in Jackson, Minn.  Photo: Jackson Forderer for MPR News

As more Minnesotans lose their jobs because of COVID-19, local food shelves are seeing a surge in first-time visitors needing emergency food services — and the demand doesn’t look like it’ll let up anytime soon.

Anti-hunger advocates say more people will be depending on emergency food services as a result of the pandemic, with aging seniors in particular helping fuel the trend.

Back in 2018, Minnesota’s food insecurity rate was about 1 in 12 households, according to Hunger Solutions Minnesota, a nonprofit that supports food shelves. However, a recent survey by Blue Cross and Blue Shield revealed that 1 in 3 Minnesotans are now worried about their ability to access affordable, healthy food. 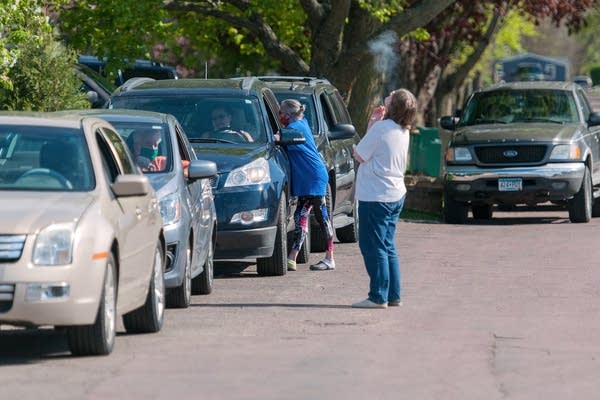 In Jackson County, a small rural community in southern Minnesota, the local food shelf has become indispensable. An hour before it officially opened on a recent afternoon, a steady stream of cars lined up beside the curb. Volunteers rolled out metal shopping carts filled with eggs, canned vegetables, milk and bread. 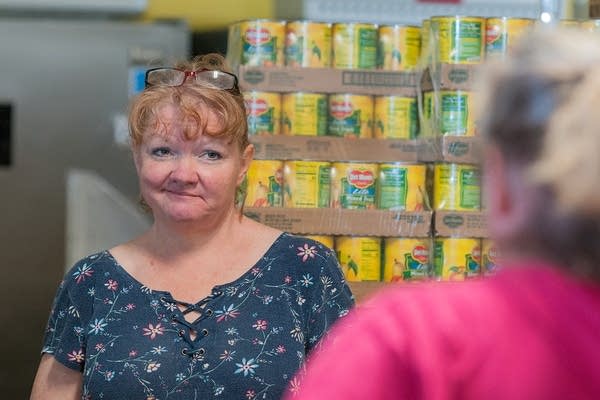 Laura Stubbe listens to Tara Hansen inside the Jackson Food Shelf. The food shelf has seen an increase of people seeking services due to the coronavirus pandemic.   Photo: Jackson Forderer for MPR News

“We almost doubled in the number of families that we served last year in March,” said Laura Stubbe, who co-manages the Jackson Food Shelf.

Even before the pandemic, Jackson County saw a 775 percent increase in food shelf visits over the last five years, bringing its visit rate to among the highest in the state, according to Hunger Solutions Minnesota.

Visits to food shelves increased during the 2008 recession, and even after it ended, those rates continued to climb. Minnesota has seen more than 3 million visits to its food shelves for nine consecutive years.

Then came the pandemic — and monumental job loss. Since mid-March, when Gov. Tim Walz began ordering the closures of businesses and other institutions across the state to slow the spread of the virus, more than 692,000 people have applied for unemployment insurance, according to figures released Thursday from the Minnesota Department of Employment and Economic Development.

Looking for work is Gary Colburn, a 66-year-old veteran from Jackson, who showed up at the food shelf to collect his box of eggs, vegetables, pork loins and condiments. Colburn has experienced homelessness three times during the last decade. Recently, he secured a car to get around while on a fixed income. However, COVID-19 added extra hurdles to the job hunt.

“I’m looking for a little part-time job, you know, I’m 66 years old but it’s hard,” Colburn said while waiting in his car. “I have a flip phone. I don’t have access to the internet. I don’t have a smartphone. And so, now being on lockdown, everything is geared to being on the internet. You’re locked out. Someone my age, I’m locked out of being able to participate actively in a labor market. I have to go an extra mile in order to accomplish the same thing.”

Without the food shelf, Colburn said he would be faced with the dilemma of whether he should give up groceries to pay the bills.

“We’re all just one paycheck away from the street,” he said. “We all just need to be aware that the need is in our community and we need to support it.” 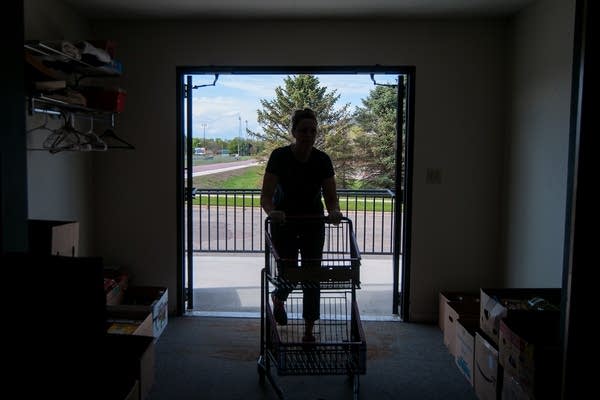 Like just about everything else, the Jackson Food Shelf has had to adapt to the times. Normally, clients would be able to shop the aisles inside and pick out their own food. But with concerns about COVID-19, volunteers pack their boxes for them.

There are other challenges during the pandemic: Freezer items are scarce. Options became limited when nearby meat processing plants were closed due to outbreaks, which meant less variety of meat available for food banks like Second Harvest Heartland to source local food shelves.

“Usually before everything transpired, you’d have like nine pages to scroll through for items that they have available to you,” said Tara Hansen, co-manager of the food shelf in Jackson. “So during the pandemic, it was down to three pages, which was huge. ... But our philosophy is if you need food, we are going to provide it for you.”

Boxes of groceries are now wheeled out in carts to people waiting out in their cars. Many express gratitude to the volunteers. Each client has a different story about why they were at the food shelf, but keeping bellies full was one less thing to worry about. 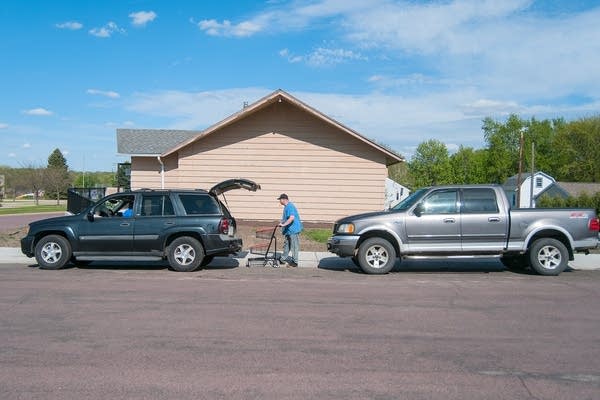 Client Becky Cother, 66, of Lakefield, Minn., works as an in-home care specialist and for the last three months has been using the Jackson Food Shelf for groceries. Social distancing has been hard on people, Cother said, including her granddaughter who’s experiencing depression and is at home. Being able to get groceries helps Cother take care of their family.

“This place is just magnificent,” she said. “They helped so many people and they helped me and my family out. And without them, you know, sometimes we just can’t make it.”

Colleen Moriarty, executive director of Hunger Solutions, said that more Minnesotans are finding themselves navigating programs like the Supplemental Nutrition Assistance Program (SNAP). Applications in the state have doubled.

Transportation issues continue to be among the most persistent barriers to reliable food sources, especially for vulnerable communities like the aging population, she said. 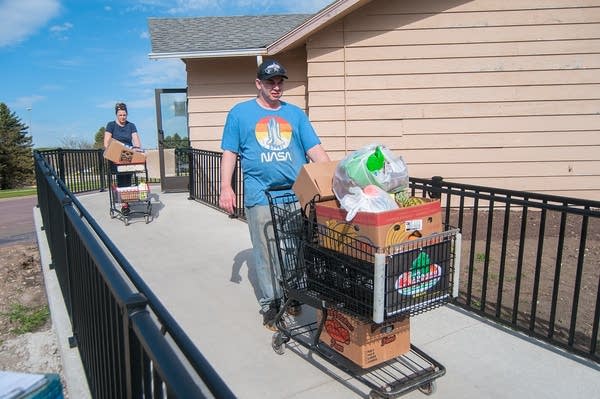 Gary Wagner (center) and Kelly Benson bring carts of food out to people waiting curbside at the Jackson County food shelf in Jackson. The food shelf now delivers the food to people in their cars instead of having patrons come inside due to the coronavirus.  Photo: Jackson Forderer for MPR News

“A world that has transportation issues in the time of the crisis is almost nonfunctional,” Moriarty said. As people are confined to their homes, the “need for mobile response for food is growing and will continue to grow,” she said.

When explaining food insecurity over the years to the public, Moriarty has often made the case that your own neighbor might be experiencing hunger.

“Well, now it could be you,” she said. “In fact, it probably is you who needs assistance to be able to make it through this. So, I think that the face of hunger changes. When we have experienced it ourselves, and even if we haven’t experienced this ... I don’t think it can be a hidden problem anymore.”

To read the original article and see related stories, follow this link to the MPR News website.  https://www.mprnews.org/story/2020/05/22/were-all-one-paycheck-away-more-minnesotans-flocking-to-foo...