Latest on COVID-19 in MN: 343 deaths; Walz extends stay at home order until Monday, May 18 With his current stay-at-home order set to expire Monday, Gov. Tim Walz unveiled a plan Thursday that extends the order and keeps bars and restaurants takeout-only until May 18, but also makes changes to allow some additional business operations.

The new order will let retailers and other non-critical businesses start offering curbside pick-up, starting Monday. The governor’s office said the move would put “up to 30,000 Minnesotans back to work in a safe, coordinated way.”

Salons and barbershops can sell products but are still prohibited from providing in-shop services.

The governor told reporters that while cases are rising rapidly the state was prepared for a surge and key metrics including current hospitalizations and intensive care patients aren’t rising in a way that would overwhelm the health system.

“Minnesotans have save lives and bought us critical time” to prepare, Walz said.

The governor’s latest moves come as Minnesota’s COVID-19 toll continued on its grim course Thursday, with the Health Department reporting 343 Minnesotans have died from the disease, 24 more than Wednesday. Total cases since the pandemic began crossed 5,000.

The number of currently hospitalized jumped to 365, up 45, with 130 in intensive care.

Earlier this week, he gave the green light to letting factory and office workers who don’t have customer-facing jobs back into their work spaces, with safeguards. On Wednesday, he expressed hope that smaller Main Street business could soon reopen with social distancing and other hygiene measures in place.

The governor, though, has made clear that places that depend on public crowds, including bars, eateries and big sporting events, would be among the last to return to normal business operations.

As restrictions relax and testing ramps up, health leaders said Minnesotans should expect to see the COVID-19 outbreak widen, but they expressed confidence that Minnesota’s health care system was prepared to deal with an expected surge of cases and hospitalizations.

The need for that kind of preparation was evident Thursday as total cases hit 5,136 with new cases rising significantly faster now than the number of recoveries.

Health Department data showed about 42 percent of Minnesotans testing positive for the disease since the pandemic began have recovered to the point they no longer need to be isolated. Before this week, recoveries had been running at about 50 percent of total cases. 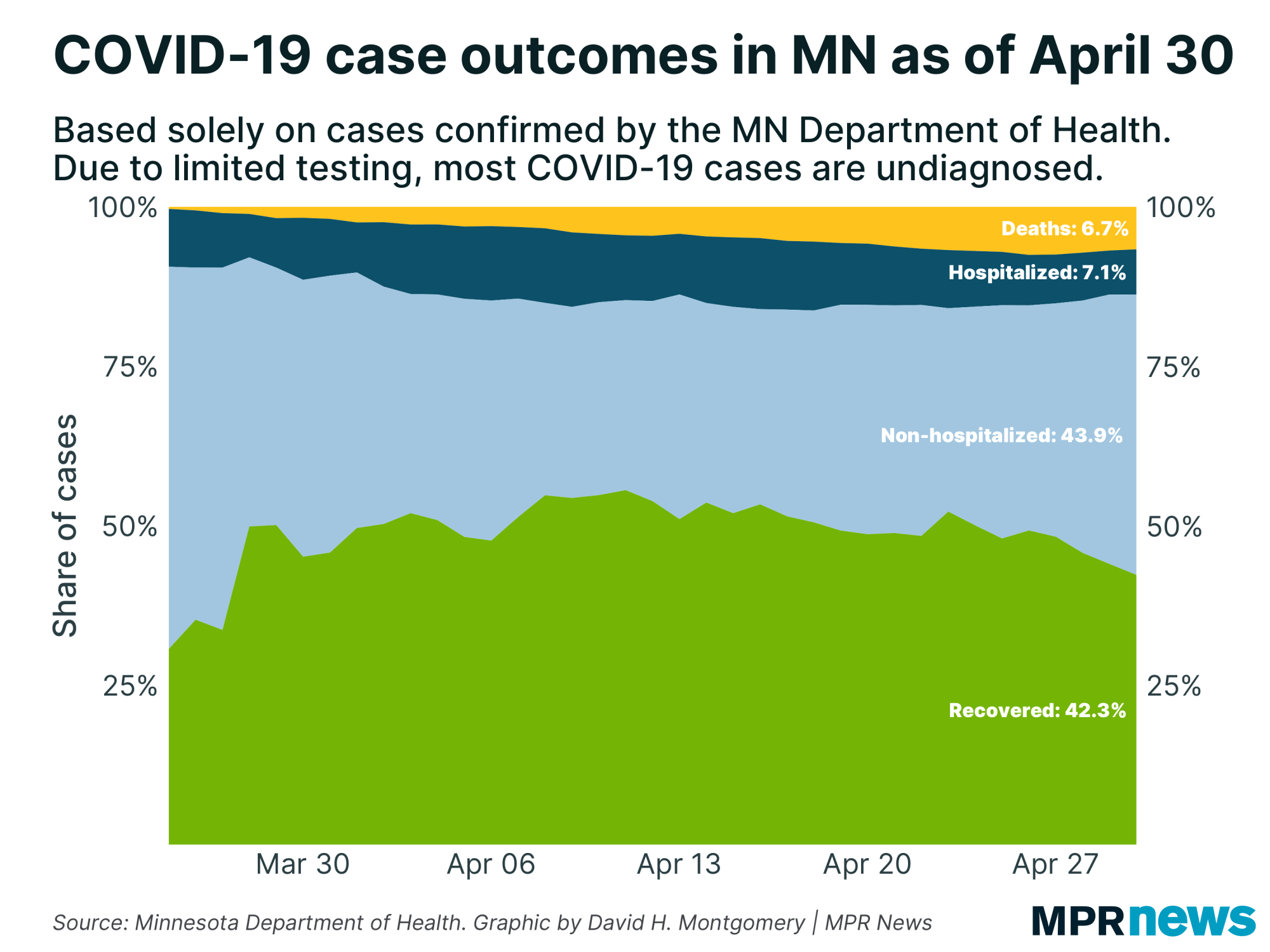 A new effort between the state, Mayo Clinic and the University of Minnesota to dramatically ramp-up testing in Minnesota and quickly identify and isolate COVID-19 cases appears to be paying off.

The state on Thursday reported 3,279 completed daily tests from the prior day — the first time daily testing topped 3,000.

Walz said the state should be testing 5,000 people daily as part of the plan to reopen the economy.

As testing accelerates, more cases are discovered. That’s especially true in southwestern Minnesota, where an outbreak centered in Nobles County around the massive JBS pork plant in Worthington continues to mushroom.

The county had 615 cases confirmed Wednesday. On Thursday it hit 742. It’s the largest outbreak in Minnesota outside the Twin Cities and the largest by far relative to the county’s population. 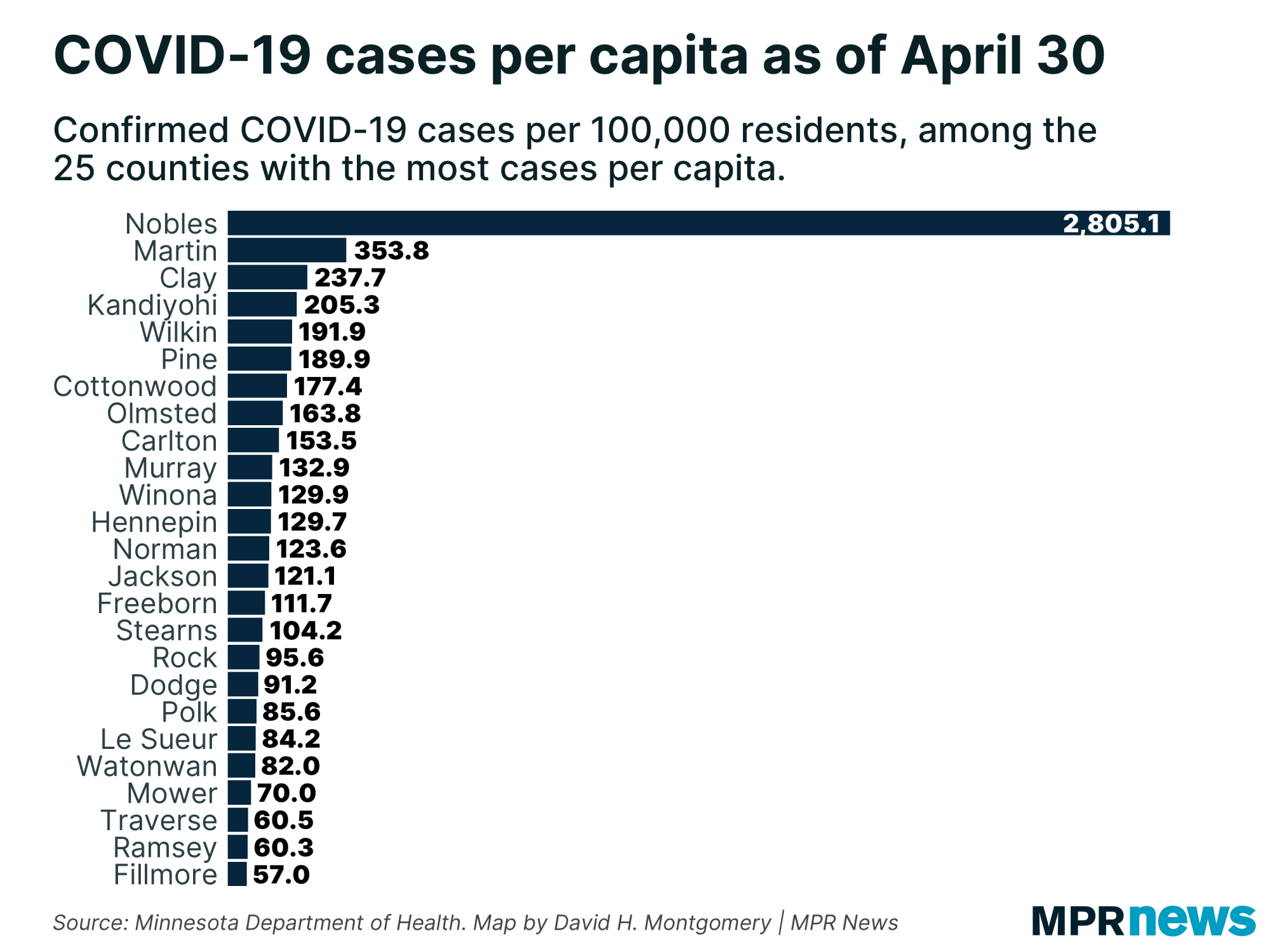 Beyond the ill and unemployed workers, the cascading effects of the shutdown of JBS and of the massive Smithfield Foods pork processing plant in Sioux Falls, S.D., are also hitting pork producers hard. With those plants down, farmers have few places to sell the animals and so are being forced to destroy them, Minnesota Agriculture Commissioner Thom Petersen said Monday.

At a Wednesday press conference, Minnesota DFL U.S. Rep. Collin Peterson said state officials together with JBS executives and union leaders would be working on a plan that would allow the plant to reopen while keeping workers safe and tested as they enter.

Peterson said nearly 500 JBS workers have tested positive for the coronavirus, about 20 to 25 percent of the plant’s workforce.

Restarting JBS, he said, would require slowing down the hog processing and spacing out workers on the line with shields between them. Peterson added that U.S. Agriculture Secretary Sonny Perdue told him Wednesday morning that the JBS and Smithfield plant reopenings were a top priority and that he wanted JBS running in two or three days.

“I agree with him, but I’m not sure what the timeline is,” Peterson said.

Kandiyohi County in west-central Minnesota is also seeing cases jump a week after officials with the Jennie-O turkey processing plant said some employees had tested positive for the coronavirus.

A week ago, Kandiyohi County, where the Willmar plant is located, had confirmed three COVID-19 cases. On Thursday, the Health Department reported 91 people in the county have now tested positive.

The economic fallout from COVID-19 extends far beyond agriculture.

Some 564,000 Minnesotans have applied for standard unemployment benefits since the middle of March, officials said Wednesday, although the pace of applications is slowing.

There have also been 40,000 independent contractors or self-employed people who have been paid so far through a special pandemic unemployment insurance program, said Steve Grove, commissioner of the Department of Employment and Economic Development.

Grove on Wednesday declined to preview Walz’s planned Thursday announcement but acknowledged that businesses that rely on person-to-person contact would be “trickier” to manage safely than someone coming to a store, picking up something and leaving. 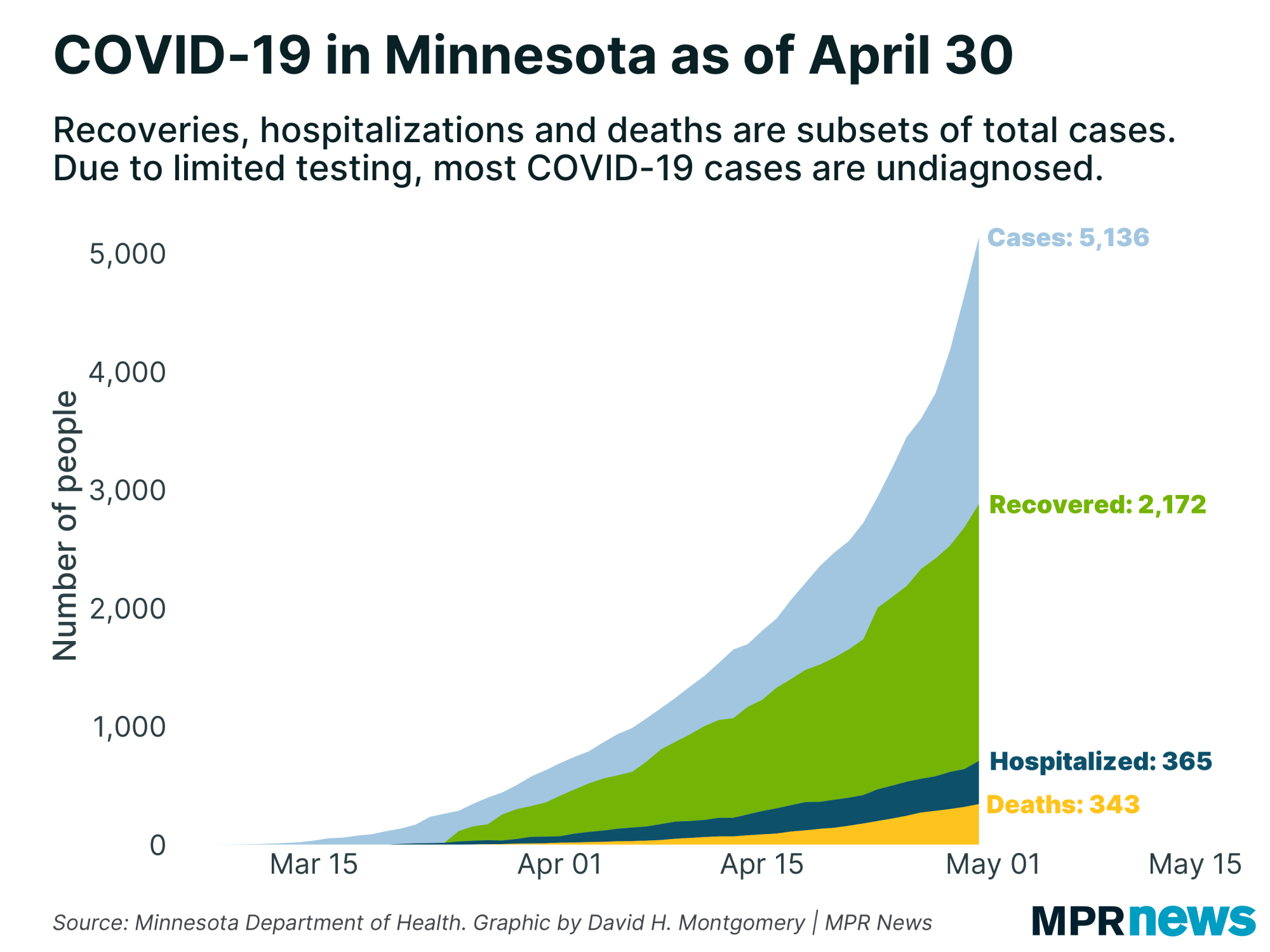 The county started the week with 55 positive cases of COVID-19. In two days, that number more than tripled, to 166. Health officials say the spike is a result of increased testing focused on hot spots in the county.

Those include two poultry plants, Pilgrim's Pride in Cold Spring, Minn., and Jennie-O Turkey in Melrose, Minn., where an undisclosed number of workers have tested positive for the virus.

County Public Health Director Renee Frauendienst said staff have been reaching out to sick workers to provide testing and information.

"What we're trying to do is get in touch with all those people, so that we can talk with them to make sure they understand what isolation and quarantine measures they need to take in order for us to prevent the spread,” said Frauendienst.

Jennie-O says it will pause its operations in Melrose to undergo a facilitywide cleaning.

Several more county boards granted waivers this week to the usual May 15 filing deadline for the year’s first property tax installment. An Association of Minnesota Counties tally lists 24 of 87 Minnesota counties that have done so to date.

While the terms vary by county, most give people until July 15 to pay their homeowner or commercial taxes. Some are still requiring those using escrow accounts to pay on time and others are limiting the exemption to bills of less than $100,000.

The extensions will give more time to pay before penalties and interest kick in, although some counties are not reducing penalties entirely. There are places where businesses and residents must prove they are impacted by COVID-19 to qualify.

The state’s regional universities and two-year colleges are considering how to respond to COVID-19 when classes resume later this year.

Administrators are mapping out summer classes and the start of a new academic year in the fall, and are imagining three scenarios, said Devinder Malhotra, chancellor of the Minnesota State system, said Wednesday.

“One is the scenario most optimistic — one off minimal disruption — and the second scenario is that social distancing and other safety protocols would still be in place; and then the third scenario we are planning for is another or reinfection,” he said.

Malhotra said that even before the COVID-19 outbreak, nearly a quarter of classes were already online. That number is close to 95 percent now, with only some hands-on requirements left.

Northern Minn. companies step in to help fill PPE shortage:Hospitals and clinics have struggled to get enough personal protective equipment, or PPE, since the beginning of the COVID-19 pandemic. In Duluth, and across the state, local companies have retooled to manufacture masks, face shields, and other equipment to help meet that shortfall.

New Hope nursing home sees 'devastating' 47 deaths from COVID-19: St. Therese said that since early April, 47 residents of the 258-bed facility have died of the disease caused by the coronavirus. It has tested 100 percent of residents, with the results of the final 25 expected in the next few days, and that 130 residents have tested positive since testing began in late March.

Duluth projecting 'absolutely catastrophic' budget shortfall: The city’s coronavirus response and an expected drop in tax revenue could put the city $38 million in the red. That represents about 40 percent of its general fund.

Health officials for weeks have been increasingly raising the alarm over the spread of the novel coronavirus in the United States. The disease is transmitted through respiratory droplets, coughs and sneezes, similar to the way the flu can spread.

Government and medical leaders are urging people to wash their hands frequently and well, refrain from touching their faces, cover their coughs, disinfect surfaces and avoid large crowds, all in an effort to curb the virus’ rapid spread.

The state of Minnesota has temporarily closed schools, while administrators work to determine next steps, and is requiring a temporary closure of all in-person dining at restaurants, bars and coffee shops, as well as theaters, gyms, yoga studios and other spaces in which people congregate in close proximity.

To read this story and more COVID-19 reporting, follow this link to the MPR News website.  https://www.mprnews.org/story/2020/04/30/latest-on-covid19-in-mn