As many as 100,000 manufacturing, industrial and office workers could be back to work as soon as Monday, but public school buildings will stay closed, and there is serious doubt about this year’s Minnesota State Fair.

Those were the key takeaways Thursday as Gov. Tim Walz updated reporters on the ongoing fight to manage the spread of COVID-19 while trying to restart sectors of Minnesota’s shuttered economy.

Peppering his remarks with optimism and grim reality, he applauded Minnesotans for the sacrifices made the past month, saying they’d helped check the disease’s spread and keep the health care system from being overwhelmed.

But he also warned the state to expect a coming surge in COVID-19 cases as the amount of testing rapidly increases — and he braced Minnesotans to prepare for many more deaths, and a possible fall resurgence.

"I want to remind Minnesotans: The hardest days are ahead,” he said. “The climb is still up. We're not near that peak yet.”

He also signaled that Minnesota was still not close to allowing the return of people in packed public spaces, including crowded bars, restaurants or major sporting events.

That may also include the Minnesota State Fair.

Walz did not sound optimistic when a reporter asked about the prospects for the fair — an event that puts hundreds of thousands of Minnesotans shoulder to shoulder for days — opening in late August.

“I wouldn’t want to make a definitive call. But I also don’t want to give any false hope on this. I think it would be very difficult to see a State Fair operating,” he said. “I don’t know how you social distance in there. I mean one of the greatest parts of the State Fair is it’s super crowded.”

The last time the State Fair wasn’t held? It was during the polio epidemic in 1946.

State health officials reported 200 people have now died from the disease, 21 more than Wednesday, the largest single one-day toll since the pandemic began and the third consecutive day of double-digit deaths. 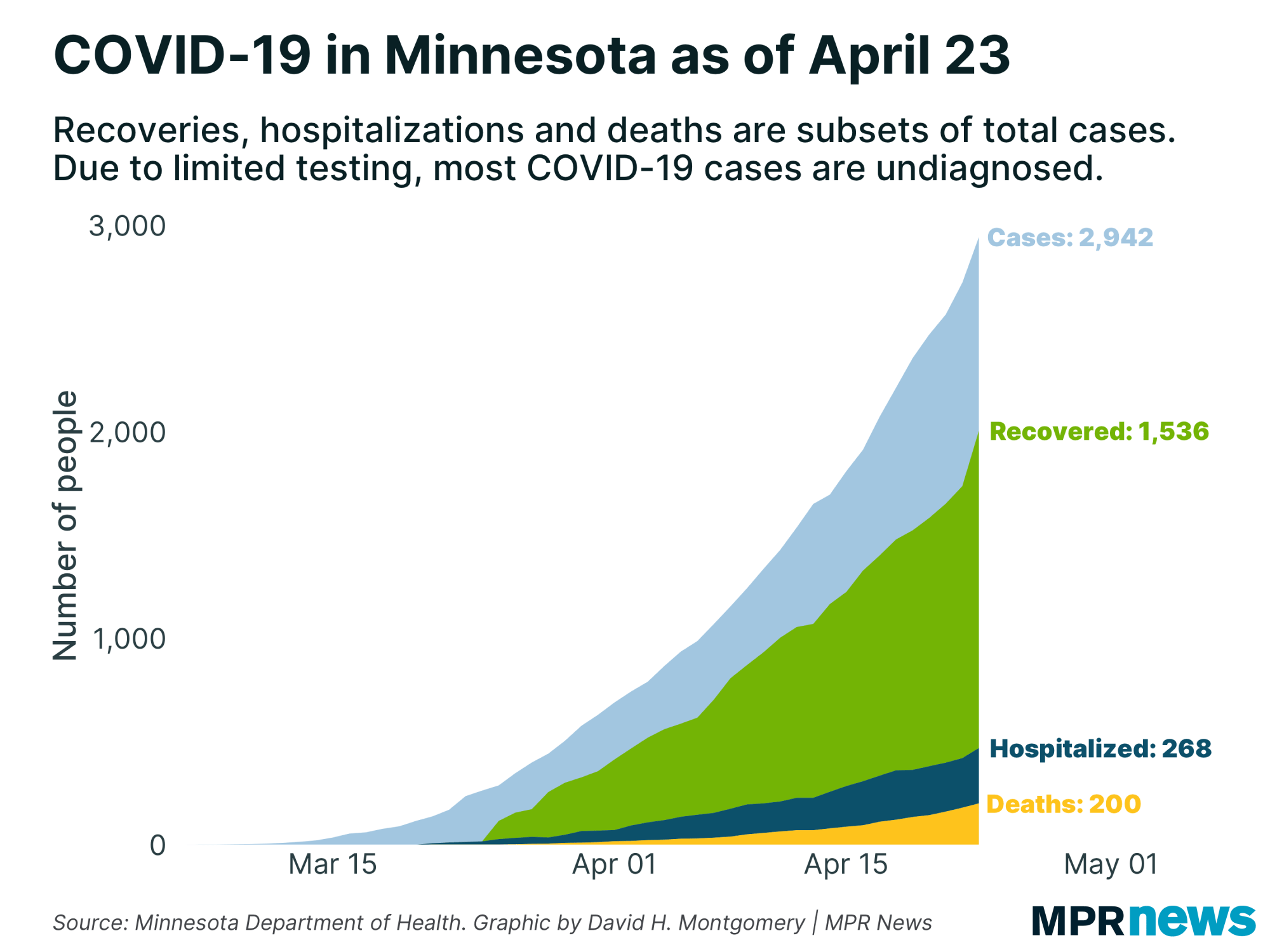 Total current hospitalizations rose to 268, up 28 from the prior day, while patients in intensive care units dipped to 104.

Since the outbreak began 2,942 people have tested positive for the disease, up 221 from Wednesday. About half have recovered to the point they no longer need isolation.

Walz unveiled a set of protocols Thursday to permit manufacturers, and other businesses that aren’t customer facing to restart and let employees return to work as soon as Monday, providing there are safe-distance, sanitizing and other protocols in place and executives commit to enforce them.

That was great news to Bob Riegelman, president of Riedell Skates in Red Wing, Minn.

"We've done all that has been asked of us by our governor,” he told reporters. “We're extremely excited, almost to tears," that reopening is at hand.

Officials will continue using data and science in the process to restart parts of the economy while protecting workers, said Steve Grove, the state’s commissioner of employment and economic development. "

“It's going to take some time for life to feel anything like it used to feel, but we really feel with a plan in place, government, business communities working together, we can get this right  for all Minnesotans."

While the changes will put some 100,000 Minnesota employees back on the job at thousands of business sites across the state, it will not help retail firms that depend on crowds and customers.

Many restaurant owners are struggling to stay afloat as they await word from the state about when and how they might reopen. The trade group Hospitality Minnesota has given Walz a list of safety protocols for reopening.

While some are doing curbside and takeout orders, others were unable to adapt or couldn’t bring in enough money to sustain the operation, said Liz Rammer, president of Hospitality Minnesota. “Some have closed permanently, and some have closed temporarily.”

Walz confirmed that school buildings will stay closed through the rest of this school year, adding, “there’s no joy in this."

Asked if parents should expect distance learning to continue into the next school year? Walz, a former high school teacher and coach, conceded: "The answer is I don't know yet on fall." He said it was under study.

"I worry deeply on this,” Walz said of students potentially falling behind because of the strain of distance learning and the lack of face-to-face contact with teachers and peers. “I mean these are decisions that will reverberate through a lifetime potentially. We know what educational research shows if you fall a grade or two behind.”

Minnesota students began their remote instruction in late March. At least 39 other states have ordered or recommended that school buildings remain closed for the rest of the academic year, according to Education Week.

Kevin Burns, a spokesperson for St. Paul Public Schools, said the state’s second largest district is starting to plan for a scenario in which school buildings would need to stay shuttered even longer, affecting the district’s summer learning programs and beyond.

“We also are wise to the fact that we don’t know so much about the spread of the virus and its impact that we have been working rather diligently to explore options for continuing distance learning into the new school year this coming fall,” he said.

Many districts have been improving their remote teaching systems during the statewide shutdown order, and given the continued spread of COVID-19, it would be hard to reopen schools without exposing more people, said Gary Amoroso, head of the Minnesota Association of School Administrators.

He said he supported Walz’s decision to keep buildings closed and that districts are looking at ways to hold graduation ceremonies for high school seniors that still observe social distancing protocols.

Separately on Thursday, the Minnesota State High School League canceled all spring activities and athletics for the rest of the school year.

Nobles County in southwestern Minnesota continues to be a hot spot for COVID-19. It holds the largest cluster outside the Twin Cities area and Rochester and the highest rate of COVID-19 cases of any county by far relative to its population.

The JBS pork processing plant in Worthington is at the center of the Nobles County outbreak. On Monday morning, company executives announced they were indefinitely shutting the plant, which employs some 2,000 workers, to try and get control of the situation.

On Thursday, the Health Department said Nobles County now has 196 positive tests for the disease, up, 70 from Wednesday. It had just two cases last week. 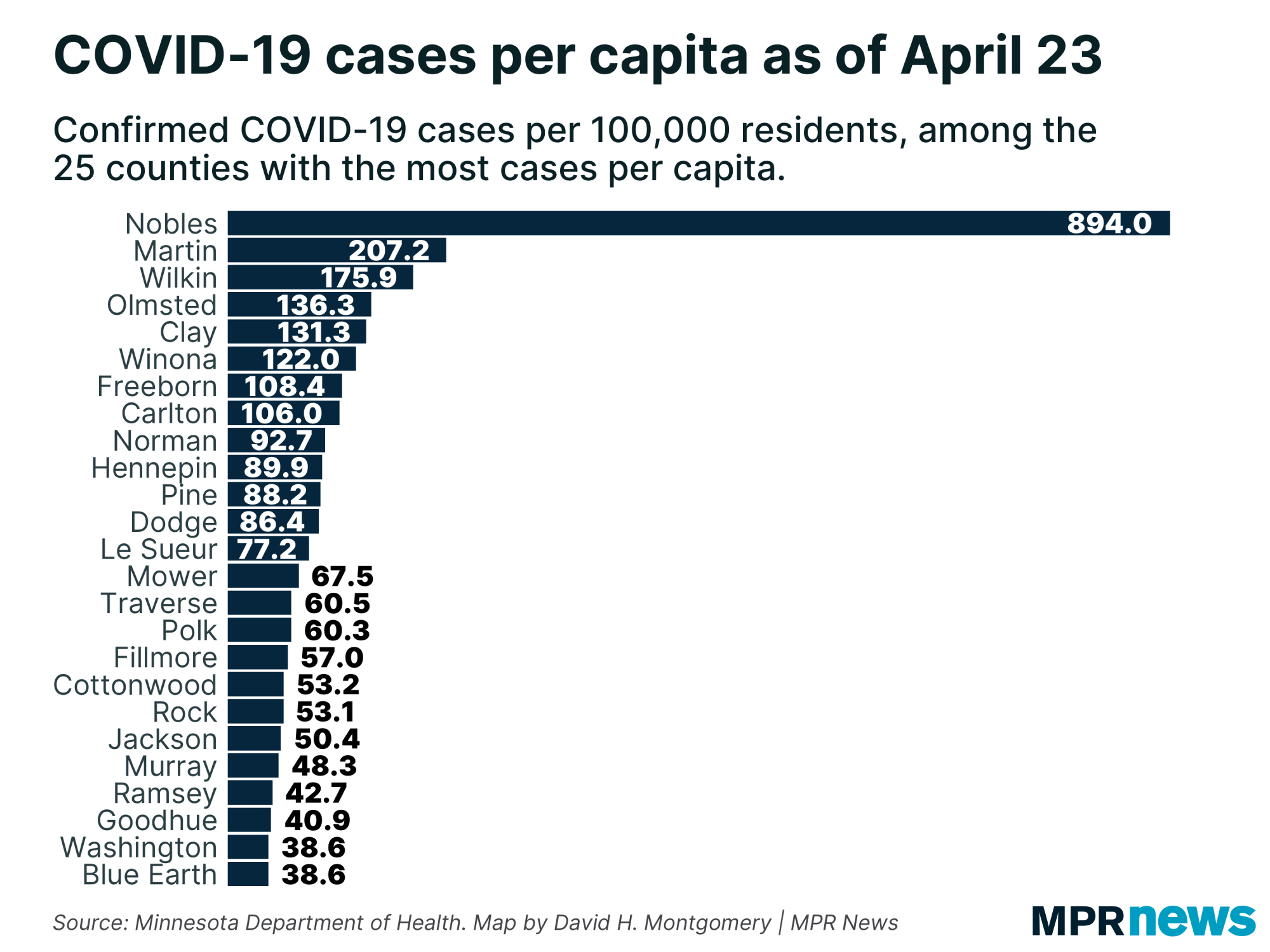 The latest counts of cases and deaths come a day after the governor unveiled a massive COVID-19 testing plan Wednesday in which the Mayo Clinic and the University of Minnesota would play key roles in testing 20,000 people daily.

For weeks, Walz has said that drastically increased testing would be critical to restarting parts of the economy. Two kinds of tests, ones that diagnose COVID-19 and others that see if a person has been exposed to the virus, are included in the plan, along with increased tracing.

While the plan would make Minnesota No. 1 in the nation for testing, Walz said testing alone would not end the crisis.

Testing in Minnesota and elsewhere has been hampered by supply chain issues and materials shortages. Minnesota has tested about 1,200 or so people daily as of late. That’s only about one-quarter of the testing Walz says is needed. 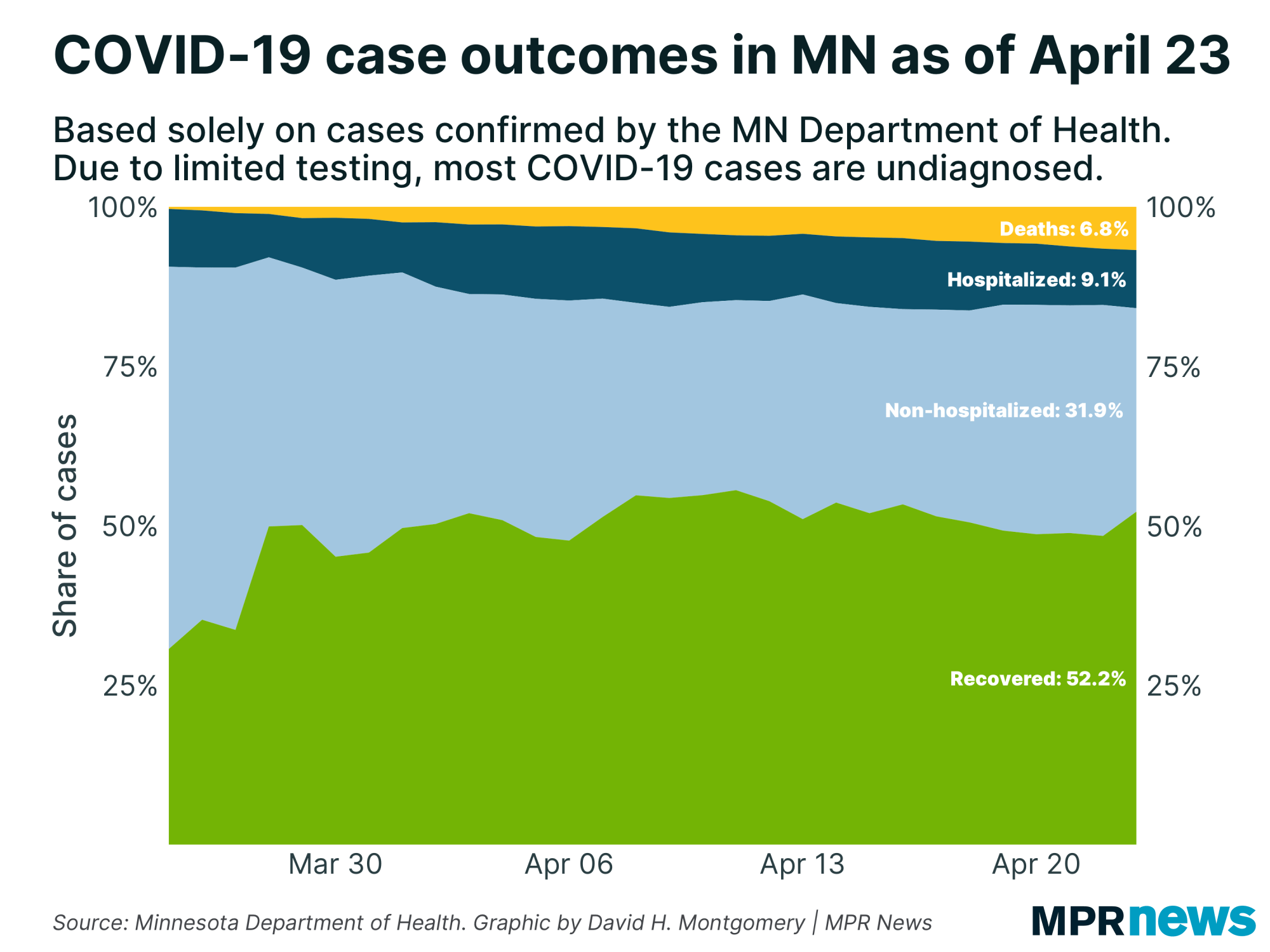 Health Commissioner Jan Malcolm said the U-Mayo plan would be ramped up quickly so that every Minnesotan with COVID-19 symptoms will be tested as soon as possible, with a focus first on vulnerable populations, including long-term care residents and the workers who care for them.

Communities of color, especially Native people, would also be a priority, along with “critical infrastructure” workers such as day care operators.

The testing push will be funded in part by $36 million from the COVID-19 Minnesota Fund. Money will also go to build a central laboratory driven by the U and Mayo to meet the expanded testing.

On Thursday, Malcolm told reporters that the goal is to test all Minnesotans with COVID-19 symptoms within the next four weeks.

Community alliance reassembles to battle COVID-19 fallout in north Minneapolis: The pandemic poses different challenges than the devastating tornado that inspired the formation of the Northside Community Response Team in 2011. African American community leaders say the crisis has forced them to figure out new ways of keeping their community connected, safe and healthy.

Patients weigh seeking care for conditions other than COVID-19: Thousands of Minnesotans have delayed surgeries and procedures because of COVID-19’s toll on the hospital system. But health officials are reminding Minnesotans they shouldn’t feel afraid to seek medical care.

For Minnesota restaurants, it’s about survival now: Thousands of restaurants in Minnesota are trying to survive, more than a month into an executive order that put their dining rooms off limits. Some are selling takeout food and, now, alcoholic beverages. The owners of a Stillwater eatery describe a stark conundrum they’re facing: Revenue is way down, but many of their expenses are not.

More Minnesota counties grant tax deadline flexibility: More Minnesota counties are giving property owners extra time to get payments in. Several counties, including Crow Wing, Hennepin, Olmsted and Winona counties, have decided to delay penalties or interest on tax payments made after the May 15 deadline, giving property owners until June, July or even later in various cases to catch up.

Health officials for weeks have been increasingly raising the alarm over the spread of the novel coronavirus in the United States. The disease is transmitted through respiratory droplets, coughs and sneezes, similar to the way the flu can spread.

Government and medical leaders are urging people to wash their hands frequently and well, refrain from touching their faces, cover their coughs, disinfect surfaces and avoid large crowds, all in an effort to curb the virus’ rapid spread.

The state of Minnesota has temporarily closed schools, while administrators work to determine next steps, and is requiring a temporary closure of all in-person dining at restaurants, bars and coffee shops, as well as theaters, gyms, yoga studios and other spaces in which people congregate in close proximity.

To read the original report and see related COVID-19 reporting, follow this link to the MPR News website.  https://www.mprnews.org/story/2020/04/22/latest-on-covid19-in-mn
Announcements