Minnesota’s stay-at-home order encourages getting outside, but how far away? Avid fly-fisher and guide Scott Thorpe of Minneapolis poses with a steelhead in the Brule River in northwest Wisconsin. Thorpe has fished the Brule every spring for 49 years, but chose not to fish this year because of the coronavirus outbreak.  Photo: Courtesy of Scott Thorpe

Every spring since 1970, Scott Thorpe has made a pilgrimage to the Brule River in northwest Wisconsin for the opening of the steelhead trout fishing season. It's a sacred tradition for him, and it started when he and his dad and brother discovered a beautiful pool in the stream, named “Maytag” after a family that owned a cabin nearby.

Every year, they’d get to the river around 2:30 in the morning, hike through the woods, flashlights piercing the blackness, and sit shivering in the cold for hours, waiting for the sun to rise, so they could claim the same prime piece of fishing real estate.

“I have made 49 consecutive opening days on that pool," said Thorpe.

This year, March 28 would have marked his 50th opening day on that same river, at that same exact fishing spot.

But he didn't go — because of the COVID-19 pandemic, he decided not to make the three-hour trek from Minneapolis.

"It's just not the right thing for us to be doing, spreading this out to the rural areas of the state,” he said. “I can live without my family tradition on the Brule opener. I can live without steelhead fishing for a season, if that's what it takes."

Outdoor activities like hiking, biking — and fishing — are explicitly allowed under Minnesota’s two-week stay-at-home order, which went into effect on March 27 as part of the state’s efforts to combat the spread of the new coronavirus. Driving for pleasure is allowed, too. But the order also restricts nonessential travel.

And in some rural areas, where people from elsewhere might travel to fish, hike, bike and recreate, local residents have cast a wary eye on visitors who might unintentionally carry the virus with them. Deciding exactly how far to travel during the state’s social distancing efforts is left to individuals — and the calculus is complicated.

Thorpe is an influential guy in the fly-fishing world. He’s a longtime guide who used to edit the newsletter of the Lake Superior Steelhead Association. He said other anglers have called him to ask if he was planning to fish. His friend Shawn Perich, who publishes an outdoor magazine called Northern Wilds, asked him to write a column explaining his reasoning.

“Even though I know I can manage an up-and-back [trip], buying gas with a credit card at the pump, etc., it is still not in the spirit of staying in place and it is not the example I want to set,” he wrote.

But other anglers he knows have landed differently on the question of how far a drive is acceptable for fishing. After all, they told him, fishing is explicitly allowed in Gov. Tim Walz’s stay-at-home order, as long as people maintain proper social distancing.

"There's always wiggle room,” Thorpe said. “You can justify traveling 200, 300 miles to go fishing because when you get there, there's nobody else there. And you're all by yourself. That's all true."

But Thorpe said there’s more to it than that — and that he made his decision based on what he thinks is the best way to navigate this unprecedented moment.

“I'm going to sit tight here because I think that's what I think is the best thing for society as a whole,” he said. “So, we get through this quicker."

The ambiguity in Minnesota’s stay-at-home order has left many outdoor-loving Minnesotans confused about what exactly is allowed — Is it OK to drive to a lake to fish? Or to a state park to hike? If so, how far? The order doesn’t explicitly say.

"You wait all winter for fishing and boating and things like that, and now that they're upon us, it's like, ‘do we dare drive to the lake?’" asked Perry Pickerign of North Oaks, who loves to hike, boat, fish and canoe with his family. He wants to be socially responsible, he said. But he would really appreciate more clarity from state officials.

Walz tried to offer some guidance at a news conference last week — but he acknowledged that the order has some ambiguity to it, and said the recreation allowances in it just don’t have a clear answer. And as the public health crisis continues to evolve, he said, so do the rules.

"I have got to keep people functioning the best they can and stay sane,” he said. “I know that if fishing is your thing, it's your passion. ... So, what I would just say to people is — please, know that we're still trying to evolve these [guidelines]. I make these decisions based on the best health guidance that's given to me, but also measuring those against the sustainability of a stay-at-home order that puts a lot of pressure on people."

Officials with the Minnesota Department of Natural Resources, the agency that’s responsible for the state’s parks, trails and outdoor recreation, say it's important to maintain not just the letter of the governor's stay-at-home order, but the spirit of it, which is meant to contain the spread of COVID-19.

And that, said spokesperson Kim Pleticha, means that people should stay close to home.

"We’re not supposed to be driving 100 miles to hunt or fish right now," she said. “We really do need to find ways to do that close to home. And if we can't do it close to home, then we really need to postpone it until this is over."

But Pleticha isn't willing to define just how close “close to home” is. People just have to use common sense, she said.

"We're not necessarily encouraging people to pack up the family and go to the nearest state park because for many people, the nearest state park might be 50 miles from the house,” she said. “That is not in keeping with the governor's order. We want people to be able to get outside, exercise, maintain their physical and mental health, but do it as close to home as possible."

State parks remain open, but visitor centers and campgrounds are closed until May 1, and events have been canceled. DNR officials are also reminding people that when they are outdoors, they should still keep 6 feet away from people and maintain other social distancing practices.

Some state parks have seen big crowds since the stay-at-home order went into effect.

“Don’t go if it's crowded. We want people to maintain that 6-foot social distance,” Pleticha said. “And you really can't do that when we have 300 cars in the parking lot of the state park.”

The debate over what’s exactly allowed outside in Minnesota right now, and what isn’t, has spilled over into social media.

You've got half the people saying [that we should] just stay at home, do your outdoor activities from your home,” said Joe Maijala, who lives outside Grand Rapids, Minn.

“Other people say, ‘Well, you can drive.’ So, what's to stop me from driving two hours to Gooseberry Falls and going hiking and then coming back?” he asked.

Maijala said he agrees that getting outdoors for fresh air is important, especially now. But people should do that from their homes, he argued. He’s concerned about health care systems in rural parts of the state lacking the capacity to deal with an influx of COVID-19 cases.

That’s one of the main reasons several rural counties have encouraged people from outside the area to refrain from traveling there during the pandemic — even if they own cabins or second homes there. Cook County in far northeastern Minnesota and Bayfield County, where the Brule River is located in northwestern Wisconsin, have both issued advisories asking visitors to stay away — for now.

Some cities, including Minneapolis and Duluth, have tried to make it easier for residents to get outdoors close to home by closing off some roads to traffic to allow more space for social distancing for walkers, runners and bikers. 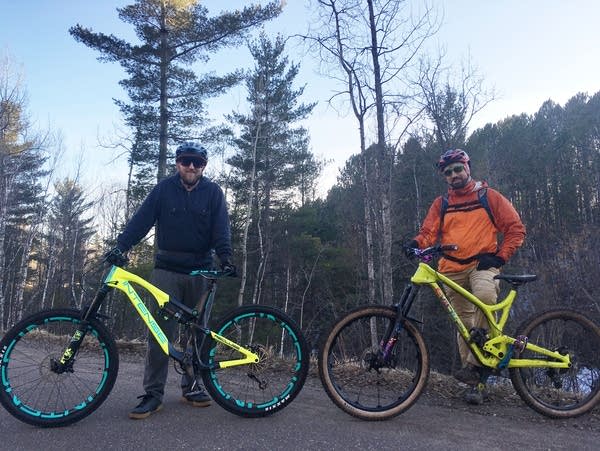 Sam Bergstedt and Wyatt Gruben go for a bike ride in Duluth last week on a section of Seven Bridges Road the city had closed off to traffic to allow for more social distancing for bikers and walkers.  Photo: Dan Kraker | MPR News

Last week, Wyatt Gruben and his friend Sam Bergstedt went for a bike ride on Seven Bridges Road alongside a rushing Amity Creek on the eastern edge of Duluth. The two had been forced to cancel a mountain bike trip to Arkansas this spring because of the coronavirus outbreak.

Gruben said since the stay-at-home order went into effect, he’s made it a point to hop on his bike, not in the car.

"Normally, I'd go up to shore on the weekend, go for a hike, whatever it may be,” he said. “But I've … not been doing that because of this."

It is admittedly very tough for Minnesotans who cherish outdoor traditions like fishing and hiking to give them up — even for the time being.

Fly-fisher Scott Thorpe is used to fishing 200 days of the year. This spring, he’s given up his trip to the Brule, and he’s also forgoing his annual journey to Duluth, up the North Shore, and into Canada, fishing for steelhead in the many rivers that pour into Lake Superior.

But Thorpe is also an avid reader of World War II history. His father was wounded in Germany where he fought as a combat infantryman. And he wasn’t able to hunt or fish from 1943 through 1946.

So what he’s giving up “is not that big of a sacrifice,” Thorpe said. “It's just fishing.”

To read the original story and see related articles, follow this link to the MPR News website.  https://www.mprnews.org/story/2020/04/07/stay-at-home-order-encourages-getting-outside