'There was a guardian angel watching over me': Winnipeg man survives bear attack at Kenora cottage Dave Schwab, a Winnipeg man, says he and his wife Dorothy love visiting their cottage near Kenora, Ont., in the fall, because it's more tranquil. But that was not the case last weekend, when the 69-year-old man was attacked by a black bear.

"I think there was a guardian angel watching over me," Schwab told CBC News.

"A biologist that visited me [in hospital] said that this had all the characteristics and behaviours of a predator. He was out for a meal."

Schwab said that he was walking by himself along Rice Lake, where the cabin is situated, to check on contractors doing some work for him.

On his way back to the cottage, Schwab was walking along the main access road when he spotted a bear walking about 100 metres ahead of him.

"I began to shout and make lots of noise, as I've always been doing when I see a bear," he said.

A few moments later, when Schwab was about 500 metres from his cottage, he saw the black bear trudge into the bushes toward nearby power lines. He figured the bear was gone, but continued to make noise just in case.

Schwab said he was carrying a birch branch that was roughly 1.3 metres long, and started waving it around.

Then the bear came back. It left its spot in the brush and started following Schwab.

"I walked backwards, and was waving and yelling, telling him to leave," he said. "He just kept coming."

Schwab said the bear — which Schwab was later told weighed over 90 kilograms — was close enough that he felt uncomfortable bending down to pick up a rock to throw at it. He worried making himself small might entice the bear to attack.

"[The bear] circled behind me," Schwab said. "He was blocking the way I was going, then he just came walking towards me. He wasn't running.

"I don't remember hearing any sounds from him… and then he moved more quickly. When he was about two feet from me, I backpedaled, lost my balance and fell on my butt."

Schwab said it was "miraculous" that, when he fell, his knees came into his chest, and he rolled to his side, protecting his stomach.

While on the ground, the bear slashed and bit into Schwab's left thigh. 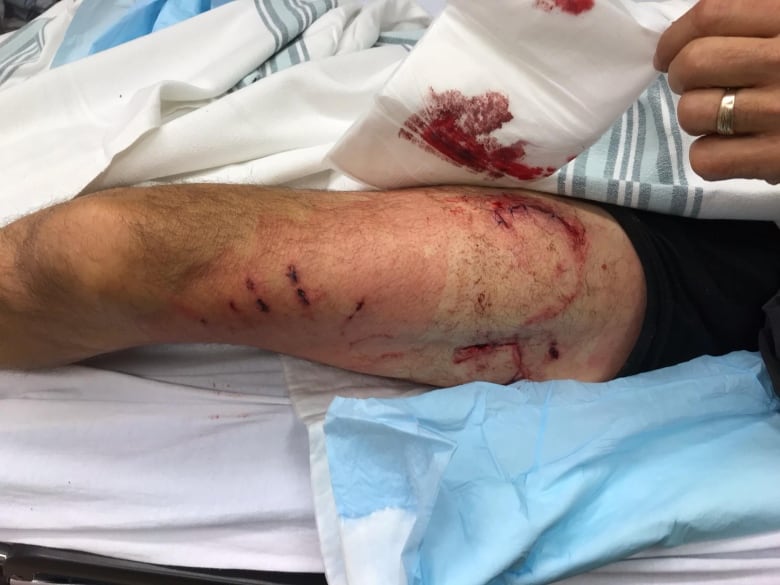 Dave Schwab is recovering from injuries sustained from a bear attack that occurred near his cottage last weekend. Photo: Submitted by Dave Schwab

Schwab believes his fight-or-flight instinct kicked in, allowing his brain and body to react quickly in the fight to survive.

As the bear's teeth dug into his leg, Schwab realized the bear's chin was within reach.

"I cannot tell you why I did it, but his head was right there, so I just reached up with my thumbs and I pushed up under in the soft spot under the neck, and he let go."

But the bear wasn't going down that easy. It quickly latched onto the man's arm.

With his leg now free, though badly injured, Schwab kicked the bear and it got off him.

"[The bear] just moved to the side of the road," Schwab said, adding that he grabbed the birch branch and moved backwards towards the cabin.

"He started coming towards me again, so I took the birch branch that I had and cracked it over his snout," Schwab said. "He retreated again to the side of the road."

Schwab said the bear approached a third time, but he kicked it underneath the chin. The bear retreated to the bushes but kept walking parallel to Schwab.

Schwab said he threw a rock at the bear, which struck the animal. But it was undeterred and continued marching along with the man.

"At this point, I'm still quite a distance from my cabin," Schwab said, adding he that has no idea how long he has been with the bear. "I began to yell for help — hoping, praying, that the contractors would hear me."

Then, the workers' truck sped toward him. 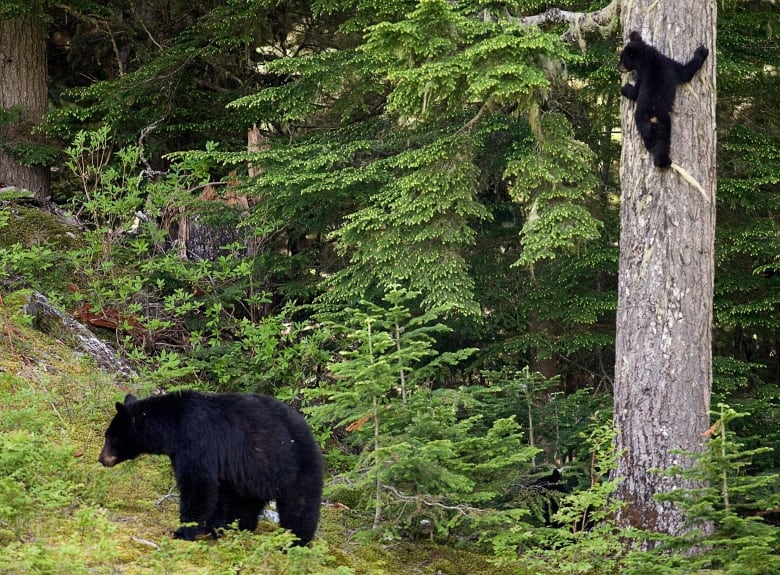 The bear that attacked Schwab was over 200 lbs. Photo: Jonathan Hayward/Canadian Press

"They just hauled me in, and took me off to Kenora," Schwab said.

"If these guys hadn't come or hadn't heard me, I don't know if I would have made it back to the cabin.

"I'm alive, I believe, because of them."

Schwab added that, once he was in the truck, his body was spent. He said he could only sit there in a daze.

The cottage has been in the family for over 60 years, Schwab says. To his knowledge, this is the first time anyone has experienced anything like what transpired last weekend.

A bear believed to be the one that attacked Schwab was put down.

Schwab sustained significant damage during the multi-round bout with the black bear.

He has scratches from the bear's claws and puncture wounds from its teeth — all of which required stitches and rabies shots. His main injuries were in his left thigh, where he sustained muscle damage. In fact, Schwab said some muscle was missing.

Schwab underwent surgery in Kenora. He said after having a dream that he was going through a maze, he was convinced he'd died. When he opened his eyes and saw people in scrubs, he knew he was ok.

Schwab is currently using crutches to move around and has an appointment Thursday with an orthopedic surgeon from Health Sciences Centre. He is visiting a hospital or clinic every day to have the dressing changed and to check the wounds for infection.

Schwab considers himself "very bear aware," as an experienced hiker both in Manitoba and the Rockies. But this ordeal has given him a new respect for wildlife.

"Sometimes we take wild animals for granted," Schwab said. "They're wild animals and they're doing what animals do in their environment.

"This bear, he was just doing what he would do to get a meal to survive the winter. So we just have to have a healthy respect."

Schwab told CBC News that he and his wife Dorothy won't go for a walk without bear spray from now on.

To read the original article and see related reporting, follow this link to the CBC News website.  https://www.cbc.ca/news/canada/manitoba/bear-attack-survivor-1.5303835
Announcements