Westbound traffic travels along I-94 near White Bear Avenue in St. Paul. Along with a new ban on holding a cell phone while driving, Minnesota has an updated ‘slowpoke’ law.
Photo:  Jeffrey Thompson | MPR News 2013

Authorities patrolling Minnesota’s roads have more authority to go after drivers believed to be clogging traffic on freeways and state highways with more than one lane in each direction.

But the top state’s highway cop says his troopers will still have a greater focus on citing lead-footed motorists.

Starting Thursday, there will be an updated “slowpoke” law on the books. Here’s a bit more on what it’s about and what to expect. 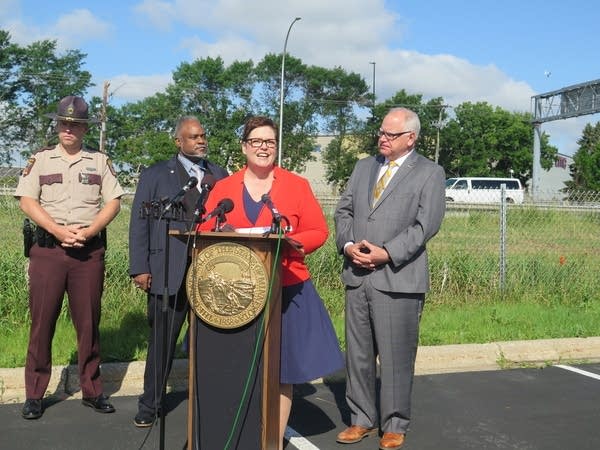 That’s in the eye of the beholder. There isn’t any set below-speed-limit amount that will put someone afoul of the law. Rather, it’s a subjective standard.

“This law says when practicable, move over and allow vehicles to pass. It’s that simple,” explained Col. Matt Langer, chief of the Minnesota State Patrol.

What driving behavior is being addressed?

The law, which replaces one already in place, is designed to keep the left-most lane open for passing under most circumstances. The law says that people “proceeding at a speed that is sufficiently low as to create a traffic hazard” must move to the right when possible.

What exceptions are there?

A driver will be cut some slack if they’re in the left lane to give room on the right to emergency vehicles or shoulder obstructions. They’ll also be permitted to stay put if they’re preparing to exit on the left or turn onto a road or driveway on that side. Special lanes designated for specific type of traffic — such as high-occupancy vehicle lanes — also don’t count.

And don’t worry, it won’t mean that there’s an empty lane during rush hour because congestion is another circumstance where discretion will be applied.

Will a lot of tickets be handed out for this?

Probably not. The State Patrol, for one, isn’t planning a special campaign to cite slower drivers. It wants to educate them on the law, but Langer said enforcement won’t rise to the level of combating distracted driving, excessive speed or other unsafe conditions that can put lives at greater danger.

The other big traffic safety law about to set in — making it illegal to hold a cellphone while operating a vehicle — will have a much bigger emphasis out of the gate.

Are speeders being given priority over those abiding by the posted limit?

No. In fact, Langer of the State Patrol expects drivers going over the limit to still be a greater focus for law enforcement.

“Those are the motorists we’re going to be looking for, that we always are looking for. We’re definitely focused on speeding because speeding is one of the leading contributors to fatal and injury crashes and property damage crashes,” he said. “That person holding up traffic in the left lane can cause problems, can cause frustration, can lead to aggressive driving, but isn’t the contributor toward fatal and injury crashes.”

As Gov. Tim Walz put it during a news conference Monday, “It’s not a free-for-all to go as fast as you can. It’s simply to make sure that the flow of traffic works in the most efficient and safe manner.”

If I'm doing the speed limit, do I still need to move over for someone closing in on my bumper?

The State Patrol suggests just moving over to make way. Langer said it’s not worth the risk or stress to stay in that situation. It’s possible the tailgater will catch the attention of a local officer or one of the Minnesota State Patrol’s 600 troopers out on the highway any given day. Those motorists will be likely to get the ticket instead, he said.

John Harrington, commissioner of the Department of Public Safety, said it all comes down to common courtesy on shared roadways.

To read the original article and hear an audio report of this story, follow this link to the MPR website.  https://www.mprnews.org/story/2019/07/29/drive-right-law-directs-slower-motorists-to-move-over