Spring flooding is becoming a major threat along rivers in the Midwest and parts of the Northeast, thanks in part to a still-growing snowpack that is pushing toward March records in some areas.

According to the latest long-range outlooks from the National Weather Service River Forecast Centers, there is at least a 50 percent chance of major flooding some time through May at 132 locations across the U.S., primarily in the nation's midsection, but also in parts of northern Maine.

The combination of melting snow, additional rain and snow and rising temperatures all play crucial roles in determining how widespread and severe spring river flooding is from March through May in the Midwest and Northeast.

Here's a rundown of the factors we'll watch.

A number of locations in the upper Midwest, not to mention parts of the mountain West, had their snowiest February on record, while a healthy snowpack has also built up from the Adirondacks of upstate New York into northern New England.

As of March 7, Minneapolis-St. Paul and Fargo, North Dakota, reported 18 inches of snow on the ground, while Caribou, Maine, had a whopping 45 inches of snow cover.

At the time of this column, Winter Storm Taylor was expected to dump yet more snow in the northern Plains and upper Midwest, including the Twin Cities and Fargo, North Dakota, while also blanketing upstate New York and northern New England with modest snowfall.

Taylor could push snow cover in these areas to near-record depths for early March.

More important for flood risk, however, is how much water is contained in the snowpack, which is released once it melts.

According to a flood outlook released Thursday by the NWS in Chanhassen, Minnesota, "The amount of snow water equivalent in this snowpack is in the upper 10 percent of historical records over a widespread area."

A NOAA analysis estimated at least 4 inches of water is currently locked in the snowpack over a wide swath from the northern Plains to the northern Great Lakes and northern New England. 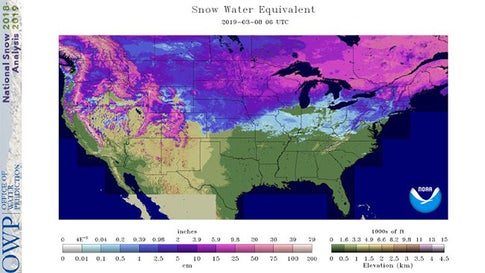 Estimated water content of the snowpack over the U.S. on Mar. 8, 2019. Parts of the northern Plains, upper Midwest, northern Great Lakes, and northern New England were estimated to have at least 4 inches of water contained in the snowpack.
(NOAA/NOHRSC)

That may not sound like a big deal, but consider what would happen if an area picks up 4 to 12 inches of rain over the span of a few days. That would likely trigger significant flooding.

One of the reasons we're more concerned about spring flooding this year is how wet it has been since last summer.

Parts of the East, Ohio Valley, upper Midwest and southern Plains had their wettest fall - September through November - on record in 2018, according to NOAA's National Centers for Environmental Information. Except for the Florida peninsula, much of the eastern two-thirds of the country was much wetter than average in the fall.

That wet fall followed one of the wettest summers on record in parts of the mid-Atlantic states and Midwest and Plains.

That wet drum beat marched on through what was the nation's wettest winter - December through February - in records dating to 1895.

Precipitation rankings during summer (first image), fall (second image) and winter (third image) 2018-19 in the U.S. The darkest green areas indicate it was the record wettest summer, fall or winter in those locations.
(NOAA/NCEI)

Given all this precipitation, it should be no surprise that soil moisture is about as high as it can get this time of year.

According to an analysis by NOAA's Climate Prediction Center, soil moisture values over vast areas of the Plains, Midwest and East are in the 99th percentile for this time of year. In other words, these soil moisture levels are in the top 1 percent of all values for early March. 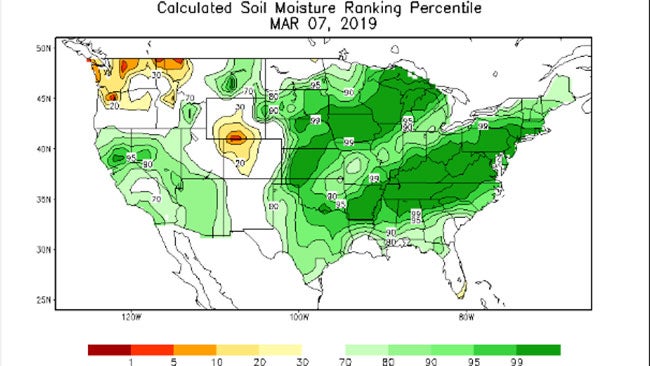 U.S. soil moisture percentiles on Mar. 7, 2019. Areas in darkest green have soil moisture values higher than 99 percent of all values on record for March 7.
(NOAA/CPC)

In some of these areas, the soil contains over 4 inches more moisture than average for this time of year, so the ground cannot absorb much rain or snowmelt before runoff into rivers and streams occurs. 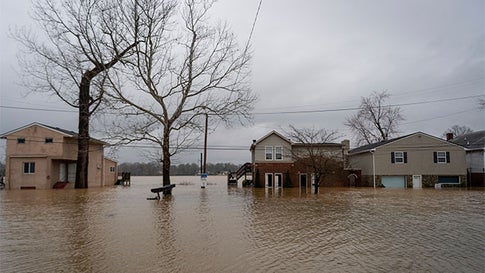 A neighborhood is inundated by flooding from the Ohio River, Tuesday, Feb. 12, 2019 near Louisville, Kentucky.  AP Photo/Bryan Woolston

Other important factors that can determine the severity of flooding remain uncertain.

The latest three-month outlook from NOAA's Climate Prediction Center suggested a wetter-than-average period through May was possible from the Rockies to the South to the mid-Atlantic states, but no clear wetter or drier signal in the rest of the Midwest or Northeast.

A heavy rain event during a period of snowmelt, when rainwater plus meltwater magnifies flooding of rivers and streams, is certainly possible through spring.

A sharp, rapid warm spell can melt snowpack quickly, sending a large volume of meltwater into rivers and streams.

Paradoxically, the longer the cold persists into spring, preserving the heavy snowpack, the greater the chance of an abrupt, rapid warm spell once the cold pattern finally exits.

This flood risk also becomes greater when a snowstorm occurs later in the spring, in April or May. When temperatures rebound to more typical April or May values, the newly deposited wet, heavy snow can vanish quickly, sending rivers and streams rising.

There are still a lot of unknowns, but the factors spelled out here have already loaded the dice toward a higher spring flood risk for some in the Midwest and Northeast.

To read the original article and see related reporting, follow this link to The Weather Channel.  https://weather.com/safety/floods/news/2019-03-08-major-spring-flood-threat-midwest-new-england-marc...