Dan Jasper of Jasper Guide Services measures the thickness of the ice in a hole he cut on Lake Minnetonka in 2016. Photo:  Elizabeth Dunbar | MPR News 2016

While Minnesotans have a long history with ice, there are still stories every year of people who were overconfident about the strength of the ice below them and unprepared to respond when it broke. This is the time of year when bad things happen.

There were six deaths on the ice in 2017 — five of them in late November and early December, when the ice was not thick enough to take on weight, according to the DNR.

"There's a lot more fishermen going out, ATVs, snowmobiles," said Thomas, "so it's very important that you're safe when you're out there. I think the biggest mistake people make is getting too eager to get out there to catch some fish. That's when people get in trouble and fall through, or they bring out vehicles too early."

At Holland Lake in Lebanon Hills Regional Park, Thomas demonstrated the basics of being smart on the ice.

Trusting your gut is not the best path on the ice. To that end, Thomas demonstrated the use of an auger and tape measure to drill a hole in the ice and measure its thickness.

Thomas also said that ice thickness will change depending on where you are, and that it's best to measure every 150 feet or so.

"Here we have about 6 inches of ice," he said, gesturing at the hole he just drilled. "But just over there, which is only about 10 yards behind me, you only have 5 inches of ice."

The DNR's ice thickness guidelines call for at least 4 inches of new, clear ice beneath your feet as you walk. The number goes up as vehicles like snowmobiles, cars and trucks come into play. 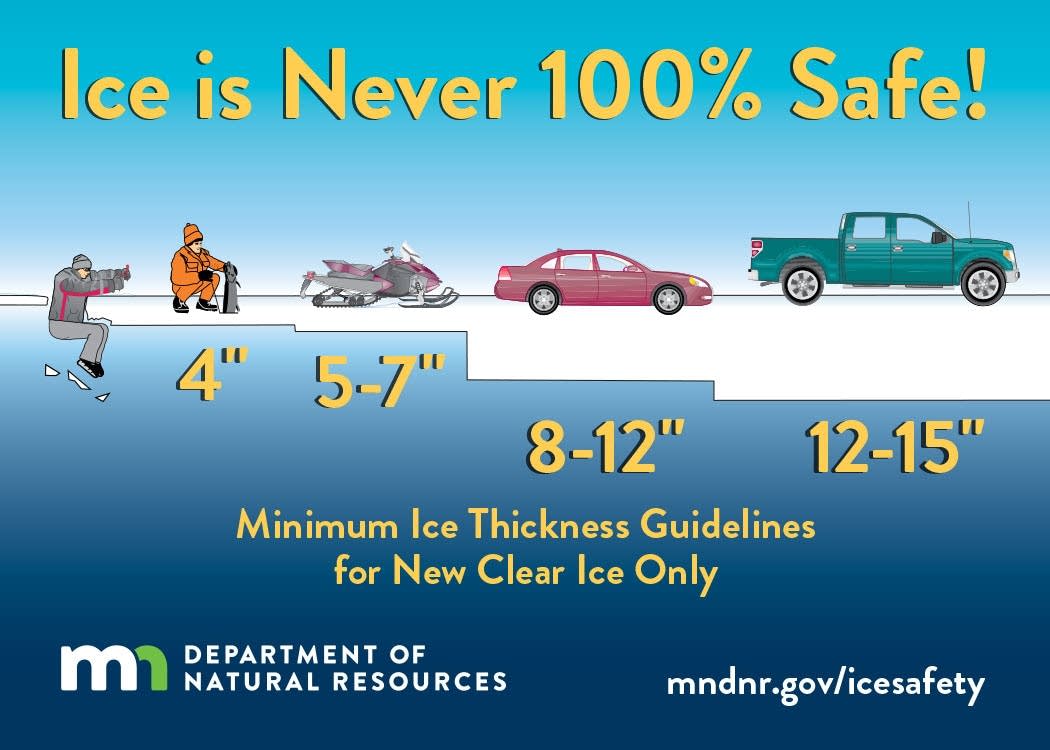 Temperature, snow cover, currents, springs and rough fish all affect the relative safety of ice. This graphic shows the minimum thickness ice should be before someone should venture out on clear new ice. White ice or "snow ice" should be doubled the thickness. Courtesy of Minnesota Department of Natural Resources

Thomas also talked about the importance of knowing your equipment, and how it could be more dangerous if you used them incorrectly.

"Because if a truck or car goes through the ice, and you're stuck in there with your float coat, you're going to float to the surface, and it's going to be harder to get out," he said.

Know what to do if the ice gives way

Thomas concluded with the ice picks, and what to do if you do fall in the water. The main thing? Stay calm. The goal is not to stand but to drag yourself onto the ice while spreading your weight out as much as possible. Pull yourself and cover the most surface area to prevent the ice from cracking.

"It's going to be scary," he said. "Hopefully you'll have your ice picks with you, and you can pull yourself out of the ice."

To read the original article and see related stories, follow this link to the MPR News website.  https://www.mprnews.org/story/2018/12/07/minnesota-winter-thin-ice-advice-warnings